A thug has viciously punched a mother to the ground during a heated row.

CCTV footage shows the Muslim woman being knocked to the ground in Tuebrook, Liverpool, on Easter Sunday.

The attack, which Merseyside Police are treating as a hate crime, shows the aftermath in which the woman and her sons were set upon by males wielding scaffolding poles.

The incident is thought to have erupted after issues with youths playing football in the street, causing damage to the car and window.

CCTV footage shows the horrific moment a thug punches a Muslim mother knocking her to the ground during a row in Tuebrook, Liverpool on Easter Sunday

Images show the woman walking in front of a silver car, moments later inn the melee a thug can be seen punching the mother, who is in her 40s.

The woman lands face down on the ground, where she is left until one of her sons is able to help her.

Police has confirmed officers were called to reports of an ‘altercation involving a number of people in the street’.

They reported that ‘during the incident, a group of youths had caused damage to a car and the window of a property, before a woman in her 40’s was assaulted by a male’. 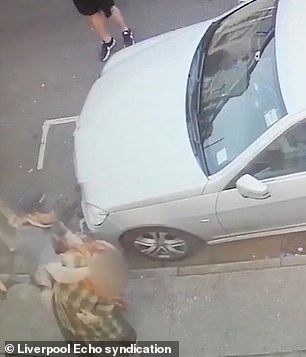 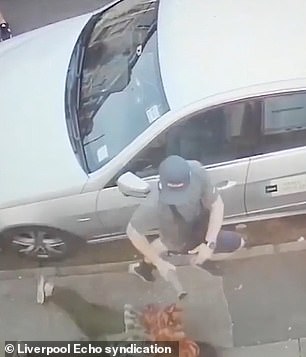 Video shows the thug knocking down the mother to the ground. He and the other males can also seen wielding scaffolding poles 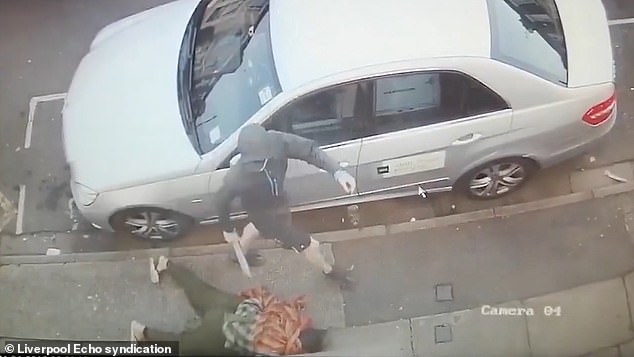 The woman was taken to hospital for treatment for a facial injury.

Both have been released on conditional bail and a police spokesman said an investigation is ongoing. 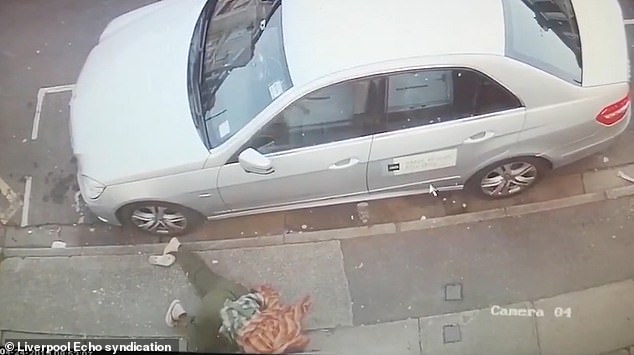 The woman was taken to hospital for treatment for a facial injury. Merseyside Police said they are treating the incident as a hate crime

The victims, who asked not to be identified, urged anyone with details about those involved in the incident to contact police.

They believe they were targeted because they are from Pakistan.

Community Inspector Andy Gardiner said: ‘This is a shocking incident and we are still working to piece together the exact circumstances, however to discriminate against anyone in this way is appalling behaviour and hate crime of any kind will not be tolerated by Merseyside Police.’