Two homeless people were set on fire by a thug who poured a flammable liquid over a mattress as they sheltered under a bridge in Argentina.

Pictures of the horrifying attack showed the man pouring liquid on a mattress, setting the bedding alight and then throwing the burning container at another man.

One of the homeless men, who seemed to be sleeping and had not noticed the intruder, leaped up in horror and fled for safety when he realised what was happening.

The violent assault appears to have been filmed by the attacker’s associate, who was driving a car.

One of the victims suffered burns to his face while the other is unaccounted for. 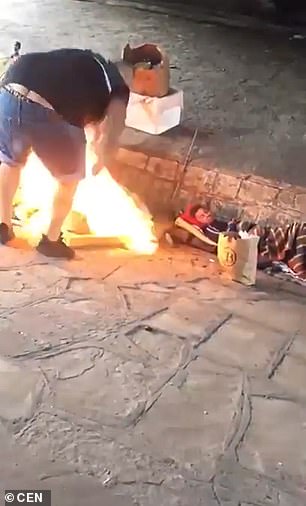 Approach: The heavily built thug sneaks up to the homeless people sleeping under a bridge in Argentina, pours a container of liquid over a mattress and lights a fire

The driver is seen pulling up under the bridge before the thickset thug gets out and sneaks up to the homeless men.

After pouring the liquid with his left hand, he ignites the fire with his right, tosses the burning container towards one of the men and jogs away.

One of the homeless people scrambles for safety and manages to reduce the flames but the other seems slower to react as the car drives off.

The attack took place under a bridge on Avenue General Paz, in the neighbourhood of Mataderos, in the Argentine capital Buenos Aires.

The incident is said to have happened three weeks ago but has only recently been reported in local media. 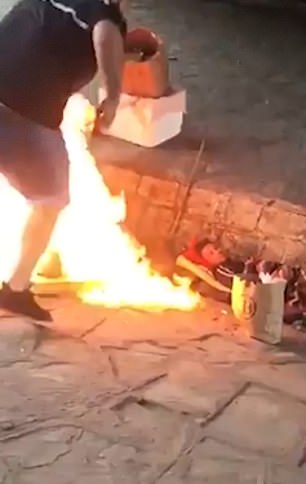 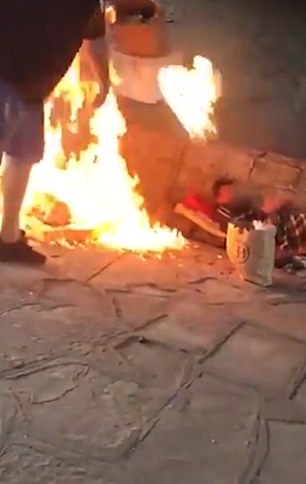 In flames: The man turns away from the fire and lobs his burning container at one of the homeless men, who suddenly realises what is happening after he was apparently asleep

One of the victims has reportedly been identified by police as a 38-year-old, who walked to a local hospital and was treated for burns to his face and arms before being released.

The second victim has been missing since the attack and has not yet been identified.

A local mechanic told reporters he believed people who ‘cannot tolerate people sleeping in the street’ were behind the attack.

He added that the victims, who he said were Venezuelan, were ‘good people’ who ‘did not hurt anybody’.

A police investigation has been launched and police are working to found out if the aggressors knew the victim.

No arrests have been reported and the investigation is ongoing. 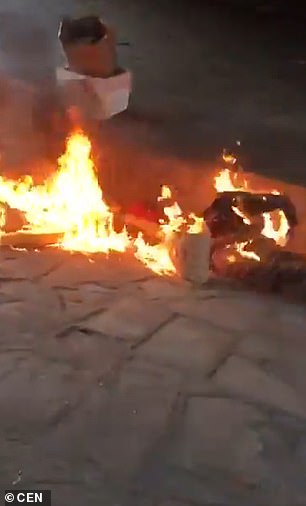 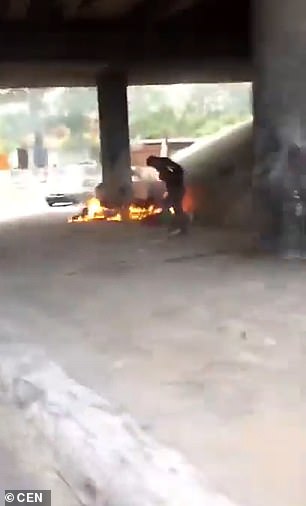 Horror: One of the men leaps up in desperation as he tries to put out the flames, watched by the driver – seemingly an associate of the attacker – who was filming the scene