A man who raped a nurse while threatening to chop her head off with a machete has been jailed for 10 years.

The victim, a 57-year-old nurse, was walking her dogs in a remote community in the Northern Territory when she was attacked by the 31-year-old man in January.

On Friday the man appeared in the state’s Supreme Court where he pleaded guilty to raping and threatening to kill the woman.

The victim, a 57-year-old nurse, was walking her dogs in a remote community in the Northern Territory when she was attacked by the 31-year-old man in January (pictured is the machete)

‘For many people in her position it’s not just a job, it’s about giving something and helping the people there. They need to feel safe or else they won’t come,’ he said.

The accused’s lawyer Marty Aust, told the court that his client had been up all night smoking cannabis and left home in a ‘rage’ following an argument before he attacked the nurse.

‘This rage manifested itself in a completely horrendous, horrific piece of offending,’ he said.

Justice Jenny Blokland described the horrific attack as ‘terrible and serious’ before sentencing the man to 10 years’ prison with a non-parole period of seven years.

She noted his history of violent offending including his jail stint after spearing his cousin, the publication reported.

Justice Blokland said the attack and threat to her life has ‘deeply affected’ the woman who had been a nurse for 37 years.

‘You have to learn to respect women, you cannot offend in this way,’ she ended. 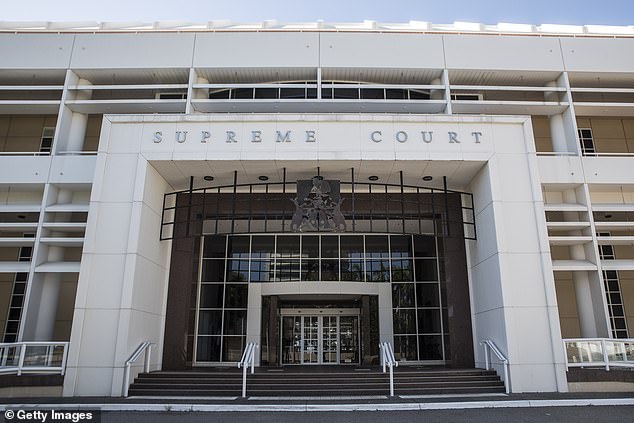 The attacker appeared in the Supreme Court (pictured) where he pleaded guilty to rape and threatening to kill the nurse. He was sentenced to 10 years’ jail