Thunderstorms in Alaska could TRIPLE by the end of the century due to climate change, experts warn

Climate change has made its way into Alaska, causing mudslides, wildfires and record-breaking temperatures – but two new studies have added thunderstorms to the list of effects.

The National Center for Atmospheric Research (NCAR) warns that if greenhouse emissions are not curbed the number of thunderstorms will triple later this century.

The increase of these violent storms would spark widespread flash flooding, landslides and lightning-induced wildfires.

The studies found that sea ice around Alaska could soon give way to open water and create a substantial amount of moisture.

The moisture will combine with warmer temperatures due to greenhouse emissions, which will form the perfect mixture to fuel storms during the summer months.

Climate change has made its way into Alaska, causing mudslides, wildfires and record-breaking temperatures – but two new studies have added thunderstorms to the list of effects

Alaska seems to have been lost in the mix when it comes to climate change, but data shows it is expected to warm about 11 to 16 degrees Fahrenheit by the end of the century if society does not reduce greenhouse gases.

In Anchorage, Alaska’s largest city, warmer temperatures and drier conditions in recent summers have lengthened the fire season across the entire state.

And last year, over half of the fires in Alaska were started by lightning.

The two studies were conducted by NCAR and a research team led by scientists at the Paris Sciences and Letters University. 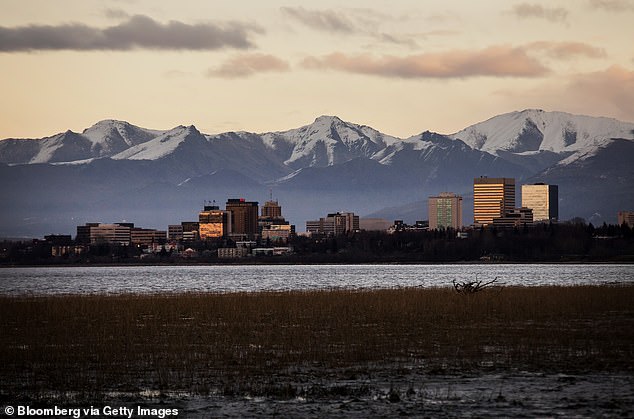 In Anchorage (pictured), Alaska’s largest city, warmer temperatures and drier conditions in recent summers have lengthened the fire season across the entire state. And last year, over half of the fires in Alaska were started by lightning

Together they showed that the sea ice around Alaska is on track to largely give way to open water in the warmer months, creating an ample source of moisture.

The substantial amount of moisture plus warmer temperatures from greenhouse emissions is the perfect combination for intense summertime storms.

Basile Poujol, a scientist with the Paris Sciences and Letters University and lead author of both studies, said: ‘We suspect that the increasing number of thunderstorms might have significant impacts, such as amplifying spring floods or causing more wildfire ignitions.’ 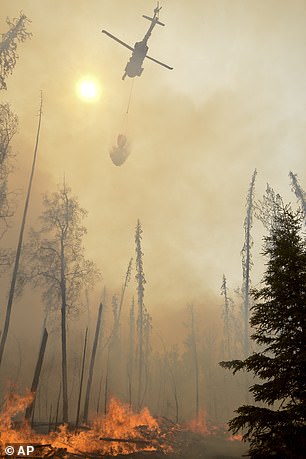 The increase of these violent storms would spark widespread flash flooding, landslides and lightning-induced wildfires

‘Further studies are necessary to determine whether these impacts are likely to occur and, if so, their potential effects on ecosystems and society.’

However, the team also notes that the destructive events could be avoided simply by curbing emissions.

For the first paper, which focused on how Alaskan thunderstorms may change later this century, researchers compared computer simulations of the state’s current-day climate with what is expected at the end of the century.

The team used a storm-tracking algorithm and the NCAR-based Weather Research and Forecasting (WRF) model to create simulations of Alaska’s weather and climate.

The results showed that thunderstorm frequency south of the Yukon River increased from about once a year to every month during the warm season.

Hourly rainfall rates increased noticeably, ranging up to 37 percent higher in the cores of storms.

However, thunderstorms were found to appear in places they are not know to hit, such as the North Slope and West Coast.

The second paper focused on the reasons for the increase in thunderstorms.

The team applied  applied a specialized model to trace air parcels back to their sources using the WRF, along with other models that created a simulated atmosphere over Alaska, including temperature, water vapor and seasonal sea ice cover.

NCAR scientist Maria Molina, a co-author of the second study, said: ‘Our goal was to determine the sources of moisture and associated changes that would fuel such a significant increase in thunderstorms over Alaska.’

The results showed that moist air masses from ice-free regions of the Gulf of Alaska, Bering Sea and Arctic Ocean will be an abundant fuel for storms.

The warmer atmosphere will experience increasingly powerful thunderstorms that are more likely to organize and form large-scale clusters, increasing the potential for heavy rain and lightning.

‘The potential for flash flooding and landslides is definitely increasing, and the Arctic is becoming way more flammable,’ Prein said. ‘It’s hard to grasp what the ecological changes will be in the future.’