Thylane Blondeau ensured it was her time to shine on Wednesday evening as she joined Jasmine Tookes and Nina Dobrev at a glamorous party on behalf of watch manufacturer Tag Heuer.

The young model was accompanied by a host of special guests at the Paris Fashion Week event as the French capital winds down from several days of back-to-back haute couture runway shows.

Greeting onlookers outside the venue, Thylane, 21, caught the eye in an elegant thigh-skimming black dress with a distinctive off-the-shoulder detail as she made her way into Place Vendôme.

Here they come: Thylane Blondeau ensured it was her time to shine on Wednesday as she attended a glamorous party on behalf of watch manufacturer Tag Heuer

In good company: She was joined by model Jasmine Tookes (L) and actress Nina Dobrev (R) as the party got underway in the French capital

She added to the look with a pair of strappy peep-toe heels, while a tasteful black clutch appeared to be her only notable accessory.

The French model – famously titled ‘the most beautiful girl in the world’ following her emergence in 2007 – ensured her delicately proportioned features stood out by opting for male-up selected from a subdued colour palette. 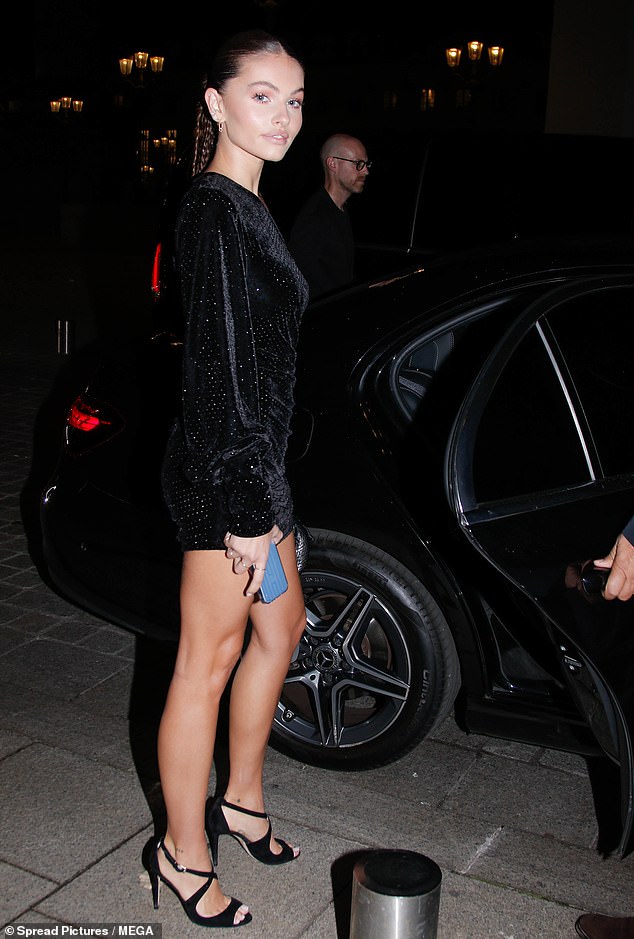 Looking good: Greeting onlookers outside the venue, Thylane caught the eye in an elegant thigh-skimming black dress with a distinctive off-the-shoulder detail 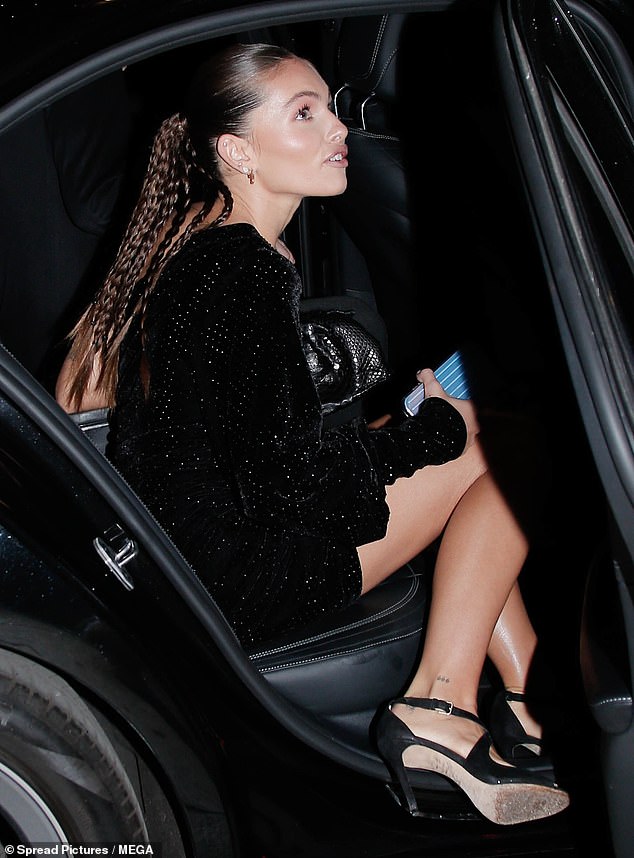 Don’t mind me: But Blondeau was hard to miss as she climbed into a waiting car later that night

The American model, 31, completed the look with a pair of glittering heels, while her black hair was conventionally styled with a simple centre-parting.

Elsewhere actress Dobrev exuded elegance in a sequined black blazer and matching evening dress as she posed for photos after making her way inside.

The Vampire Diaries star, 33, drew further attention to her look by opting for a vibrant later of rich red lipstick, in contrast to her outfit’s subdued colour scheme. 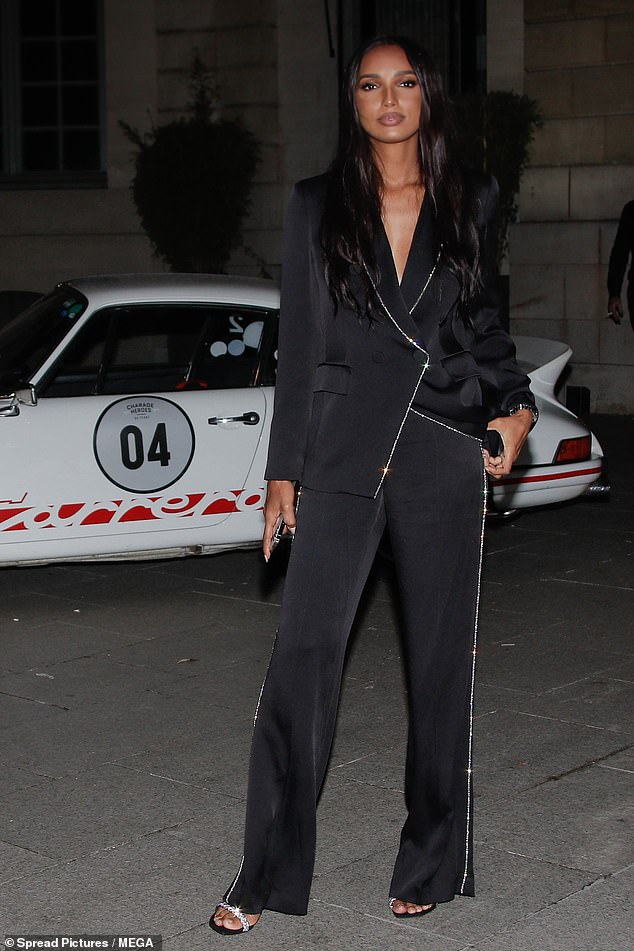 Looking good: Tookes opted for a smart black trouser suit for her appearance at the celebratory event on Wednesday 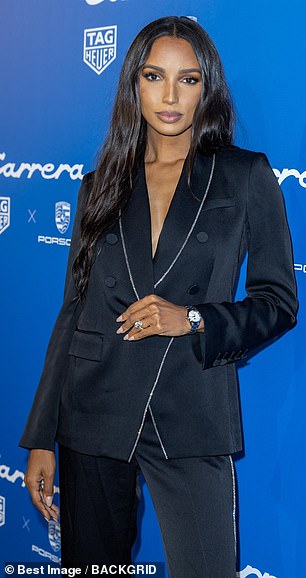 High glamour: Dobrev and Tookes posed for a series of photos as they made their way inside 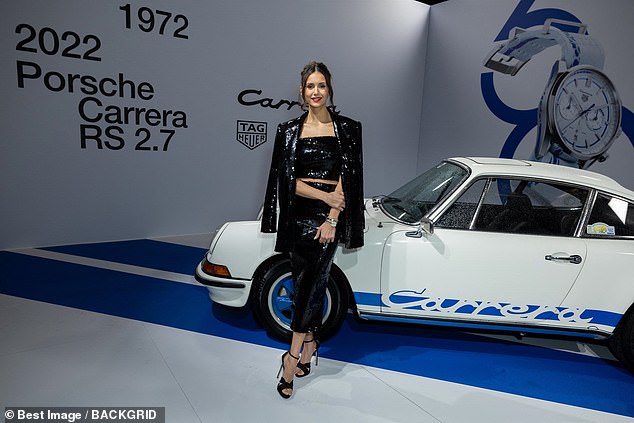 Say cheese: Dobrev posed for a glamorous photo as she helped Tag Heuer celebrate the 50th anniversary of its collaboration with the legendary Carrera RS 2.7 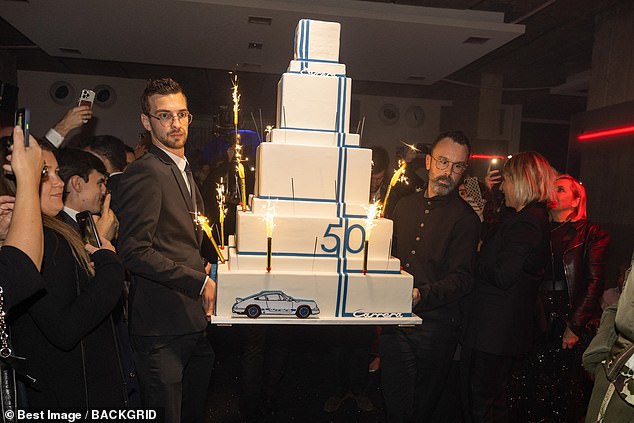 English model Regan claimed her own share of the spotlight in a striking silver mock neck and leggings, teamed with over-the-knee black boots.

Single following her split from Romeo Beckham, the pretty blonde, 19, offered a beaming smile as she made her way inside ahead of the celebratory event.

Other guests on the night included Stella Maxwell, who stood out in an elegant black tuxedo suit and matching boots. 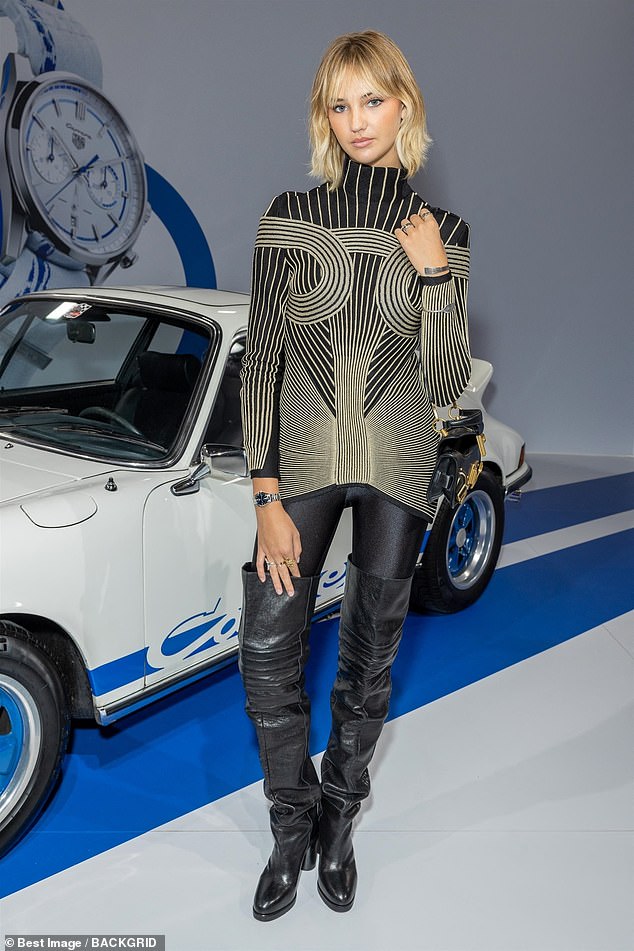 Stylish: Mia Regan claimed her own share of the spotlight in a striking silver mock neck and leggings, teamed with over-the-knee black boots

Stepping out: Single following her split from Romeo Beckham, Mia Regan offered a beaming smile as she made her way inside ahead of the celebratory event 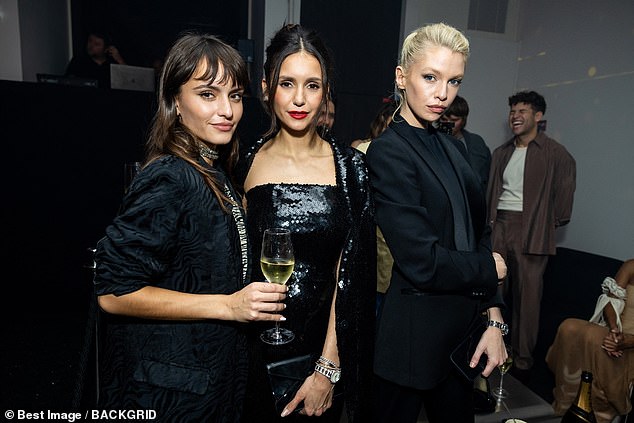 Getting involved: Matthew Williams and Maria Sharapova posed for photos after making their way inside 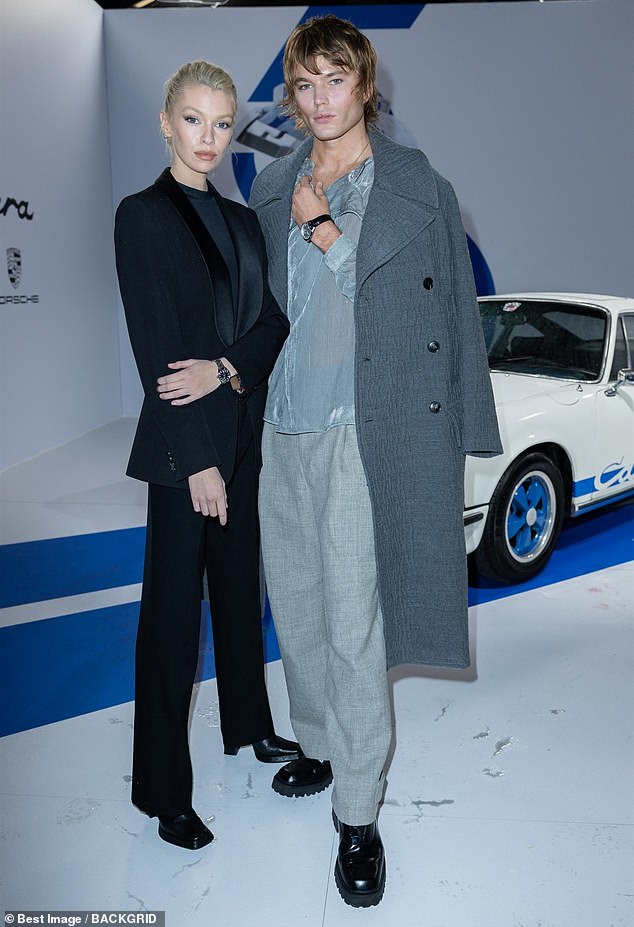 Side by side: Maxwell rubbed shoulders with Australian model Jordan Barrett

The former Victoria’s Secret Angel, 33, rubbed shoulders with Australian model Jordan Barrett and American actress Alexandra Daddario, whose floor length gown proved to be another fashion highlight at the event.

Jaden Smith also made his presence felt at the event, and the 24-year old singer and actor was seen rubbing shoulders with model Younes Bendjima, the ex-boyfriend of TV personality Kourtney Kardashian.

The event was held as Tag Heuer and Porsche celebrated their 50-year collaboration with the legendary Carrera RS 2.7. 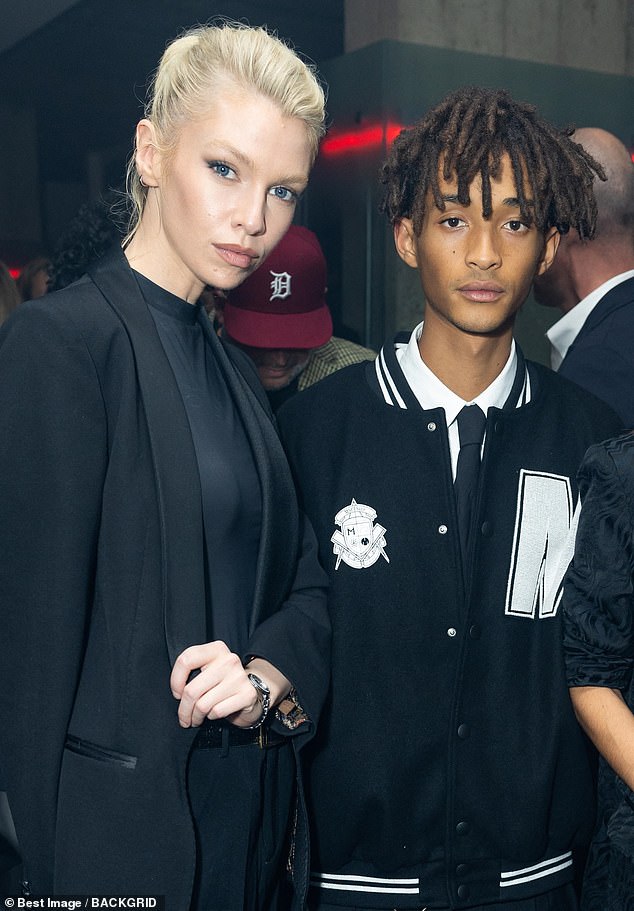 Side by side: Maxwell also crossed paths with Jaden Smith at the celebratory event

Here come the boys: Younes Bendjima (L) and Jordan Barrett (R) posed for cameramen at the Place Vendôme in Paris on Wednesday evening 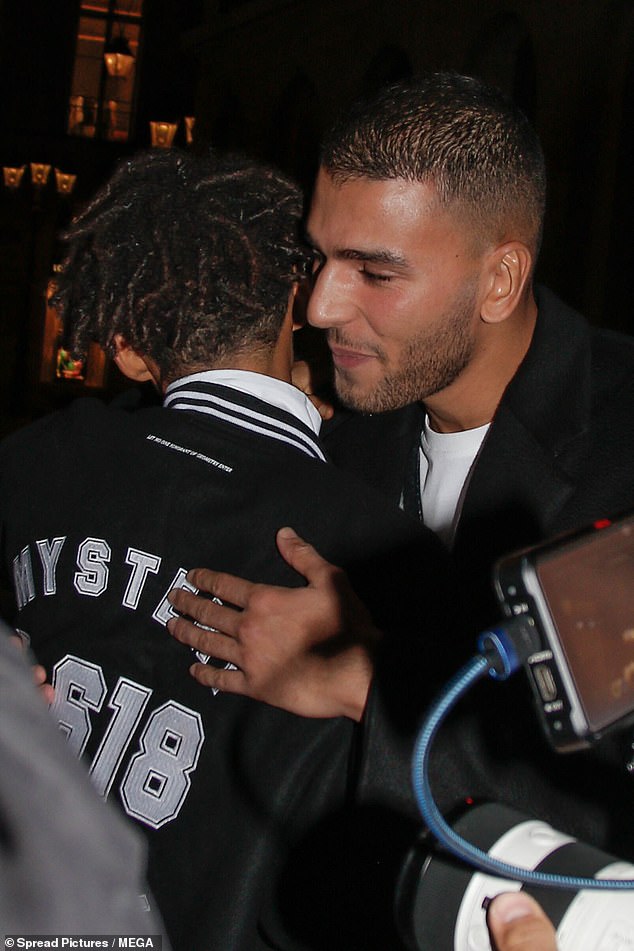 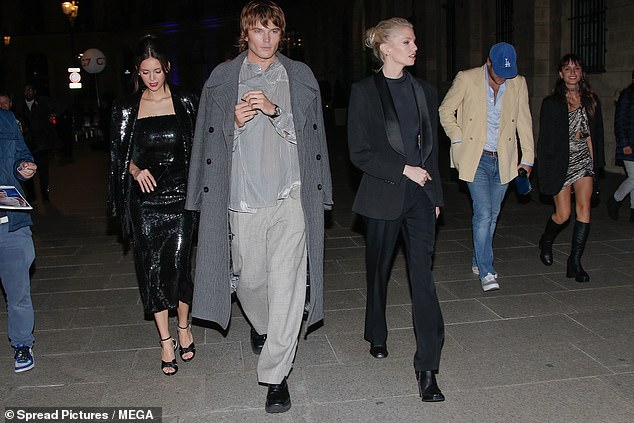