Tiffany Trump and her older sister Ivanka both shared warm messages for their stepmother Melania while paying tribute to the first lady on her 48th birthday.

Tiffany, 24, took to Instagram Stories on Thursday to post a snapshot of herself with Melania and her father, President Donald Trump, at the White House Easter Egg Roll earlier this month.

Paying tribute: Tiffany Trump, 24, shared a photo of herself posed with her stepmother Melania and her father, President Donald Trump, in honor of the first lady’s 48th birthday on Thursday 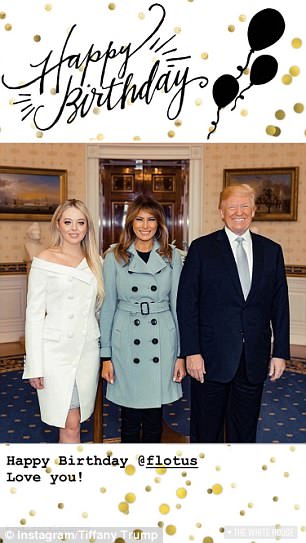 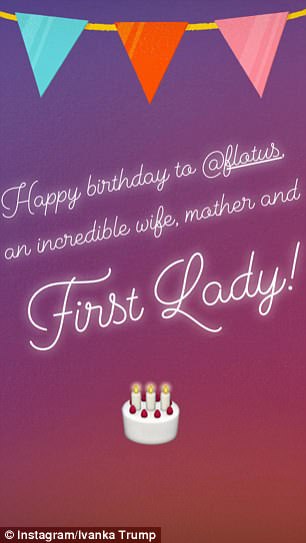 In the photo, Tiffany is wearing a white off-the-shoulder, double-breasted blazer dress, which she later covered with a pastel pink coat.

Melania is pictured wearing a pale blue trench coat while standing between her husband and stepdaughter, while Trump donned a suit and light blue tie.

All three of them have bright smiles on their faces while posing for the family photo.

Ivanka, 36, also had an Instagram Stories message for the first lady, but, unlike her younger half-sister, she opted not to share a photo.

‘Happy birthday to @flotus, an incredible wife, mother and First Lady!’ Ivanka wrote, adding a banner and birthday cake emoji to the post. 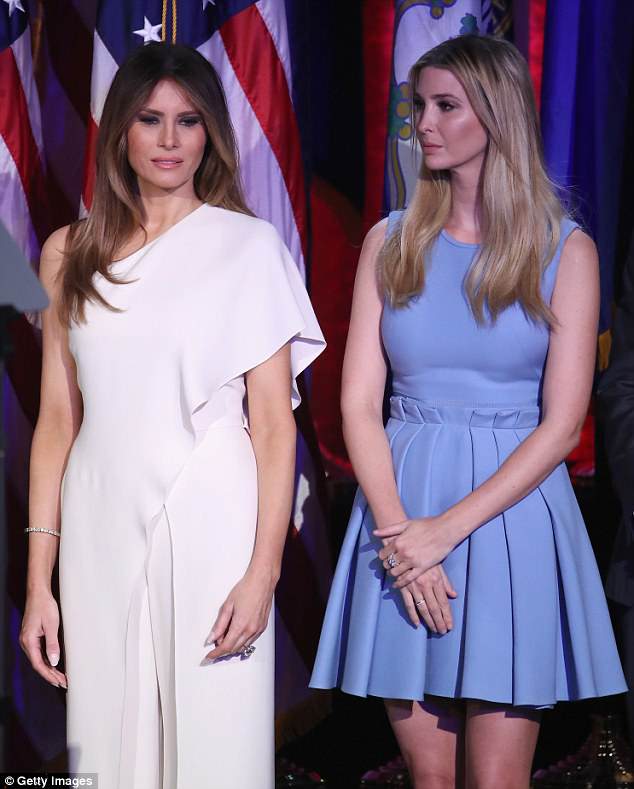 Shout out: Ivanka (pictured with Melania in 2016) also tweeted her birthday message for her stepmother

‘Thank you’: On Friday, the day after her birthday, Melania took to Twitter to show her gratitude for all kind words she had received

The first daughter shared the same brief message on Twitter.

While Melania’s stepdaughters opted for social media tributes, the president called in to Fox & Friends on Thursday morning and gave his wife a shout out.

Trump explained that the date was special because it was Melania’s birthday, but he admitted that he failed to buy her a proper gift because he has been ‘busy.’

‘Well, I better not get into that because I may get in trouble,’ Trump told the show’s hosts. ‘Maybe I didn’t get her so much. 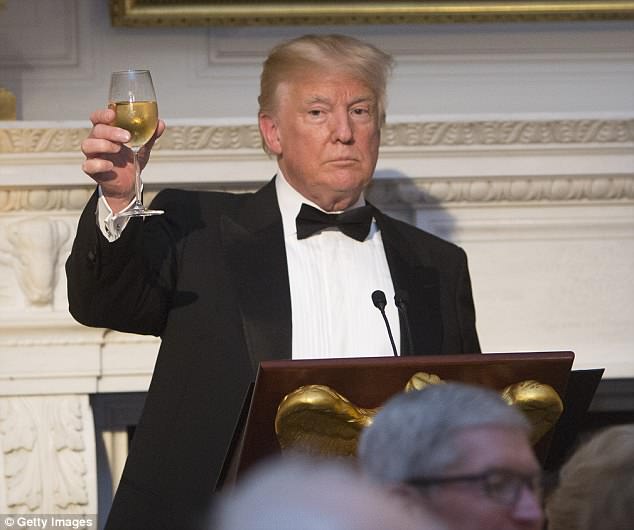 ‘I’m very busy’: Trump (pictured at Tuesday’s state dinner) admitted on Fox & Friends Thursday that he ‘may get in trouble’ for only getting Melania a card and flowers for her birthday 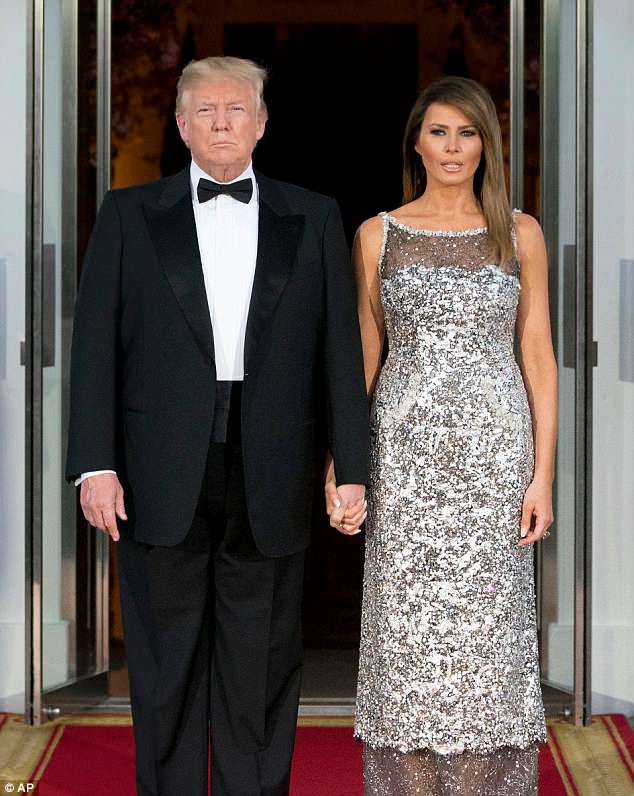 Proud: The president went on to gush about the ‘fantastic job’ Melania did planning the administration’s first state dinner, which took place on Tuesday (pictured)

The president then went on to gush about Melania’s execution of Tuesday night’s state dinner with French President Emmanuel Macron and his wife, Brigitte.

‘She did a fantastic job with France,’ he said. ‘I tell you what, the people of France are just, were spellbound by what happened, with their great president who just left, Emmanuel. And he is a wonderful guy.’

Melania took a hands-on approach to the planning of the administration’s first state dinner, choosing to have her small team handle the event instead of hiring outside party planning help, which past first ladies have utilized.

The dinner was small, intimate, with guests sitting in the state dining room under candlelight.

On Friday, the day after her birthday, Melania took to Twitter to show her gratitude for all kind words she had received. 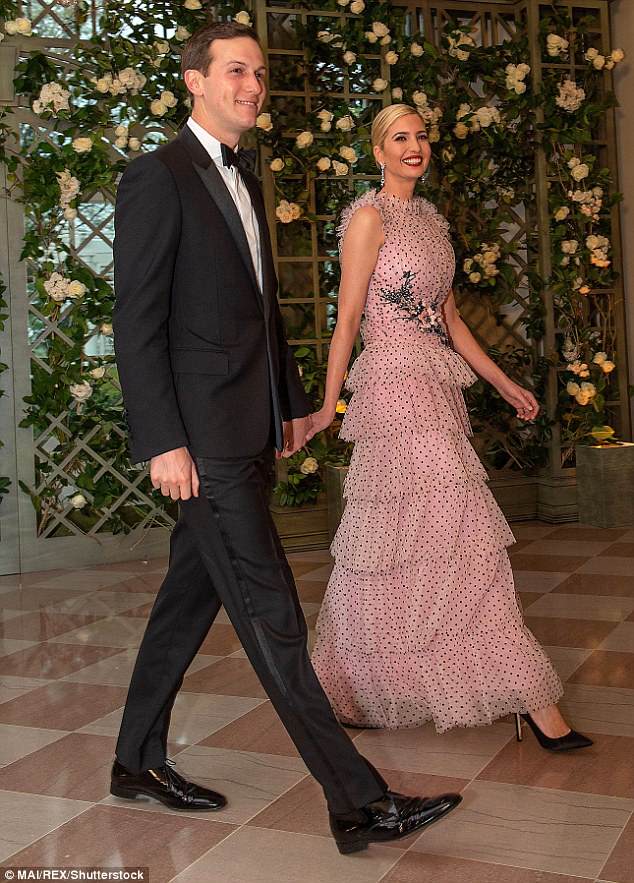 Happy as can be: Ivanka and her husband, White House senior adviser Jared Kushner, were all smiles at the state dinner 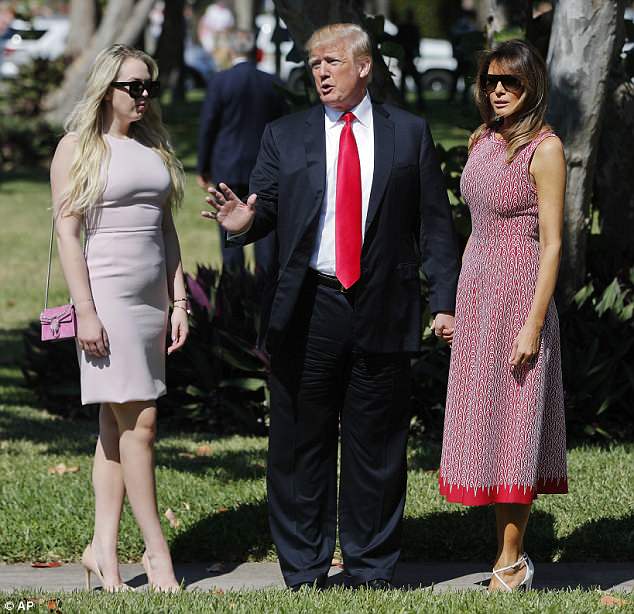 Family gathering: Tiffany joined her father and his wife at Easter services at Episcopal Church of Bethesda-by-the-Sea earlier this month

‘Thank you to everyone for all the wonderful birthday wishes!’ she wrote.

Tiffany, who is finishing up her first year of law school at Georgetown University, celebrated Easter with her father and stepmother at the family’s Mar-a-Lago estate in Palm Beach, Florida, earlier this month.

Trump’s only child with his second ex-wife, Marla Maples, wore a pale pink dress to attend Easter services at Episcopal Church of Bethesda-by-the-Sea.

Ivanka did not travel to Mar-a-Lago with her family, nor did she attend the White House Easter Egg Roll.

Instead, she and her husband, Jared Kushner, took their three children to Wyoming to celebrate Passover with the Kushners.

Jared, 37, was raised in an Orthodox Jewish family, and Ivanka converted to Judaism before marring her husband in 2009.