‘I thought it was going to be our last cuddle’: Mother’s heartbreak after her baby was struck down with meningococcal – just weeks before she was due to get her vaccination

A terrified mother has opened up about her baby daughter’s near-death ordeal after she was struck down with meningococcal.

Tiffany Henderson, from South Australia, was told to prepare for the worse after her then-seven-month-old girl Violet contracted the B strain of the potentially deadly disease.

Little Violet was just two weeks away from getting her vaccination when purple blotches of rash started to appear all over her body.

Meningococcal disease is an acute bacterial infection that can cause death within hours if not recognised and treated in time.

The infection is a medical emergency. It can kill within hours, so early diagnosis and treatment is vital. Do not wait for the purple rash to appear as that is a critical stage of the disease.

‘I thought they were giving me my last cuddle which was the scariest moment of my life and I wouldn’t want any parent to ever feel it.’

But against all odds, the baby miraculously survived after spending 12 days in hospital fighting for her life.

‘I’m one of the luckiest mums out there to be able to go home with my baby after fighting meningococcal,’ Ms Henderson said.

Earlier this year, the mother revealed how she first noticed something unusual about her normally bubbly baby.

Violet’s father Peter Duffield added: ‘Within a couple hours it was from one dot to all over her legs, very traumatic.’ 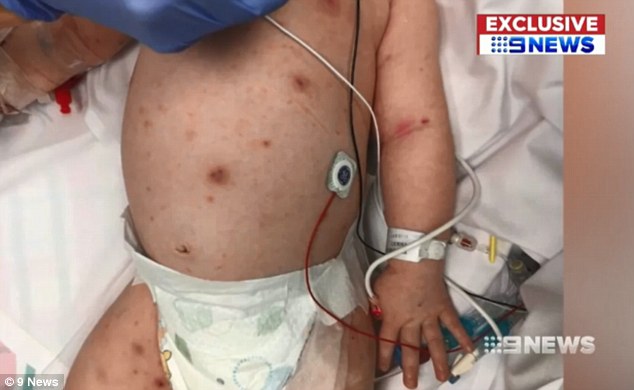 Tiffany Henderson, from South Australia, was told to prepare for the worse after her then-seven-month-old girl Violet contracted the B strain of the potentially deadly disease

The family was airlifted to Adelaide’s Women’s and Children’s Hospital where she underwent a life-saving treatment after being diagnosed with the B strain of meningococcal.

The story comes as more than a million teenagers across Australia are expected to receive free meningococcal vaccinations.

The combined vaccine for meningococcal strains A, C, W and Y will be available at no cost to Australians aged 14 to 19 from April next year.