A popular Melbourne baker has tricked millions of her followers after sharing a cartoon cake that looks so real her fans refuse to believe it’s cake.

Tigga MacCormack, co-owner of Cake for Days, joined the recent TikTok trend of making ‘cartoon cake’, or a dessert that looks like something straight from a comic book.

Tigga uploaded a video of her baking process, however many of her followers still demanded proof of her cutting the cake to prove it’s real: ‘You can’t fool us’.

Melbourne baker Tigga McCormack has deceived her followers once again with a cartoon cake that looks like it came straight from a comic book. The chef is known for making cakes that look just like real life items 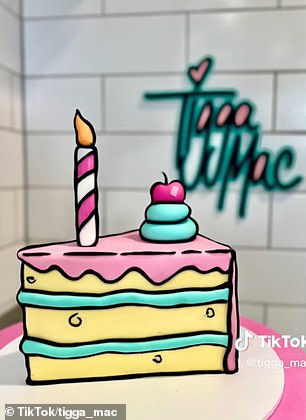 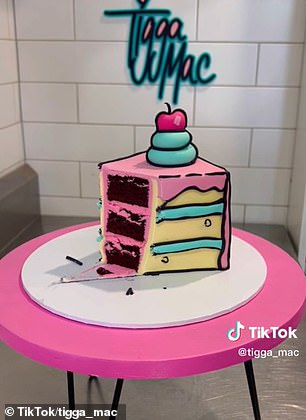 She uploaded a TikTok tutorial making the cake however her followers didn’t believe it wasn’t a cartoon. She had to post another video cutting the cake open to prove it was actually cake

‘The type of cake that I’m making is a trend that’s been around for a few months, but I haven’t made one yet, and I thought “I wanna get in on the action”, the baker said when she uploaded her tutorial to TikTok.

‘I wish I’d come up with this concept. Every time I see one I’m like “It looks so cool”.

‘If you have no idea what I’m talking about, it’s creating a cartoon piece of cake. Comic book style cake is all the rage at the moment.’

She added: ‘It’s a super simple concept you literally just line everything in black so that when the cake is sitting at a certain angle it looks like a drawing.’

She first cut her cake into triangles and then stacked them on top of each other using pink ganache so they resemble one triple-decker slice of cake.

She also used the ganache to covered the piece of cake and smoothed it out.

She then covered the cake in yellow and pink fondant and cut the fondant in a way so that it looks like icing is melting down the cake.

She made thin strips of black fondant and outlined all of the cakes features in black to give it a cartoon appearance.

How to make your own cartoon cake

* Make a cake or use leftover cake and cut it into three triangles of the same size.

* Stack them on top of each other using pink ganache so that they resemble one triple-decker slice of cake.

* Cover the cake in ganache and smooth it out.

* Cut off the excess fondant and shape it in a way so that it looks like icing is melting down the cake.

* Make a fondant candle, put it on a toothpick and stick it into the top of the cake.

* Make thin strips of black fondant and outline all of the cakes features in black, then add small black circles to the side of the cake.

Many who saw the cake simply didn’t believe it was a dessert.

‘Nah you have to cut it for me to believe it’s real,’ one woman said.

‘You cant fool us. You just put a cartoon cake there,’ another wrote.

‘My brain hurts, did you switch it to a cartoon cake or is it real, I can’t tell,’ another commented.

The chef said she took the accusations as a ‘huge compliment’, but uploaded a video of her cutting the cake to prove it was really cake.

In a viral clip she pans the supermarket aisle and challenges viewers to guess which item on the shelves is actually made of cake.

The clever baker later revealed that one of the Milo tins, which is indistinguishable from the tins next to it, is actually made of cake by taking a huge bite out of it. 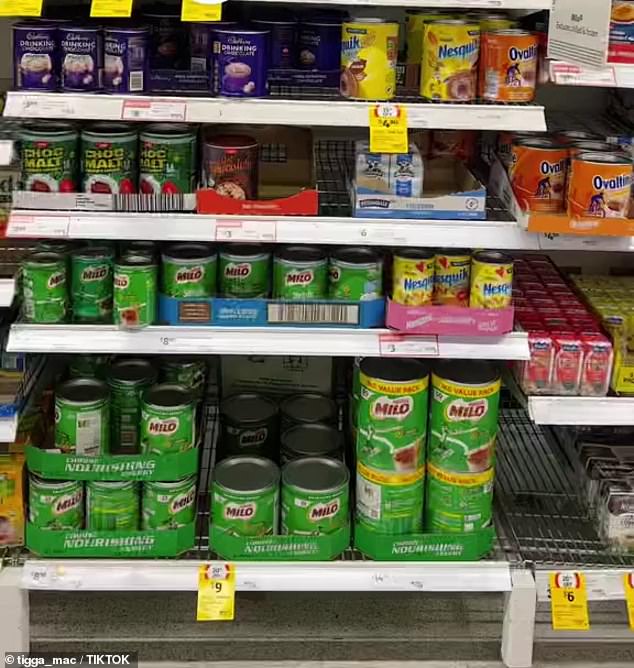 Can you spot the cake? Talented Baker Tigga Maccormack has gone viral for her TikTok videos where she hides her ultra realistic looking cakes at the supermarket 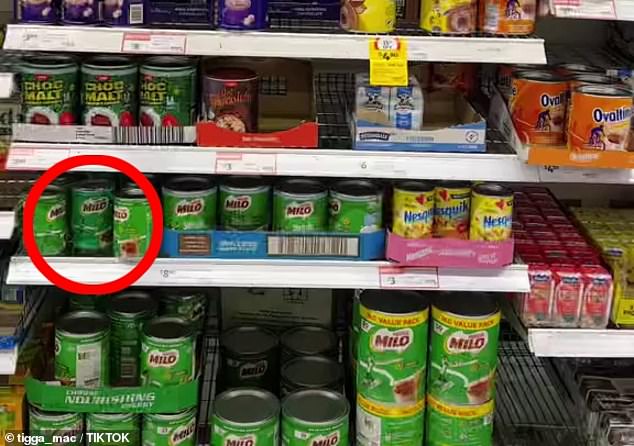 Before the reveal, some eagle-eyed viewers in the comments clocked the ‘tin’ as a cake whereas other were left baffled.

‘I was convinced it was the T2 box omg,’ one fan said after Tigga revealed the real cake.

‘I was right! Only way I knew is because it was slightly darker green,’ another said.

Tigga even scans the cake at the checkout which rings up as a regular Milo tin confusing the cashier who said it was ‘very convincing’. 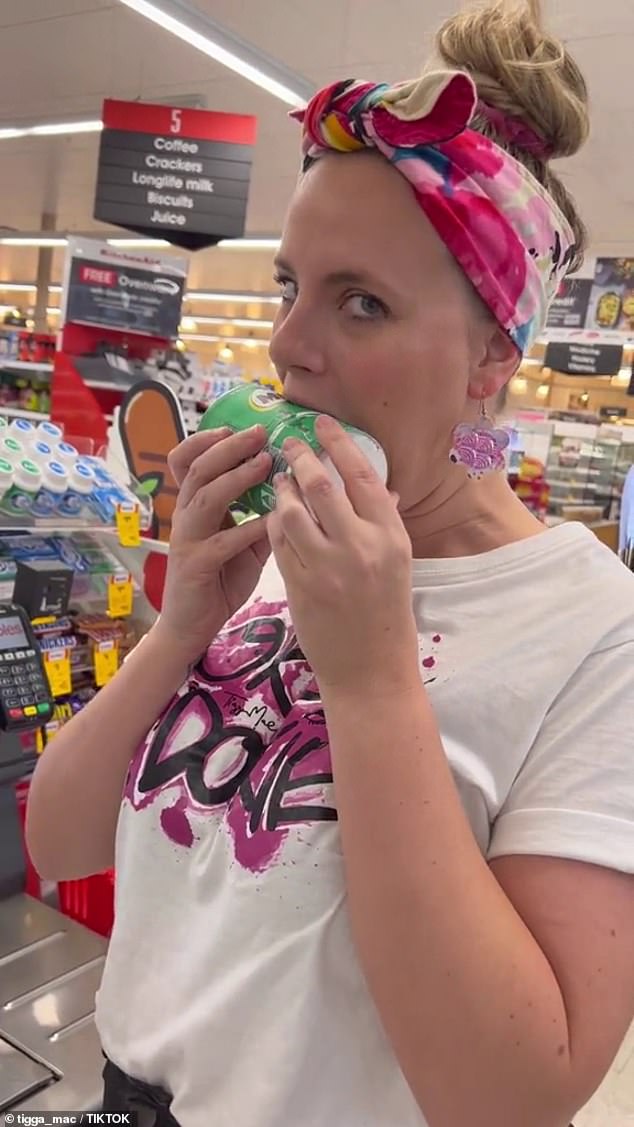 The Melbourne pastry chef explained how she creates her incredibly convincing cakes by using a special edible image printer.

‘I take the label off the real product, scan it into my computer and then on my computer I make sure all the measurements are correct,’ she said.

Tigga then prints the label onto edible paper with edible ink and said, while it comes close, the ink won’t always give her an exact colour match.

Her Milo tin cake clip was part of a viral series called Shopping with Tigga where she hides her realistic cakes on the shelves at her local Coles or Woolworths. 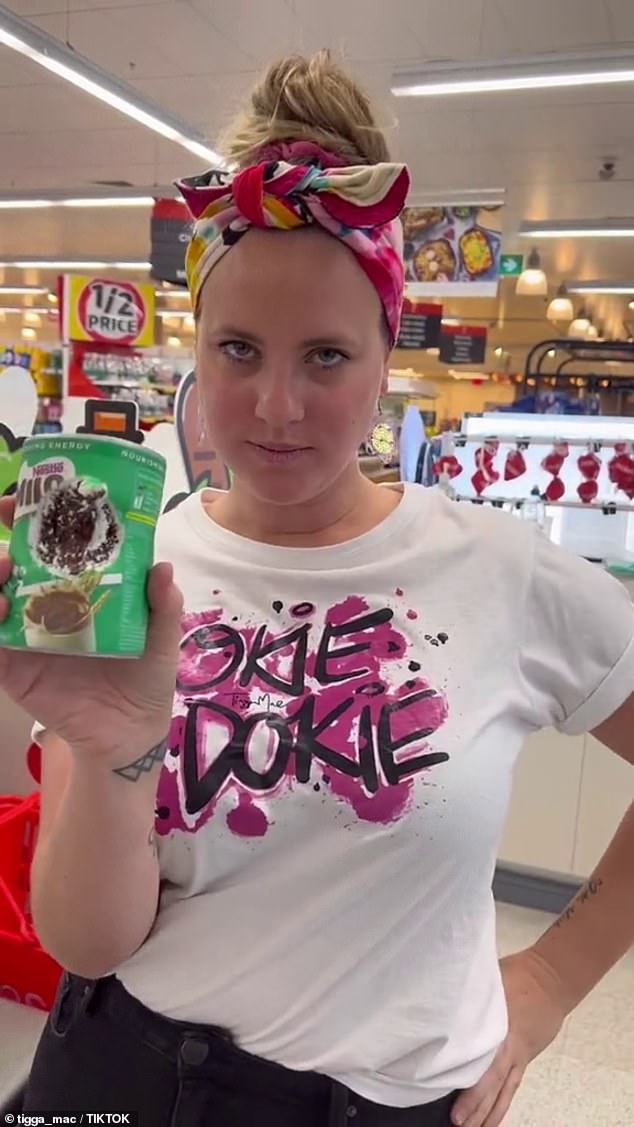 In another clip, Tigga explained how she creates her incredibly convincing cakes by using a special edible image printer

She has also created a tomato sauce bottle cake identical to those on the shelf next to it.

In the first of two videos, which has been viewed 3.4million times, Tigga showed a supermarket aisle in which her cake blended indistinguishably into other sauce bottles.

In the second video, the baker browses the shelves before picking up one of the ‘bottles’ and biting into it, revealing it to be cake.

‘I fooled so many of you,’ the baker captioned the second clip.

Hundreds of viewers in the comments said they guessed it right but others admitted they were stumped.

‘What – no way, you absolutely fooled me, you are amazing,’ said one woman.

‘I guessed it – but girl I was scannnnning thru the video trying to find it! This is the best,’ a second wrote.

In a video to Instagram, Tigga demonstrated how she created the sauce bottle cake by stacking layers of cake and then carving it into the right shape. 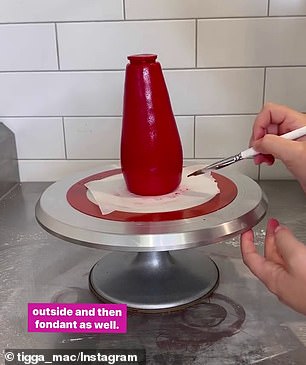 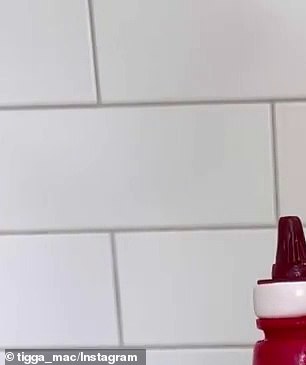 In a video to Instagram, the clever baker detailed how she created the sauce bottle cake saying she stacked a few layers of cake and carved it into the right shape

‘One of the hardest things about making a cake like this is trying to get it the perfect size. Once you’ve cut the cake and you’ve got to allow for ganache on the outside and then fondant as well,’ she said.

Tigga said she ‘eyeballed’ the bottle shape and lid and used a printer with edible link to reproduce the MasterFoods label.

‘Using edible ink, it’s really tough to get an exact match and a lot of people said that was the main reason they could tell the difference,’ she explained.