An Australian comedian has confronted Indian and Bangladeshi fans at the World Cup wearing Brazilian jerseys and accused them of being ‘fake’ as videos of identikit fans wearing shirts from different countries emerge.

Jon-Bernard Kairouz took to the streets of Qatar to confront the supporters in a video titled ‘World Cup Fake Fans,’ following Brazil’s opening match with Serbia.

It comes after videos shared online show large groups of men, mostly of Indian and Bangladeshi origin, wearing the colours of national teams including England, Brazil, Germany and Argentina, lead to speculation they had been ‘hired’ by Qatar to build atmosphere for the competition.

Kairouz asks whether the ‘fans’ are from Brazil, with all explaining they’re from Bangladesh or India, in a video shared on TikTok on Saturday.

Kairouz, asks the fans: ‘Did FIFA pay you to be here?’

Without hesitation, the fans replied ‘yes’, with one explaining he is ‘actually a fan of Argentina’ but was paid to support Brazil. 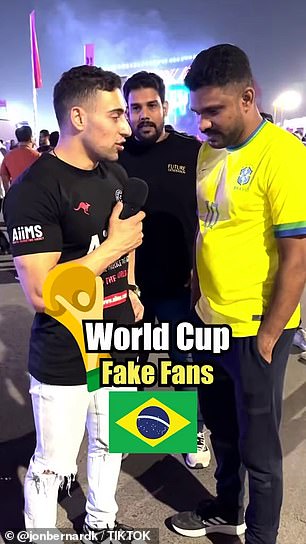 Australian comedian Jon-Bernard Kairouz (pictured, left in left and right) interviewed fans donning Brazilian jerseys outside of a football stadium in Qatar. The men, who were from Bangladesh and India, admitted to being paid by FIFA to attend the match

When asked to choose their favourite player from the Brazilian line-up the men named one player, 30-year-old forward Neymar.

The men were left completely stumped when Kairouz asked them to name another player from the countries squad.

‘To be honest, about this I don’t know,’ another said.

A third added: ‘actually no, I’m not a fan of football, I’m a cricket fan.’

The video was shared with his 13.3 million followers, which started a huge debate after Kairouz suggested they were fake.

Some claimed that the men were not explicitly paid to attend the matches but were given free tickets after working to build the stadiums.

‘What they meant by saying FIFA paid them to be there is actually most of them are construction workers and they came to Qatar to work,’ one user wrote.

‘These guys worked on the construction of the stadiums and were given tickets,’ a second user commented.

A third added: ‘A lot of these guys worked there in construction and probably get free pass.’ 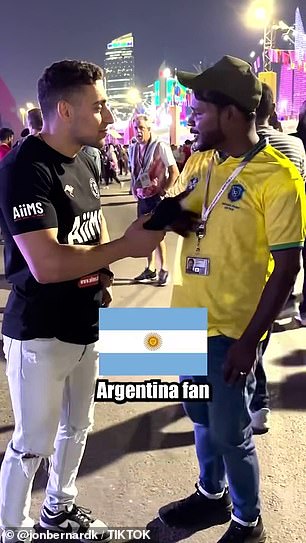 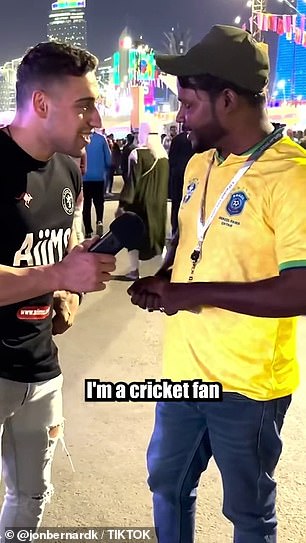 One man said he was ‘actually a fan of Argentina’ but was paid to support Brazil, before telling Kairouz he was not a fan of football but rather a cricket fan 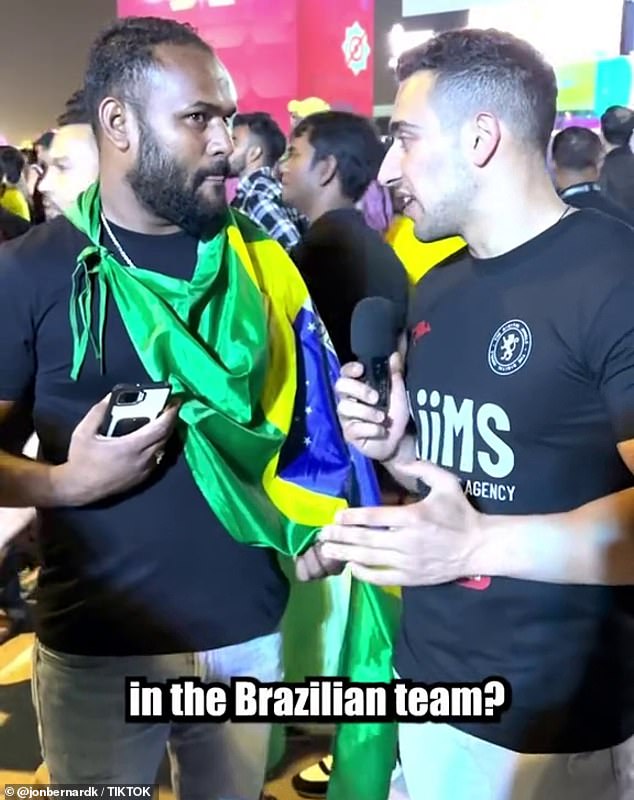 Others questioned whether the edited video was true and argued that fans are allowed to support a team regardless of the country they’re from.

‘The video is trimmed and edited between interviews. I am not sure if this is true,’ one user commented.

‘I’m from Afghanistan and I’m a Brazil football team fan,’ another added.

One TikTok user, who is from Bangladesh, explained the Brazil and Argentina are the two favoured football teams in the country, hence why there are a lot of Bangladeshi Brazil supporters in Qatar.

It comes after footage emerged of various ‘fan parades’ in Doha, including celebrations featuring supporters supposedly from England, Brazil, Argentina and several other nations.

But fans reacted with skepticism and some accused the Qatari authorities of paying migrant workers to dress up in support of different nations, something Qatar strongly denies. 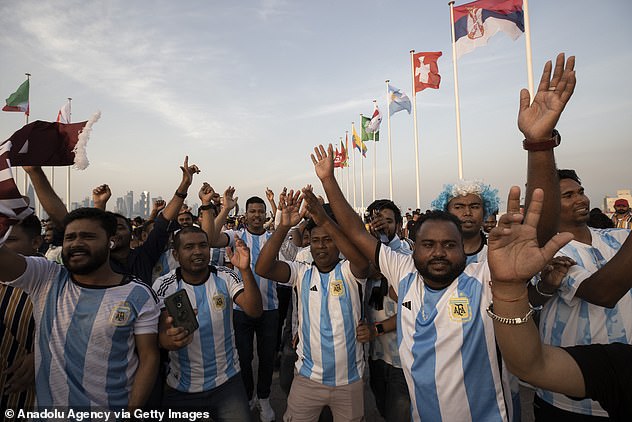 Qatar has denied claims it has paid for fake fans, arguing that football was hugely popular with its Indian community

The Qatari government claims the large Indian population in the country are real football fans who back various national teams from around the world.

Gianni Infantino dismissed suggestions that the fans were fake as racist in a press earlier this month where he defended the Qatari regime and accused Europeans of double standards.

In an extraordinary hour-long speech, the FIFA president said: ‘I am reading that these people don’t look English so they can’t cheer for England, they look like Indians. What is that? Can someone who looks Indian not cheer for England, Spain or Germany?

‘You know what it is? It is racist, pure racist.’

He also said: ‘I think for what we Europeans have been doing the last 3,000 years we should be apologising for next 3,000 years before starting to give moral lessons to people. 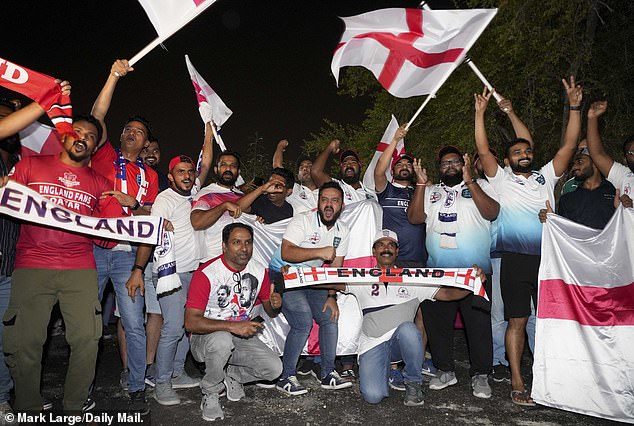 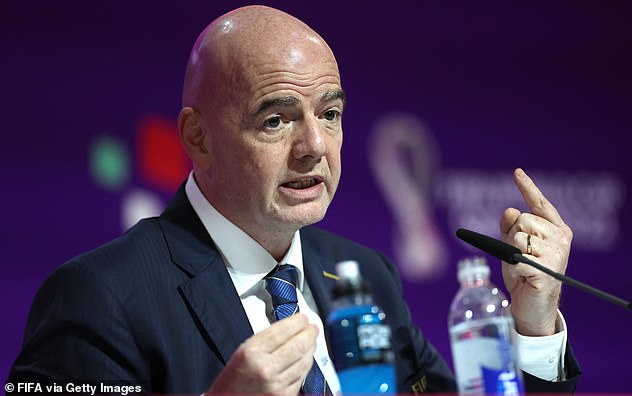 ‘Of course I am not Qatari, I am not an Arab, I am not African, I am not gay, I am not disabled. But I feel like it, because I know what it means to be discriminated, to be bullied, as a foreigner in a foreign country. As a child I was bullied – because I had red hair and freckles, plus I was Italian so imagine.

‘What do you do then? You try to engage, make friends. Don’t start accusing, fighting, insulting, you start engaging. And this is what we should be doing.’

World Cup CEO Nasser Al Khater claimed football was hugely popular with Indians in Qatar and rejected the idea any fans were fake.

He said: ‘We have a lot of genuine supporters in Qatar that are from the south of India that love football and they are genuine fans.

‘They are true fans of football.’