The ‘dead celebrity’ TikTok trend that is leaving parents in tears and children in fits of giggles: Viral prank that pretends stars such as Cher, Robbie Williams and Jon Bon Jovi have died divides opinion, so do YOU think it’s morbid or a cheap laugh?

A TikTok trend where people pretend celebrities such as Cher, Robbie Williams and Jon Bon Jovi have died has divided opinion over whether it’s hilarious or morbid.

People are filmed, often by their children, to catch their reaction as they ‘find out’ their favourite star has died.

At hearing the news, some dramatically burst into tears, while others start screaming and shouting in disbelief, before being informed it was just a prank.

Many people find the trend hysterical but others are not so convinced, calling the hoax ‘sick’ and ‘downright disgusting’.

Mostly young TikTok users are pranking their parents and families as they gather together over the festive period in the hope they fall for the prank, as the latter tend to be more oblivious to Internet antics.

All celebrities mentioned in the videos are still alive.

In one hilarious video, a woman breaks the news to her mum that Idris Elba has passed away.

The mother throws herself backwards in shock, appearing to hit her head off the wall before jumping up from her seat.

Her daughter then bursts out laughing as she reveals it was a hoax.

<any have found the death pranks hilarious, with one social media user calling it the best thing to happen this year

One woman is wrongly told that ‘David Beckham has died aged 47’ to which she stops what she’s doing and says: ‘No he hasn’t, no way. Not our David Beckham.’

People on TikTok thought ‘our David Beckham’ was hilarious, with one saying: ‘Like you know him personally [crying faces].’

In a video where Jamie Oliver is said to have died, the woman is instantly annoyed, saying ‘Don’t say anything like that’ angrily and calling the woman taking the video a ‘stupid cow’.

In another video, a woman is woken up to the news Adele has died and is jolted awake by her horror, shouting ‘What, no!’

In another, a prankster tells her mother than Jon Bon Jovi has died. Her mother screams ‘SHUT UP SHUT UP’ as she runs at the camera and bursts into tears.

It then pans to her crouched to the floor, distraught, before finding out it was a prank.

Tom Cruise is the ‘victim’ of another death hoax, causing a whole family to scream as the camera pans round showing their shock and horror.

A man in the family has his hands on his head in disbelief.

In another video, a woman gathers her family to break the news that ‘Barack Obama is dead at 51.’

Everyone in the room bursts into cries of ‘NOOO OH MY GOD’, screaming ‘in pure terror’ as one person commented. 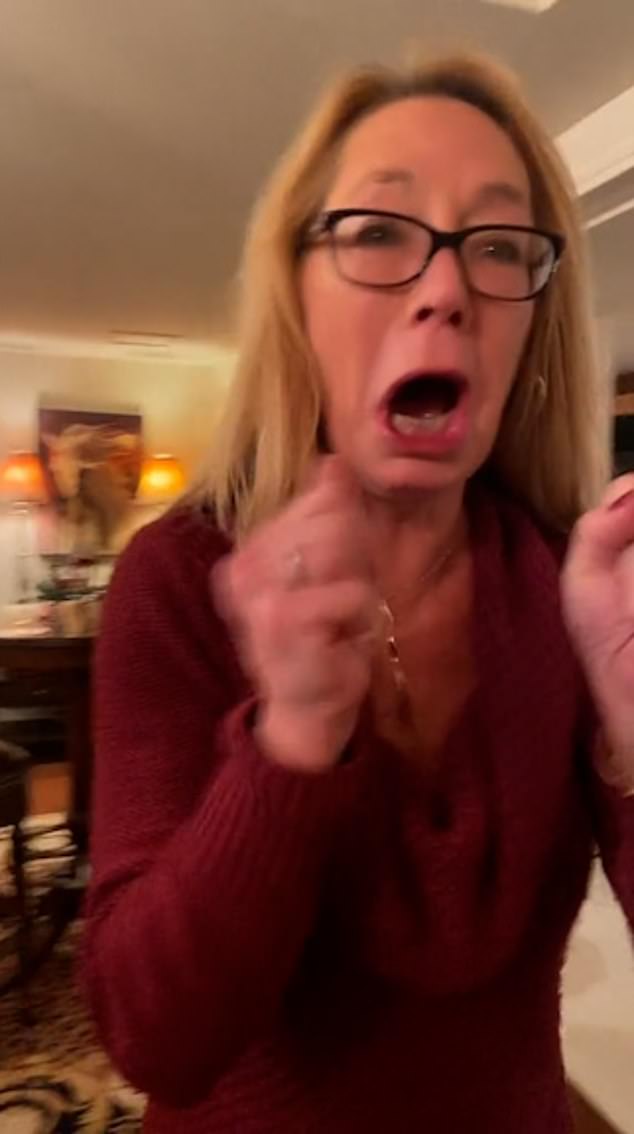 In another, a prankster tells her mother than Jon Bon Jovi has died. Her mother screams ‘SHUT UP SHUT UP’ as she runs at the camera and bursts into tears

Many people find the trend hysterical but others are not so convinced, calling the pranks ‘sick’ and ‘downright disgusting’

However not everyone finds the trend amusing, with one person saying it ‘doesn’t sit right with me’ and another calling it ‘distasteful’.

Another person voiced their outrage, saying: ‘The celebrity death prank trend on TikTok is downright disgusting. People will do anything to try and go viral.’

Someone else called it ‘extremely weird and childish’ while another was concerned it was ‘manifesting stuff I want no part in.’

Not everyone finds the trend amusing, with one person saying it ‘doesn’t sit right with me’ and another calling it ‘distasteful’