The meaning of the little symbols and stamps on the backs of cosmetics bottles have been revealed in a TikTok video.

An American woman called Tracy posted the clip, which begins with a voiceover explaining that tiny jars marked with a number and the letter ‘M’ indicate the product’s shelf-life after opening.

Cosmetics labelled ‘6M’ are safe to use for just six months, while those marked ’12M’ can be used for up to a year.

‘Did y’all know this? I’ll still use expired stuff but now I know when it’s TOO expired,’ the caption reads, followed by the popular hashtag ‘TikTok taught me’.

The hashtag is linked to tens of millions of instructional videos on everything from tying shoelaces to renovating a bathroom without professional help.

A hand with a book

A hand pointing to an open book indicates that there is more information about the product and how to use it included in the packaging.

These instructions are usually listed on a pamphlet insert or the opposite side of a peel-over sticker.

Manufacturers use the ‘hand book’ symbol when there isn’t enough space to include the relevant information on the bottle.

The back of a OPI nail polish shows four symbols, meaning (left to right) the manufacturer supports recycling initiatives; the product is flammable; more information is written on a separate leaflet; the nail polish can be used for two years or 24 months after opening

Most cosmetics have a tiny jar marked with a number followed by the letter ‘M’ on the back.

This indicates how long the product will last once opened, known in the manufacturing industry as a Period After Opening (PAO) symbol.

Products labelled ‘6M’ should be used for six months, while bottles labelled ’12M’ can be used safely for up to one year. 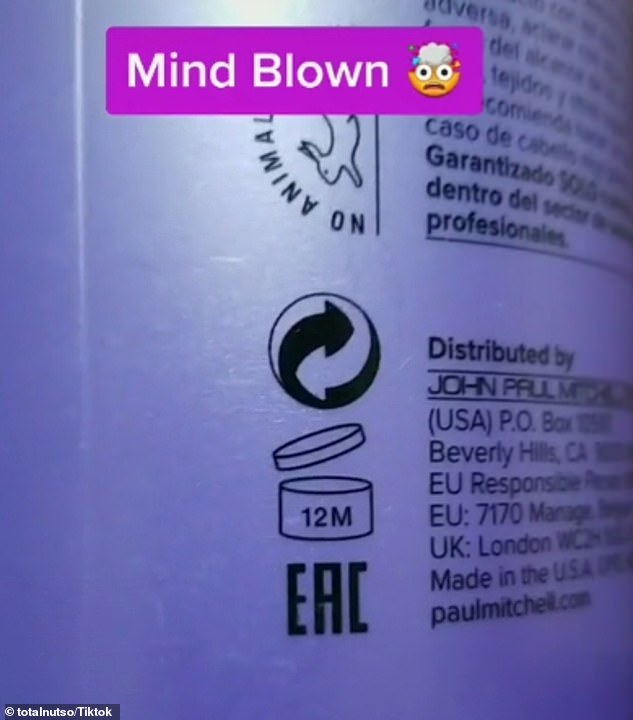 A jar marked with a figure and the letter ‘M’ on the back of a cosmetics bottle, which indicates how long the product can safely be used for opening

A half-filled hourglass on the base of cosmetics packaging means the product has a shelf-life of less than 30 months – two and a half years.

The symbol can be used in place of the figured and lettered jar, but is less specific regarding the exact expiry date.

In Europe, manufacturers are legally required to stamp the expiration date or the words ‘best before end of’ beside the hourglass. 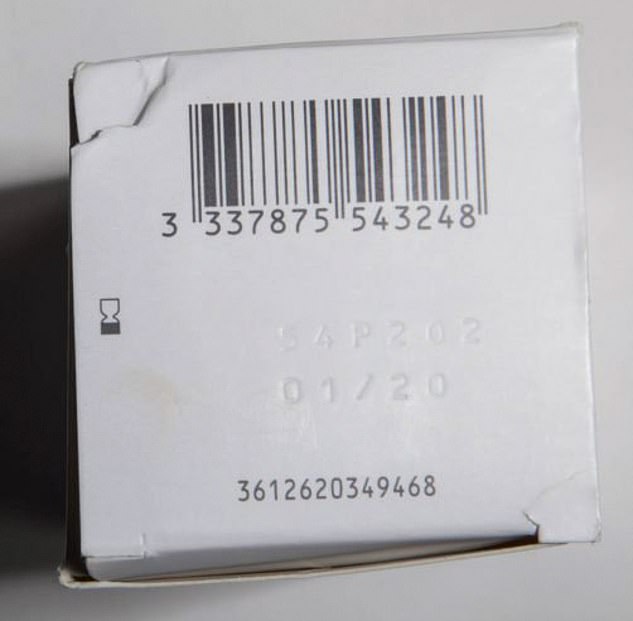 A tiny hourglass on the base of cosmetics packaging, which indicates that the product has a shelf-life of less than two and a half years

A lowercase ‘e’ symbol on the back of a bottle indicates the product meets the European standard for ‘estimated volume’.

This guarantees the volume or amount listed on the label – 100ml, for example – is as accurate as possible.

The ‘e’ mark is also used on the outside of pre-packaging in Australia and South Africa. 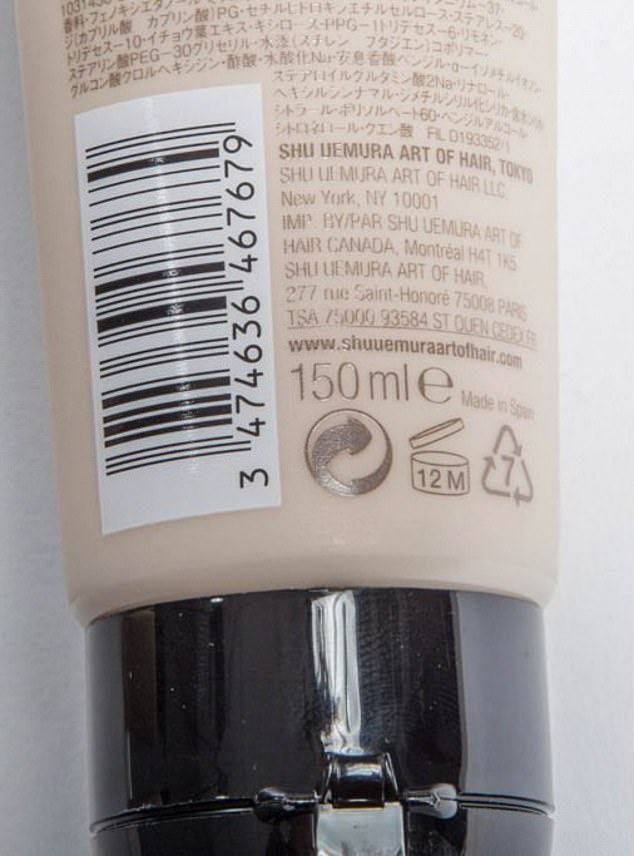 A lowercase ‘e’ symbol (seen here beside a ‘150ml’ label) indicates the product meets the European standard for ‘estimated volume’, guaranteeing the measurement of the bottle is as accurate as possible

A triangle of three arrows

Three arrows that form a triangle is the internationally accepted logo for recycling, which shows that the container is recyclable.

A percentage stamped in the middle of the triangle indicates how much of the packaging was made with recycled materials.

The symbol is often accompanied by letters underneath, intended to help the consumer determine if the container can be recycled.

These are called ‘resin identification symbols’ and indicate the type of plastic used in manufacturing. 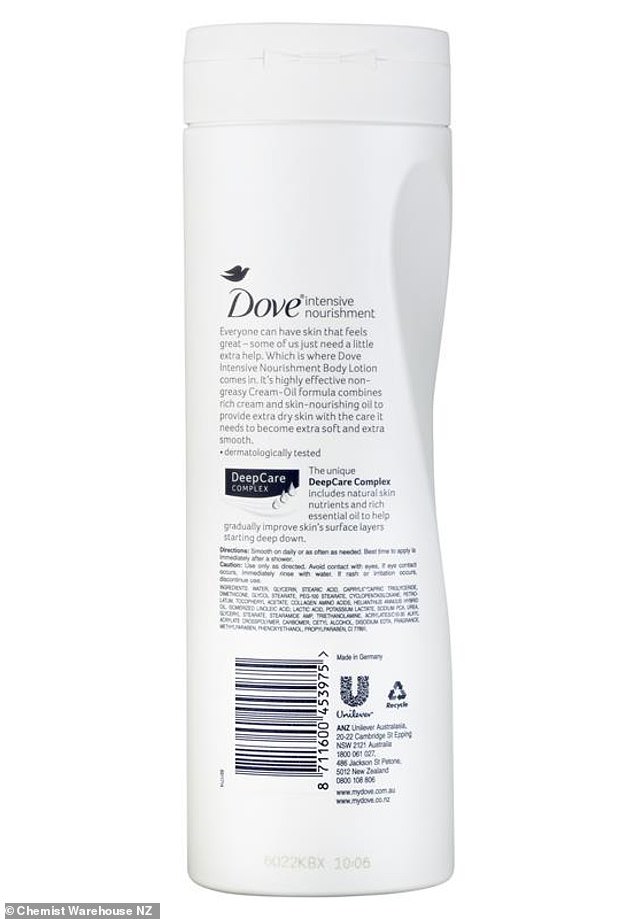 Three arrows that form a triangle (pictured on the lower right of the bottle) is the internationally accepted logo for recycling, which shows that the container is recyclable

Flame over a horizontal line

A flame burning over a thick horizontal line indicates that the liquid inside the container is flammable.

It is most often seen on hairsprays and nail polish which contain flammable ingredients like ethanol.

Products with this symbol should be stored in a cool, dry place away from direct sunlight. 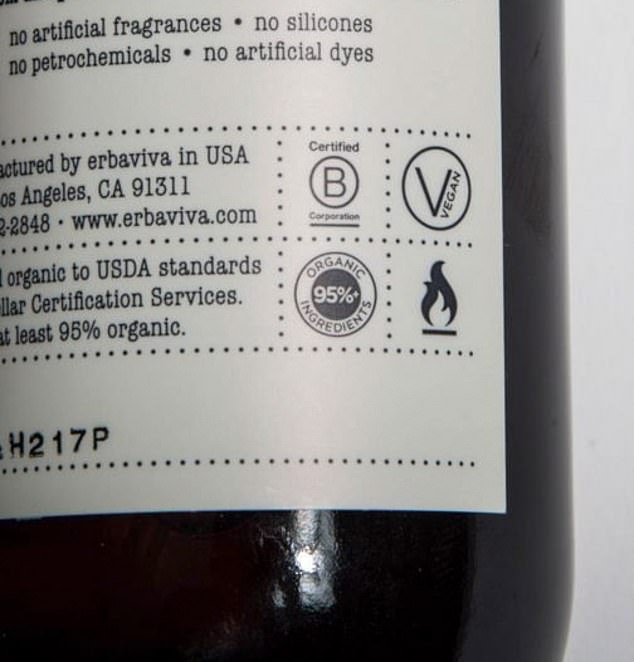 Mascara has a short shelf life because the product is applied close to your eyes – and can be jam-packed with bacteria if you don’t look after them well.

Avoid pumping your mascara wand in and out, as this pushes air into the tube, which can dry out the mascara and cause bacterial contamination.

Bin the product once it dries out, has a different texture, colour or smell – and if you get an eye infection, throw it away immediately and buy a new one.

Liquid eyeliner has a short shelf-life of around four to six months because it is likely to harbour large volumes of bacteria.

Pencil eyeliners (and lip liners) can last up to two years if the cap is kept tightly closed.

Lipsticks can last anywhere from 18 months to two years after opening, provided you look after them well.

Never leave them without a lid on and occasionally clean them with makeup wipes to remove any top layer of bacteria growth.

Most blusher, bronzer and eyeshadow have a shelf-life of 18 months to two years.

Powder lasts longer than wet-based products – as it’s harder for bacteria to grow in cosmetic items that are solid, dry texture.

Once the powder starts to change in colour, texture or smell – it’s time to throw them away.

Concealer and foundation: 12 to 18 months

Most makeup bases last between 12 and 18 months.

Changes in colour, texture or smell are warning signs that it’s time to ditch – or risk getting bad breakouts on your face.

Nail polish can last up to one year from opening, as ingredients gradually evaporate, causing the gel to thicken and separate.