Tillerson: US has direct communications channel with North Korea

US secretary of state Rex Tillerson has acknowledged that America is maintaining direct channels of communications with North Korea even as tensions rise over Pyongyang’s nuclear and missile programmes and the countries’ leaders continue to trade insults.

Mr Tillerson said the US is probing North Korea’s willingness to talk, and called for a calming of the situation on the Korean Peninsula, adding it was incumbent on the North to halt the missile launches.

On a visit to China, he said: “We have lines of communication to Pyongyang. We’re not in a dark situation, a blackout.

“We have a couple … three channels open to Pyongyang. We can talk to them, we do talk to them.”

Mr Tillerson spoke in Beijing, where he met Chinese president Xi Jinping and other top officials.

While Mr Tillerson affirmed that the US would not recognise North Korea as a nuclear power, he also said the Trump administration had no intention of trying to oust Kim Jong Un.

US state department spokeswoman Heather Nauert said in a statement: “Despite assurances that the United States is not interested in promoting the collapse of the current regime, pursuing regime change, accelerating reunification of the peninsula or mobilising forces north of the DMZ, North Korean officials have shown no indication that they are interested in or are ready for talks regarding denuclearisation.”

The Korean Peninsula remains in a technical state of war, and the Demilitarized Zone divides North and South Korea.

Since US president Donald Trump took office in January, the US has restored a diplomatic back-channel between the State Department and North Korea’s mission at the United Nations.

That has traditionally been a way for the two sides to communicate because they lack formal diplomatic ties.

The main aim of the initial contacts was to seek the freedom of several American citizens imprisoned in North Korea, although US officials have told reporters that there are broader discussions about US-North Korean relations.

Rex Tillerson’s trip is helping lay the groundwork for a November state visit by Mr Trump, part of a five-nation swing through Asia

Those contacts, however, have failed to reduce the deep mistrust between the adversaries and it is unclear to what extent they have endured the current spike in tensions.

North Korea has in recent months tested long-range missiles that potentially could reach the US, and on September 3 conducted its largest nuclear test explosion to date.

The stand-off has entered a new, more dangerous phase since then as Mr Kim and Mr Trump have exchanged personal insults and threats of war.

“I think the most immediate action that we need is to calm things down,” Mr Tillerson said. 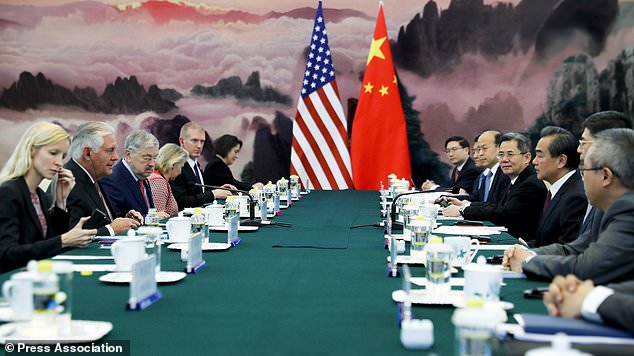 “They’re a little overheated right now. And I think we need to calm them down first.

“Obviously it would help if North Korea would stop firing off missiles. That would calm things down a lot.”

Mr Tillerson’s visit to Beijing is helping lay the groundwork for a November state visit by Mr Trump, part of a five-nation swing through Asia.

The US leader has pressed for sterner measures against the North by China, the North’s chief trading partner and source of aid and diplomatic support.

Beijing adamantly opposes steps that could bring down Mr Kim’s government, but appears increasingly willing to tighten the screws. China has agreed to tough new UN penalties that would substantially cut foreign revenue for the isolated North.