Time for Brexit Plan C? May on the verge of ditching talks with Labour

A gang of Theresa May’s former cabinet ministers including Boris Johnson today pleaded with her to reject Jeremy Corbyn’s demand for a soft Brexit deal warning her it would destroy the Tory party.

The Prime Minister will come under intense pressure from ministers at a Cabinet meeting this morning to pull the plug on cross-party talks today.

A group of 13 former ministers and senior Tories had written to Mrs May, saying she will lose the ‘loyal middle’ of her party if she strikes a deal with Labour.

The letter, signed by Boris Johnson, Dominic Raab, Esther McVey and chairman of the 1922 committee Sir Graham Brady, warned of the risk of a ‘democratic deficit’ if a backroom deal with the opposition is hatched.

Former Defence Secretary Sir Michael Fallon, who also signed the note, said today he would rather stay in the EU than sign up to the customs union after Brexit – and urged the Prime Minister to sack off talks with Mr Corbyn now.

He said: ‘The talks clearly aren’t getting anywhere. It’s a blind alley. It’s far better to concentrate on the arrangements in Northern Ireland, the one thing there is a majority for. If a [Labour] deal is going to include a permanent customs union then frankly we are better off staying in the EU because at least then we’d have a voice. We can’t say we are leaving then half-stay in it’. 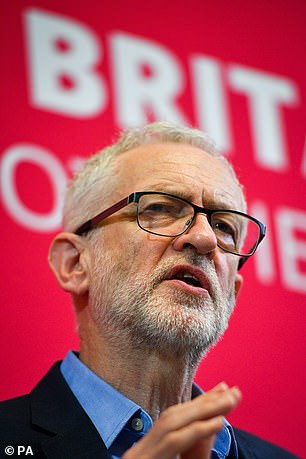 Mrs May is set to let MPs decide on how to break the Brexit deadlock as her own furious ministers urged her to end talks with Labour today.

The Prime Minister will offer the Commons a series of ‘definitive votes’ to try to settle the matter after the European elections conclude on May 23 – a plan backed by remainers in her cabinet.

Brexiteer ministers including Andrea Leadsom are said to prefer bringing back her deal to the Commons and concentrating on getting the EU to change the Irish backstop clause of Britain’s divorce deal.

Some 13 former ministers, together with the chairman of the backbench 1922 Committee, Sir Graham Brady, have written to the Prime Minister urging her not to concede Labour’s key demand of a customs union and potentially a second referendum.

The signatories also include Gavin Williamson, who she sacked as defence secretary this month.

The group’s letter, which was published by The Times, read: ‘We are writing to urge you not to agree any customs union with the Labour Party.

‘A customs union with the EU is both bad policy and bad politics. On policy, we would be stuck in the worst of both worlds.

‘We believe that a customs union-based deal with Labour will very likely lose the support of Conservative MPs, like us, who backed the Withdrawal Agreement in March.

‘More fundamentally, you would have lost the loyal middle of the Conservative Party, split our party and with likely nothing positive to show for it. No leader can bound his or her successor, so the deal would likely be at best temporary, at worst illusory.

‘We urge you to think again, and for the Conservative Party to stay true to our principles and promises, and to reject a customs union solution with Labour.’ 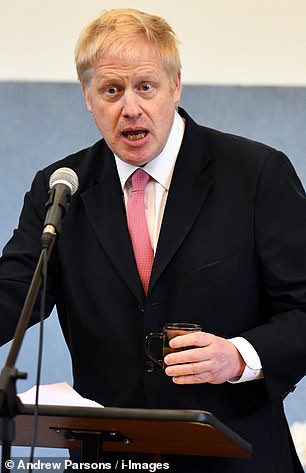 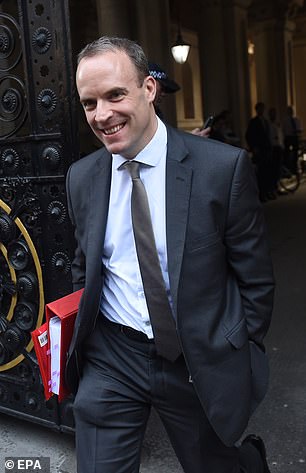 The letter, signed by Boris Johnson, Dominic Raab, Esther McVey and chairman of the 1922 committee Sir Graham Brady, warned of the risk of a ‘democratic deficit’ if a backroom deal with the opposition is hatched

Ministers, led by Mrs May’s deputy David Lidington, held fresh talks with their Labour counterparts last night in the hope of finding an acceptable compromise. But senior figures on both sides said the compromises involved were likely to prove unacceptable.

What is a confirmatory referendum and how would it work?

Any second referendum on Brexit is expected to be  ‘confirmatory’, which is when the public has the chance to approve or reject a proposition of the Government.

If it happened it would most likely be a binary yes/no choice whether to accept Theresa May’s Brexit deal, either changed after a deal with Labour, or unchanged.

Whichever option won more votes would then be implemented.

One minister said: ‘Talking to Corbyn is killing us with the party in the country. It’s time to put the whole thing out of its misery.’

Labour is also split on the issue and Mr Corbyn told a fractious meeting of his MPs last night: ‘The idea that Tory MPs are going to come round any time soon to accept the deal is fanciful.’

One Tory source with knowledge of the talks said Mr Corbyn appeared open to the possibility of a deal, but was being held back by pressure within his party to secure a second referendum.

Communities Secretary James Brokenshire, one of Mrs May’s closest allies, said a second referendum would amount to ‘not giving effect to the original vote’.

He said it looked ‘very, very difficult to identify a deal with Labour’ that could win approval from Parliament.

What would ‘definitive’ Brexit votes involve and how would it work?

MPs would vote on whether they back Theresa May’s Brexit deal – and  alternatives to it – on the proviso the PM would then to act on their wishes.

Definitive votes have never been held before in the UK, but it would be a similar system to the indicative votes held in Parliament in March and April.

MPs would be presented with a ballot paper listing all the selected proposals and would vote ‘aye’ or ‘noe’ to whichever ones they choose.

They can vote for just one, or all of them.

The Government would not be legally obliged to swallow the results but Mrs May could promise to take the top option forward, but only if Jeremy Corbyn also agreed to the process.

Mr Williamson savaged Mrs May over the talks with Labour at the weekend, describing the initiative as ‘politically naïve’ and ‘doomed to fail’. Huw Merriman, parliamentary aide to Chancellor Philip Hammond, said Mr Williamson was ‘probably right’, adding: ‘The Labour Party will not vote for something that doesn’t have a (second referendum) attached to it.’

Brexiteer ministers, including Liam Fox and Commons leader Andrea Leadsom, are expected to urge Mrs May to step up preparations for a possible No Deal Brexit.

It came as Michael Gove appealed to Tory grandees not to force the Prime Minister out before she delivered Brexit.

In a series of interviews, the Environment Secretary said getting Brexit ‘over the line’ was ‘more important’ than forcing Mrs May to set out a timetable for her departure.

In a stinging editorial yesterday, the Tory ‘Bible’ Conservative Home urged the committee to force her out this week.

But Mr Gove – who refused to rule out running to succeed Mrs May as PM – urged them to give her another stay of execution. 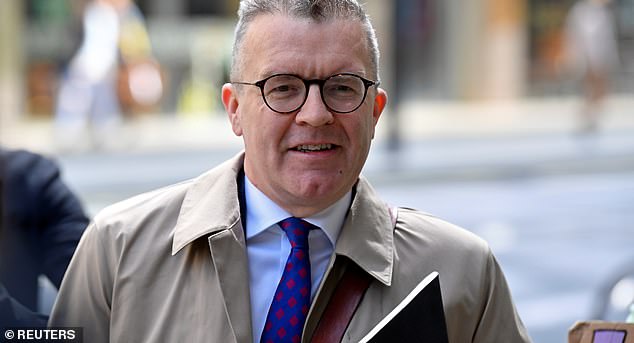 Meanwhile Labour’s deputy leader, Tom Watson says a second referendum is the only way to deliver on a Brexit deal

He told Sky News: ‘I think it’s important for us all to acknowledge that she’s very graciously said that she will stand down when the withdrawal agreement is ratified. 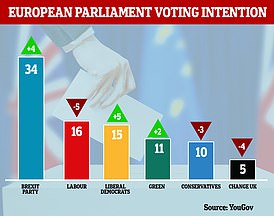 The Tories face the ignominy of finishing fifth in the EU elections as Nigel Farage continues to give them a battering, a new poll revealed today.

The Brexit Party is racing ahead with a predicted 34 per cent of the vote on May 23 – but Theresa May’s Conservatives are heading for just 10 per cent, a YouGov survey has found.

The collapse in support for the Conservative Party is piling pressure on Mrs May to set a date for her departure from No 10 – but Labour is also down five points on 16 per cent, with confusion over their Brexit position continuing.

He said: ‘I would appeal to their loyalty, to their tradition and to say that the Conservative Party will get a new leader at some point. We have gone from 40 per cent to 10 per cent in the polls and those are Eurosceptics. It is forgetting about them that is destroying the Tory party’s vote’.

‘It’s all our priority in politics to make sure that referendum mandate is honoured and then to give Theresa the time, space and dignity to leave in a way that she believes is right.’ Conservative Home’s editor Paul Goodman, a former Tory MP, acknowledged that the committee faced a ‘difficult decision’ – but warned the party could be plunged into ‘oblivion’ if the PM was allowed to stay.

But he said it was now clear that ‘the longer May remains Prime Minister, the deeper the damage to the Party and the country’.

He added: ‘However unpalatable it may be, the Committee must, if she refuses this week to go by the end of the summer, change the leadership challenge rules immediately… We are well aware that the most painless course for them is to opt for mañana. But the wait for tomorrow risks marginalisation – even oblivion.’ The analysis was backed yesterday by Jacob Rees-Mogg, who praised Mr Goodman as a ‘sage commentator’.

Mr Rees-Mogg said that the PM’s unpopularity with activists made it impossible to see how she could continue as Tory leader.

He added: ‘At the moment, nobody is saying anything supportive of the leader or the leader’s policy and the majority of people at associations I’m addressing, and these are members of the Party, tell me they’re voting for the Brexit Party. So, I just don’t see how a leader can go on so removed from the support base of the Party membership.’ Calls for Mrs May have intensified since this month’s local elections when the Conservatives lost 1,300 seats.

Ministers now fear a bloodbath at the hands of Nigel Farage’s Brexit Party next week when the country goes to the polls for European parliament elections that would not have taken place if the UK had left the EU on time.

A YouGov poll yesterday found that the Tories were on course to slump to fifth place behind the Greens in next week’s elections.

The survey for the Times put the Brexit Party on 34 points, well ahead of Labour on 16, the Liberal Democrats on 15 and the Greens on 11. The poll put Tory support on just 10 per cent.

Meanwhile, Jeremy Corbyn has come under fire from both pro-Remain and pro-Brexit MPs in his party amid complaints that confusion over Labour’s position cost them votes in the council elections.

At the weekly meeting on Monday of the Parliamentary Labour Party, pro-Remain MP Peter Kyle told the Labour leader their message on a second referendum had been too complicated and had left voters perplexed.

‘I urge you to simplify our policy so people realise we are speaking with absolute sincerity,’ he told Mr Corbyn.

Pro-Brexit MP John Mann called on Mr Corbyn to give Labour MPs a free vote on Brexit issues to reflect the divisions within the party and the country.

‘Labour voters are divided in a very big way,’ he told him.

‘If you don’t get this right you cannot be prime minister.’

Mr Corbyn acknowledged the MPs’ ‘frustrations’ and said he understood the need to simplify their message, telling them: ‘I get that.’

Earlier, Sir Keir and Labour deputy leader Tom Watson threw their weight behind calls for any Brexit deal to be put to a second referendum – something Mr Corbyn has resisted.