Time to avoid Sushi for lunch? The raw fish that’s full of parasites and pumped with carbon monoxide

Sushi’s reputation as a healthy, vitamin-rich delicacy is at risk of being blown to pieces amid revelations the raw fish it contains may be pumped with deadly gas or ridden with parasites.

Australians eat more than 110 million servings of sushi and sashimi every year, despite experts warning parasites and harmful bacteria may be present in the seaweed-wrapped rolls and raw fish slices.

As the popularity of the Japanese snacks continue to rise, so too do the gruesome tales of hidden ingredients, ghastly infections and shoddy operations in foreign factories.

Sushi’s reputation as a healthy, vitamin-rich delicacy is being blown to pieces (stock image) 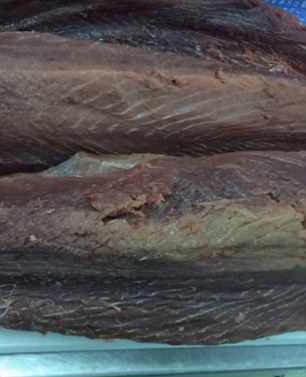 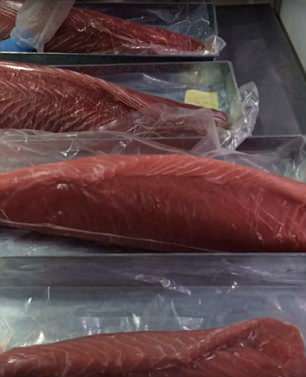 Some overseas suppliers are pumping fish with carbon monoxide. The gas preserves tuna and helps maintain its bright pink colour (right) when it would have naturally turned brown (left)

Carbon monoxide – an odourless, tasteless gas – preserves tuna cuts and helps maintain its bright pink appearance when it would have naturally turned brown. The process means Australians could be eating fish that was caught two years earlier.

The Department of Agriculture and Water Resources told Daily Mail Australia there was proof such fish was being imported into the country and said it was moving to stamp out the practice.

Meanwhile, a fisherman who caught a Yellowtail Kingfish – often used in the production of sushi and sashimi in Australia – found eight parasitic worms when filleting the fish last month. 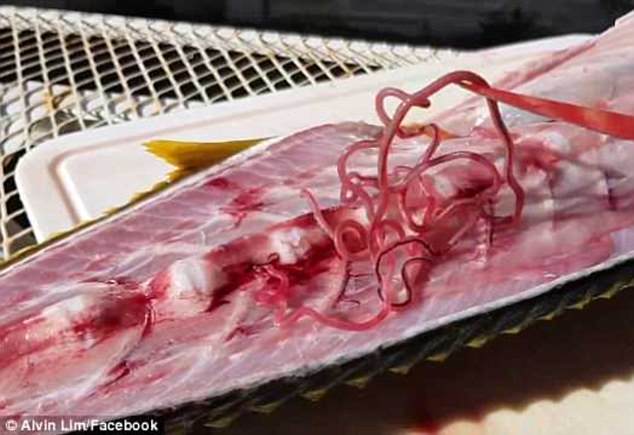 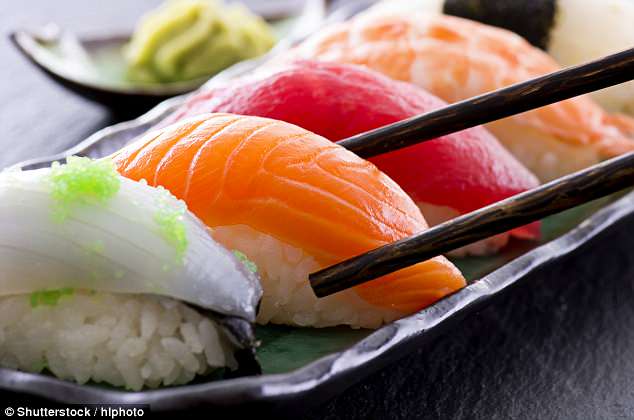 ‘Seems to be a common thing here in the west as it’s not the first time,’ the fisherman wrote on Facebook after he caught the fish off the Western Australia coast.

Alan Lymbery of Freshwater Fish Group told Daily Mail Australia the fish was full of roundworms – or nematodes – which can be transferred to humans if eaten raw.

While there are opportunities to identify such parasites in the gutting or filleting process, they are often not discovered before wrecking havoc on the human body.

A Californian man who had eaten sushi rushed himself to hospital after discovering a tapeworm that was ‘wiggling out’ as he sat on the toilet. 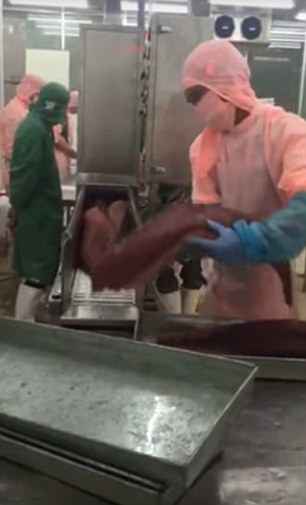 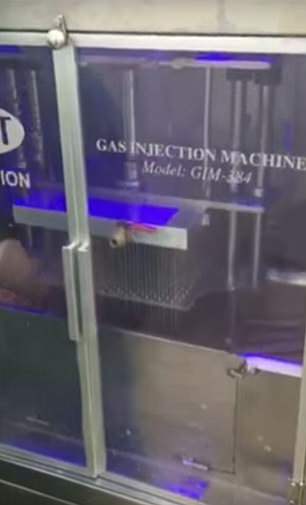 IS SUSHI WORSE FOR YOUR HEALTH THAN A BIG MAC? 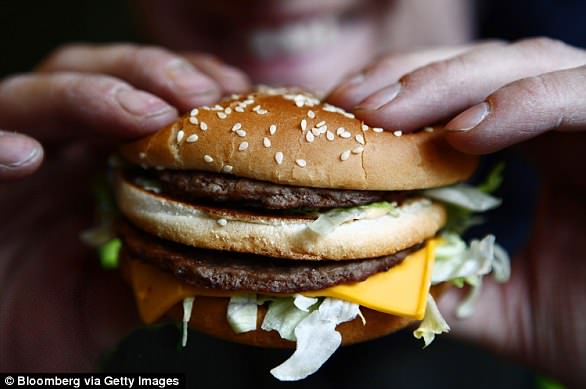 An overseas investigation found some servings of sushi contain more calories than a Big Mac – or are as carbohydrate-heavy as seven-and-a-half slices of white bread.

British broadcaster Channel 4 revealed the Japanese delicacy will give you the benefits of fish oils — which support the heart, brain and skin — but may not be so good for your waistline.

Though the firm did point out the sushi box contains almost double the weight of food.

The story was revealed by Dr. Kenny Bahn on the podcast This Won’t Hurt A Bit earlier this year.

When the doctor was sceptical of his tapeworm claim, the man showed him proof.

‘I take out a toilet paper roll, and wrapped around it of course is what looks like this giant, long tapeworm,’ Dr Bahn said, adding the parasite’s length was about 1.5-metres.

Hospital staff assumed the man must have recently travelled overseas, but he revealed he hadn’t. He just ate raw fish on an almost daily basis. 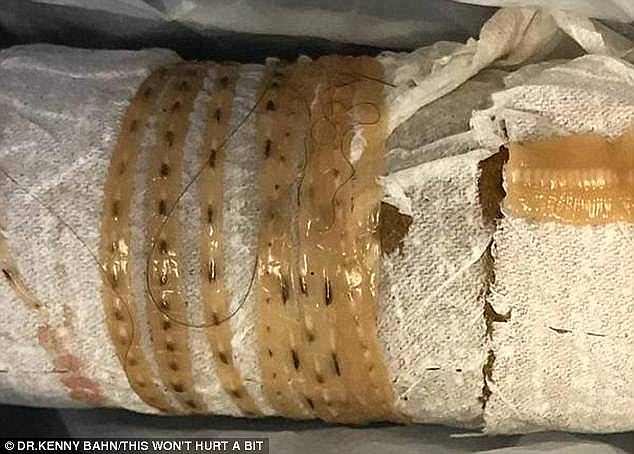 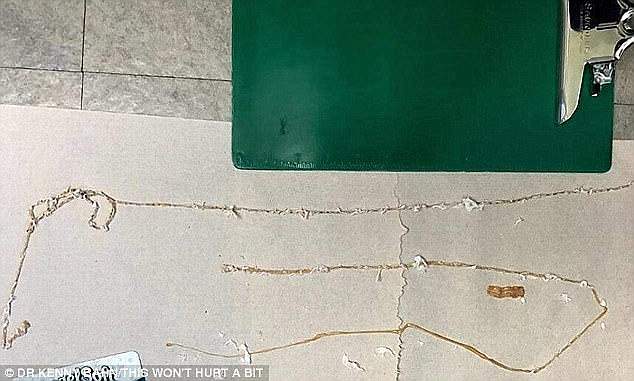 In Australia, where sushi and sashimi contain mostly tuna or salmon, such cases are incredibly rare.

The country’s farmed salmon don’t contain tapeworm and fishmongers are careful to check for larvae when inspecting tuna at local sales.

Australia’s only documented case of fish tapeworm infection in a human, when a child who regularly ate raw fish was admitted to hospital in South Australia in 2015. 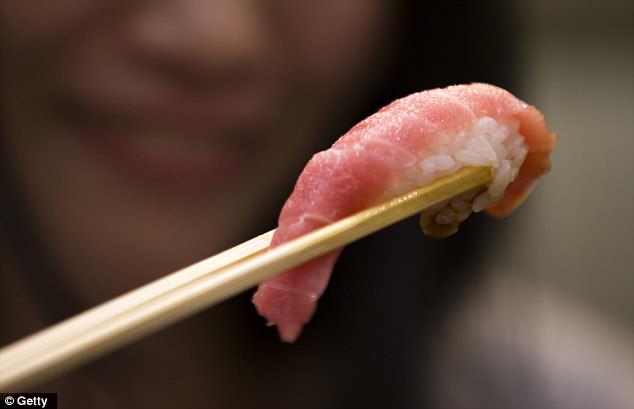 HOW CAN HUMANS GET TAPEWORM FROM EATING SUSHI? 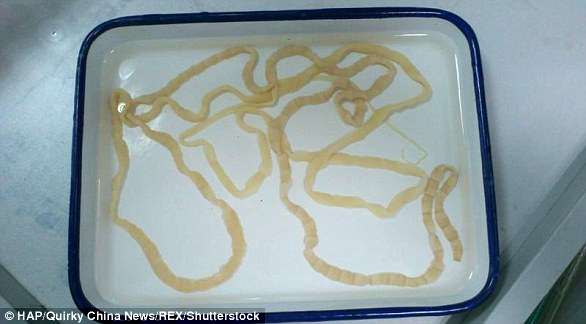 This 2.5m long tapeworm was removed from a woman in Xiamen, southeast China, in 2014

Humans can contract tapeworm infections from sushi by eating raw fish that has been infected with the worm in its larvae stage.

When fish eat tapeworm eggs, the hatching larvae attach themselves to the intestinal wall of the fish and the worms infect the fish flesh.

Because sashimi is not cooked, the larvae can in turn transfer into the flesh of any human that eats the fish.

Once a human is infected, a tapeworm will grow inside the intestine to a length of up to 15m over a period of weeks.

It can survive for years and go undetected for weeks or months, in turn releasing its own eggs that infect other parts of the human body.

Symptoms include fatigue, constipation and abdominal discomfort – which can be so mild the victim may not notice anything is wrong.

If larvae begin to migrate to other parts of the body they can start to eat away at the liver, eyes, heart or brain and cause life-threatening conditions.