Shameless star Tina Malone was arrested and cautioned for possession of cocaine on Friday night, after a performance in pantomime Sleeping Beauty.

And the 54-year-old actress has reportedly broken her silence over the arrest and subsequent pantomime axe in a Facebook post shared on Sunday, reports The Mirror Online.

In the post, the star reportedly wrote her life had been ‘ruined’ by the incident and added that her daughter ‘hates her’ and that her toyboy husband Paul Chase, 35, had been left ‘devastated’.

Shock: Tina Malone has reportedly broken her silence over the arrest and subsequent pantomime axe in a Facebook post shared on Sunday, reports The Mirror Online 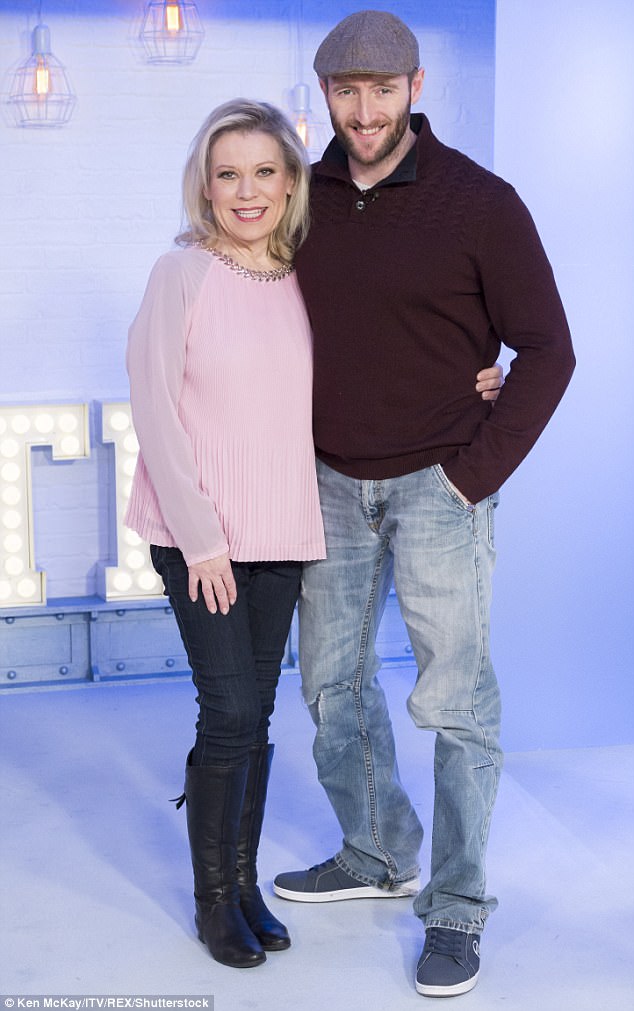 Breaking silence; In the post, the star reportedly wrote her life had been ‘ruined’ by the incident and added that her daughter ‘hates her’ and that her toyboy husband Paul Chase, 35, had been left ‘devastated’

The post reads: ‘Thank you to all those who supported me through this horrific time, my mother is ill because of the shock, my daughter now utterly hates me and thinks I am a drug addict, my hubby is devastated, I have not had my last payment so those that vilify me, hate me [sic] fill your boots.

‘I’m distraught, devastated, my life is ruined the repercussions are unbelievable. Have i ever drunk, taken drugs etc etc yes yes.’

MailOnline has contacted a representative for Tina for comment.

It was also claimed Tina caused chaos backstage at the Cloud 9 Theatre in Barrow-in-Furness, Cumbria by locking herself in the only working toilet for hours, reports Mirror Online. 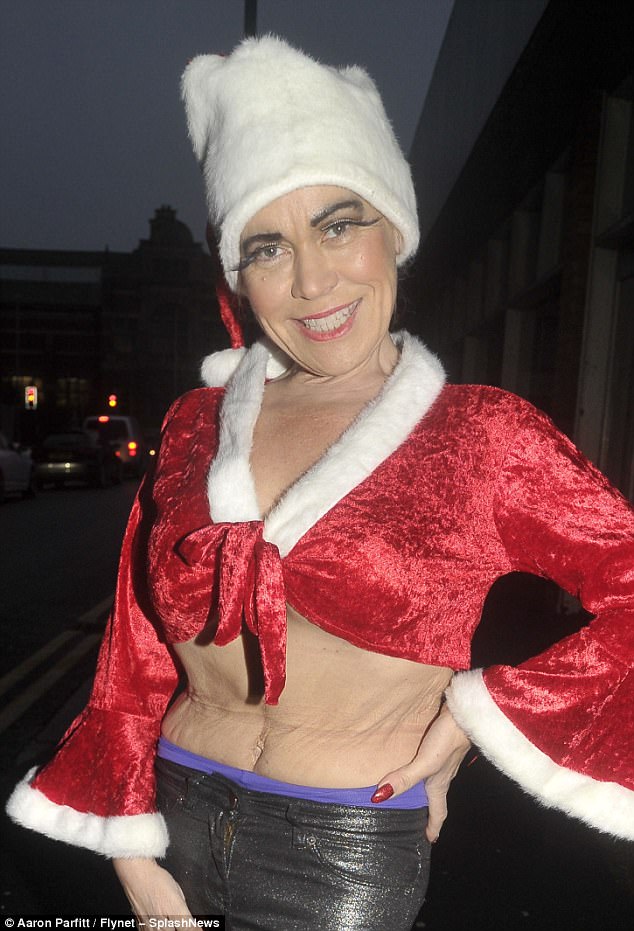 Flesh-flashing: The 54-year-old actress was all smiles as she dressed up as a sexy Santa hours before her arrest

The website reports that according to a former cast member, the star’s alleged long sessions in the toilet left child actors so desperate that they would wet themselves.

MailOnline has contacted a representative for Tina for comment.

A source told the website: ‘She was an absolute nightmare. There was only one working toilet backstage and she would just sit in it for hours saying she was smoking.

‘If you tried to go in she would scream and shout at you, even the kids were sworn at.

‘With a cast of children the toilet needed to be available but Tina didn’t care – she just wanted to stay in there. And when she wasn’t in the toilet she was in her dressing room – surrounded by rolls of twenty pound notes.’ 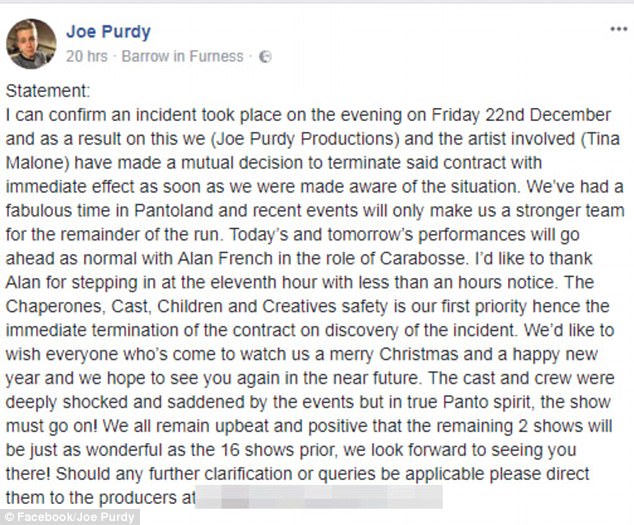 Sad: Show director and producer Joe Purdy posted a statement to Facebook confirming Tina’s sacking from the show and said the cast and crew were ‘shocked and saddened’ by the incident

A spokesman for Cloud 9 Theatre declined to comment when approached by MailOnline but confirmed that Tina would not be performing in the play’s final show on Sunday.

Show director and producer Joe Purdy posted a statement to Facebook confirming Tina’s sacking from the show and said the cast and crew were ‘shocked and saddened’ by the incident.

He wrote: ‘I can confirm an incident took place on the evening on Friday 22nd December and as a result on this we (Joe Purdy Productions) and the artist involved (Tina Malone) have made a mutual decision to terminate said contract with immediate effect as soon as we were made aware of the situation.

‘We’ve had a fabulous time in Pantoland and recent events will only make us a stronger team for the remainder of the run. Today’s and tomorrow’s performances will go ahead as normal, l with Alan French in the role of Carabosse.

Festive: Showing off her trim figure, the star paired the tiny top with glittery leather leggings that hugged her slender legs, which she paired with black ankle boots

I’d like to thank Alan for stepping in at the eleventh hour with less than an hours notice. The Chaperones, Cast, Children and Creatives safety is our first priority hence the immediate termination of the contract on discovery of the incident.

‘We’d like to wish everyone who’s come to watch us a merry Christmas and a happy new year and we hope to see you again in the near future. The cast and crew were deeply shocked and saddened by the events but in true Panto spirit, the show must go on!

‘We all remain upbeat and positive that the remaining 2 shows will be just as wonderful as the 16 shows prior, we look forward to seeing you there!’

Tina herself appeared to comment on the incident writing ‘Thanks for y9ur support joe you and i both now know what happened,funny how my costume was altered to fit me the hour after i left the theatre!!!!!, good luck joe x'(sic) 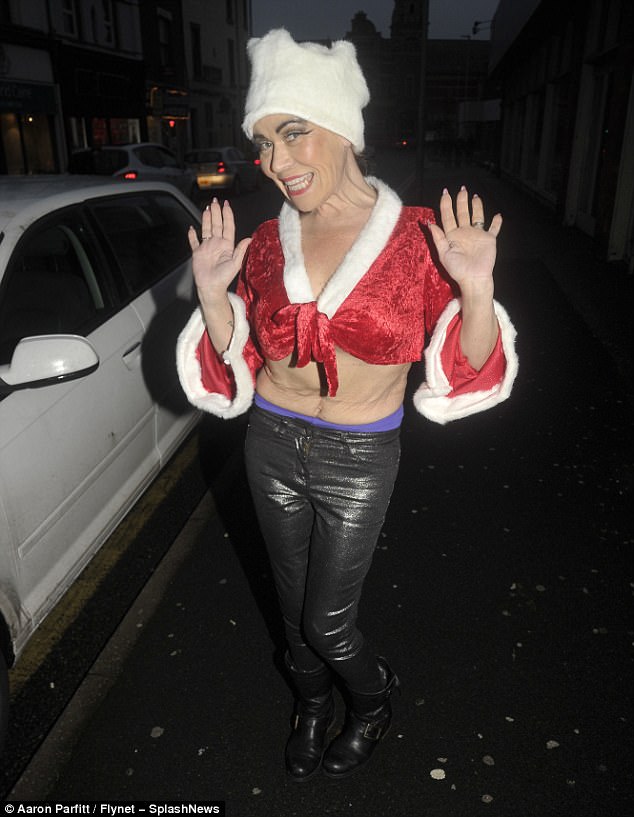 Before the storm: The star put on a playful display hours before her arrest after the panto

Hours before the shock arrest , a cheerful Tina dressed up as a sexy Santa to pose outside the theatre before her performance.

The star flashed her midriff  in a festive and very skimpy red and white velvet crop-top as she confidently  worked the cameras.

Showing off her trim figure, the star paired the tiny top with glittery leather leggings that hugged her slender legs, which she paired with black ankle boots.

Flashing her purple underwear as she smiled for the camera, the actress also donned a furry white and red Father Christmas hat. 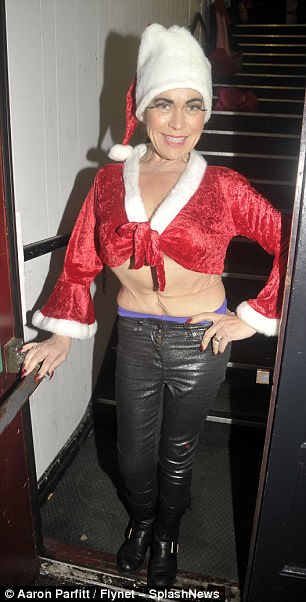 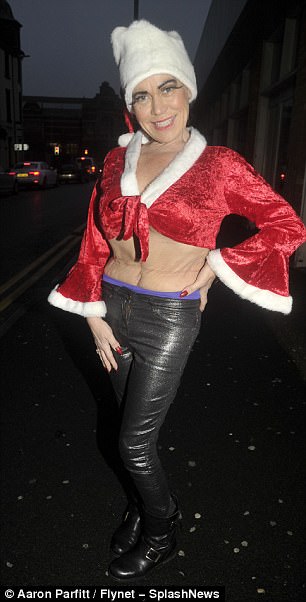 Glittering: Tina flashed her midriff in the tony crop-top as she posed on the stairs 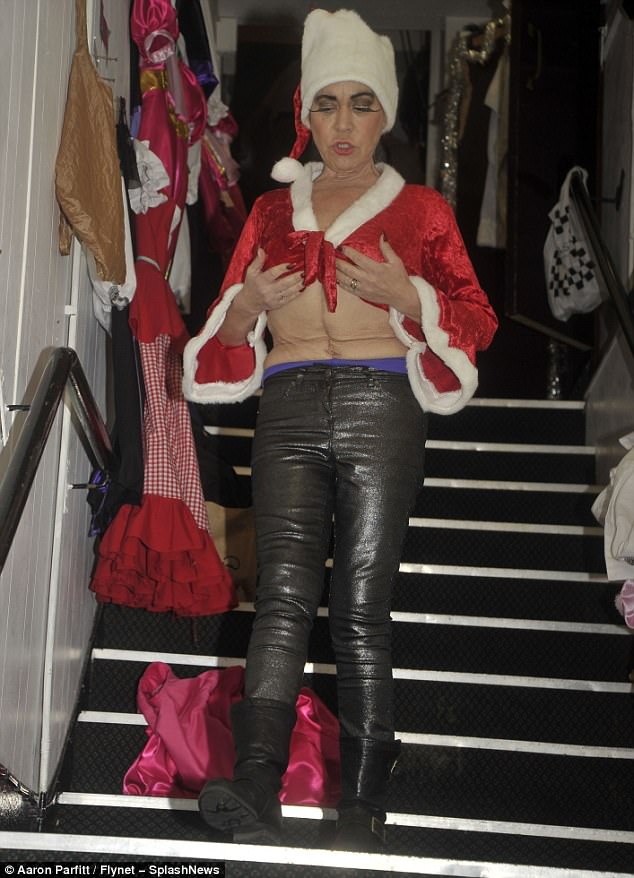 Hands on: Appearing to be trying to avoid a wardrobe malfunction, the star held onto her chest as she descended the stairs before her photocall

Animated: Tina  pulled a series of animated poses as she enjoyed the photocall 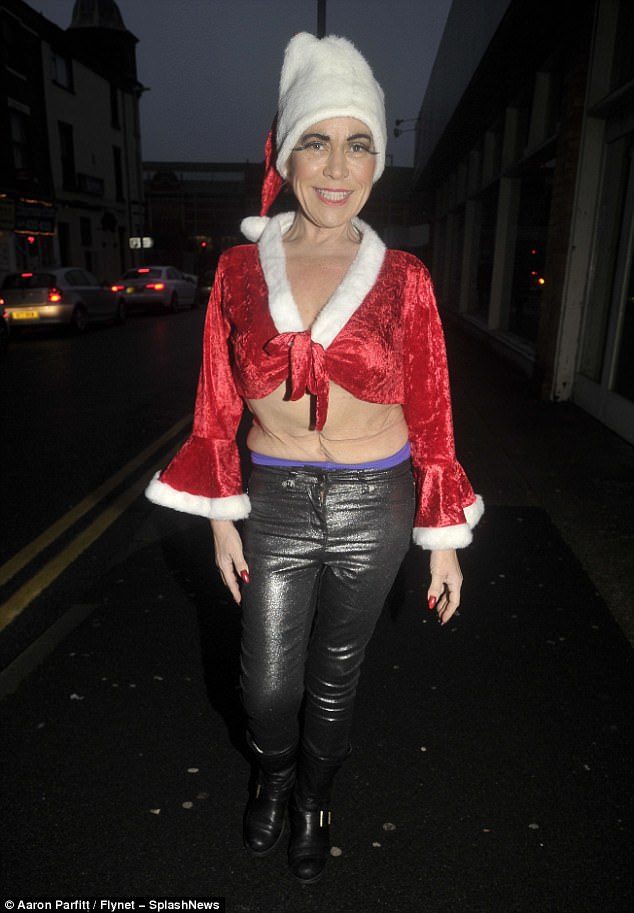 Skimpy: Flashing her purple underwear as she smiled for the camera, the actress also donned a furry white and red Father Christmas hat

Appearing to be trying to avoid a wardrobe malfunction, the star held onto her chest as she descended the stairs before her photocall.

The star allegedly asked her fellow pantomime cast members if anyone had seen her ‘little bag of snow’ shortly before she was arrested on suspicion of possessing cocaine.

Tina was starring in the performance of Sleeping Beauty on Friday with her four-year-old daughter in attendance.

Staff reportedly tipped off police after suspecting the actress had taken cocaine during both rehearsals and performances. 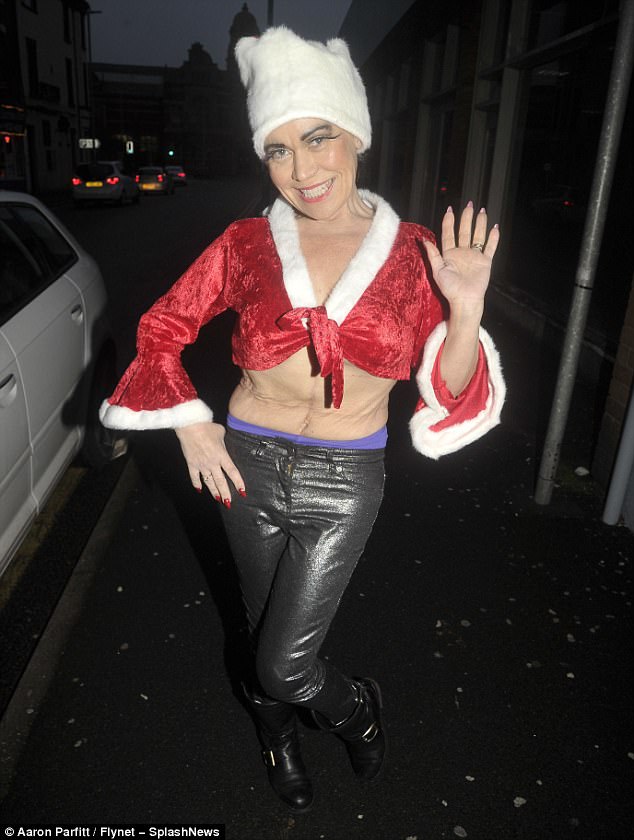 Playful: The star waved at the cameras as she posed in the street before the performance

Confident: Tina couldn’t keep the smile off her face as she worked some poses in her leather trousers 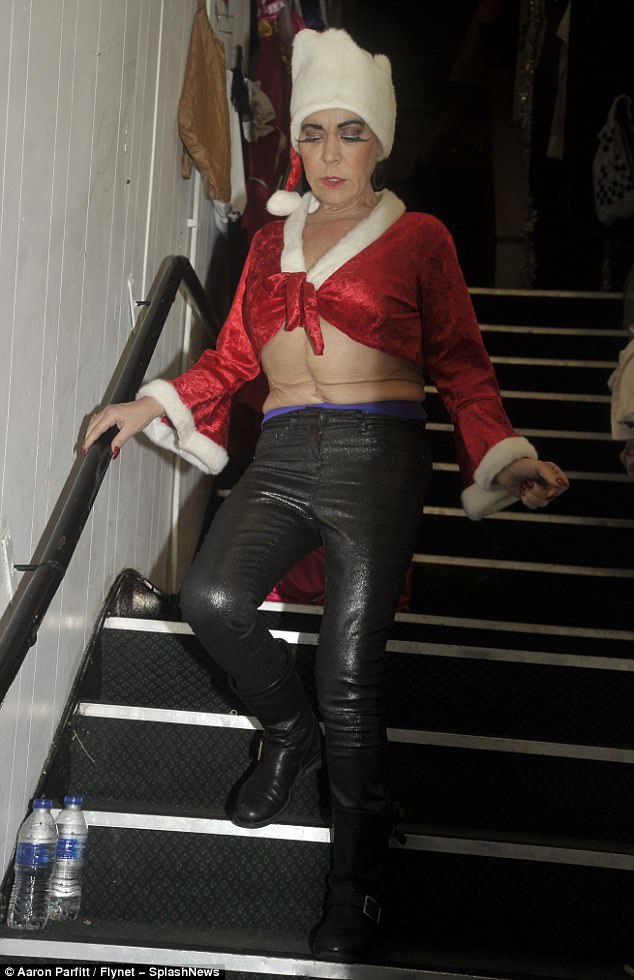 Trim: Tina showed off her slim figure as she climbed down the stairs before the performance

Christmastime: Tina was influenced by a sexy Santa as she posed for the cameras 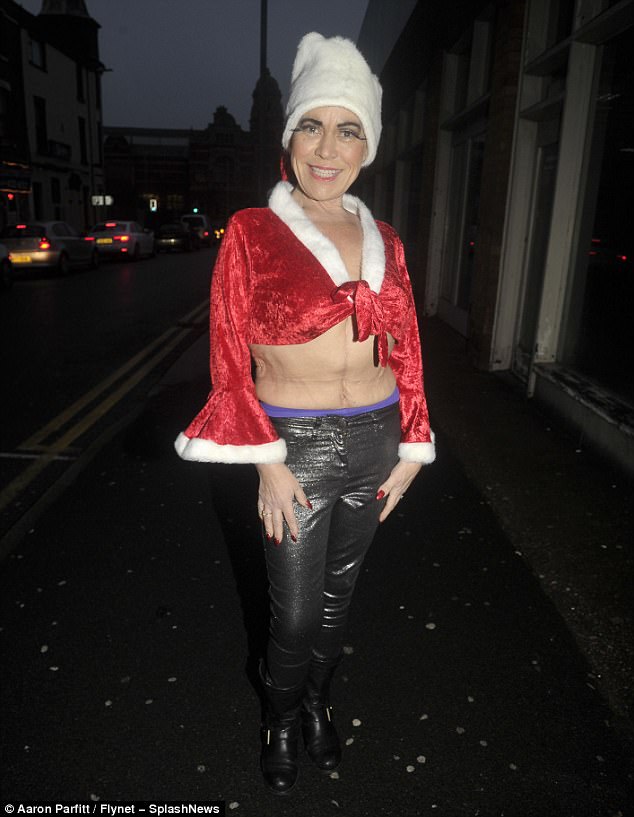 Happy: Tina cracked a relaxed smile just hours before she was arrested after the panto 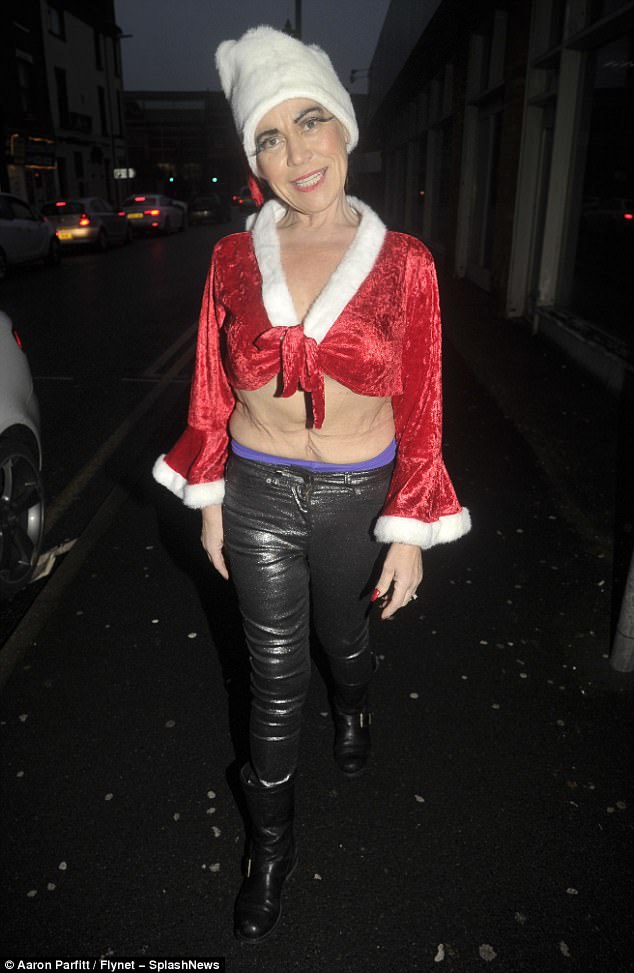 Strut: The star showed off her midriff and a hint of cleavage in the saucy crop-top

A source said the star was asking whether anyone had seen her ‘little bag of snow’ after it reportedly went missing.

And a show insider told The Mirror the mother was behaving ‘diva-ish’ and constantly complaining about the accommodation the theatre had put her up in.

Cumbria police confirmed the actress had been arrested and received a caution for the offence.

She was photographed between performances last night wearing her costume while walking back from a nearby McDonald’s restaurant.

‘As she came off stage, she heard a rumour police had been tipped off she was using cocaine,’ a source told the newspaper . 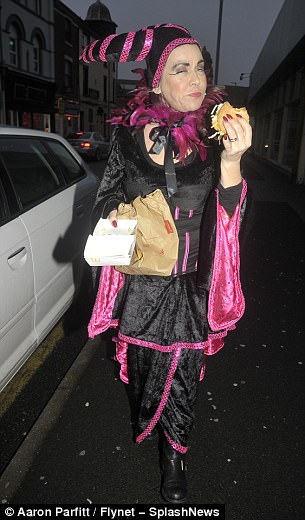 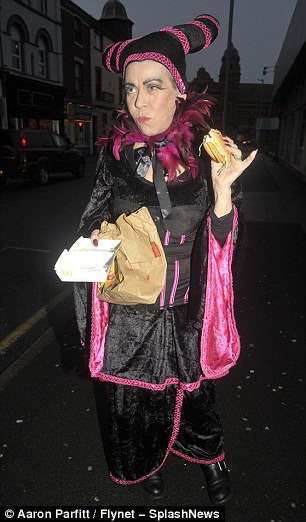 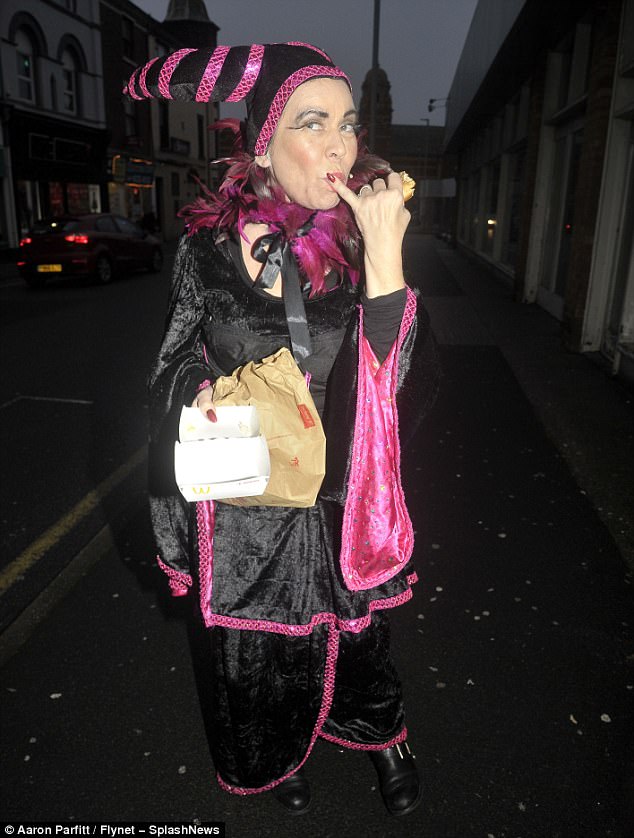 A spokesman for Tina Malone was unavailable for comment today 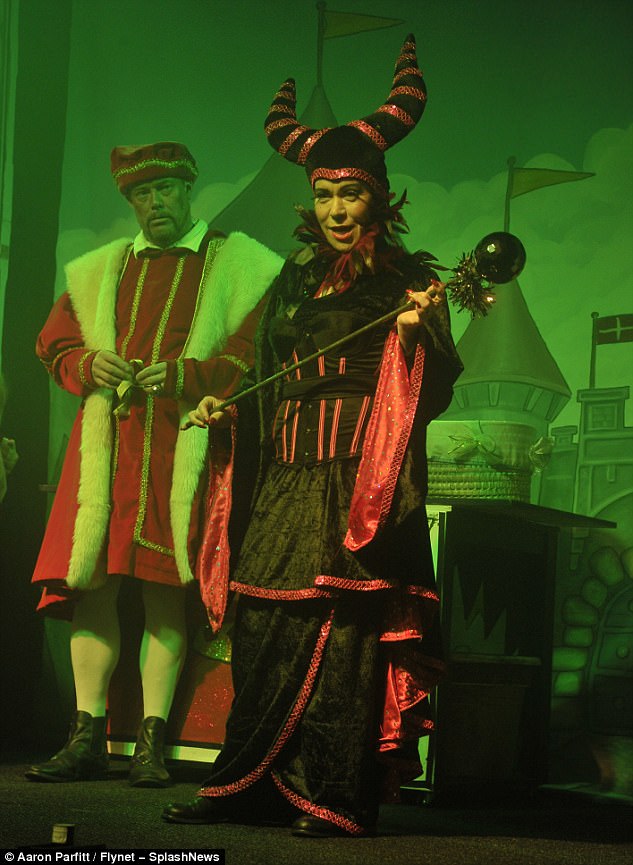 Ms Malone, pictured on stage in Barrow-in-Furness yesterday, was arrested soon after the show after she was reported for possession with cocaine

‘She tried to get a taxi, but police stopped her in time and took her inside the venue to search her.

‘She begged the police not to handcuff her, and seemed very worried.’

Cumbria Police said: ‘Police were called at 8:21pm, yesterday (22nd December), to the report of a female being in possession of an illegal substance.

‘The incident occurred on Dalkeith Street, Barrow. A 54-year-old woman, from Merseyside, was arrested on suspicion of being in possession of a class A drug.

‘The woman was detained whilst she helped police with their enquiries. She was later cautioned for the offence.’

She was replaced by an understudy in today’s performances. 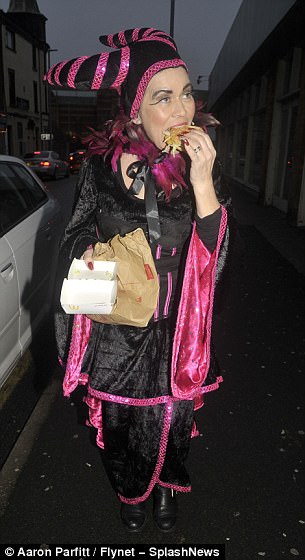 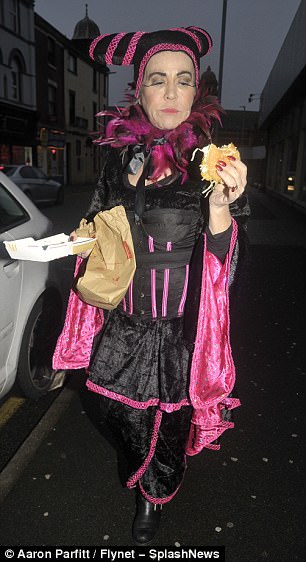 The Shameless actress was earlier seen eating a McDonald’s between performances in Barrow-in-Furness, Cumbria last night, just hours before she was led away by police

Barrow Panto said: ‘During today’s performance the part of Carabosse will be played by the incredible Alan French. No further comment will be made at this time.’

The Panto is due to finish its run tomorrow.

She also shared the stage with Big Brother contestant, Ellie Young, who played the princess.

Tina is best known for her role as Mimi Maguire in hi Channel 4 comedy drama Shameless, and has also starred in Dinnerladies and Brookside.

A representative for the actress was not available for comment last night. 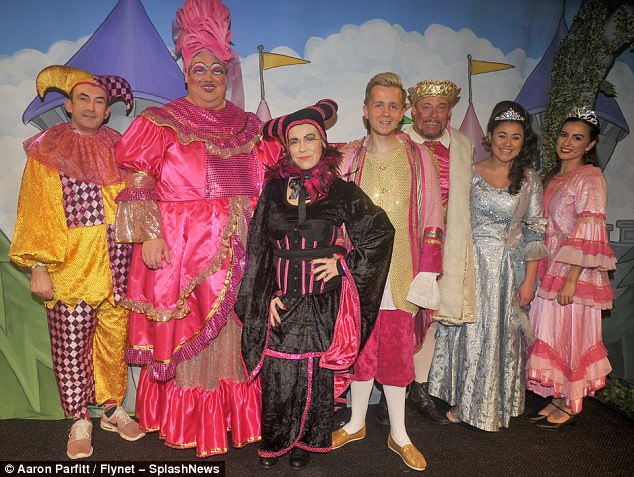 The Shameless star pictured with the cast of Sleeping Beauty. The actress, who is from Liverpool, was playing the role of the wicked fairy godmother Carabosse in the pantomime 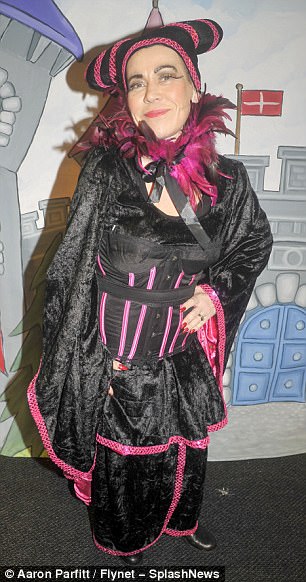 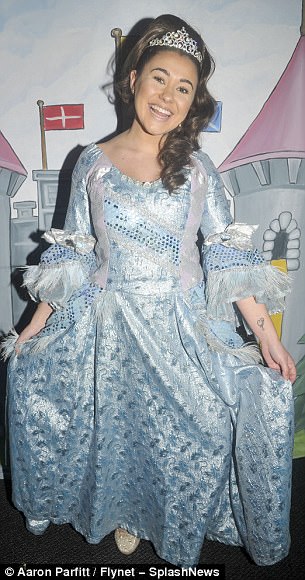 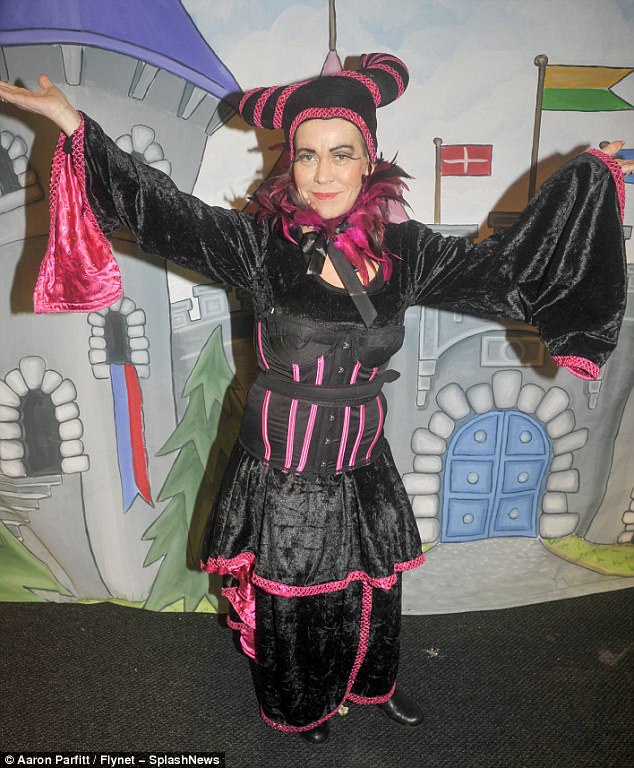 The actress had performed in a pantomime performance of Sleeping Beauty at a theatre in Barrow-in-Furness, Cumbria