A woman has revealed a vile list of 15 ‘improvements’ that were sent to her by a Tinder date, three months after their only meeting.

Kimberley Latham-Hawkesford, 24, from Morecambe, went on a first date with a man whose Snapchat profile names him as Luke James.

Ms Latham-Hawkesford said that the date was going well so the pair decided to move on to a pub in the Lake District for some food.

Kimberley Latham-Hawkesford, 24, from Morecambe, went on a first date with a man who sent her a list of ‘improvements’ three months after their first and only date

That’s when things started to take a turn, according to Lad Bible.

While at the pub Luke asked Ms Latham-Hawkesford whether she would ever consider getting plastic surgery and suggested different places she should shop for clothes before their next meeting.

He then proceeded to show Ms Latham-Hawkesford his bank balance on his mobile phone after she offered to pay for dinner.

It wasn’t until three months after the disaster date that Ms Latham-Hawkesford would hear from her Prince not-so-Charming again.

He messaged her on Snapchat to say: ‘Hello Kimberley, I know we went on a date quite a while ago now but I’d like to explain why I haven’t messaged you.

‘I feel like you could have made the date much better, here’s a few reasons why.

‘I apologise if I offend you.’

He carries on to say: ‘If you lost some weight you would look incredible. Maybe about a stone or so.

‘You are very pale. I know you aren’t a fan of the sun but a bit of fake tan won’t hurt.

‘You need to dye your hair a normal colour and add extensions. Longer hair is much more attractive.

‘Your lips have gone down so you should think of getting more filler.’

After telling her to lose weight, use fake tan, dye her hair and get extensions and get more lip filler, he goes on to say she was wearing too much makeup and she needed to look natural.

He said: ‘You need to look more natural.

‘Just make yourself look decent but don’t overkill it.

As the deluge of insults continue, he says: ‘You just seemed a bit stuck up.

‘Sort your personality out.’

Ms Latham-Hawkesford said: ‘My only tip for him is to respect women as his behaviour is disgusting’. 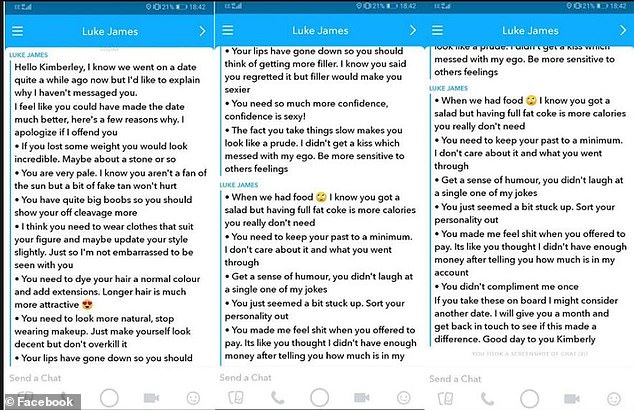 The vile list of 15 ‘improvements’ included requests to get more lip filler, wear fake tan, dye her hair and show off her cleavage 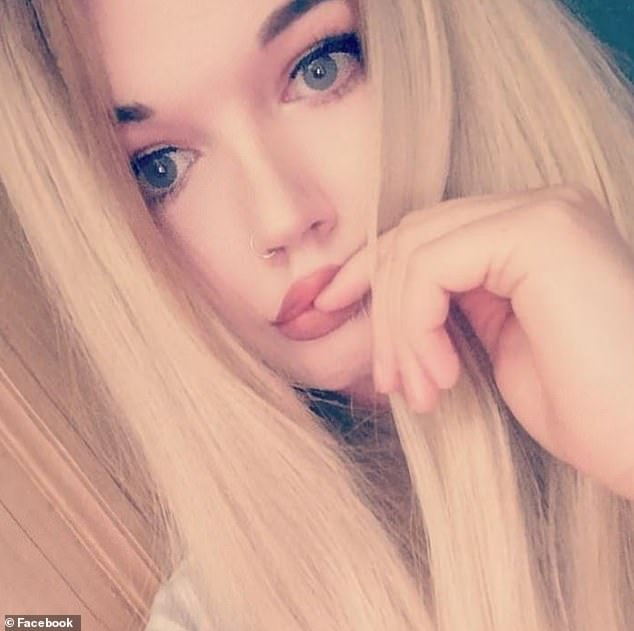 The list carries on to say: ‘Your lips have gone down so you should think of getting more filler. I know you said you regretted it but filler would make you sexier.

‘You need so much more confidence, confidence is sexy!

‘The fact you take things slow makes you look like a prude.

‘I didn’t get a kiss which messed with my ego.

‘Be more sensitive to others (sic) feelings.’

As the torrent of hurtful comments continue he says: ‘We he had food I know you got a salad but having full fat coke is more calories you really don’t need.

‘You need to keep your past to a minimum. I don’t care about it and what you went through.

‘Get a sense of humour, you didn’t laugh at a single one of my jokes.

‘You just seemed a bit stuck up. Sort your personality out.’

He then brings up Ms Latham-Hawkesford’s offering to pay for dinner again and says: ‘You made me feel s*** when you offered to pay. It’s like you thought I didn’t have enough money after telling you how much is in my  account.

‘You didn’t compliment me once.’

Finally he ends the message by saying: ‘If you take these on board I might consider another date.

‘I will give you a month and get back in touch to see if this made a difference.

As he signs off, he lands one final insult by spelling her name wrong and says: ‘Good day to you Kimberly.’