I swan-t a better view! Tiny cygnet peers out from its mother’s feathers while hitching a ride across a lake in Shropshire

An adorable cygnet hitched a ride on its mother’s back tiring itself out during a swimming lesson.

Wildlife photographer Andrew Fusek Peters took the sweet pictures after spotting the swans venturing out at Walcot Lake in Shropshire on Saturday morning.

The young swan stayed on the adult swans back for five minutes as it swan across the lake before hopping off near the opposite bank. 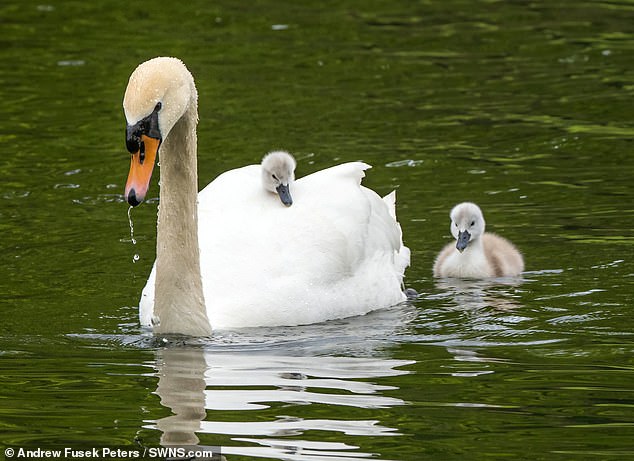 Mr Peters’s wife first spotted the young bird climb onto mother’s back and shouted to her husband.

The 54-year-old photographer, who has lived with his wife in the village for 25 years, said he had never seen babies riding on their mothers before.

He said: ‘When the cygnets are tired they climb on their mother’s back but it is rare and not often photographed.

‘The other one didn’t climb on so maybe it wasn’t so tired, I don’t know if it’s a bit stronger.

‘I like the balance, it is a nice photo really with one on her and the other just swimming along.

‘It’s just a lovely bit of parenting going on.’ 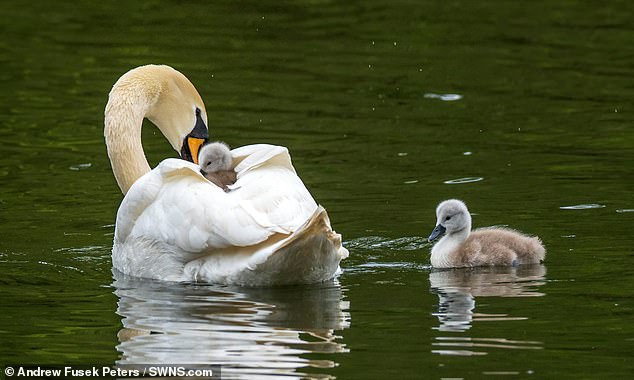 The 54-year-old photographer, who has lived with his wife in the village for 25 years, said he had never seen babies riding on their mothers before

Mr Peter’s said he was lucky to get to the lake in time as the cygnet only stayed on her back for five before getting off on the bank opposite.

‘The mother was doing a bit of feeding and in one of the pictures she dips her head down into the water,’ he added.

‘The baby stays on as she feeds on vegetation like weed.

‘It was really being in the right place at the right time. It was lucky we were slightly delayed at home and set out later.

‘It is a cute picture. It has got cute written all over it.’