Ben Barba’s NRL career appears all but over after the league’s boss said he ‘can’t see him ever returning’ after he was accused of domestic violence.

Todd Greenberg made the announcement of a possible life ban on Saturday afternoon after the Cowboys axed the former Dally M player of the year a day earlier.

Barba, no stranger to controversy, is facing serious allegations of domestic violence against his partner Ainslie Currie at a Townsville casino on Australia Day. 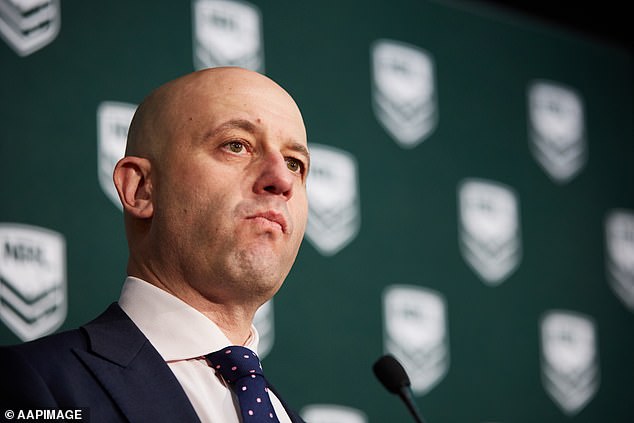 Police are investigating CCTV footage of the alleged altercation and have not laid any charges.

But Greenberg says there’s no way back into the league if the footage showed any indication of violence against his partner.

‘If you’re violent against a woman you can expect to be removed from the game,’ Greenberg told reporters in Sydney on Saturday, according to The Daily Telegraph.

‘It starts now. If (the footage) shows violence towards a woman there is no debate. Ben Barba will be out of the NRL immediately and I can’t see him ever returning.

‘If the evidence is there he won’t return under my watch.’

Greenberg concluded the press conference by saying the NRL off-season had been a ‘train wreck’, but was yet to actually see the CCTV footage for himself.

The potential of an impending life ban on Barba comes after a tumultuous career of the man once dubbed the golden boy of rugby league. 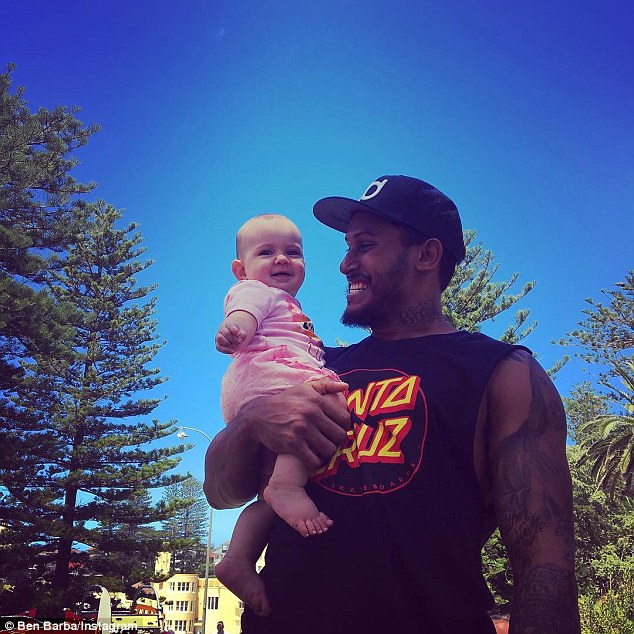 Barba was handed a 12 month contract for the 2019 season but has now been sacked. He is pictured with daughter Bobbi Barba 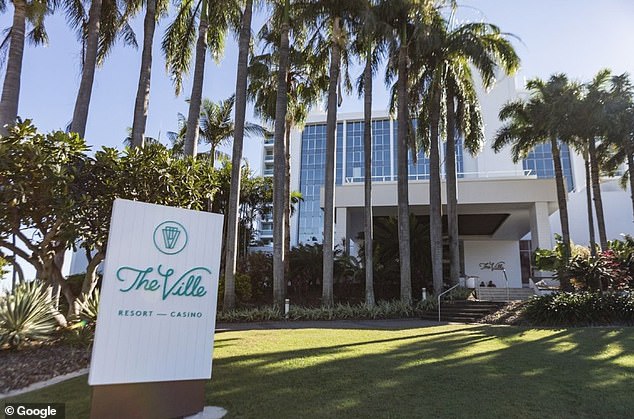 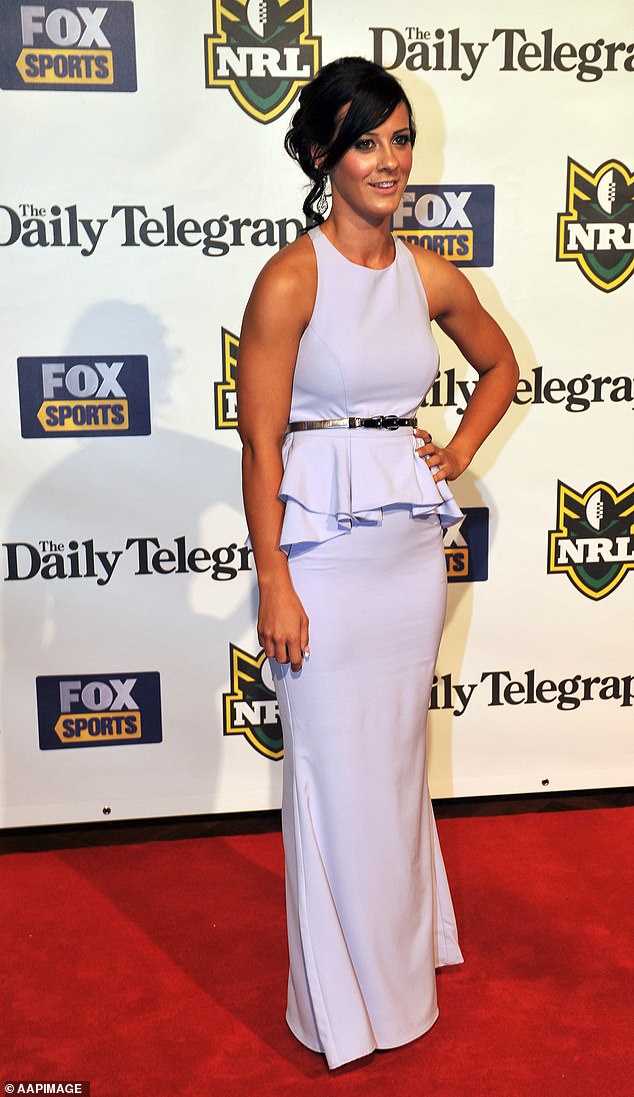 Ainslie Currie (pictured) is the mother of his four children, Bronte, Blaise, Bobbi and Bodhi

The fullback was first embroiled in controversy in 2009 when he got into a drunken car park brawl with Bulldogs teammates Lee te Maari and Jamal Idris at the Wentworthville Hotel in Sydney.

He was dropped to reserve grade for the majority of the season – but managed to get his career back on track and in 2012 he scored 22 tries to claim the Dally M Medal and take the Bulldogs to the grand final.

Greenberg was the Canterbury chief executive at the time.

Things quickly took a turn for the worse the following year when vicious rumours circulated on social media that he had assaulted Ainslie Currie, his partner and the mother of his four children.

But she strenuously denied the rumours and police never brought any allegations of wrongdoing.

Ms Currie said in a statement at the time: ‘I heard rumours floating around about my personal life and I have had family and friends ring to see if I am OK.’ 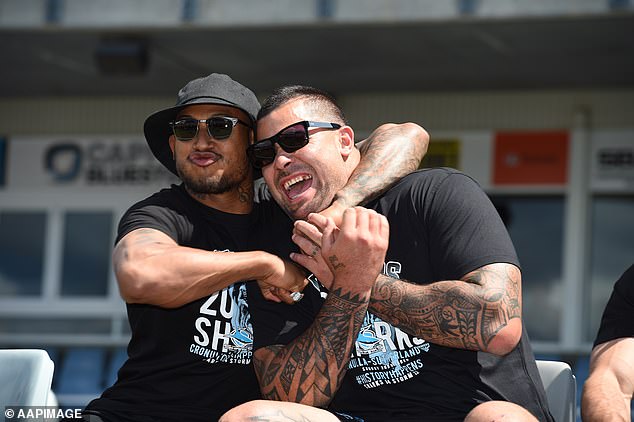 Ben Barba and Andrew Fifita were pictured at a fan day at Southern Cross Group Stadium, after they defeated the Melbourne Storm in the 2016 NRL Grand Final 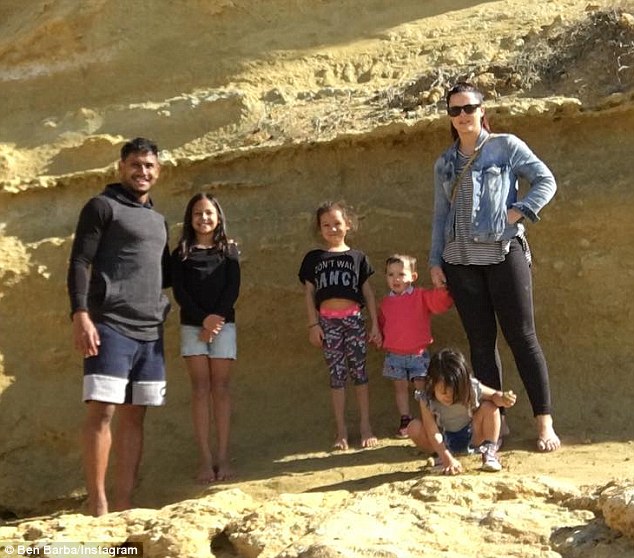 Barba was hoping this year would be his career revival, but an incident at a Townsville casino last weekend has led to its demise (pictured with his partner Ainslie Currie and their four daughters) 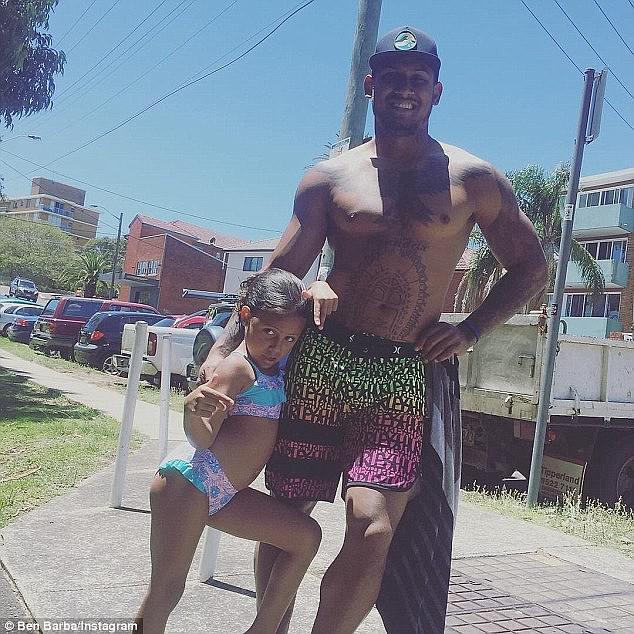 A TIMELINE OF BEN BARBA’S UPS AND DOWNS:

March 2009 – Gets into a drunken fight with Bulldogs teammates Jamal Idris and Lee Te Maari in a Wentworthville hotel. Is dropped to reserve grade for the majority of the season.

2011 – Becomes Canterbury’s full-time fullback and signs a contract with the club which should keep him there until the end of 2015.

2012 – Scores 22 tries to claim the Dally M Medal and take the Bulldogs to the grand final. They lose to Melbourne but Barba becomes one of the most marketable players in the game.

February 2013 – Stood down by the Bulldogs, citing behavioural reasons. Enters rehabilitation for gambling and alcohol issues.

March 2013 – Returns to the field after missing just the opening three weeks of the season for personal reasons.

August 2013 – Released from the final two years of his contract with Canterbury to sign with Brisbane for the 2014 season on a two-year deal. The Broncos pay an undisclosed amount to the Bulldogs for the transfer.

September 2013 – Rumours circulate that Barba abused his partner. She denies it and Barba is never charged over the matter.

2014 – Debuts for the Broncos, but takes seven matches to score a try and is eventually shifted to five-eighth in an underwhelming season where he scores just eight tries in 25 games.

November 2014 – Is told to look elsewhere by incoming Brisbane coach Wayne Bennett. Signs with Cronulla on a three-year deal that will keep him at the club until the end of 2017.

2015 – Struggles to find his place in the Cronulla team. Comes off the bench in 13 of his 19 games, scoring just three tries.

March 2016 – Wins a battle to claim the Sharks No.1 jersey ahead of Jack Bird and Valentine Holmes.

October 2016 – Claims his first premiership with Cronulla after returning to near career-best form. Scores 16 tries in 27 games for the Sharks, including the opening four-pointer in their grand final win over Melbourne.

November 2016 – Released by Cronulla after reports emerge he has tested positive to cocaine four days after the grand final, and faces a 12-match ban. Heads to Thailand for rehabilitation.

May 2017 – Parts ways with Toulon after being told he was no longer needed the following season. Signs with Super League club St Helens on a two-year deal.

February 2019 – Sacked by North Queensland for a significant breach of contract before playing a game for the club.

‘For the record, I am OK. I am healthy but I am dealing with an enormous situation regarding my break-up, which is being played out in a public forum.

‘Ben has asked for privacy and I guess it’s my turn to let people know that I am fine.

‘I am not physically hurt but dealing with a very personal situation that involves my children and myself.’

In February that year, Barba was stood down by the Bulldogs, who cited behavioural reasons. He then entered rehabilitation for gambling and alcohol issues.

One month later he returned to the field after missing just the opening three weeks of the season for personal reasons.

Over the next couple of seasons, Barba managed to stay out of trouble and won the premiership with the Cronulla Sharks.

But in May that year Barba was put on welfare watch after a drinking binge ended with him drunkenly abusing a teammate before a nasty spat with Ms Currie, who was then heavily pregnant with their fourth child.

The Cronulla Sharks sent Barba to stay with his parents in Mackay, east Queensland, to recover from the incident which began with him arguing with team mate Sosaia Feki over a game of cards.

Although the club denied there was a physical altercation, Sharks forward Wade Graham had to escort Barba home from the Cronulla Hotel ‘for his own protection’, it was reported.

When he returned to his Cronulla house that night, Barba had a spat with Ms Currie who was due to give birth in less than a week.

Speaking about the incident, Cronulla Sharks’ CEO Lyall Gorman said: ‘He broke out on the grog that night and he doesn’t handle grog at all.

‘He had a row with his missus but we don’t believe that was physical.

‘We just felt the best place for him was home with his parents for a couple of days.

‘We have put a lot of work into him and he has been given a lot of welfare and support.’

In November 2016, Barba was released by the Sharks after he tested positive for cocaine following their epic grand-final win and faced a 12-match ban. He went to Thailand for rehabilitation.

When the star signed his 12 month contract with the Cowboys last year after two years in exile in England, he vowed to stay away from drugs with his focus being on getting his career back on track.

‘I won’t be touching the stuff. Definitely not,’ he said.

‘I know this is my last chance to make better choices than I have in the past.

‘It’s easy for someone to say you’ve learnt from it, but the truth is I got in trouble twice for the same offence. I had to grow up. I’ve had to be honest with myself about the choices I make both inside and outside of football.’

He said he had learned from his past and would look to improve on his future.

But on Friday it emerged that Barba was allegedly involved in an altercation with Ms Currie at the Ville Resort-Casino in Townsville over the Australia Day weekend.

Later that night, Barba’s contract was terminated due to a ‘significant breach of terms’.

In a statement chairman Laurence Lancini said: ‘When a player joins the North Queensland Cowboys he agrees to abide by the terms of the contract.

‘After an internal investigation, it has been determined that this player has acted in contradiction to both the terms and the spirit of that agreement. Accordingly, the club has terminated his contract and has informed the NRL’s Integrity Unit.’

Daily Mail Australia is not suggesting Barba is guilty of any crimes, only that serious allegations have been made against him. 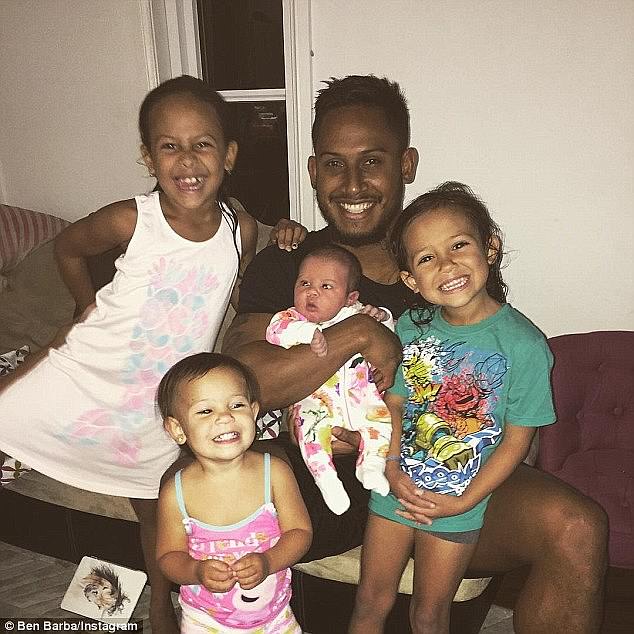 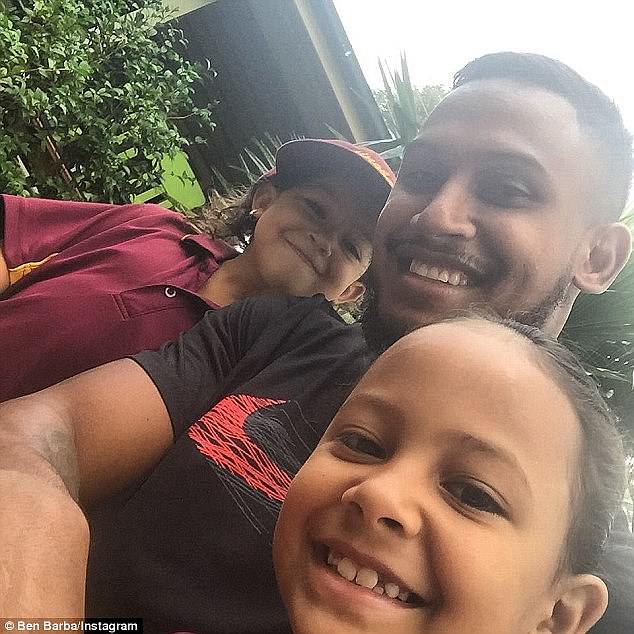 When the star signed his 12 month contract with the Cowboys this year, he vowed to stay away from drugs with his focus being on getting his career back on track 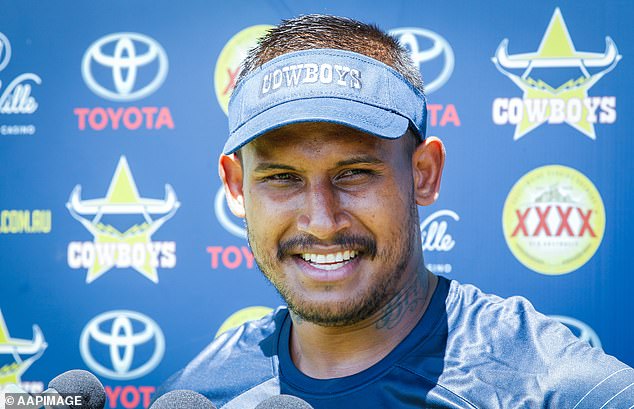 Veteran rugby league journalist Phil Rothfield said Barba should be forever blacklisted from rugby league after his latest incident, declaring the once explosive back will only be remembered for his ‘disgraceful’ behaviour

Today, North Queensland Cowboys terminated the playing contract of Ben Barba due to a significant breach of the terms of his contract.

Chairman Laurence Lancini stated: When a player joins the North Queensland Cowboys he agrees to abide by the terms of the contract.

After an internal investigation, it has been determined that this player has acted in contradiction to both the terms and the spirit of that agreement.

Accordingly, the club has terminated his contract and has informed the NRL’s Integrity Unit.