A toddler had both her legs amputated after her first birthday after she was born without bones in her shins.

Freya Gibbs, 18 months old, was diagnosed with tibial hemimelia, a rare lower limb defect believed to occur in one in a million births.

Parents Danielle, 27, and Michael Gibbs, of Llandysul, Carmarthenshire, Wales, didn’t know anything was wrong with their baby until she was born.

They were warned their daughter would never walk, with the lack of bone causing her legs to turn inwards.

Mr and Mrs Gibbs spent a long time pondering over the decision to have Freya’s legs amputated, concluding that a life of surgery was not worth it.

Freya had both legs removed below the knee in an operation, and her parents hope it means she will be able to adapt to prosthetic limbs at an early age.

Freya Gibbs, 18 months old, was diagnosed with rare tibial hemimelia, a lower limb deficiency that meant both of her legs were without bone. Pictured as a baby 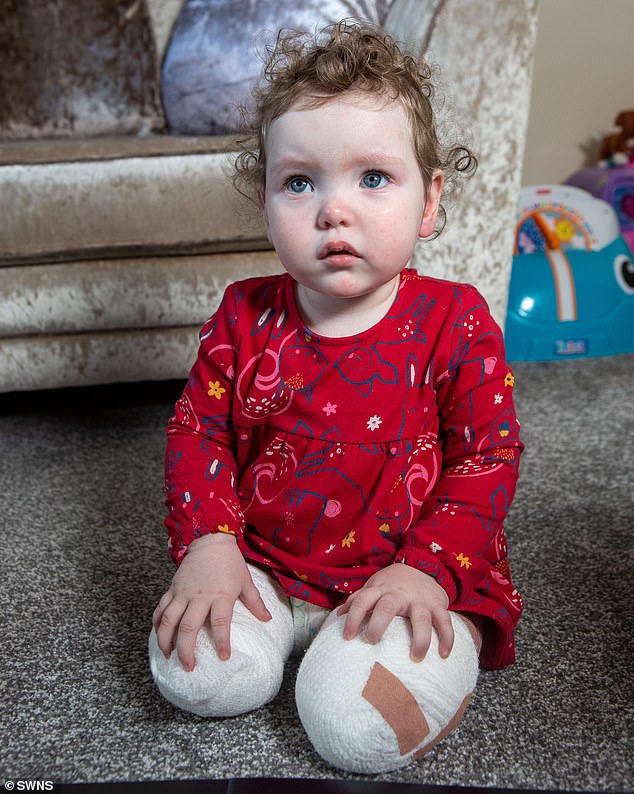 Parents Danielle, 27, and Michael Gibbs, of Llandysul, Carmarthenshire, Wales, decided amputation of Freya’s legs would be the best option. Pictured at her home recently 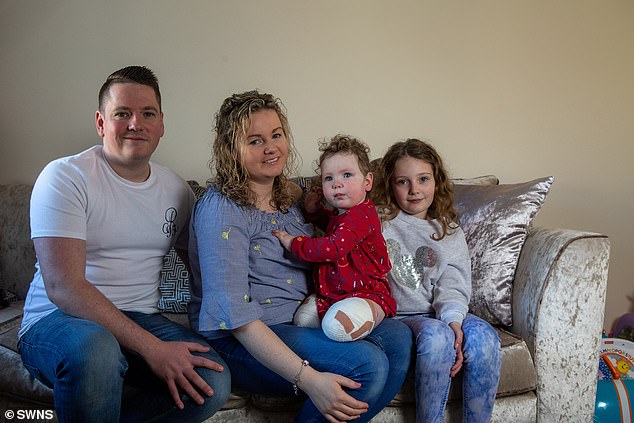 Mr and Mrs Gibbs, who also have a daughter called Olivia, pictured, didn’t know anything was wrong with Freya until she was born on September 7, 2017 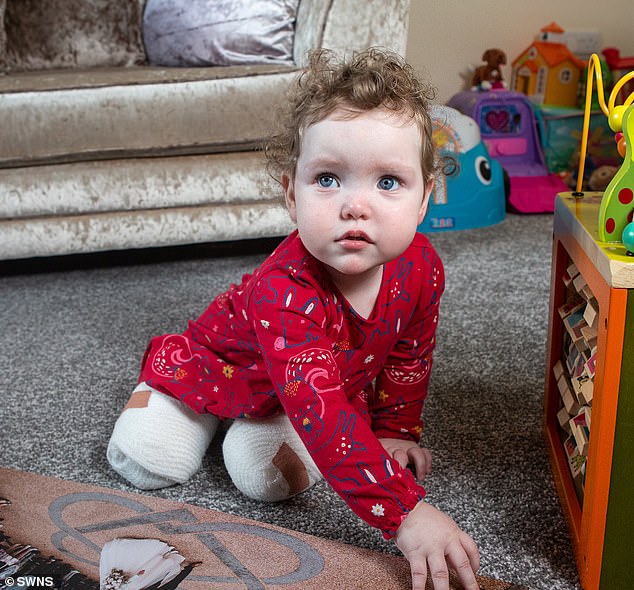 The family considered giving Freya operations that would need to be done in the US, but decided against it considering she may decide to have her legs amputated at a later date

Mrs Gibbs, a shop manager, said: ‘It was a hard decision to make, but we felt it was better to have both of Freya’s legs amputated and to let her get used to life without then from an early age.

‘We could have tried to spend the next 15 years having endless painful operations, but we didn’t want to put her through it only for them not to work or for her to decide she wants an amputation anyway.

‘This way she’ll never remember any different and we hope she’ll quickly adapt to life with prosthetic limbs.’

Doctors said she may have clubfoot but later they realised her legs were bowed and she couldn’t move them.

Mrs Gibbs, who is also mother to Olivia, said: ‘Her feet were in an awkward position, her knees didn’t move and her legs were in a fixed position.’ 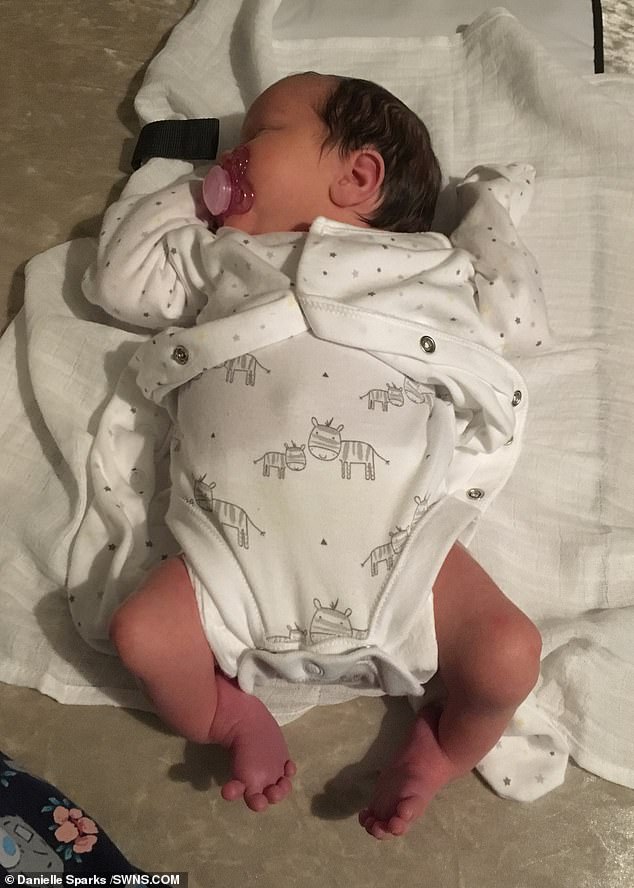 Doctors said Freya might have clubfoot but later realised her knees didn’t move and her legs were in a fixed position. Pictured shortly after birth 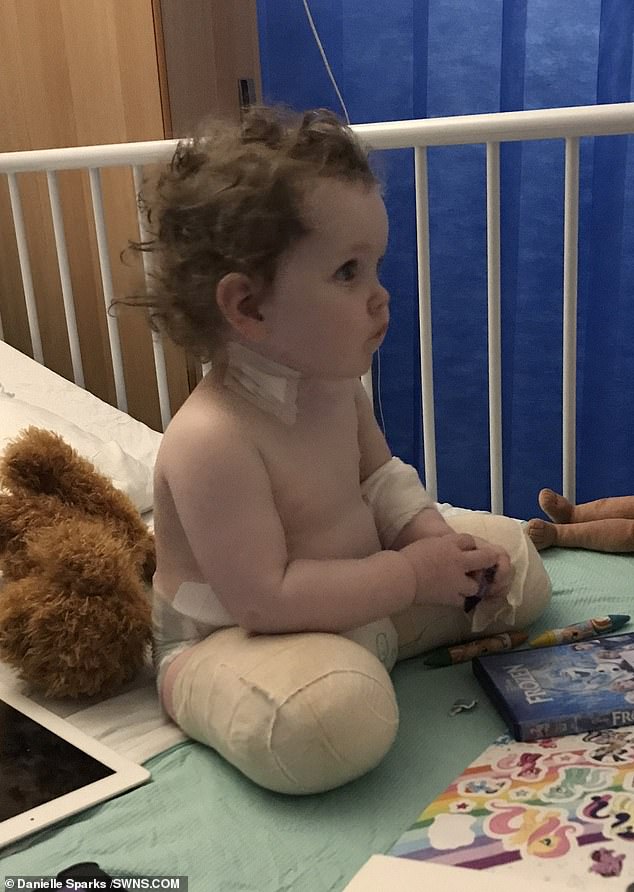 Freya had both her lower legs removed during a four hour operation at Cardiff Children’s Hospital on February 18. Pictured after 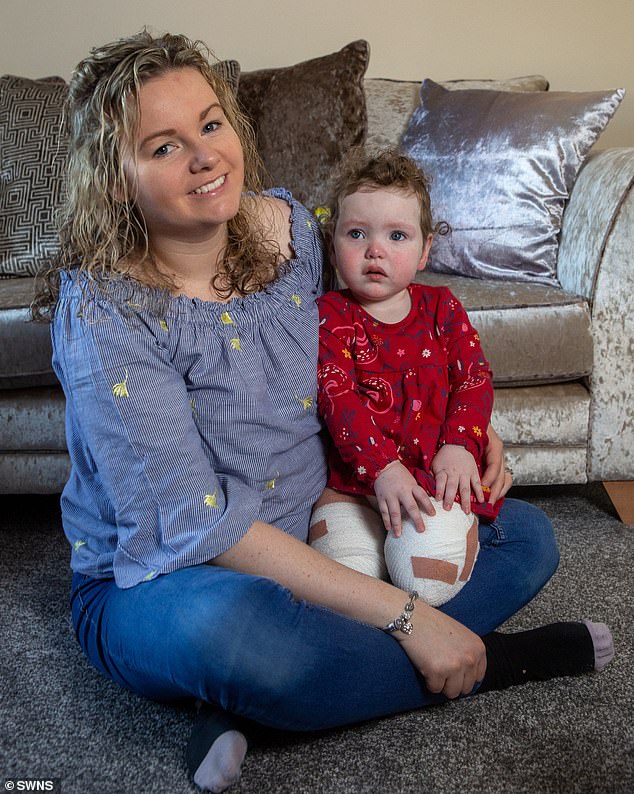 WHAT IS TIBIAL HEMIMELIA?

Tibial hemimelia, is a deformity, partial or total absence of the tibia, the thicker of the two bones in the lower leg.

It is the rarest form of leg bone growth, occurring in only one out of one million live births, according to orthopeadic surgeons such as Paley Orthopedic & Spine Institute.

The problems present at birth, but some experts say it can be seen during pregnancy scans.

It can affect one or two legs, affecting two (bilateral) in 30 per cent of cases.

Almost always, the leg is shortened and there are likely to be foot and ankle deformities and the foot may have additional toes. The knee may be twisted inwards and may be unstable or completely dislocated.

Instability is also due to an absence of muscles or ligaments attaching the tibia to the femur.

Treatments, depending on individual cases, include limb-lengthening procedures to gradually length the affected bone over time. In severe cases, limb amputation and the use of a prosthetic limb may be the best option.

Two weeks later she was diagnosed with bilateral tibial hemimelia. Bilateral means it happens in both legs.

Further tests revealed she also had a hole in her heart, however it is unclear why or what the defect was.

The family consulted specialists in Wales and the US about Freya’s legs and did consider using metal pins, secured by cages, to stabilise them.

But the family feared it would require 15 years of surgery, involving regular travel to the US. They also worried it still may not work, leaving her needing amputations in later life anyway.

Mrs Gibbs said: ‘We’d come across a surgeon in Florida and he was very into the saving of the leg – using metal pins and cages that go around the legs and he does quite a lot of surgeries doing that.

‘We did look into it, but because Freya has no bone there at all in one leg and just a tiny bit in the other, it would have meant 15 years of painful surgeries.

‘We’d have had to travel over to America each time for them and it might not work so the end result could be amputation anyway. There was no guarantees it would even work.

‘It’s in the early stages. The children who have had the surgery aren’t yet adults so you don’t know how it’ll be when they’re adults.

‘We didn’t want to put her through that just for her at the age of 16 to turn around and say: “Do you know what? I want an amputation anyway”.’

Mr and Mrs Gibbs realised that if Freya had the amputations now, she wouldn’t know any different.

Mrs Gibbs said: ‘She’ll learn how to adapt to prosthetic legs and will have always done things that way. 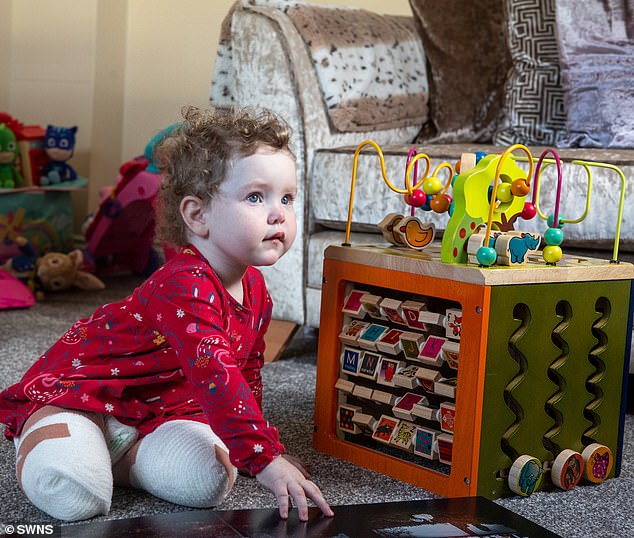 Mr and Mrs Gibbs realised that if Freya, pictured playing at home, had the amputations now, she wouldn’t know any different and would quickly adapt 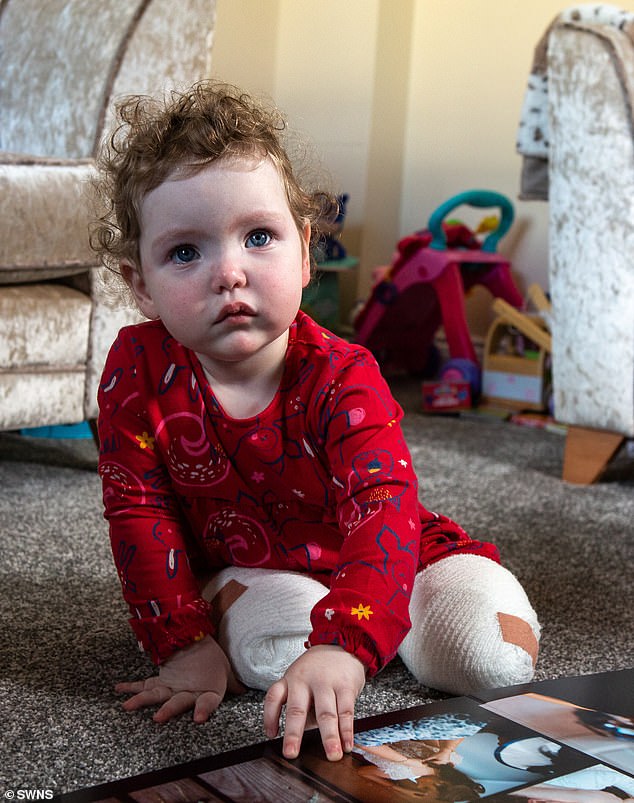 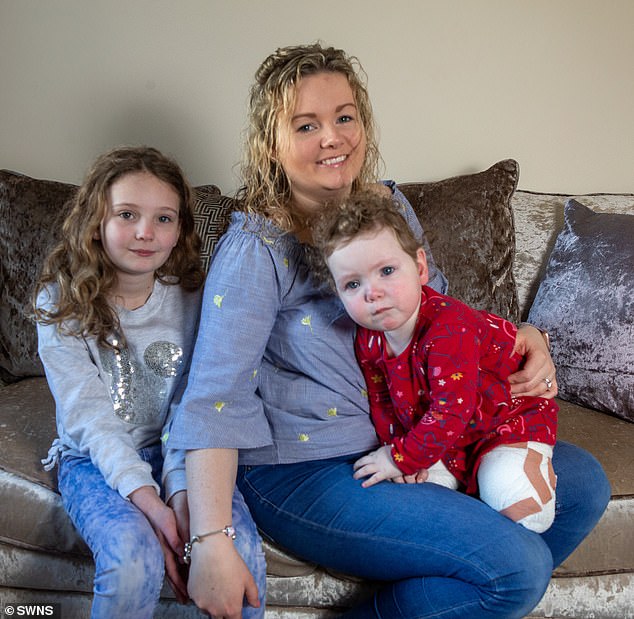 Mrs Gibbs said: ‘Once she’s up and about there’ll be no stopping her. Nothing’s going to hold her back now.’ Pictured, Mrs Gibbs with her two children

‘Kids bounce back. If they want to do something they’ll do it, rather than an adult struggling, the kids will get on with it.

‘We knew it needed to be done for her. Her legs were starting to hold her back. She really wanted to walk and run about and play with other children.

‘They’re all running around and she’s trying to keep up, crawling, we wanted her to be able to run around with them.’

Freya had both her lower legs removed during a four hour operation at Cardiff Children’s Hospital on February 18.

She was in and out of hospital on the same day, coming round from the anaesthetic very quickly and bouncing back to her normal self.

Mrs Gibbs said: ‘When she came back to the ward and we saw her, I just ran over and cried. I was so relieved.

‘She was already up and really alert. She just wanted to be picked up and cuddled straight away. She’s not upset or anything. She’s her usual chirpy self.’

The family said they will always remember Freya with legs.

Mrs Gibbs said: ‘Before her operation we took lots of pictures of her legs. We even had them cast in plaster cast – so we’ll always have her little legs.’

Now back at home, Freya has a follow up appointment to check the wounds are healing and four to six weeks after her op she will be fitted for prosthetic limbs.

Mrs Gibbs said: ‘Once she’s up and about there’ll be no stopping her. Nothing’s going to hold her back now.’