A luxury toilet paper brand has been accused of damaging protected forest land to make its products.

Essity is the company which makes quilted and triple layer Velvet toilet tissue, and koala-branded Cushelle.

But the wood pulp used to produce the premium toilet roll comes from protected forest land which is home to vulnerable species such as grey wolves and lynx.

Environmental group Greenpeace says the pulp made into toilet roll for British homes is supplied by logging companies which are devastating a region’s last remaining historic trees.

It comes from the Great Northern Forest in Sweden, which makes up almost a third of the remaining forest land left on Earth. Conservationists say the forest is vital for storing carbon produced by human pollution, while it is home to 1,300 threatened species including the lynx and Bechstein’s bat.

Jamie Woolley, Greenpeace UK forests campaigner, said: ‘Forest habitats are complex ecosystems and swapping old growth trees for new ones just isn’t good enough. If Essity really cared, it would leave the Great Northern Forest to flourish, rather than allowing it to be flushed down the toilet.’

The campaign group has criticised the toilet roll brand over its ‘three trees promise’ which guarantees it will plant three trees for every one used to make its toilet tissue.

Mr Wooley added: ‘Velvet’s clever marketing and “three trees promise” suggests the company cares about the environment and sustainability. But its owner, Essity, is sourcing pulp from the last remaining old growth Swedish forests, home to locally endangered species including wolves and lynx. It’s got to stop.’

A growing number of household products have faced recent criticism over their effect on the environment.

Following a Daily Mail campaign over plastic waste, cosmetics companies have removed microbeads from face washes, plastic from cotton buds and agreed to improve labelling on wet wipes which end up in the ocean when flushed.

Velvet and Cushelle toilet paper, which is advertised as being extra soft because of ‘micro air pockets’, sell to millions of households in Britain.

But a Greenpeace report reveals that the UK mill producing it is supplied with wood pulp from the Great Northern Forest –only three per cent of which is protected. 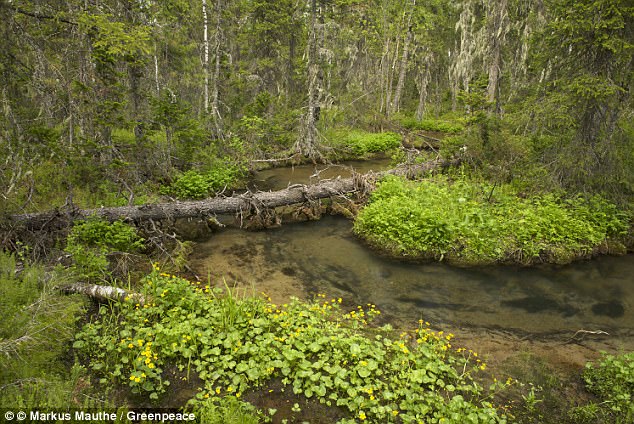 The Greenpeace report reveals that the UK mill producing the toilet tissue is supplied with wood pulp from the Great Northern Forest, pictured

Erika Bjureby, Greenpeace’s Great Northern Forest project leader, said: ‘The Great Northern Forest is being torn to pieces by logging companies to make disposable products. Essity is a world leader in the tissue production but it’s failing to show leadership in the urgent fight to save the world’s boreal forests from destruction. Essity must clean up its supply chain.’

Boreal forests are found only at northerly latitudes and tend to be cold and snowy. The Great Northern Forest stretches from Alaska and Canada to northern Scandinavia, across Finland, European Russia and Siberia to the Pacific Ocean.

It is the world’s largest terrestrial carbon store and contains 20,000 plant and animal species, including brown bears and wild boar.

In the Swedish forestry model, large areas are clear-cut, according to Greenpeace, which completely wipes out tree diversity. The trees planted to replace those lost tend to be a single species, which is worse for wildlife.

In a statement, Essity said: ‘Consumers must feel confident that all components of an Essity product and all fibre are derived through responsible forest management.

‘Discussions are currently ongoing with the Forest Stewardship Council to determine how Intact Forest Landscapes are to be included in the certification work. We fully support this work and look forward to the presentation of clear guidelines from the world’s most respected forest certification organization, the FSC.’

Greenpeace is calling on Essity to stop using wood from the Great Northern Forest.