BREAKING NEWS: The wait is over! Adam Peaty secures Team GB’s FIRST gold medal in Tokyo after swimming sensation becomes king of pool again to win the men’s 100m breaststroke and retain his title from Rio 2016

British swimming sensation Adam Peaty made Olympic history in Tokyo this morning by winning gold for the second time in the 100m breast stroke.

The 26-year-old from Uttoxeter cruised to victory to defend his Olympic crown and confirm his status as Britain’s undisputed king of the pool.

Fresh-faced Peaty, who had shaved off his beard just days before the event, was unable to beat his own world record of 56.88 seconds.

But he remains unbeaten over 100m at breast stroke for the last seven years – which include his gold medal at Rio 2016.

Looking exhausted but ecstatic as he got out of the pool Peaty bowed to the crowd to acknowledge his victory.

The Briton shouted ‘come on’ to his Team GB team-mates who had come Tokyo’s Acquatics Centre to cheer him on. 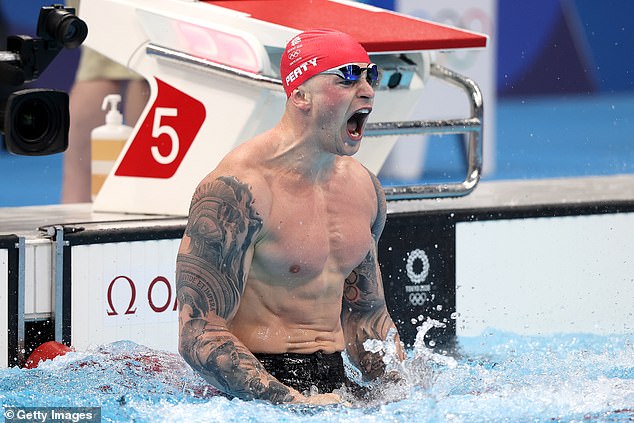 Peaty came home clear of the opposition but did not come close to breaking his own record, recording a time of 57.37 seconds.

His victory is Team GB’s first gold medal at Tokyo 2020.

Before the event new father Peaty told how he missed having his family and other supporters in the crowd and admitted Tokyo ‘does not feel like an Olympics’.

He said: ‘It’s very different out there.

‘It’s very strange because you think you can o me here and rely on that “oomph”.

‘But there’s not many people in the crowd because they’re all athletes, coaches and media, which is very different.’