Tunisia’s Ahmed Hafnaoui stuns rest of the field to win men’s 400m freestyle gold as 18-year-old – who was EIGHTH fastest in his heat – produced priceless reaction after winning by 0.16 seconds – having not realised he finished first!

Tunisian teenager Ahmed Hafnaoui caused a stir in the pool with a shock win in the 400 metres freestyle – insisting his incredible improvement was simply down to ‘hard work’.

The unheralded 18-year-old had a lifetime best of just 3min 49.9sec at the turn of the year and had only scraped into Sunday’s final eighth quickest.

However, Hafnaoui stunned the rest of the field from lane eight to take gold with a huge new personal best of 3:43.36 – a time which was also 2.32sec faster than his heat the night before. 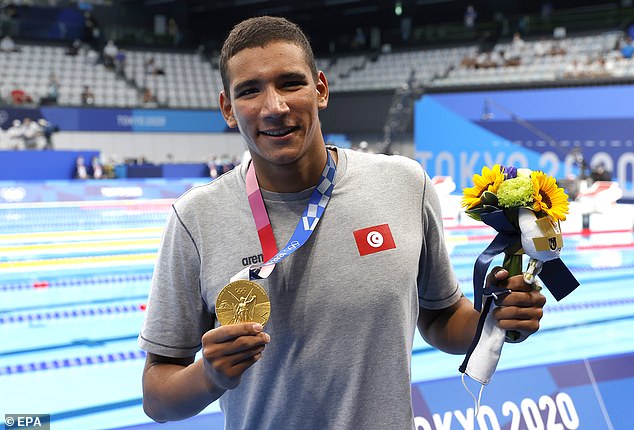 Hafnaoui celebrated wildly after discovering he had touched home in front of Australia’s Jack McLoughlin by 0.16sec, with American Kieran Smith in third.

And asked how he could explain such a remarkable rise from finishing eighth in the Youth Olympics three years ago, he replied: ‘I just worked hard with my coach, that’s it.’

Hafnaoui is only the second Tunisian to win an Olympic swimming medal after Oussama Mellouli, who served a doping ban before returning to win gold in the 1500m freestyle and 10km marathon at Beijing 2008. 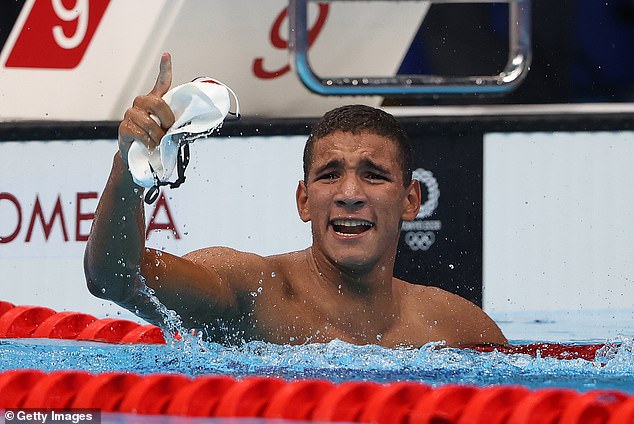 ‘I have a great relationship with him,’ admitted Hafnaoui about Mellouli, who is also competing in Tokyo in the marathon swim. ‘He is a legend. I wish to be like him one day.’

Hafnaoui said he had even shocked himself with his victory – and added: ‘Of course I surprised myself. It’s unbelievable. I didn’t believe it until I touched the wall and saw my face first.’

Magnanimous silver medallist McLoughlin said: ‘It’s the Olympic Games and anything can happen. Ahmed coming out and doing a huge PB is amazing and credit to him.’

There has been talk in swimming circles about how the pandemic has caused the amount of drug testing to be scaled back around the world.

But McLoughlin added: ‘Back at home we have had rigorous testing, just like normal. Since we have been here, we have had so many tests and the Japanese have done a really good job at drug testing everybody. So I don’t think there’s anything to say about it.’ 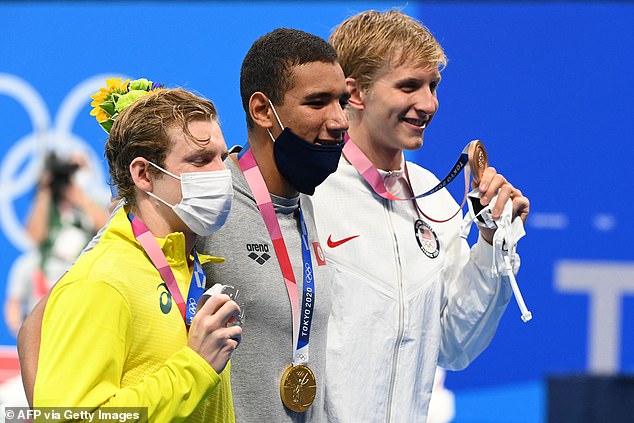