Brady, who was speaking at the Super Bowl Opening Night, said that even though he was disappointed by Alex Reimer’s comments about his five-year-old daughter, he hopes it doesn’t ruin his career.

‘I certainly hope the guy isn’t fired. I would hate for that to happen,’ he explained, according to USA Today Sports.

‘We all have careers and make mistakes,’ Brady continued, according to ESPN.

‘I’d hate for someone to have to change their life over something like that. That was certainly not what he intended.’

SCROLL DOWN FOR AUDIO 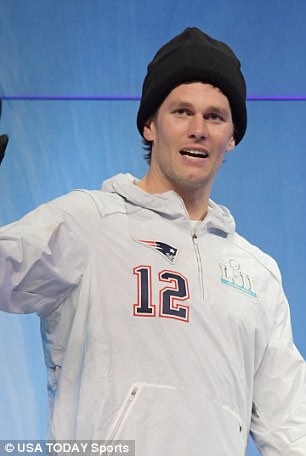 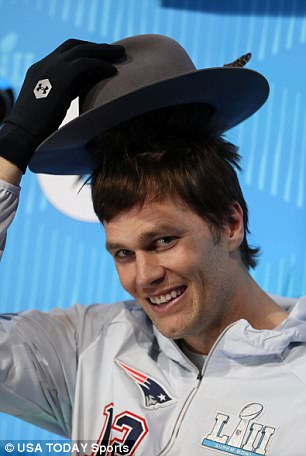 Brady, who was speaking at the Super Bowl Opening Night, said that even though he was disappointed by Alex Reimer’s comments about his five-year-old daughter, he hopes it doesn’t ruin his career 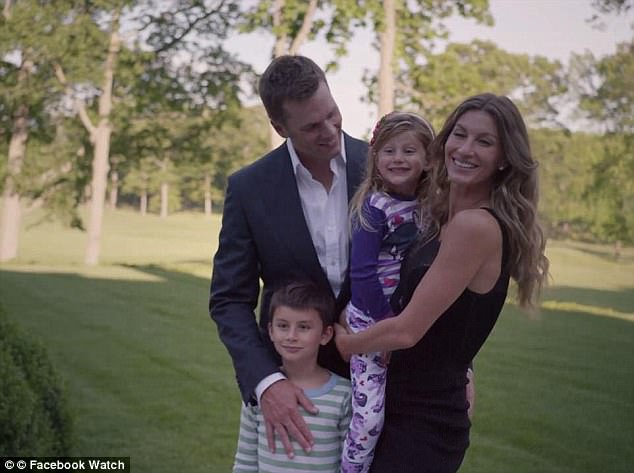 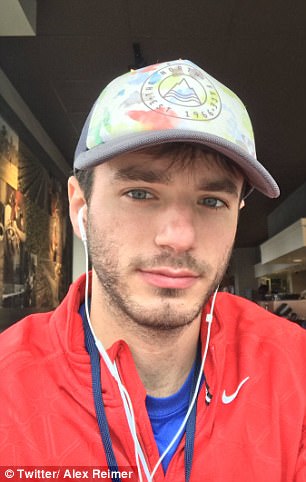 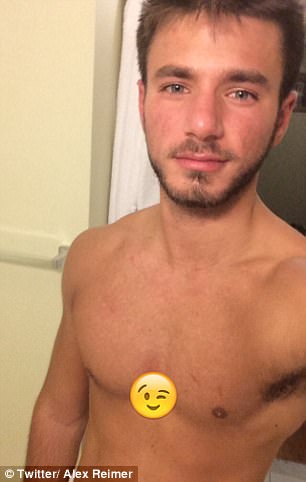 Alex Reimer (pictured in two selfies from his Twitter account) called Brady’s daughter ‘an annoying little pissant’ last week. He has since been suspended and sent home from Minnesota

‘It was very disappointing to hear that. My daughter or any child certainly does not deserve that,’ Brady told WEEI’s Kirk & Callahan before ending the interview. Reimer made the remark last week on a different show, referring to five-year-old Vivian’s brief cameo in Brady’s Facebook documentary series, ‘Tom vs. Time.’

He also said he would have to ‘evaluate’ if he would be coming on the station again.

‘We deeply regret what happened and offer our sincerest apologies to Tom Brady, his daughter and his family, as well as the New England Patriots organization,’ the statement reads.

‘Mr Brady has been a long time contributor to WEEI throughout his Patriots career, and he has treated us with the utmost professionalism and respect throughout the partnership.

‘We have communicated our course of action to the Patriots and Tom Brady, and they are in support of our disciplinary response.’

At the Opening Night Brady, who will be chasing his record sixth Super Bowl, also said that there were no underdogs in Sunday’s event.

While the Patriots remain the firm bookies’ favorites for a clash that sees Brady play in his eighth Super Bowl while Eagles opposite number Nick Foles plays in his first, the quarterback said he was paying no attention to the odds.

‘They’re good in all three phases,” Brady, 40, said of the Eagles, who like the Patriots are 15-3 this season. ‘There are no underdogs in the Super Bowl.’ 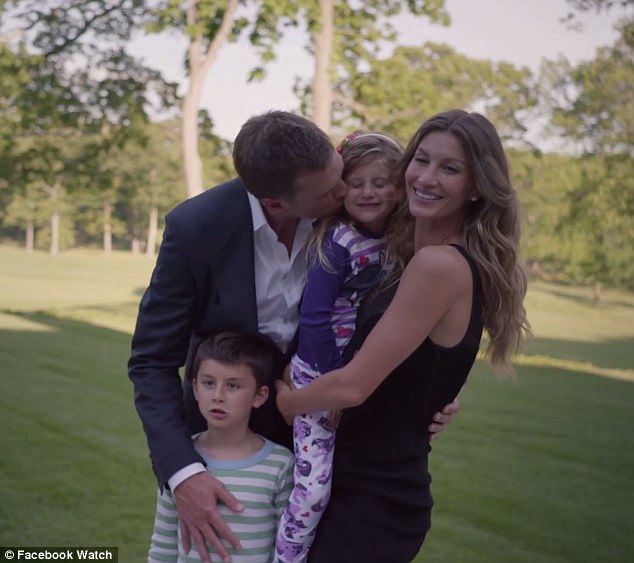 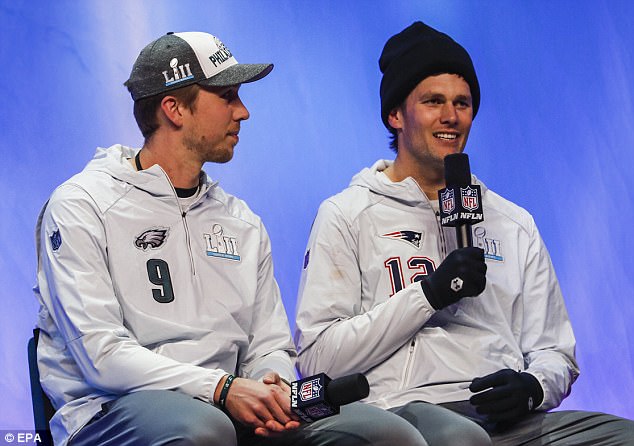 At the Opening Night Brady, who will be chasing his record sixth Super Bowl, also said that there were no underdogs in Sunday’s event. He is pictured with Eagles quarterback Nick Fols 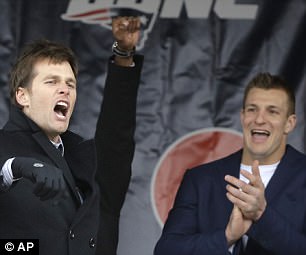 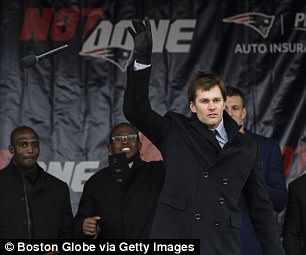 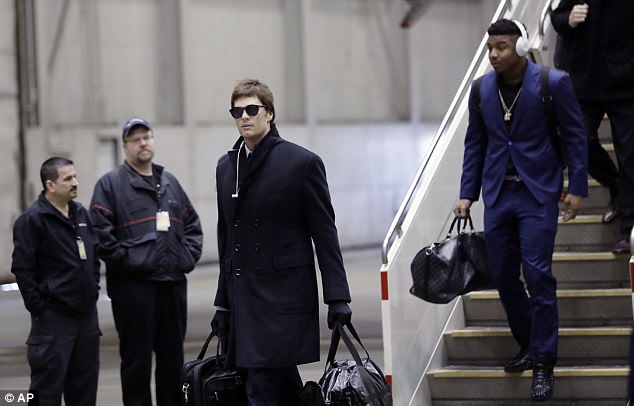 Tom Brady arrives with his Patriots teammates in Minneapolis on Monday

But Reimer did not stop there.

‘I thought the first scene was so staged, where Brady is in the kitchen, his kid is being an annoying little pissant…’

According to the station, Reimer has been suspended and was sent home from Minnesota, where the Patriots will face the Philadelphia Eagles in Sunday’s Super Bowl.

‘We are disappointed and embarrassed by Alex Reimer’s on-air comments made last Thursday evening. His remarks were utterly indefensible, and mean-spirited commentary directed in any way at children is wholly inappropriate. Mr Reimer remains suspended indefinitely from all WEEI platforms,’ a statement from the station read.

WHAT IS A PISSANT?

On Monday, Brady was so upset that he openly questioned whether he would continue with the weekly interviews on WEEI.

‘I’ve tried to come on this show for many years and showed you guys a lot of respect,’ Brady said. ‘I’ve always tried and come on and do a good job for you guys. It’s very disappointing when you hear [the comments about my daughter], certainly. My daughter, or any child, certainly don’t deserve that.

‘I really don’t have much to say this morning,’ he continued. ‘Maybe I’ll speak with you guys some other time,’ he said, before ending the interview.’

The first episode of ‘Tom vs. Time’ is about 15 minutes long and Brady’s daughter is not a major part of it. She’s mostly playing in the kitchen or having her picture taken.

The Facebook series offers an inside glimpse at the 40-year-old New England Patriots quarterback’s rigorous health routine as well as a healthy dose of his football clichés.

‘There’s a warrior toughness about me,’ Brady said at the top of the first episode, ‘The Physical Game.’

Brady is featured at home playing with his children, who pose with his five Super Bowl rings. 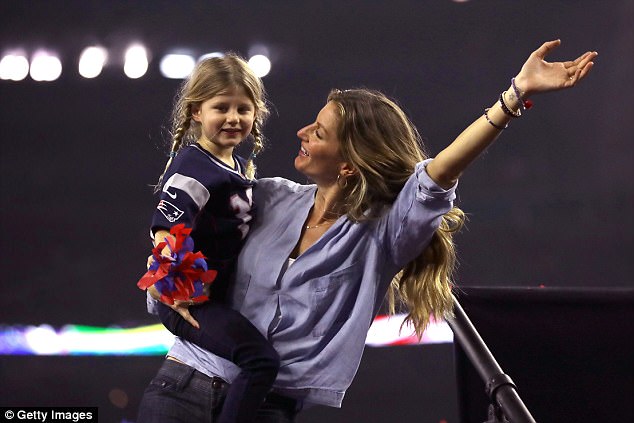 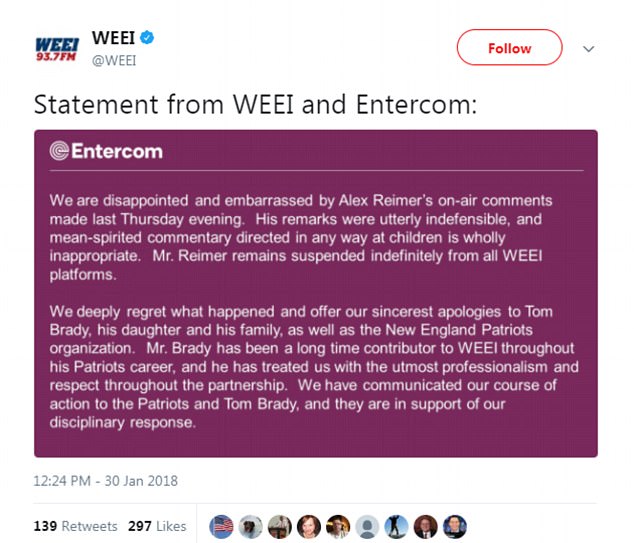 Brady also gets a bit of advice from supermodel wife Gisele Bundchen.

The two are shown driving home after an embarrassing early-season loss to Kansas City when Brady says to Bundchen that the Patriots were ‘so s*****’ on the field.

Bundchen disagreed and asked Brady to be patient with his new teammates.

‘You were not s*****,’ she said. ‘You were just not in sync yet. You don’t know each other. It’s like building a relationship. The first time you meet someone you’re not going to be their best friend.

‘It takes time to get to know people,’ she continued. ‘It’s going to be awesome. I know it. OK?’

Judging by the fact that Brady and the Patriots are back in the Super Bowl for the eighth time since 2001, it appears Bundchen was right.

Brady spends much of the episode subtly plugging his TB12 brand and offering up a variety of clichés aimed at explaining why he continues to be so successful at 40. 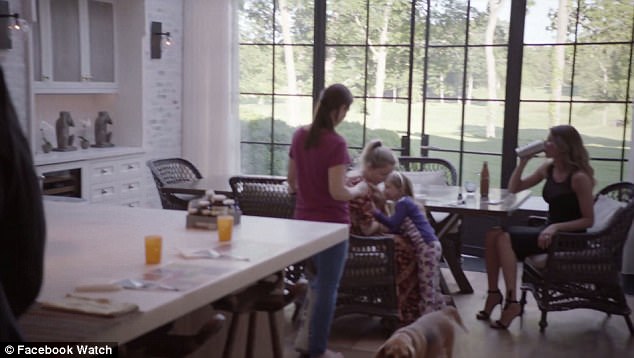 ‘What a handsome hubby,’ Bundchen said about Brady as he walked into their kitchen as his five-year-old daughter Vivian plays beside the breakfast table 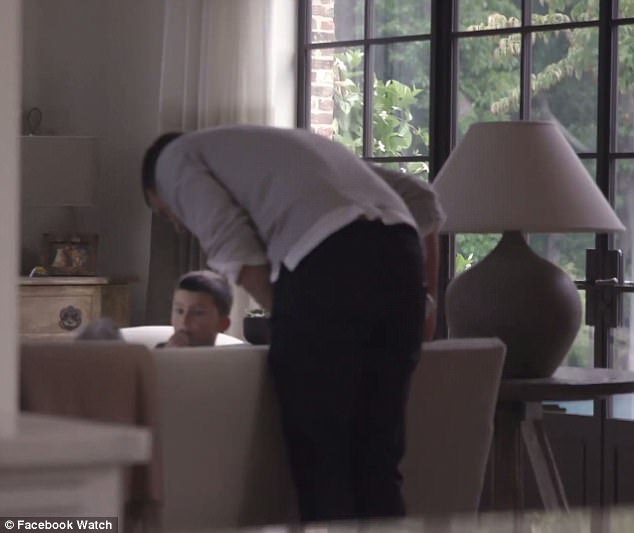 Brady is seen relaxing at home and interacting with his family, including son Benjamin

Entercom, the parent company of WEEI, recently announced an extension to its partnership agreement with the Patriots, according to ESPN. The deal includes the rights to ‘Patriots Monday,’ where Brady does his weekly interview.

Reimer is not a regular host on WEEI, instead performing a number of duties on various shows.

In May of 2017 he was featured in Boston Spirit magazine’s ‘local heroes’ section, where he discussed his career goals and coming out as gay on WEEI.

‘I do journalism, but my goal was always to entertain people,’ Reimer told the magazine. ‘I wanted to be in the middle of the debate. I’ve always liked my voice being out there and my opinion being heard.’

The magazine paints Reimer as a budding media talent.

‘In November, he also came out publicly on WEEI’s “Kirk & Callahan,” one of the coutnry’s most popular sports radio shows, where the 24-year-old Reimer is a clever, quipping and observant cohost,’ read the article.

‘Reimer, a past contributor to Boston Herald Radio, now brings an openly gay personality to a decidedly non-PC program in a format and genre still wanting for LGBT representation. And his particular interest – namely, the intersections between sports and culture – is rife for the exploration that only a smart, savvy, digital media prodigy can bring whether he does it as a jock, or a radio jockey.’

The magazine also asked Reimer who he thought Boston’s ‘hottest’ male athlete was.

‘I always like a jock-douchebag type, so [Jimmy] Garoppolo and Danny Amendola do it for me,’ Reimer said, referring to Brady’s former backup quarterback and one of the Patriots’ top receivers, respectively. ‘Much more so than Brady. He seems a little too tender, a little too soft to the touch.’ 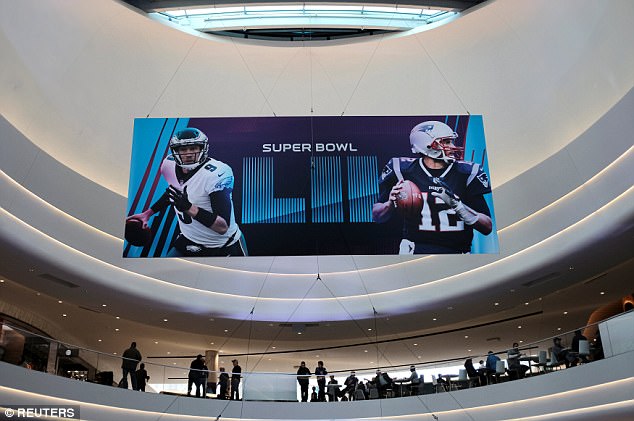 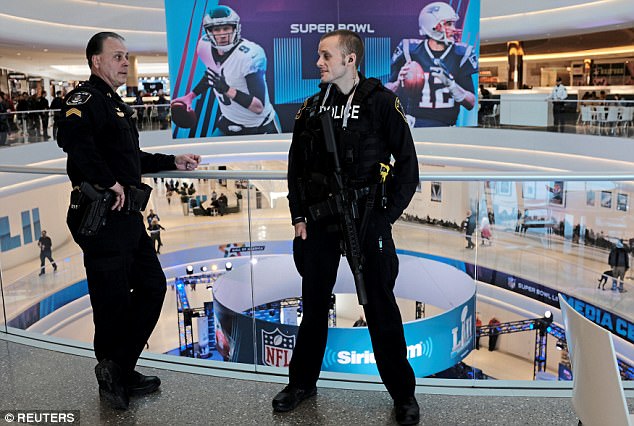