By Reuters and Alex Raskin Sports News Editor For Dailymail.com

Tom Brady and several members of the Tampa Bay Buccaneers continued to work out together on Tuesday despite the NFL Players Association’s warning against such gatherings as well as the fact that two teammates and an assistant coach have already tested positive for COVID-19. 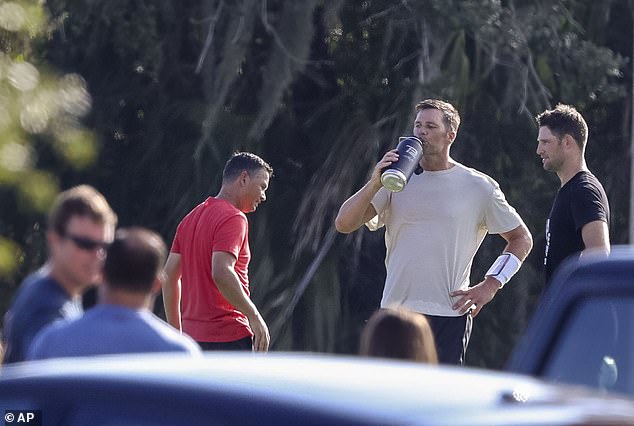 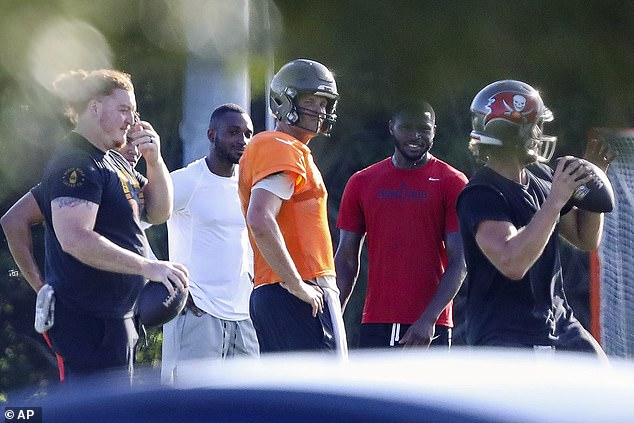 Brady, 42, and teammates have been working out regularly at Berkeley Preparatory School since mid-May.

In the wake of several NFL players across the league testing positive in recent weeks, NFLPA medical director Thom Mayer released a statement Saturday imploring all players to stop group practices amid the coronavirus pandemic.

‘Please be advised that it is our consensus medical opinion that in light of the increase in COVID-19 cases in certain states that no players should be engaged in practicing together in private workouts,’ Mayer wrote. ‘Our goal is to have all players and your families as healthy as possible in the coming months.

‘We are working on the best mitigation procedures at team facilities for both training camps and the upcoming season, and believe that it is in the best interest of all players that we advise against any voluntary joint practices before training camp commences.’ 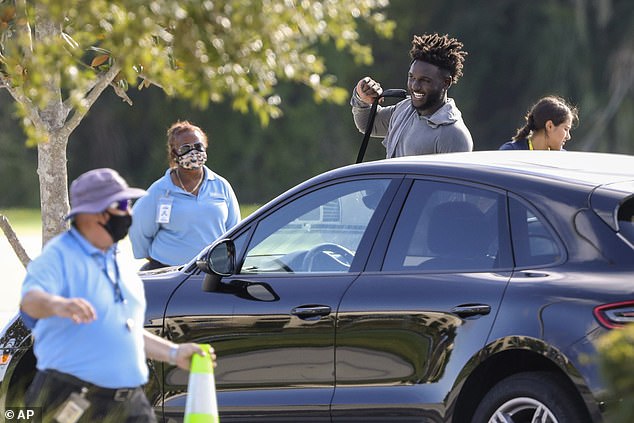 Coronavirus cases are rising rapidly in Florida, and reports last week said multiple members of the Bucs’ staff had tested positive. The team confirmed on Saturday that some staff have tested positive, though it did not offer a number.

The Bucs are scheduled to start training camp July 21. Head coach Bruce Arians has told reporters he hopes to have quarterbacks and rookie report by the 15th.

The NFL previously confirmed there will be no live minicamps this offseason. The league notified teams that the dates for virtual offseason work have been extended through June 26, but ‘there will be no in-person minicamps,’ per the report.

The decision was widely expected, considering the variance in social-distancing restrictions around the country during the coronavirus pandemic.

It means the first opportunity for coaches to work directly with players on the field will be at training camp, scheduled to begin July 28 for most other teams.

A league memo, obtained by DailyMail.com, instructed teams last week on the required steps before practice facilities can be fully re-opened.

It also stresses that the protocols cannot completely eliminate the risk of coronavirus infection.

Brady has been renting New York Yankees legend Derek Jeter’s Tampa home while preparing for his first NFL season outside of New England after inking a two-year, $50 million deal with the Bucs back in March.

His new replica jerseus are already among the most popular items on the league website. Fans can purchase Brady’s famous No. 12 for $99.99 or $149.99 for a limited model.

In May, Brady facilitated a two-hour workout with select teammates at a prep school in Tampa, in what was his first action since signing his contract. Gronkowski wasn’t there, but did attend Tuesday’s workout.