Tom Daley left little to the imagination as he posed in a pair of nude budgie smugglers while on holiday with his husband Dustin Lance Black in Greece.

The Olympic swimmer, 28, displayed his gym-honed physique as he posed for a mirror selfie in the couple’s hotel room.

The athlete sported a pair of sunglasses and captioned the post: ‘Holding on to summer!’

Holiday: Tom Daley left little to the imagination as he posed in a pair of nude budgie smugglers while on holiday with his husband Dustin Lance Black in Greece

His partner Dustin, 48, could be seen in the background of the snap, sporting a white vest top.

Dustin also shared a photo of the couple by the pool, with Tom seen working on his tan while relaxing on a deck chair.

Dustin recently revealed that he suffered a ‘serious head injury’ last month and is recovering – but said his ‘road back will be long.’

The film director posted a lengthy message to his Instagram on Monday, updating his followers on his condition. 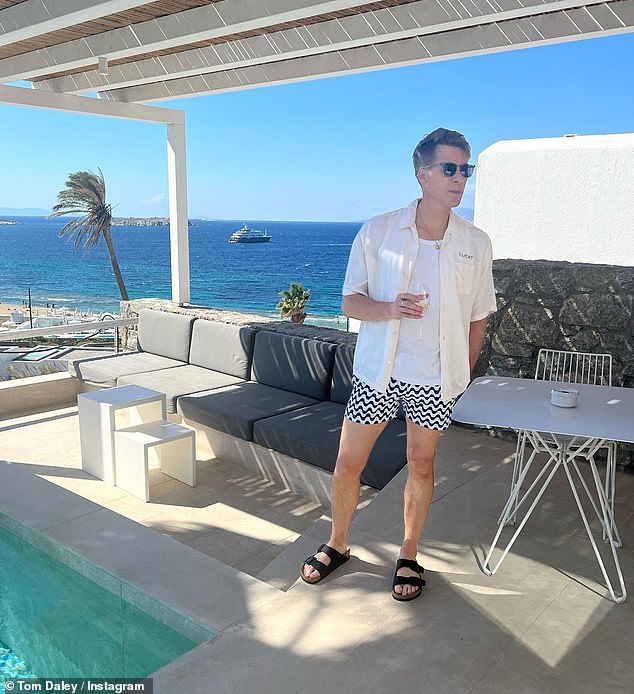 Recovering: Dustin recently revealed that he suffered a ‘serious head injury’ last month and is recovering – but said his ‘road back will be long’ 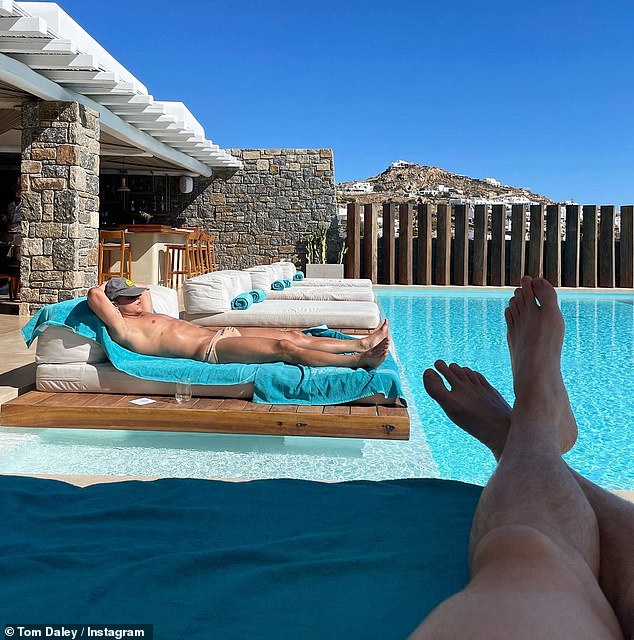 Fun in the sun: Dustin also shared a photo of the couple by the pool, with Tom seen working on his tan while relaxing on a deck chair

He began: ‘So I vanished for a while. A month ago I sustained a serious head injury that put me out of commission.

‘Showing little improvement, my doctors ordered me to shut off my brain in hopes of it healing,’ he wrote alongside a carousel of pictures from a recent Grecian vacation.

‘This has been a challenging, frightening time for a creative type who depends on what’s in his skull to work, care and love. And now I understand the road back will be long.’

Dustin added that Tom surprised him with an ‘over the top’ trip to Greece to help him relax after the ordeal.

He wrote: ‘This week my sweet, over the top husband took us to the Greek Islands to make me shut off.

‘I can already feel this trip is a step in the right direction, and I finally feel safe sharing a bit again. Thank you for all of your love and patience. More to come. Promise.’ 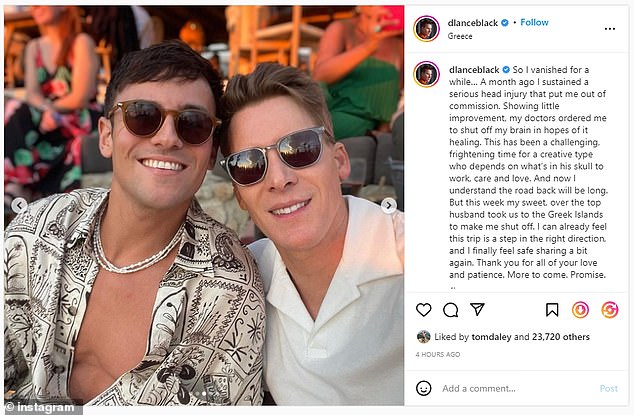 ‘I vanished for a while’: Black revealed his injury on his Instagram Monday as he shared photos from the couple’s vacation 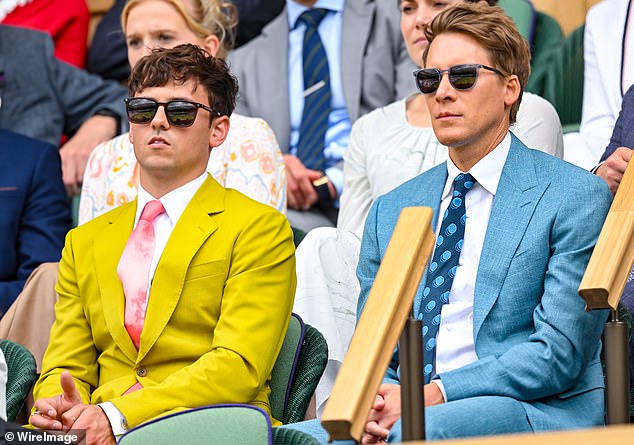 Dapper: The pair were most recently spotted together at Wimbledon in July and later accompanying Tom to investiture ceremonies at Windsor Castle

Black, the creator of FX’s recently released limited series Under the Banner of Heaven starring Andrew Garfield, has been married to Daley since 2017. The pair welcomed a son, Robbie, in 2018.

The couple were most recently spotted together at Wimbledon in July and later accompanying Daley to investiture ceremonies at Windsor Castle.

Last month, Black and Daley were involved in an incident at a London nightclub in which Black reportedly threw a drink at a woman, who allegedly responded by hitting him in the back of the head. 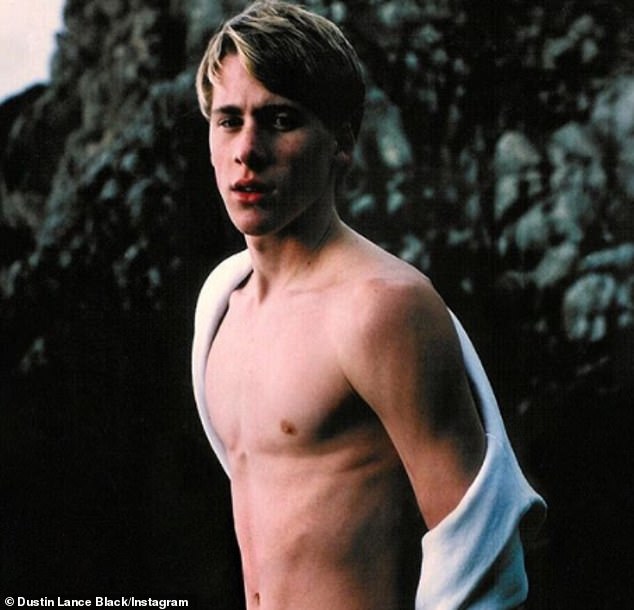 Incident: Black was recently involved in an incident at a British gay bar, during which he was allegedly punched in the head after pouring a drink on a club promoter

According to an account of the incident, Black threw a drink at an events promotor in the early hours of the morning at the gay bar Freedom in Soho, London.

Teddy Edwardes, 32, says Black dumped a drink on her head after she asked an individual at the venue to leave her table, at which Black and Daley were also seated.

Edwardes said after the incident, Black called the police and she had to ‘wait there for hours’ while Black stood outside the club ‘crying,’ saying it was ‘a targeted attack and that he’s traumatized.’

At the time, Edwardes tweeted that when she posted about the incident on her Instagram she received ‘so many messages from other women saying they’ve experienced the same with him.’ 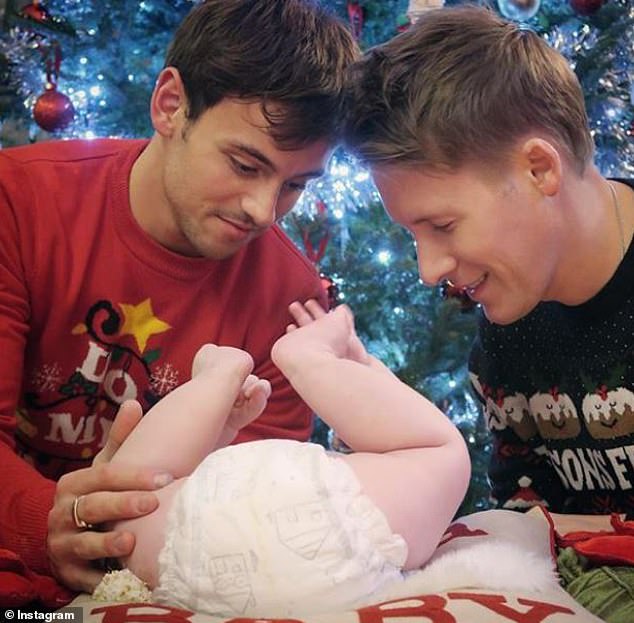 Family: The pair welcomed a son, Robbie, into the world in 2018

Representatives for Black and Daley did not respond to comment from the Daily Mail about the nature of Black’s injury.

In October, Black’s HBO documentary, Mama’s Boy, is set to open the NewFest LGBTQ+ film festival in New York. The film is about Black’s life.

Black also wrote and produced Rustin, a forthcoming fil about the life of gay civil rights activist Bayard Rustin. The film is expected in 2023. 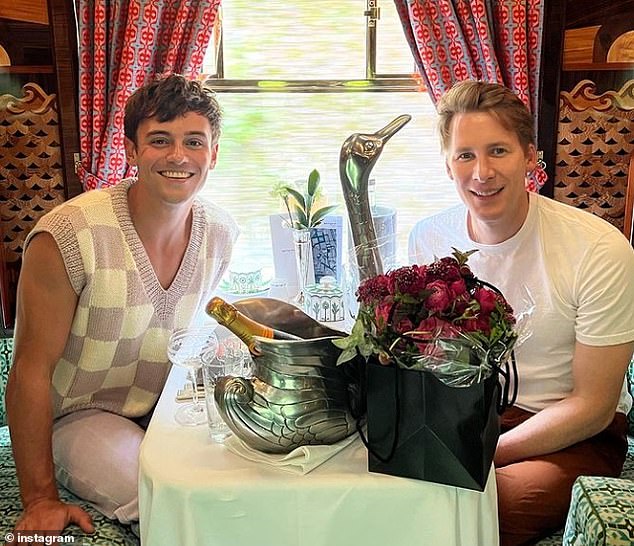 Relationship: The couple have been married since 2017