TOM UTLEY: From playing the sax to losing your virginity, phone boxes call us all back to our youth

Younger readers, brought up in the age of the mobile phone, may perhaps be baffled by this week’s extraordinary outpourings of affection for that increasingly unnecessary item of street furniture — the public telephone box.

Why, they may wonder, are campaigners up and down the country battling so fiercely to save these relics of a past age from the scrapheap? And why do so many of my generation (I’ll be 68 later this month) hold such a special place for them in our hearts?

All week, since the decision by the communications watchdog to protect some 5,000 of BT’s public phone boxes from closure, radio stations have been deluged with calls from listeners, recounting fond memories of the part these boxes have played in their lives.

A typical example was the story told by Geoff, who rang the BBC’s Today programme on Wednesday to tell how he had been banned from playing his saxophone in the flat when he stayed on the Isle of Wight 25 years ago.

The neighbours couldn’t stand the din, because it was a ‘big echoey place’ — and as he frankly admitted, he was new to the saxophone and ‘not making a very good noise’.

So one winter’s evening, he took his music and started practising in the telephone box opposite, where at least he had light and shelter.

‘Nobody seemed to bother me,’ he said. ‘Occasionally people went by and looked at me as if I was a bit mad.

‘A policeman stopped once and said, “I suppose it’s OK so long as you vacate the phone box if someone needs it” and passed on his way.’

But you don’t have to listen to phone-ins to hear stories of some of the unusual uses to which phone boxes have been put. And, no, I’m not thinking only of their once widespread use as places for prostitutes to advertise their phone numbers and (to judge by the smell) for antisocial tramps to relieve themselves.

Asking around among friends this week, I was surprised to learn from a fellow whom I have always regarded as the soul of respectability that one dark night, long ago, he lost his virginity in a phone box.

All week, since the decision by the communications watchdog to protect some 5,000 of BT’s public phone boxes from closure, radio stations have been deluged with calls from listeners, recounting fond memories of the part these boxes have played in their lives

I really wouldn’t recommend this to anyone. Not only does it sound madly uncomfortable to me, but I find it highly unlikely that any passing copper would be prepared to turn a blind eye.

Another friend tells me that when he was hitchhiking to Devon in his youth, the only dry place he could find to doss down for the night was a telephone box. That was until a passer-by found him slumped in his sleeping bag in that tiny, cramped space and took pity on him, allowing him to sleep on the floor in his lodgings.

As for my own experience of telephone boxes, they were a lifesaver during my childhood in rural Berkshire, when my parents’ decrepit car was forever breaking down. I would be despatched on foot to find a public phone from which to summon the AA. There was no more welcome sight, I can tell you, than that illuminated sign saying Telephone above the familiar red box.

Another fond memory from those days, which I share with many others of my generation, is of nipping into phone boxes to press button B, which returned users’ coins when they failed to get through to the number they called.

There was always an off chance that a previous user had forgotten to press it. If so, two old pennies would drop into my clutches — enough to buy eight chewy sweets, at a farthing each.

Later, as a cub reporter sent to cover a story, my first job was to locate the nearest phone box, from which to make a reverse-charge call to the copytakers, who would type out my words back at the office. This could be a long, drawn-out process, and I could only grimace my apologies to those scowling in the queue outside.

But the story that best sums up the central role telephone boxes used to play in the life of our communities was told by a friend who grew up in the rural outskirts of Greater London. She tells me that beside the phone box in her village was a bench, where she and her mates would meet after school.

All their mums knew the number of the box, which they would ring to summon their young home for their tea.

The nearest child to the phone would answer it with the word ‘Bench’, in the way that company switchboard operators answer calls with the name of their firm.

Fond memories, indeed. But of course all this was before the arrival of the mobile phone made those public kiosks all but redundant for most of us. These days, some 96 per cent of the UK adult population own a mobile. So, too, do nine in ten children under 11. Meanwhile, call volumes from payphones have plummeted from 800 million minutes in 2002 to only seven million in 2020. 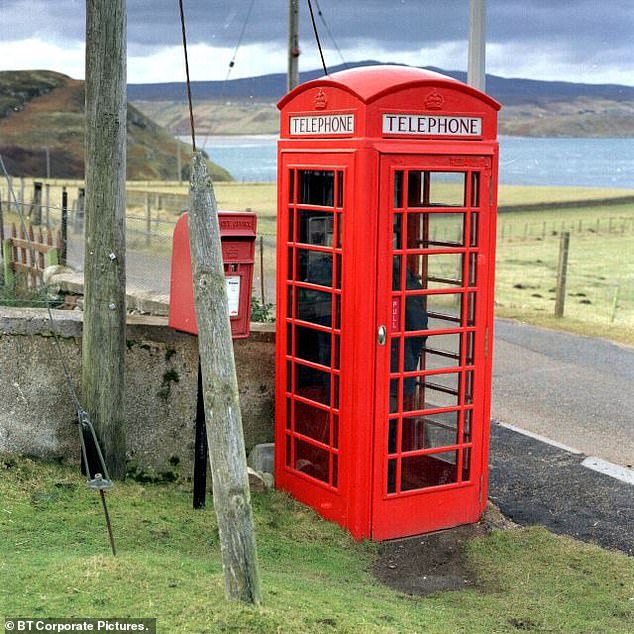 Younger readers, brought up in the age of the mobile phone, may perhaps be baffled by this week’s extraordinary outpourings of affection for that increasingly unnecessary item of street furniture — the public telephone box

Indeed, if you’re anything like me, you can hardly remember the last time you made a call from a public box.

No, the fact is that sentimental memories alone will not keep our beloved phone call boxes in operation.

Nor will the fact that they are aesthetically pleasing. (I’m thinking here of those which have evolved from the beloved K2 design drawn by the architect Sir Giles Gilbert Scott in the 1920s, whose successor the K6 is regularly voted one of the country’s top ten design icons, along with the Spitfire, the Mini and the London Underground map).

Nor can we comfort ourselves with the thought that this week’s ruling by Ofcom will save more than a few thousand of the 21,000 that remain.

Indeed, the watchdog’s ban on closures applies only to phone boxes in accident blackspots and areas with poor mobile coverage, greater than average use or high rates of suicide.

As Selina Chadha, the Ofcom director of connectivity, explains: ‘Some of the call boxes we plan to protect are used to make relatively low numbers of calls.

‘But if one of those calls is from a distressed child, an accident victim or someone contemplating suicide, that public phone line can be a lifeline at a time of great need.’

As for the rest of them, let’s face it, there is precious little hope that many will remain, as adornments to our streets, unless alternative uses can be found for them.

The good news is that on that front, there is much to encourage hope. Spurred on by BT’s offer to sell phone boxes to community organisations for as little as £1, if they put them to approved socially valuable use, enterprising folk have come up with all sorts of ingenious ideas.

Some of the old boxes have been pressed into service as cubicles for housing defibrillators, to revive victims of heart failure.

Others have found a new purpose as centres of exchange, where people can leave unwanted books, records or videos for the benefit of any locals who fancy them. Others have been used as showcases for conceptual art.

So let’s keep those ideas coming — and save as many of these icons as we can.

Just one word of warning: if I were you, I wouldn’t suggest using call boxes as love nests, dormitories for hikers or even as music practice rooms for aspiring saxophonists.

I have a feeling that few local planning authorities would approve.