Preppy fashion designer Tommy Hilfiger has had to slash the price of his Miami mansion which has been on the market for almost a year.

But no matter how warm and inviting the turquoise waters, it is the inside of the home that is the star of the show.

Fashion designer Tommy Hilfiger has put his beachfront Miami mansion up for sale with a $27.5million asking price 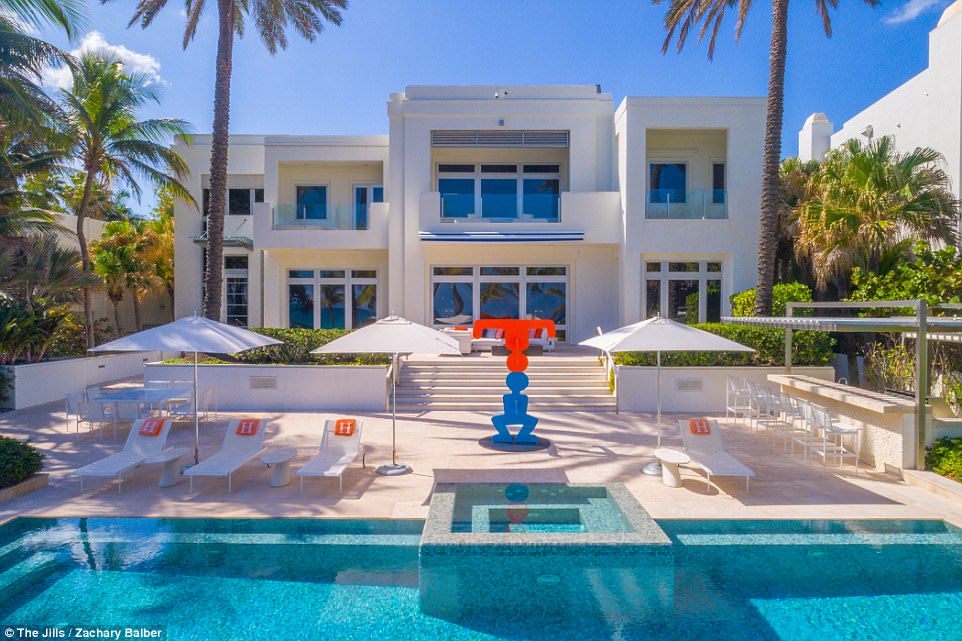 The home includes many pieces by modern and pop-art artists. The family even put a sculpture by Keith Haring next to the pool (above) 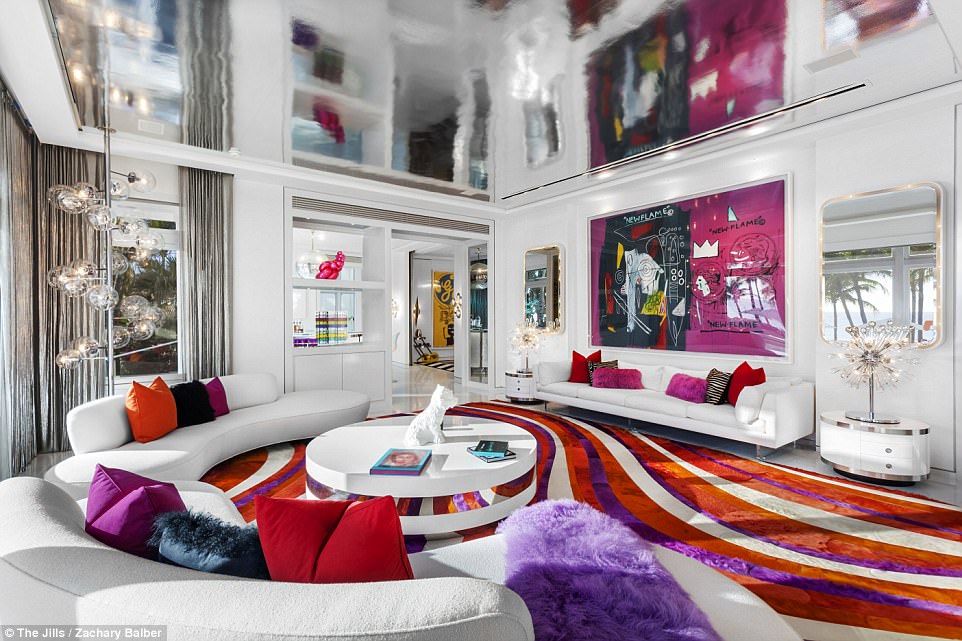 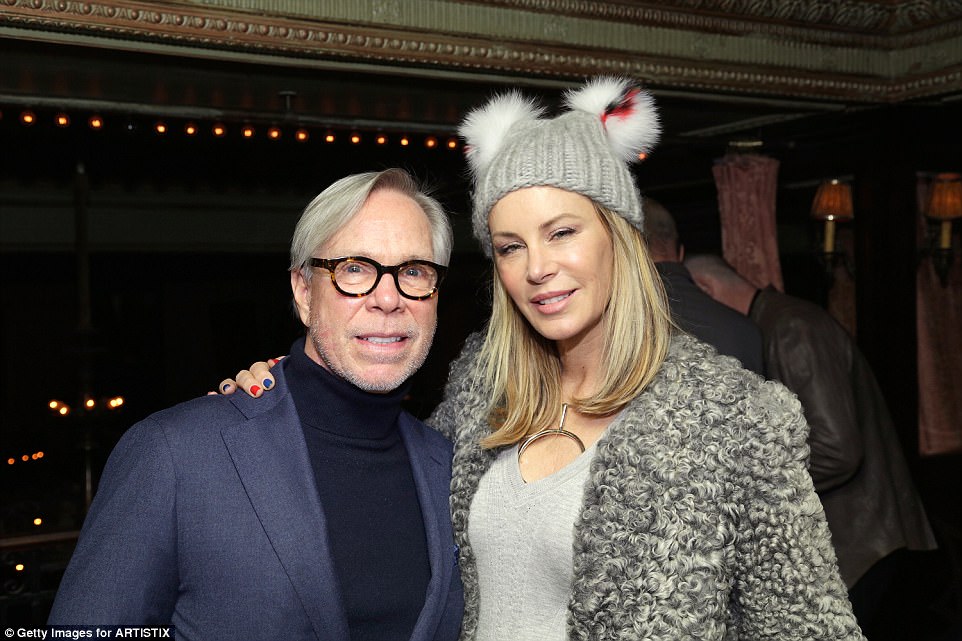 Hilfiger is pictured above with his wife at the Jane Hotel In New York City on February 11, 2017

Hilfiger and his wife, former model Dee Ocleppo, have turned the home into what amounts to a private art gallery with their collection of works by the likes of Damien Hirst, Keith Haring,Andy Warhol and Jean-Michel Basquiat displayed throughout the house (but of course, not included in the sale).

The couple paid a little over $17 million for the seven-bedroom oceanfront spread in 2013.

According to a 2014 cover story on the home in Architectural Digest, the couple chose their Miami home to showcases these pieces since they didn’t really fit in ‘conceptually or size-wise’ in their other homes in Connecticut and Mustique.

Hilfiger himself called the home ‘part art gallery and part beach house,’ according to the Wall Street Journal.

Outside, the home comes with an infinity pool and spa. The plot is surrounded by palm trees, patios and an eye-catching blue and orange Keith Haring sculpture. 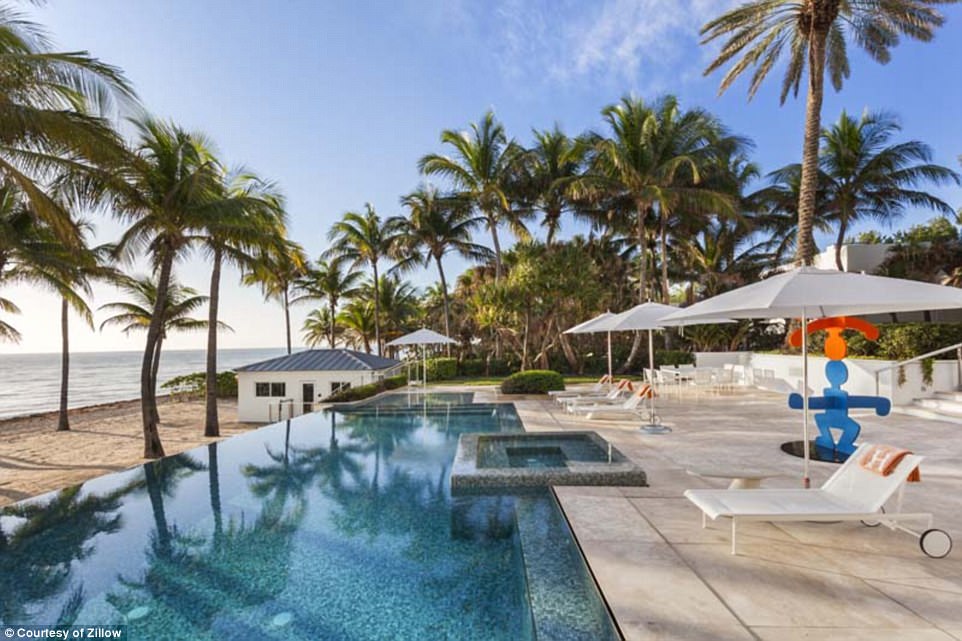 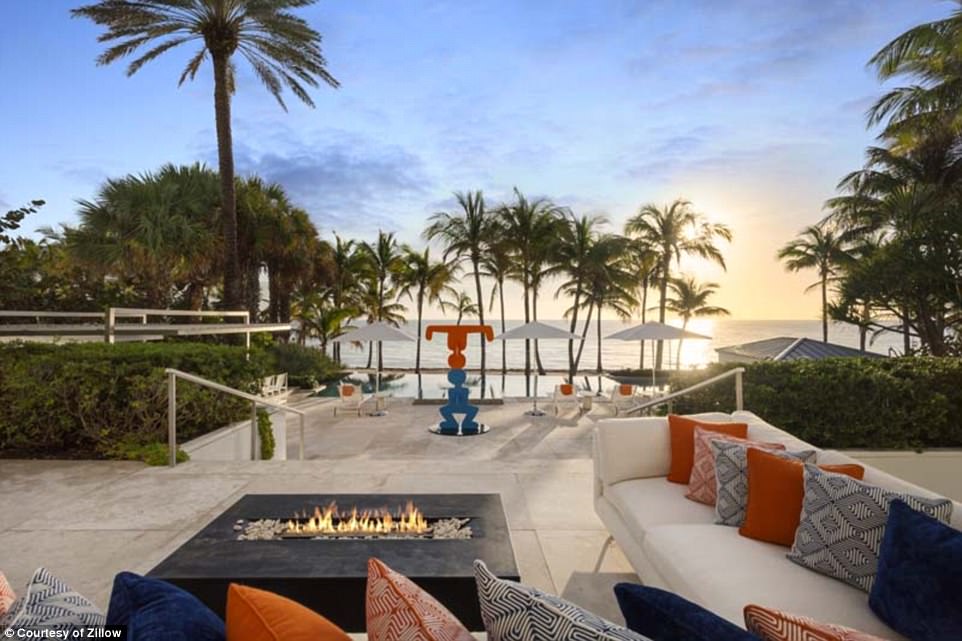 The Hilfigers and famed interior designer Martyn Lawrence Bullard were very committed to the home’s Pop-Art theme, from Keith Haring sculptures near the infinity pool to scratch-and-sniff fruit-flavored wallpaper 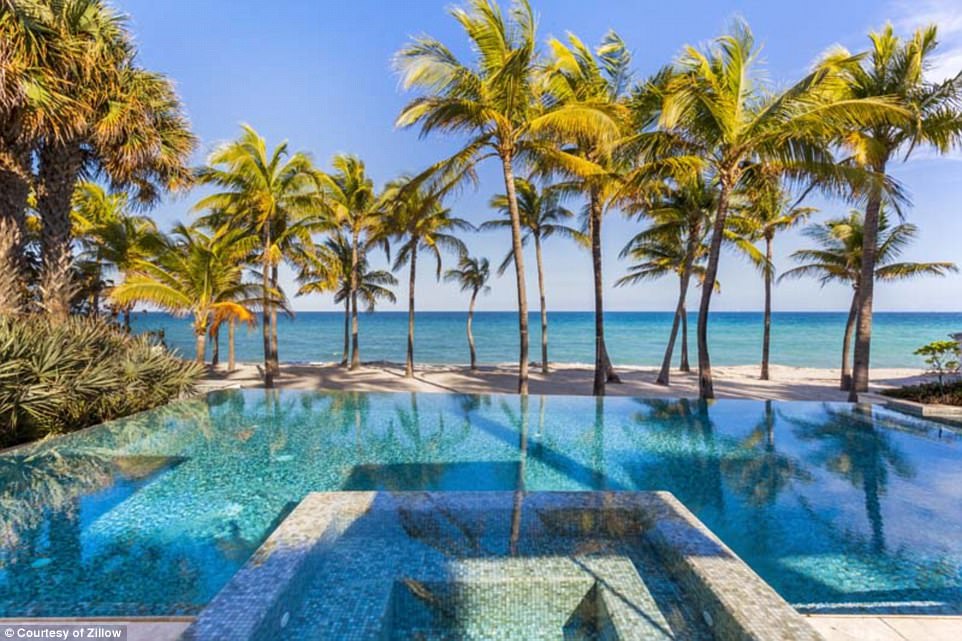 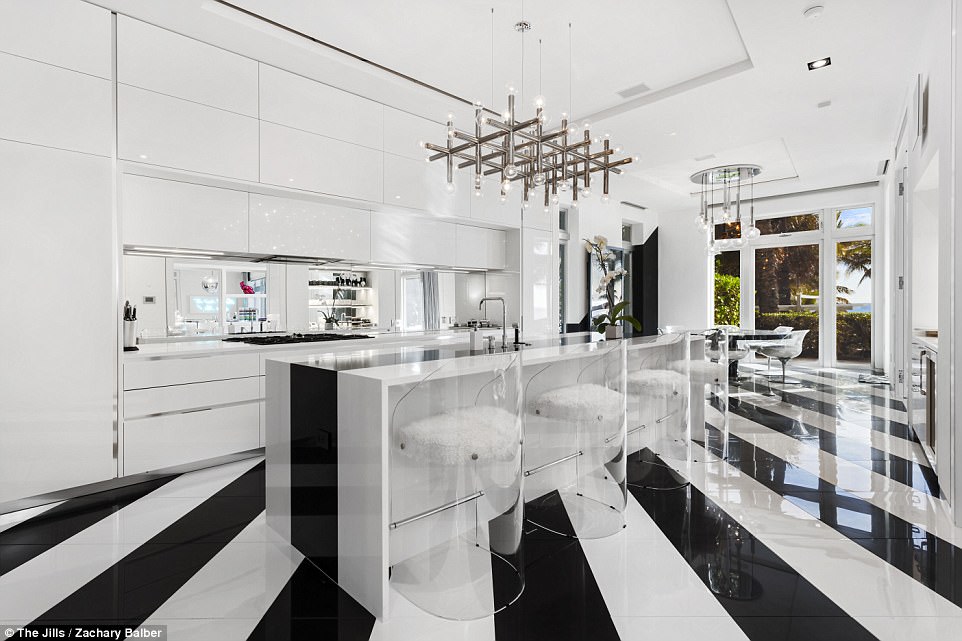 The estate includes seven bedrooms, 12 bathrooms and its own pool. It also backs up to the ocean, accessed by their own private beach

‘The Hilfigers had this estate designed to be a glamorous, sexy home where they could showcase their amazing collection of artwork, as well as incorporate a ‘groovy,’ colorful 1960s/1970s feel,’ co-listing agent Jill Hertzberg of The Jills team at Coldwell Banker Residential Real Estate, said.

‘This estate is truly a unique, spectacular find in Golden Beach, perfect for the luxury buyer who enjoys upscale, beachfront living.’

Hertzberg’s partner Jill Eber added: ‘Designed with vibrant colors and a Studio 54 style, the estate is a beachfront gem in exclusive Golden Beach. Having sold this home to the Hilfigers four years ago, we are elated to once again showcase it to prospective buyers.’ 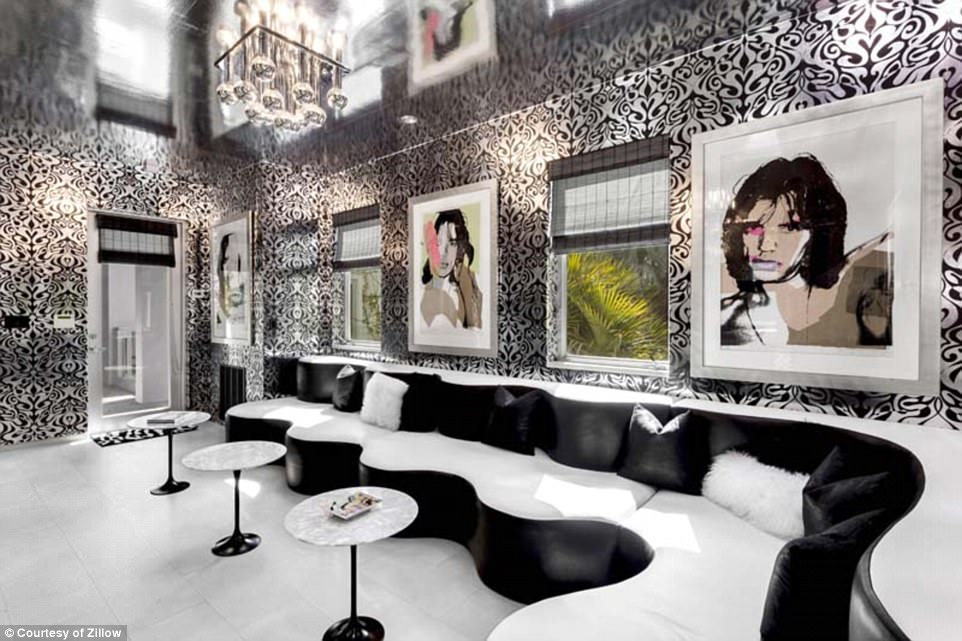 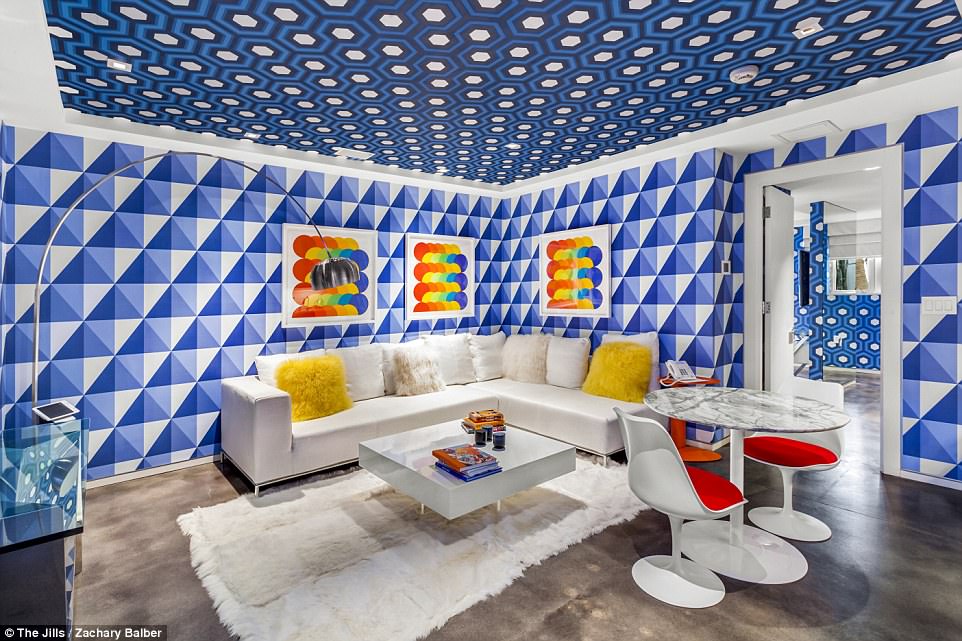 While the artwork and other furnishings are not included in the asking price, the couple is allegedly willing to part with some of their decor for an additional fee 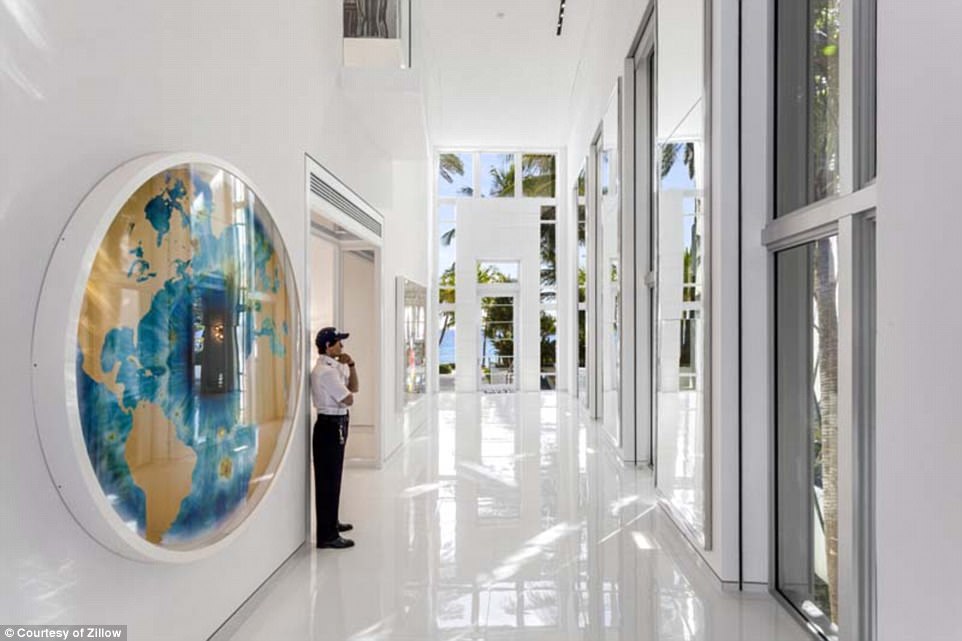 The house offers plenty of natural light and shimmering white floors. This is probably the most understated part of the house

Famed interior designer Martyn Lawrence Bullard decorated the home for the Hilfigers in the style of a 1960s or 1970s art gallery.

Mrs Hilfiger allegedly told Bullard during the design process, that ‘If it’s not shagadelic or groovy, it’s not coming into this house.’

While the home’s art is not included in the asking price, the Hilfigers have said they are willing to part with some of the pieces and furnishings for an additional fee.

Hilfiger’s office has been decked out in the namesake retailer’s recognizable blue, red and white colors.

Other quirky features include a 23-foot custom chandelier, a bar complete with a vintage style disco ball all the way from Monaco, a monochrome kitchen, a car that has been turned into a snooker table and a Mickey Mouse statue. 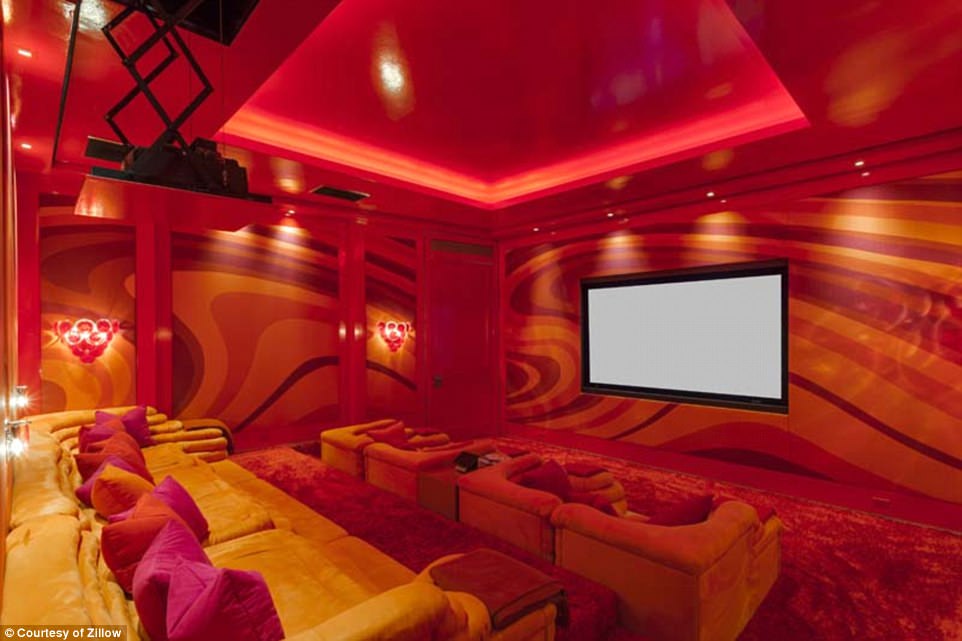 A psychedelic red movie theater is another of the garish rooms available for sale. Luckily the lights dim when you watch films 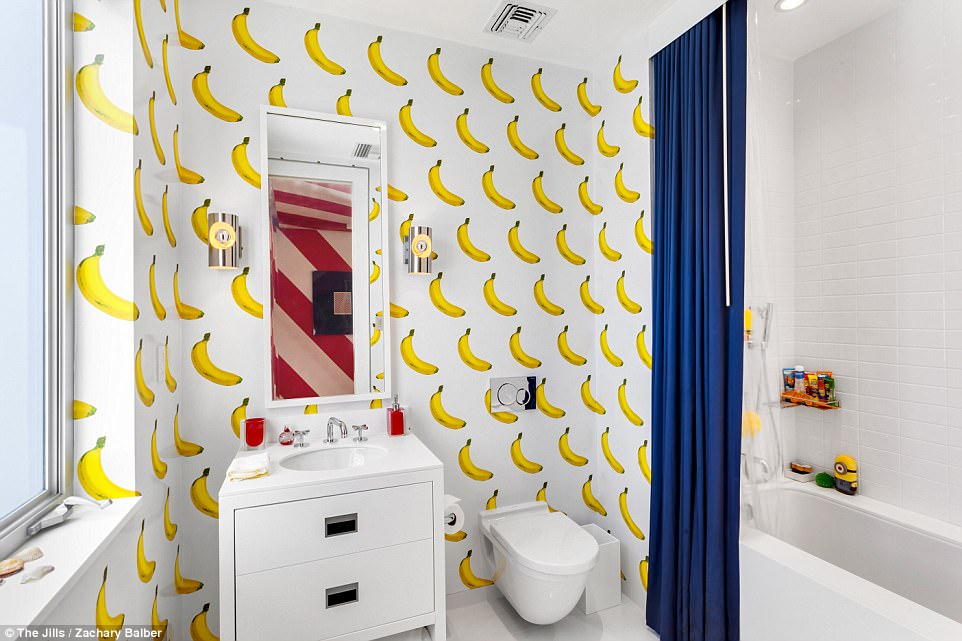 Some of the wallpaper in the kids’ rooms are scratch-and-sniff. Above, a kid’s bathroom with banana wallpaper

The home, which was built in 2007, is also especially kid friendly, with scratch-and-sniff fruit flavored wallpaper in some of the bedrooms. The Hilfigers have a son together and then another six from previous marriages.

The couple put the home up on the market last February, since they no longer spend much time in Golden Beach.

They have since upgraded to a $34 million sprawling Palm Beach mansion. The new Florida home boasts five bedrooms and more than 200 feet of ocean frontage, double the amount of the Golden Beach house.

If this home sells for its asking price, the listing agents say it will set a record for the area. The current record holder is a home that sold for $22.5million in 2014.

Hilfiger sold his namesake company to a private investment firm in 2005 but continues to act as the head designer for the brand.  He received a reported $1.6billion in the deal. 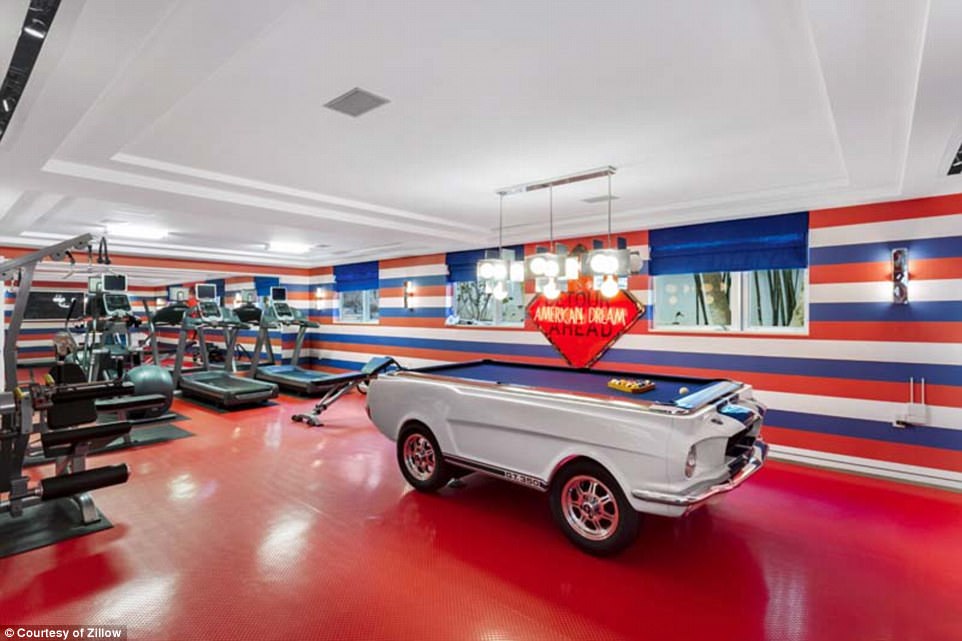 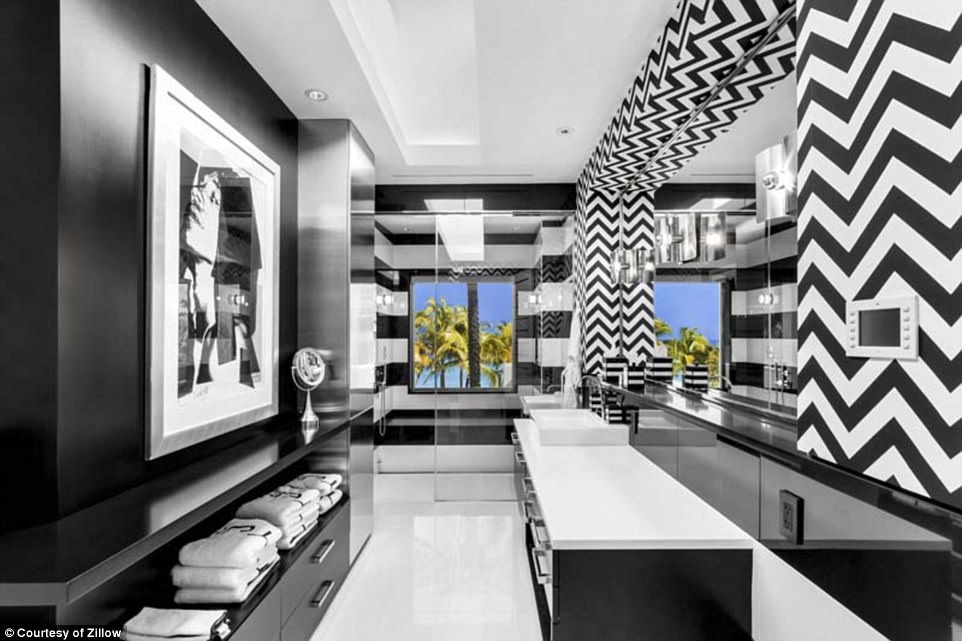 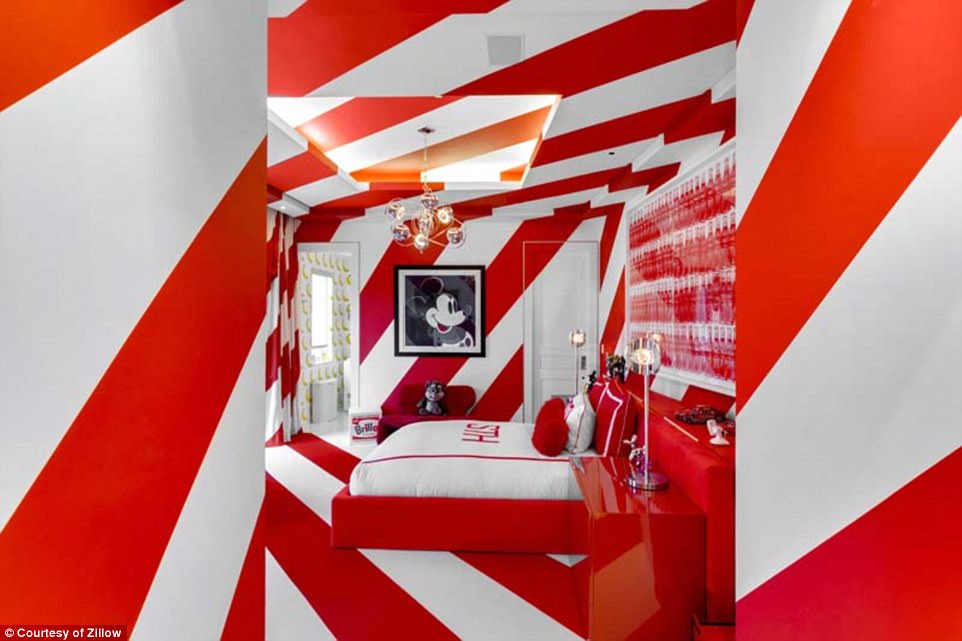 The red room of pain! This flashy bedroom in the Florida mansion which has a very distinctive style 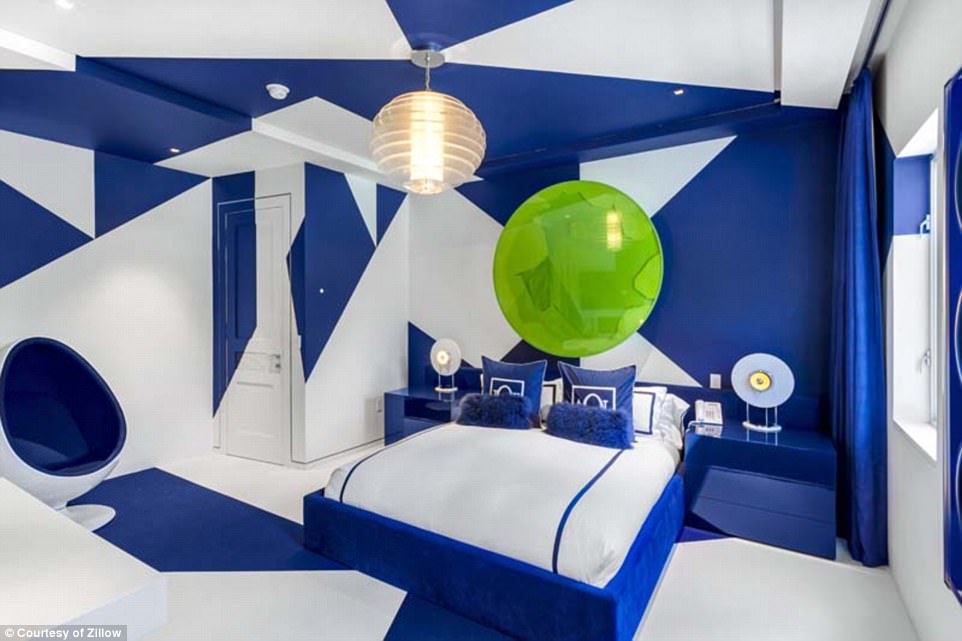 Feeling blue? If you liked the previous room you’ll love this little number in royal blue with a big green globule on the wall