He was in the company of the best of the best, going up against the greatest rugby-playing nation in the world, so it is little surprise Tommy Seymour has no regrets about a summer spent putting everything he had on the line.

The British and Irish Lions’ historic tour of New Zealand back in 2017 was, after all, a once-in-a-career opportunity.

Seymour missed out on a Test spot but grabbed three tries, finishing as top try-scorer, and was a credit to himself and his nation as he gave his all in the famous red jersey.

Yet, looking back, the Scottish winger concedes the disappointing season that followed may have failed to roar after the Lions had taken more than their share of him physically and mentally.

‘I would be hesitant to use the Lions tour to New Zealand as a crutch in the matter but whatever the reason, the Lions or otherwise, there were difficult points for me last season,’ Seymour told Sportsmail.

‘Last year, there was a lot of disappointment and I would be the first person to put my hand up and say I was not pleased with the amount I was able to do for Glasgow last year.

‘It was not a case I felt I was playing really terrible. It was more a case of me feeling I was not able to do some of the stuff I had done the year before when I did get selected for the Lions, which left me very frustrated.

‘It’s hard to give a single reason why my form wasn’t as good as I thought it could have been.

‘I knew I was not in the right head space I wanted to be in for whatever reason and there was a toll being taken in several different areas of my game last season.

‘I don’t regret anything that happened in the way that it did as it (being away with the Lions) was one of the best things I was ever able to do.’

After the Lions tour the 30-year-old went straight back into action for Glasgow Warriors and remained a key member of Gregor Townsend’s international squad through the autumn Test Series and 2018 Six Nations.

Like his club side, however, Seymour ran out of steam at the tail end of last season, with Warriors coming up short in the Pro14 play-offs.

While other players may have looked at another summer tour, this time with Scotland, as an unwanted burden at the end of a long, gruelling season, Seymour was, instead, ready to pack his bags for North America.

It took Townsend to tell him ‘enough’ — that he had earned a reprieve from international duty to rest, recuperate and ready himself for what promises to be another long campaign. 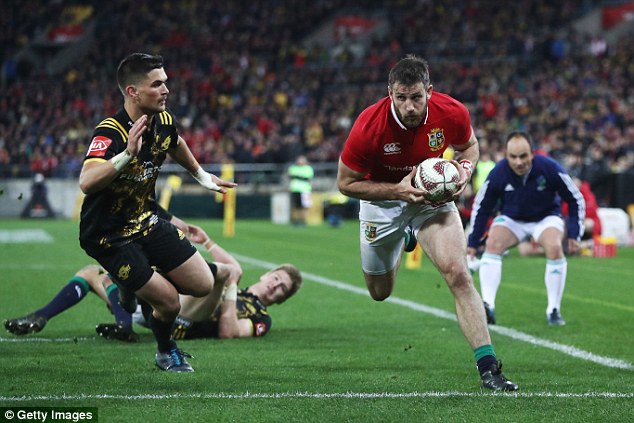 By his standards, Scotland back Seymour (pictured) had a disappointing 2017-18 campaign

‘It was hard to even consider not touring with Scotland as you never want to think you are missing opportunities to play for your country,’ said Seymour.

‘Gregor and I had an open dialogue from the tail end of the Six Nations up until the summer. It was looking like maybe the tour would be an option but he was very keen on me getting a break. When it became less of an open discussion, I realised there was a lot of benefits from it.

‘When I look back now — and feel the shape I am now in — I realise how great it was for me to take a break.

‘For a few years, I’ve had pretty heavy rugby schedules.

‘Over this summer, I managed to have more time off than I ever had since I came to Scotland.’

That Seymour is back in peak condition will be welcome news to Dave Rennie after the Glasgow Warriors head coach did not see the best of him in his debut campaign at the helm. The Kiwi arrived at Scotstoun shortly after the Lions tour to his homeland and, despite being deprived of Stuart Hogg following his injury sustained in New Zealand, made a flying start to the league season.

Seymour, however, wasn’t at his try-scoring best. Now he is raring to go, starting with the season opener away to Connacht in Galway tomorrow afternoon.

‘It is the first time I have done a full pre-season in a long time, which has benefited me hugely,’ he continued.

‘My body feels great and other aspects of my pre-season testing have been better than it has been in a huge number of years.

‘That is down to the amount of rest time I had to allow myself a good physical and mental break from the game.

‘I went to Northern Ireland to see family as I always do and my wife and I went away with her parents and her sisters to Spain for a week.

‘It was just the perfect mental break to allow me to detach myself properly from rugby.

‘Certainly, this summer break has done wonders as to how I am feeling going into the season as the mental side of things have been completely re-set. Fingers crossed I can stay fit and healthy and contribute when needed.’

After the disappointment of losing in the league semi-final play-off last season at home to the Scarlets, Seymour believes only lifting the trophy this term will do for Glasgow.

They may not have made any high-profile summer signings but he believes Rennie’s men will be contenders.

‘Success for us is plain and simple,’ Seymour continued. ‘We won the league once (in 2015) but since then we have not done ourselves justice. The guys that remain from that time will not be satisfied until we win it again.

‘Success for us is winning the league and getting out of the group stage in Europe, as not doing that last season was a massive disappointment.

‘We want progression in Europe and trophies. Tall orders in both categories. If we do not attempt to aim for those levels, we are not in the right head space.

‘Is the time now for us to deliver on both fronts? I think so.’

l Land Rover is the Official Vehicle Partner of Glasgow Warriors and has a heritage in rugby at all levels, sharing and understanding the values at the heart of the game. Follow @LandRoverRugby