Tony Abbott’s electoral rival Zali Steggall sprang into action as one of her volunteers collapsed outside a polling booth.

The uniformed supporter was finishing handing out how to vote cards outside Queenscliff Surf Life Saving Club in Manly just before polls closed at 6pm.

The man, believed to be in his 30, suddenly fell down and smashed his head on the grass turf in front of voters in the northern Sydney electorate.

Ms Steggall instantly ran over and attended to him, refusing to leave his side until an ambulance arrived about 6.15pm, the Manly Daily reported.

He did not appear unwell before he collapsed and just minutes earlier remarked to the candidate how well the day was going.

The man is believed to have suffered serious head injuries.

Ms Steggall is heavily favoured to unseat Mr Abbott in Warringah with early counts showing her with 49.2 per cent of first preference votes.

Recent polls gave her a 56-44 advantage over the former prime minister. 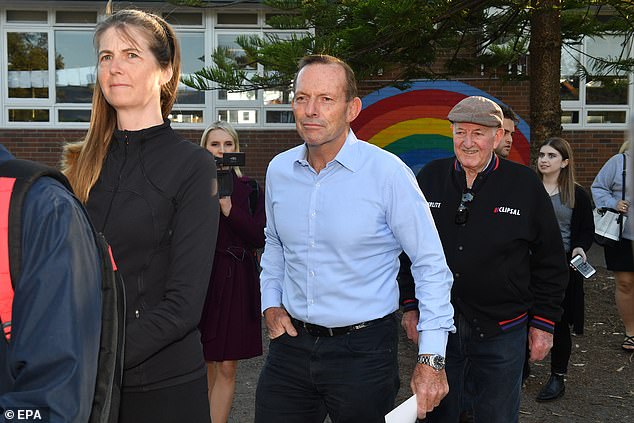 Mr Abbott also had a dramatic election day as he appeared to lose an argument with pupils outside Manly Village Public School.

The youngsters made clear they were unhappy that Mr Abbott has backed Queensland’s Adani coalmine, which will be the biggest in the world and produce more emissions than whole countries such as Chile.

Another girl then jumped in and said: ‘By polluting the world with coal?’ The conversation continued but did not appear to go well for Mr Abbott.