Tony Blair has revealed he hasn’t done housework, laundry or cooked a family meal since 1997.

The former prime minister and Labour leader, 67, claims it was ‘impossible’ to return to ordinary life after leaving office.

He told The Sunday Times Magazine he hasn’t done a weekly grocery shop or even driven a car since the month he entered Number 10.

‘My life’s not been normal since moving into Downing Street,’ he explained, adding that it was difficult to resume normality after office ‘because then you have the whole security apparatus around you and it just changes’.

Tony Blair, pictured in February, has revealed he hasn’t done housework, laundry or cooked a family meal since 1997

Fellow former prime ministers Theresa May and David Cameron have been spotted in local supermarket queues in the past year.

Blair, who runs a think tank and consultancy – Tony Blair Institute for Global Change – admitted that the bulk of the housework during lockdown has fallen to his wife Cherie and their children.

The family have had no staff working at their seven-bedroom rural Buckinghamshire stately home – which Blair hasn’t left in 11 weeks – since March.

Though the ex-PM’s cooking skills have stretched to an omlette, which he made for himself and his son Leo, 20.

Cherie claimed that when she first met her husband, the first thing she would do when she went to visit him was ‘strip the bed, make the bed, and generally try and tidy up the place’. 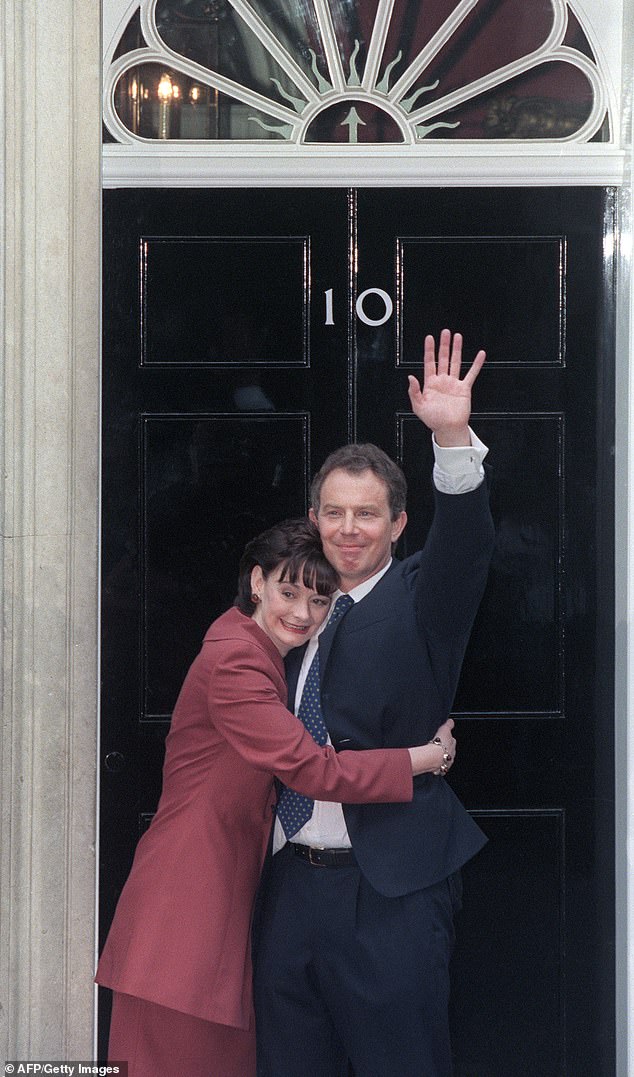 The former prime minister and Labour leader, 67, claims it was ‘impossible’ to return to ordinary life after leaving office. Pictured with wife Cherie outside 10 Downing Street in May 1997, following his nomination as Prime Minister and the Labour party’s landslide general election victory over the Conservatives

The ex-PM and his wife are also isolating with middle son, Nicky, 35, a football agent, his heavily pregnant wife and their two children.

Blair said he has been enjoying ‘family time’ and is in regular FaceTime contact with his daughter Kathryn, 32, who is due to give birth in July and lives in London, along with his eldest son Euan, 36.

He added that he believes a no deal Brexit is ‘the most likely thing now’ – after he campaigned for a second referendum.

‘The information I have from the European side certainly is that they’re expecting this now,’ Blair said.

‘And they assume it is actually what the government would prefer.’ 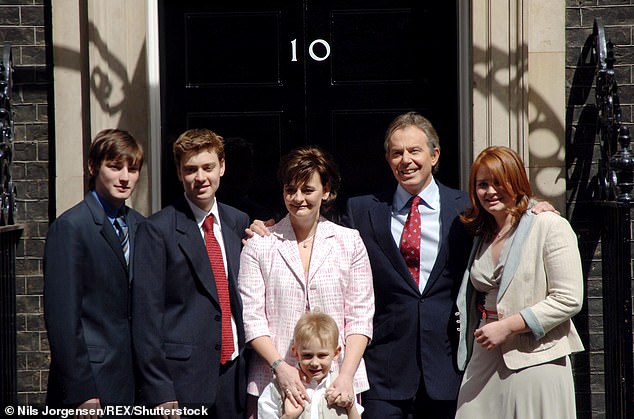 Blair, pictured with Cherie, sons Nicky, Euan and Leo and daughter Kathryn in 2005, said he has been enjoying ‘family time’ in lockdown

He added that he fears for the long-term impact of the coronavirus on the economy, stating: ‘The thing that is terrifying at this stage is the economic damage at the end of it.’

Blair accused the government of publishing ‘confusing’ guidelines which even leaves him unsure of what the rules are ‘lies at the root of the trust problem’.

‘The government has announced a confusing array of three “phases”, three “steps”, five “tests” and five “alert levels”,’ he said.

‘These overlap with one another substantially, are poorly defined and assessed in opaque ways, and are not linked explicitly to the lifting of different restrictions. This opacity leaves the impression that considerations other than risk are governing the pace of easing.’

He said he believes the government strategy for easing lockdown should focus more simply on the R rate and the number of new cases every day – a scheme that would require mass testing.

Blair added that this is the only method he believes will ensure the economy open safely, and despairs that the government is ‘not even debating’ implementing testing on the scale required.