Last week, Steph Booth wrote movingly about how dementia – now Britain’s biggest killer – claimed the life of her husband, the actor Tony Booth. Tony, the father of Cherie Blair, had lived with Alzheimer’s for 13 years until his death in 2017. Here, in the final extract from her new book, Steph uses her own experience to provide 20 vital tips for anyone caring for a dementia sufferer.

Dementia is a cruel disease. It destroys an individual’s personality bit by agonising bit, and the misery of seeing that happen is unspeakable. It is not a disease like cancer or heart failure, where the medical profession can offer timelines, support and – in the case of cancer – the hope of remission.

Dementia is unique to the person who has it. All we can do is wait and watch to see what happens next.

One of the things to have occupied my thoughts since Tony died is what advice I would give to people who find themselves caring for someone with dementia. Things I wish I had known or been told when Tony was first diagnosed. I’ve put together ideas I hope might be helpful – and that is all they are, my thoughts gleaned from experience.

‘Don’t be like me and wait until you hit breaking point before contacting social services’: Steph and Tony Booth in 2014

1. Dementia isn’t that easy to spot or diagnose. We can all be forgetful: how many times have you got to the top of the stairs and completely forgotten why you are there? This is not dementia. Signs of confusion are the clearest indicators that perhaps something more serious is going on.

I became concerned when I realised Tony was beginning to mix up reality with fictional characters in a book he was reading.

Personality changes are another indicator. Talk to your GP if you notice anything like this. Diagnosis can be a lengthy process that may involve numerous visits before you get a referral to a memory clinic.

2. Once you have a diagnosis, do not allow yourself to be shunted out of the doctor’s office with the blithe assumption you will be able to cope. That wouldn’t happen with any other long-term disease and it shouldn’t happen with dementia. Care and support must be specific to the sufferer’s needs. Don’t be embarrassed to be assertive. You are the carer and you know them best, no matter what the doctor tells you.

3. Sort out your finances. I found the Department for Work and Pensions website confusing but don’t give up. Ask your GP for a referral to adult social services. It was thanks to our brilliant social worker that I found out, a bit too late, that I was probably entitled to the Carer’s Allowance. There is no one-stop shop to resolve problems, so perseverance is key.

4. Attend to legal matters early, including making wills and organising power of attorney. Don’t wait for a crisis or, worse, get to the point when the person with dementia is no longer able to give informed consent. Power of attorney will allow you to deal with important matters, including the benefits system, on their behalf, as and when they are no longer able to do so. 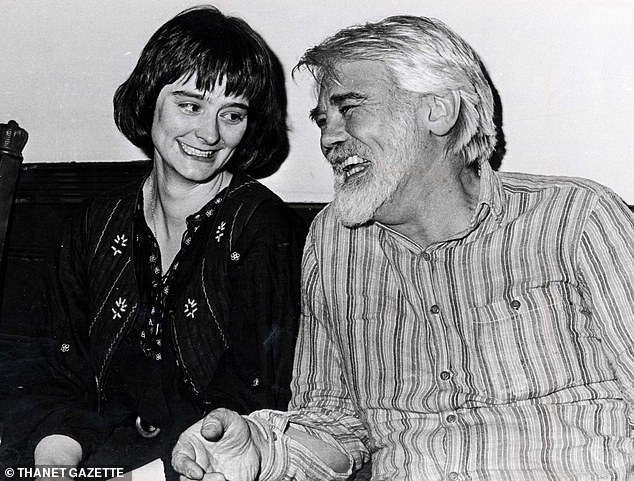 ‘The point is, there is such a thing as a good death. Tony wanted to be at home, and he was. His daughter Cherie Blair [above, with her father] and I were there at the end, and it was peaceful. It’s important to talk about what they want while they are still able’

5. Make it a priority to find a good care home – one where you would be happy to leave them, so you can have a guilt-free, or at least a less guilty, respite break. Don’t be afraid to ask questions and keep looking until you find one that is suitable for your needs. This took me too long to learn and I didn’t do Tony or myself any favours by delaying it.

6. Don’t be like me and wait until you hit breaking point before contacting social services. They can offer different kinds of support, including day centres. Tony started going to a centre through a social services referral and it was a massive help in terms of having time and space to myself.

7. The person with dementia can find it difficult to accept their illness, but it is sometimes the reactions of other people, particularly family members, that may be surprising and unhelpful. Even when the evidence is clear, some refuse to accept the diagnosis.

I realise now it would have been better for everyone if I had not allowed myself to become distressed by their lack of understanding and support. Not everyone reacts well in a crisis. A critical lesson to learn as a carer is to focus on the positive. Prioritise what is helpful and move on from what is not.

8. For a short while after Tony was diagnosed, people we knew would avoid us because they had no idea what to say. This can be hurtful, but my advice would be not to worry about what they think – there is no shame in dementia. If they are finding it difficult, that’s something they will need to overcome. I found, for the most part, that once people were over their initial fears, things went back to how they were.

9. One of the most important points I want to get across is to try not to feel guilty. I struggled with that but there will be good days, not so good days and truly awful days. On the awful days, when you feel your head might just explode, you are allowed to grumble or even to shout at your partner. You do not become a saint when you become a carer. With the best will in the world, it is hard to answer a repeated question as if it is the first time of asking or listen with rapt attention when you are being told the same story again and again.

10. Don’t panic. Don’t assume it is all immediately downhill following the diagnosis. There may well be a good few years before things begin to get really difficult.

11. Have fun together. Make a joint bucket list and do as much of it as you can. You will need these memories to hold on to when the person you love starts to retreat from life and from you. When Tony was too frail to travel far, I joined the National Trust and Royal Horticultural Society. Both have pleasant gardens with a plentiful supply of benches for rest stops and they usually have a nice tea room. These were the perfect ingredients for Tony when we had a day out.

12. Register with the Herbert Protocol (met.police.uk/ herbertprotocol). You can upload a picture of your loved one, along with their description, and this can be accessed by any force should they go missing. Once, after a long car journey to Aberystwyth, Tony leapt out of the car almost as soon as I’d pulled up and rushed off to find a loo, and then disappeared.

I was frantic, but the police found him quickly because I’d registered and they knew exactly who they were looking for.

13. Local groups can be a good source of support – but it’s worth shopping around for one that feels right for you.

I always avoided the ones specifically for people with dementia or carers as any free time I had was for me and I would seize that time to do things I wanted to do beyond the dementia bubble. Instead, I helped to set up Dementia Friendly Todmorden, a group that meets in cafes where the public and those with dementia and their carers can come together.

14. Face up to the fact that palliative end-of-life care must be discussed sooner rather than later with your loved one. With everything else going on, this can be a really tough issue to tackle, and finding the right moment is the first hurdle. One day during a conversation about hymns, Tony started talking about his funeral wishes. To wind me up, he said he wanted to have Great Balls Of Fire played at his cremation, which I ruled out.

The point is, there is such a thing as a good death. Tony wanted to be at home, and he was. His daughter Cherie Blair and I were there at the end, and it was peaceful. It’s important to talk about what they want while they are still able.

15. Sometimes it can feel as if the easiest thing to do is to jump in and do things for them. But no matter how frustrating it is, try not to. A skill forgotten is a skill that can never be relearned.

Getting dressed used to take Tony for ever, but being able to do so meant he kept some independence and dignity. Buttons were a particular nightmare, so long-sleeve T-shirts and fleece jackets were the solution. The zips on the jacket were a nuisance, but I could fasten those for him. 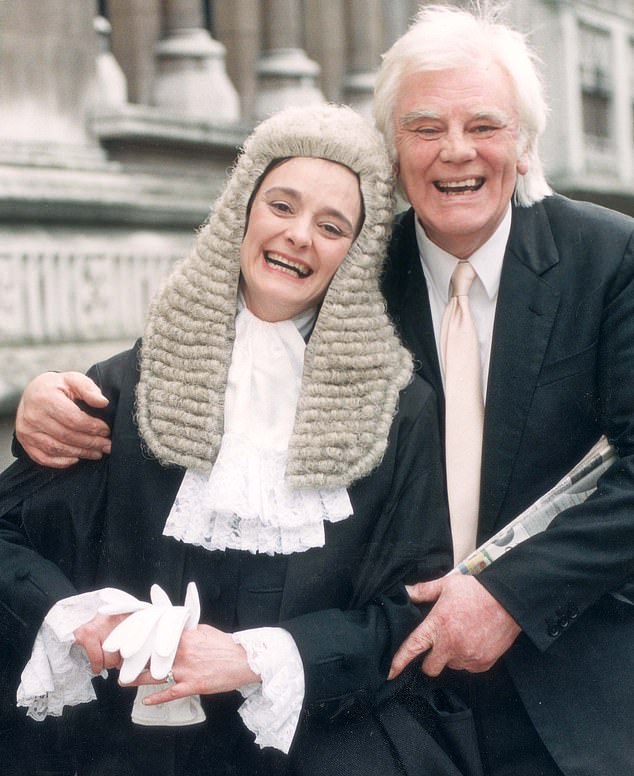 Tony had lived with Alzheimer’s for 13 years until his death in 2017. (Above, with his daughter, Cherie, after she was sworn in as a QC)

16. Towards the end, Tony slept a lot during the day, which often meant he was restless at night. He also became afraid of the dark, especially after he began suffering from hallucinations. I discovered that a dimmer switch in the bedroom was more calming for him than a lamp left on, perhaps because the dimmer created a more ambient light and didn’t seem to create so many shadows. We were still sharing a bedroom and I found it also made it easier for me to sleep too. I only wish I had discovered this simple solution much sooner than I did.

17. Our dogs were a comfort to Tony. Pets give unconditional love and affection, the kind of easy, undemanding relationship people with dementia need.

You can always borrow a dog for a few hours if you think this would work for you.

18. I have been reliably informed that red wine is full of antioxidants and they are brilliant for reducing stress levels. I’m not suggesting for one moment that carers become dependent on alcohol, but sometimes the sound of the cork being pulled from a bottle of wine can be one of the most wonderful and soothing sounds.

19. Relax and put your feet up whenever you get a chance. Maintaining your own health is important.

20. There are organisations offering help and support, but here are just a few you might find helpful. Don’t be afraid to cherry-pick, taking only what is useful for your current situation.

Use Age UK (ageuk.org.uk) for advice and information on money, care or health.

The Care Quality Commission (cqc.org.uk), which inspects care homes, is a good starting point when you are looking for some respite care.

The Alzheimer’s Society (alzheimers.org.uk) is a charity for people with dementia and their carers. It also has a helpline – 0300 222 11 22.

Shared Lives Plus is an alternative and flexible service provided by individuals and families in local communities. It is not yet a national organisation, but find out more by calling 0151 227 3499.

Social services can be accessed through your local or county council. They can help you to find out what benefits you might be entitled to and which support services are available in your area.