Tony Drewitt-Barlow ‘given 18 months to live’

Tony Drewitt-Barlow (pictured left), from Essex, made history in 2000 by becoming the first same-sex surrogate parent in Britain along with his partner Barrie (pictured right)

One of Britain’s first gay fathers has been given just 18 months to live after being diagnosed with throat cancer, his daughter has revealed.

Tony Drewitt-Barlow, from Essex, made history in 2000 by becoming the first same-sex surrogate parent in Britain along with his partner Barrie.

But he is now facing a slim chance of survival after aggressive throat cancer from more than a decade ago returned.

The fatal diagnosis has been revealed by his 18-year-old daughter Saffron – who has been described as the ‘ultimate daddy’s girl’ after the couple lavished her with gifts and a £5,000-per-month allowance.

The disease is said to have reappeared despite several rounds of chemotherapy – with the ‘whole side of his face gone’.

Tony is now waiting to have an operation in Florida, where the millionaire couple live with their five children for half the year.

Doctors fear that sepsis could set in but he is on antibiotics in a bid to keep the risk of infection down.

Saffron told the Sun: ‘They’ve given him 18 months to live if he doesn’t have the operation. If he has the op, there’s a 50/50 chance he’ll live.

‘We’re all devastated. My Daddy (Barrie) never shows emotions but he is completely beside himself.

‘I think Dad’s glad that he’s having it done so he can get on with his life. But he’s sad that he has to have it at all. He’s scared too.’

Since their surrogacy in 2000, the wealthy couple have garnered headlines and magazine deals with their children – become trailblazers within the LGBT community.

Now estimated to be worth more than £38million, a fortune built on medical testing companies, the couple lavish their four sons and one daughter with gifts. 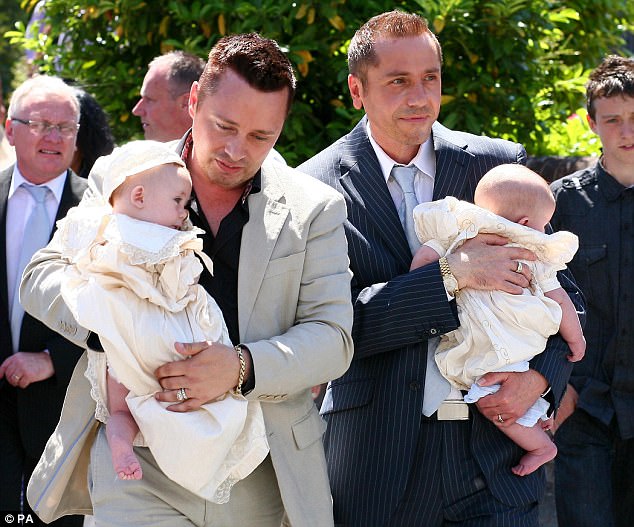 Barrie and Tony (pictured right) are seen in 2010 with their twins Jasper and Dallas following a christening service in Danbury, Essex 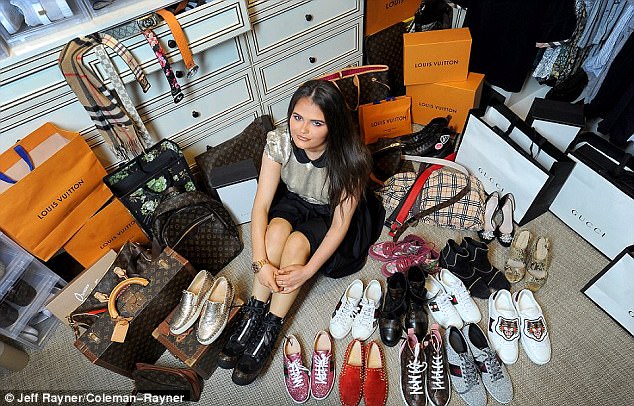 Tony’s daughter Saffron (pictured) told the Sun: ‘They’ve given him 18 months to live if he doesn’t have the operation. If he has the op, there’s a 50/50 chance he’ll live’

They even gave matching £110,000 Porsches to their oldest, twins Aspen and Saffron, on their 16th birthday.

She now has a collection of designer clothing and shoes worth more than £1million – including a single ring valued at £450,000.

Earlier this year, Barrie and Tony announced they are trying to extend their family further, using two surrogates and gender sex selection in order to have more daughters — since there is ‘too much testosterone in this house’.

To mark her 18th birthday at the end of last year, Saffron revealed the extent of the wildly extravagant lifestyle that comes courtesy of her millionaire parents.

The contents of her fabulous wardrobe total £1 million — which, coincidentally, is the same sum Saffron now owes her parents after they invested in her very first business venture.

‘I know I am incredibly lucky,’ she says. ‘Dad and Daddy love the finer things in life, and that’s something they have passed on to me.

‘They have always been incredibly generous and love spoiling my brothers and me. 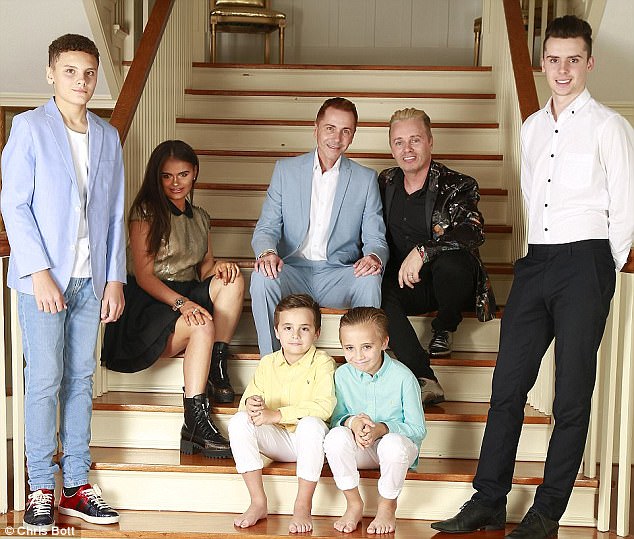 Saffron is pictured with her dads Barrie (seated right) and Tony Drewitt-Barlow as well as her brothers (from left) Orlando, Dallas, Jasper and Aspen

‘They aren’t afraid to let people see how we live. They’re self-made, and they tell us that if you make your own money then you can choose to spend it how you like.’

‘Daddy’ is the name Saffron gives to Barrie, while she calls Tony, her other parent, ‘Dad’.

And while Saffron still enjoys a £5,000 monthly allowance, she knows she can’t rely on her daddies’ continuing indulgence because now that she has come of age, they have told her that they expect her to get a job and fund her own lifestyle. ‘Daddy (Barrie) sat me down and said that while they love spoiling me, I’m growing up and it’s time for me to get a job,’ she explains.

‘He said he and Dad are self-made millionaires, who grew up on a Manchester council estate, and they want me to make my own way in life and be as successful as them.’

Barrie and Tony have a combined wealth of £40 million generated from a range of business interests, including a highly successful medical research company with branches around the world.

As well as expecting their children to earn their own money, Barrie and Tony have also told them of their intention to leave most of their fortune to charity.

Now 18, twins Saffron and Aspen are the oldest offspring of Barrie and Tony Drewitt-Barlow, the gay British couple who pioneered the ‘double dad’ family – and have turned it into a financial success.

In their first full interview, with the Daily Mail in 2016, Aspen said: ‘I have felt loved and that’s what is important.

‘Dad and Daddy have been incredible fathers. Dad and Daddy say their greatest achievement is having us and I’m proud of them as it wasn’t always easy, although they have shielded us from any negativity.

‘Like all parents they can also be a bit embarrassing at times. Daddy is very flamboyant. During school sports days he starts screaming and shouting, making himself the centre of attention.

‘He’s just so gay all the time. Sometimes it makes me cringe but I love him for it too.’

Saffron added: ‘Daddy is the one I turn to when I need advice. I share everything with him, he’s an amazing listener. That said, both Dad and Daddy can be really strict and they both vet my boyfriends.

‘There are so many dads having families it is now just normal. I don’t think any of us understand just how hard it was for Dad and Daddy when they began but I’m proud of them for proving the doubters wrong and being such good role models for us.’