‘Too hot to sleep anywhere but the kitchen floor!’ Bleary-eyed Britons endure a restless night

The UK is set for another scorcher today with highs of up to 82F after many complained the hot weather was making it impossible to sleep last night.

Social media users took to Twitter overnight to express their discomfort at the hot conditions, with many saying that the UK is just ‘not built’ for this sort of weather.

Britain baked yesterday in soaring temperatures which reached 91F after a Saharan Bubble swept across the UK and Europe, pushing most of the population to the great outdoors to enjoy a stroll on the beach or even a walk in the park.

Today will see a drop in temperatures following the deaths of five people across the country, due to weather related issues.

A cooler UK will also be welcomed by many festival goers at Glastonbury today after 70 revellers were treated at the Somerset site after falling ill due to the hot weather.

Stunning shots from the early hours of this morning show the sun rising in KeyHaven Harbour in The New Forest, as temperatures as set to soar again today 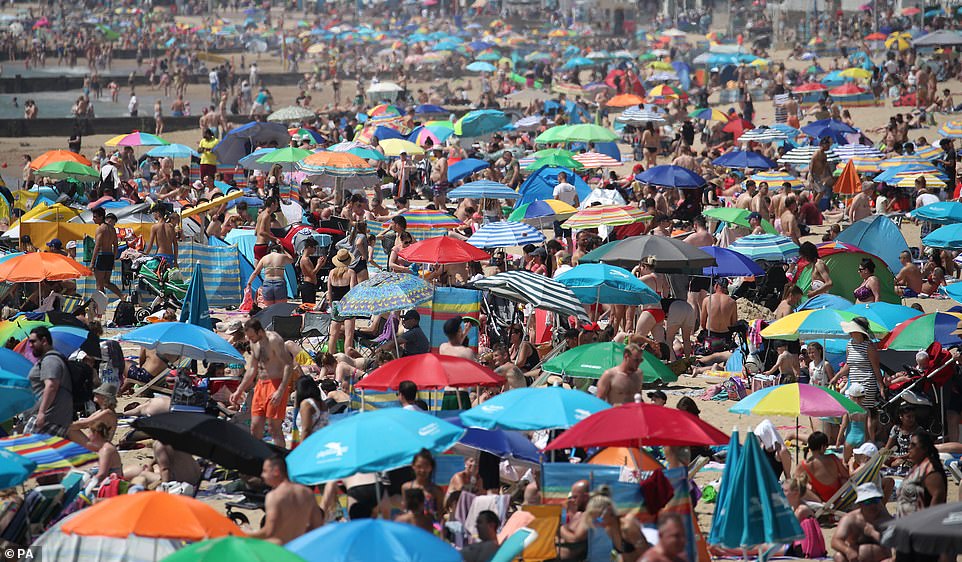 Parasols at the ready! Many people flocked to Bournemouth beach yesterday as temperatures soared across the UK 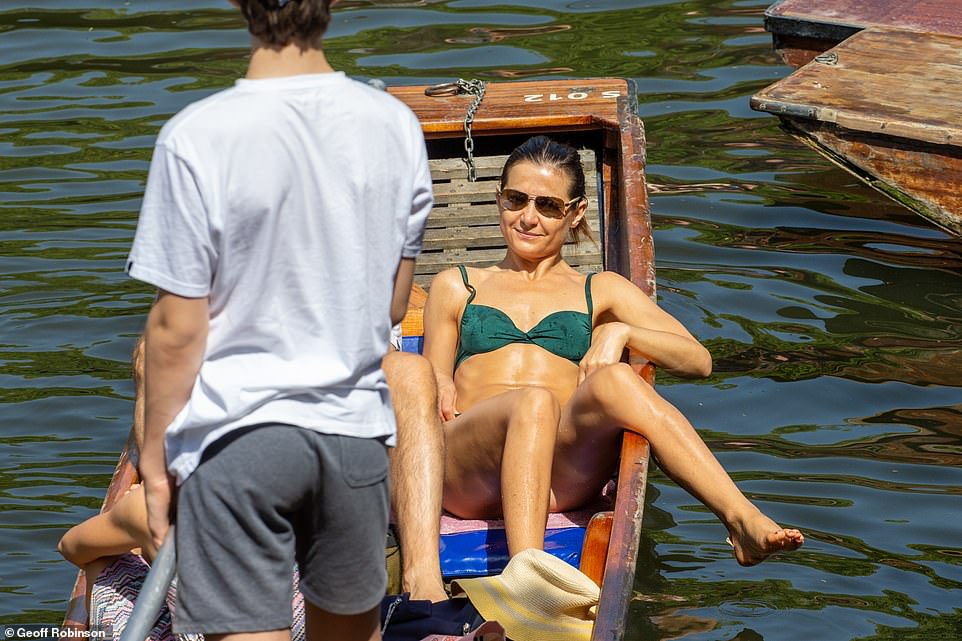 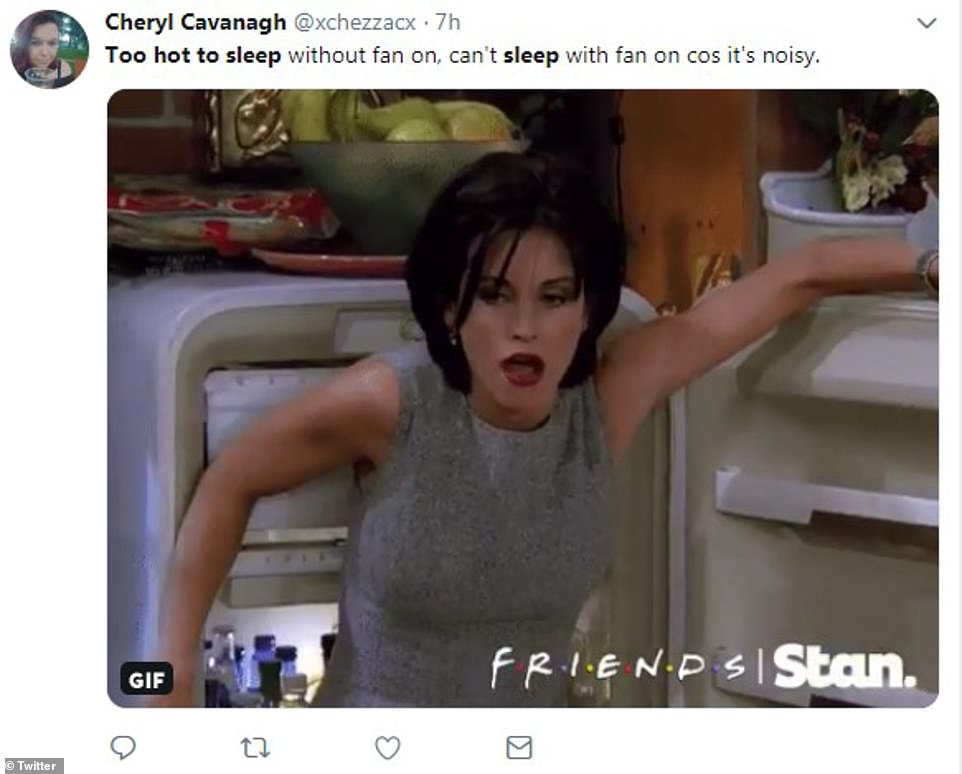 People took to social media to express their discomfort at the warm weather, with many people saying it was simply just too hot to go to sleep 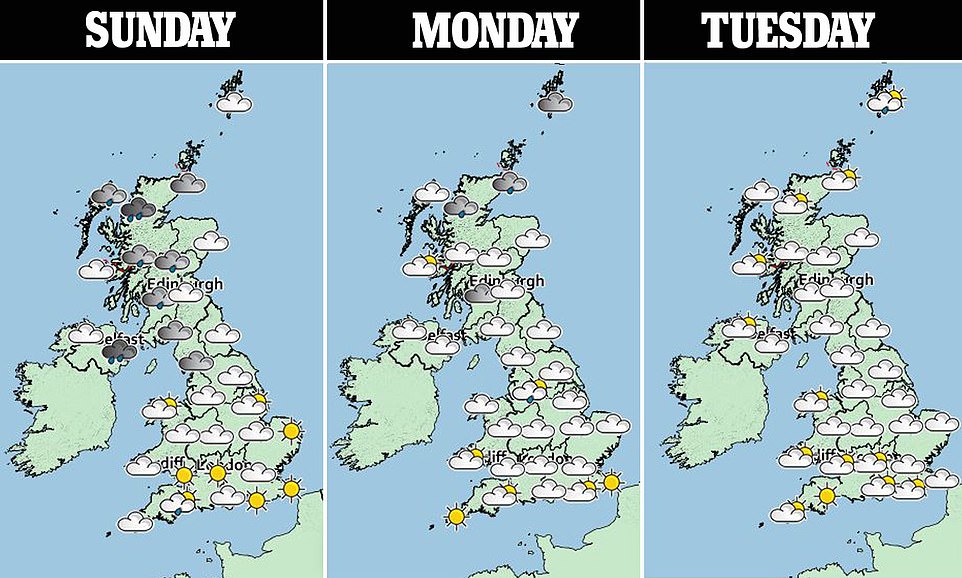 Forecasters are predicting a ‘massive drop in temperature’ to finish the weekend – although conditions will remain warm.

‘It will be nowhere near as hot as yesterday; today (Sunday) we’re looking at 26 to 28 degrees in East Anglia, London and parts of Kent,’ said Met Office meteorologist Alex Burkill.

Taking to Twitter, one person who seemed to have had enough of the weather said: ‘IT’S TOO HOT TO DO ANYTHING I’m sick of this heatwave I just want one night sleep in the chilly UK I beg.’

Over the last few days people have been tweeting their dismay at the warmer conditions, with tensions reaching an all time high last night as many said the UK just couldn’t cope.

Many also started to create memes of well-known characters such as Bugs Bunny putting a pillow over his head, as well as Spongebob Square Pants standing next to a sunshine. 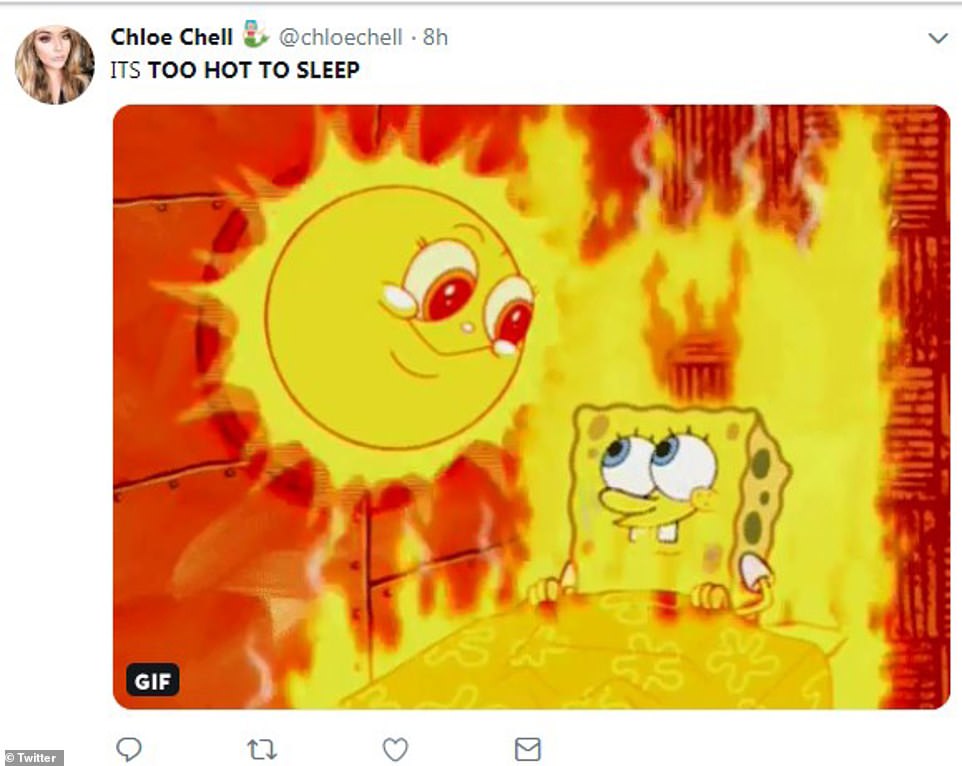 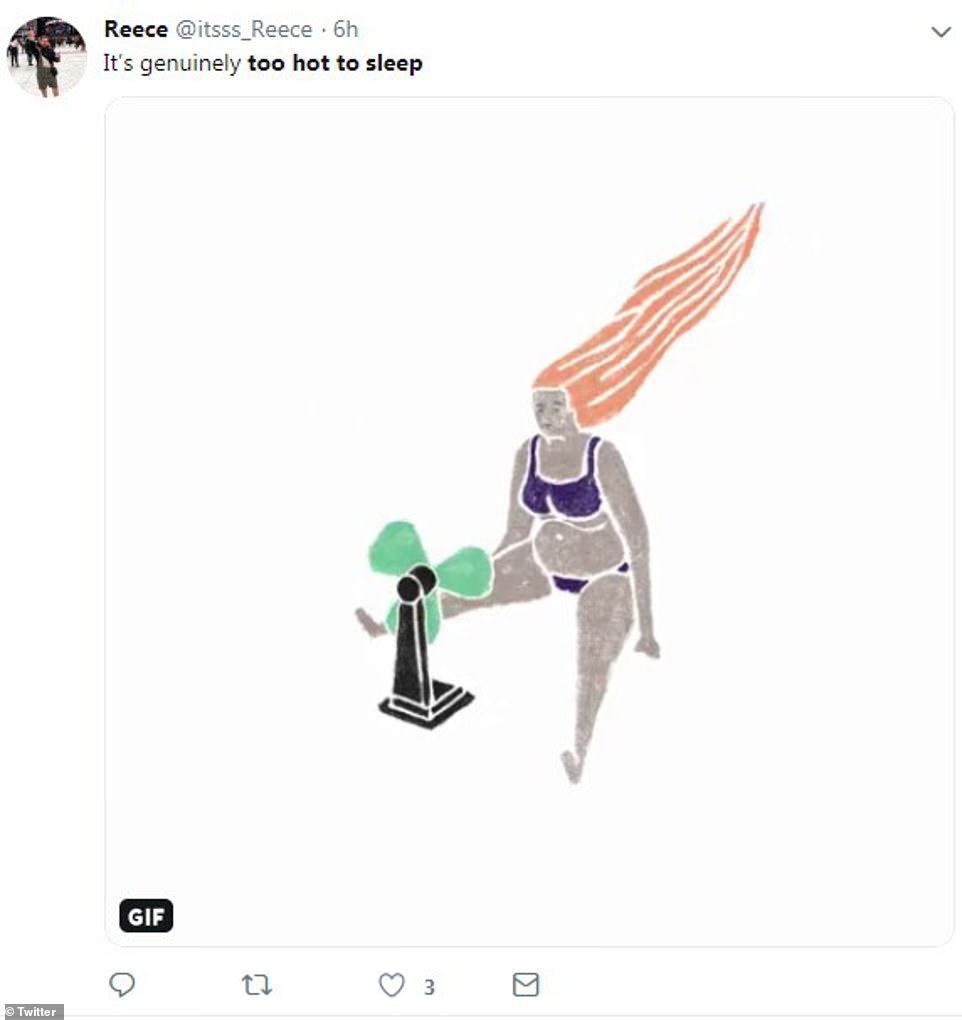 One Twitter user posted this hilarious GIF of a woman sat next to a fan wearing her underwear, saying that it was genuinely too hot to sleep 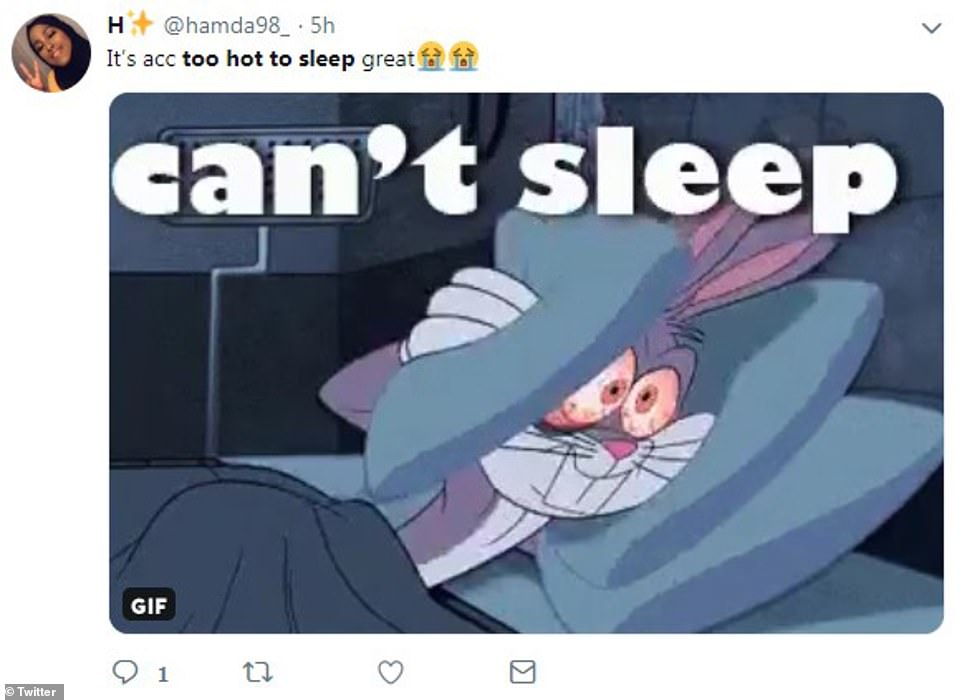 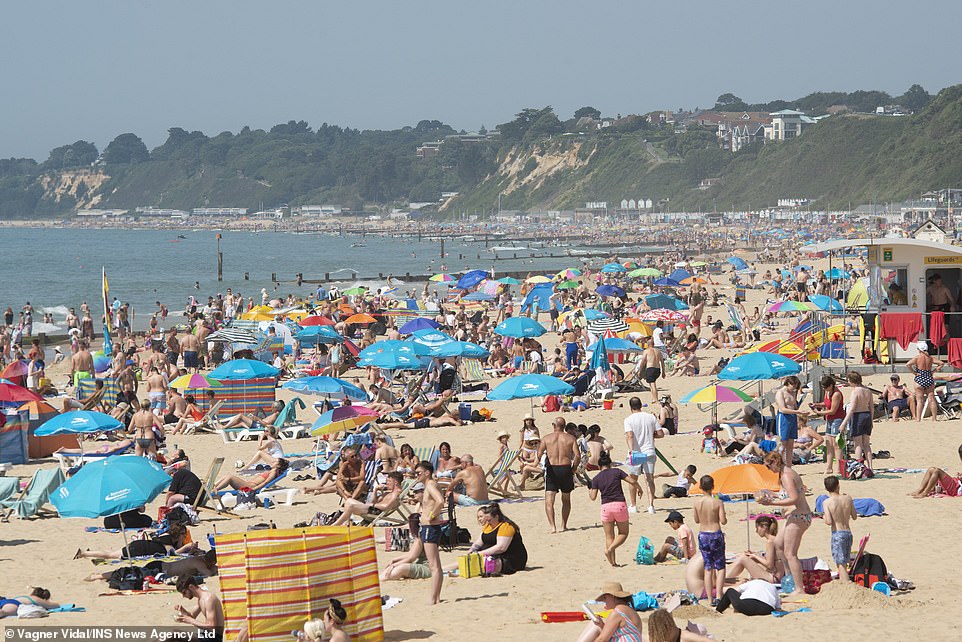 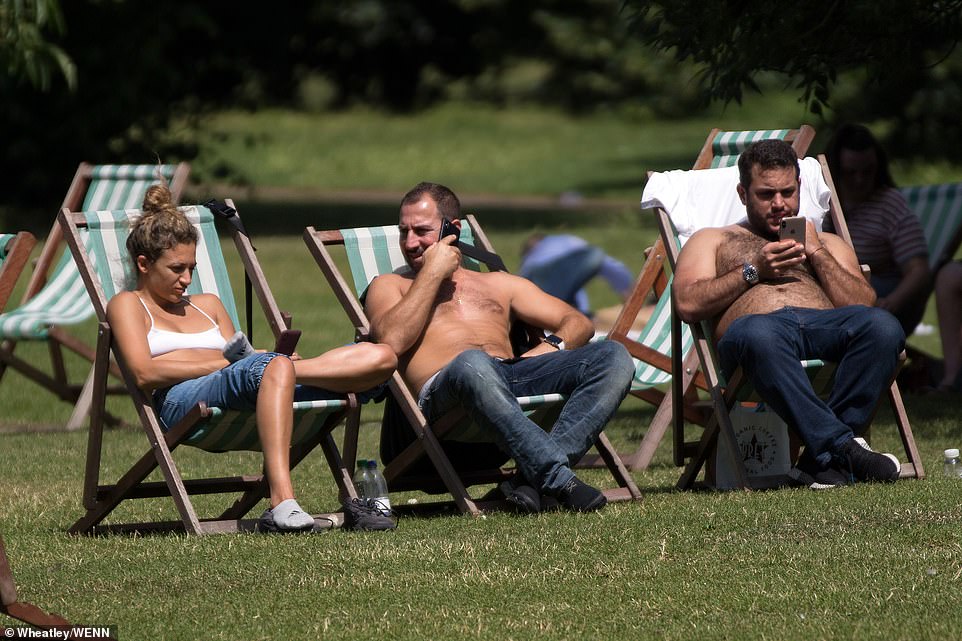 Others poked fun at the fact that despite being in the UK, which is famed for its wet weather, they were unable to sleep despite it being in the early hours of the morning.

One social media user said: ‘Be prepared for 30+ degrees tomorrow (UK) might as well spend the whole day in the garden *too hot to sleep even at 3am’.

Another Twitter user said: When it gets hot in the UK, everything goes to pot. The tarmac in some places MELTS, fridges stop working in shops, trains stop working properly because the tracks are too hot…we aren’t equipped for it’.

There will relatively cooler weather across the country today but the Met Office has said there will still be ‘plenty of sunshine’ across most of the country.

Some cloudy weather will be seen at time, particularly across the west of the UK, but conditions will remain dry with maximum temperatures of 78.8F.

Another social media user said that it was too hot and that the UK was not made for summer, following days of high temperatures

Those who failed to get a decent sleep last night will be pleased to know that the evening will once again be warm, with sunshine continuing until late.

It will be a mostly dry night with long clear spells with clouds possibly making an appearance later on in the evening.

This is while northern parts of the country will see some showers later on in the evening.

‘Some places will see showers with bursts of 10 to 15 millimetres in an hour, but it won’t be especially heavy,’ said Mr Burkill.

Minimum temperatures will be at around 53F, a welcome change to many people who struggled to nod off last night.

Monday will see the return of typical UK weather, there will be sunny spells to kick start the day, but on a whole it will generally be cooler and cloudier for most of the day.

Cloud will clear later on in the day and make way with some evening sunshine, while it will be breezy for those living along the Channel coast, maximum temperatures for Monday are set to reach around 73.4F.

The rest of the week will still be sunny but a nice breeze will be felt across most of the country as some light winds take hold.

People flocked to the seaside to make the most of the hot weather on Saturday, while Tesco said sales of barbecue food had soared.

The supermarket predicted it would sell more than one million packs of sausages, 650,000 packs of burgers and 50,000 disposable barbecues over the weekend.

Several European countries have reported record temperatures this week, including France which hit an all-time heat record of 44.3C (111F) on Friday.

As a new working week approaches, rain is predicted through central parts of England on Monday.

Despite the threat of rain on Tuesday and Thursday, dry conditions are forecast for the rest of the week with sunny spells and average temperatures ahead.

It will come as a relief to many work across the UK’s coast after it was revealed yesterday that a fifth person had died.