Top 10 moments from Lisa Wilkinson’s debut on The Project

It’s been one of television’s most anticipated shows.

And on Sunday night, Lisa Wilkinson finally made her debut on The Project.

Looking back at her ten top moments, the 58-year-old veteran journalist lead the panel as she stunned in red and captivated audiences all over the country.

Making her return to television! Lisa Wilkinson’s debut on The Project on Sunday night was not without any drama

Although she’s now at a new station, it appears as though Lisa hasn’t left her manners behind.

Taking  a moment to thank her fans for their ongoing support ahead of her switch, the brunette beauty took a slight dig at her former network.

Retelling a story from when she met a fan earlier in the day, she said they’d told her, ‘Lisa, you’re going from a nine to a ten!’, leaving her co-hosts in stitches.

Over the past few days, media attention has been directed at the Vanity Fair’s photoshop fail that left Oprah with three arms and Reese Witherspoon with three legs.

And after Jessica also appeared in the shoot with all limbs in tact, Lisa asked the Hollywood star what she thought about the major error.

Admitting that she could see Reece’s extra leg but not Oprah’s hand, the new host said she must’ve been ‘confused’.

‘You might have confused maybe the lines on the waist but it’s actually there’s definitely three hands there!’ 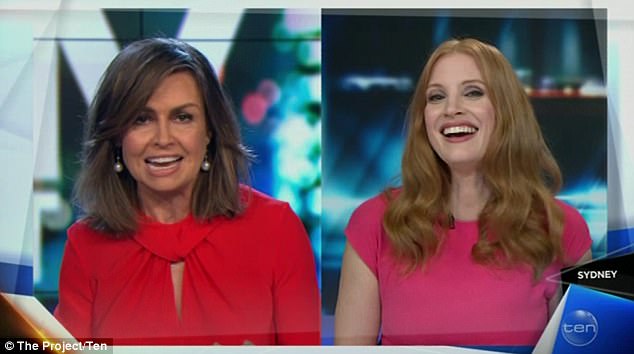 Making no new friends: After Jessica Chastain revealed she couldn’t see anything wrong with Oprah in the Vanity Fair failed photoshop photo, Lisa said she must be ‘confused’

3. Lisa suffers from a wardrobe malfunction and fumbles around her breasts live on air

As smooth as her first show was going, Lisa suffered from a wardrobe malfunction after returning back from a break.

‘Just fell down my microphone. I have done a little thing in front of the audience,’ she said fumbling around her breasts.

Continuing to draw attention to the malfunction, co-host Rachel Corbett joked: ‘fishing around in her boozies!’. 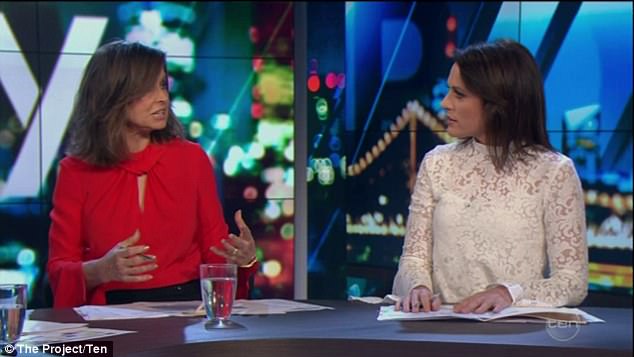 No warm up time! After a slight wardobe malfunction where Lisa’s microphone fell down her shirt, co-host Rachel Corbett joked: ‘fishing around in her boozies!’

Appearing as the show’s first guest, Joel Creasey joined the panel to open up about his new ‘typecast’ character on Neighbours.

‘He is a gay man, a bit of a stalker. Where did you draw your inspiration from?’ she asked the comedian.

Playing along and keeping the mood lighthearted, the 27-year-old jokingly replied: ‘My experiences on Grindr’.

5. Lisa cuts off Julia Morris during her live-cross

Speaking to I’m A Celebrity…Get Me Out Of Here hosts Julia Morris and Doctor Chris Brown, Lisa was seen cutting off the comedian during her live cross.

Cutting her off, she said she was just worried the comedian would spill the names of the contestants before the show’s debut.

‘I hung in there because I thought she might give it away,’ said Lisa. 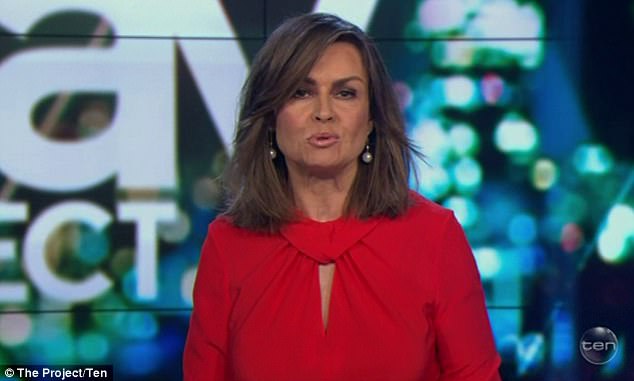 Oops! Speaking to I’m A Celebrity…Get Me Out Of Here hosts Julia Morris and Doctor Chris Brown, Lisa was seen cutting off the comedian during her live cross

6. Lisa’s makes her interview debut with a heart wrenching story

Fans have been waiting since October to find out what Lisa’s first story will be on The Project.

And after promising a story that would ‘break your heart in the best possible way,’ she didn’t disappoint.

Covering the narrative of professional footballer Jeremy Brockie wife, Jess, and how she became a surrogate for best friend Bec, the story was told without a dry eye in the house.

Unfortunately, Bec who was diagnosed with cystic fibrosis passed away in September last year, four months before her baby Rixon was born. 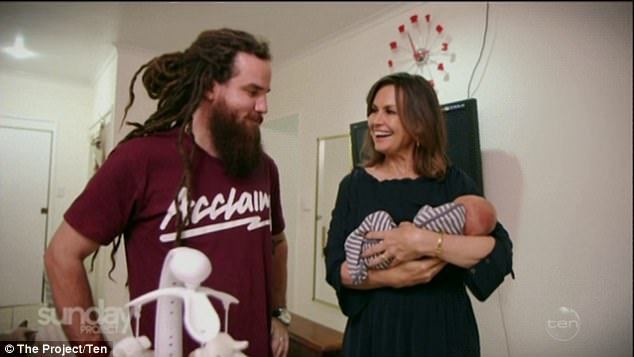 Reporting on the very touching story, even Lisa couldn’t help but get teary.

And Lisa wasn’t the only one, with the cameras showcasing all the panel wiping away their tears after the package was played. 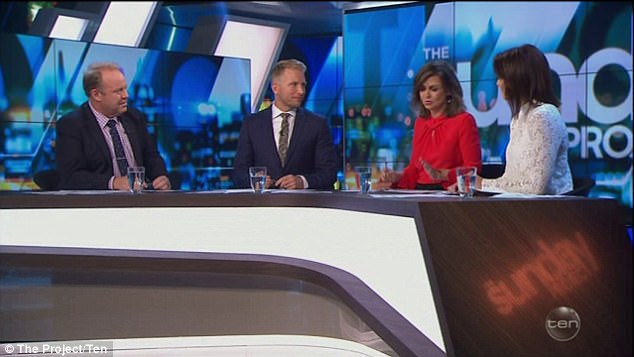 Touching story: Lisa wasn’t the only one getting teary after her touching package, her co-hosts were also caught wiping away their tears

8. Peter Hellier teases Lisa on the groundbreaking of news she’ll be reporting on The Project

Covering all the world’s top stories, Lisa’s stint ended with her revealing Reba McIntyre had been named as KFC’s first female Colonel Sanders.

‘She sports a mustache while she belts out a song about chicken. Most people are happy women have finally broken the “Fried chicken ceiling,’ she said.

With the lead anchor known to cover the headlines, without hesitation, Lisa claimed the top spot.

The lady in red stood out from the team and progressed to read the top news stories. 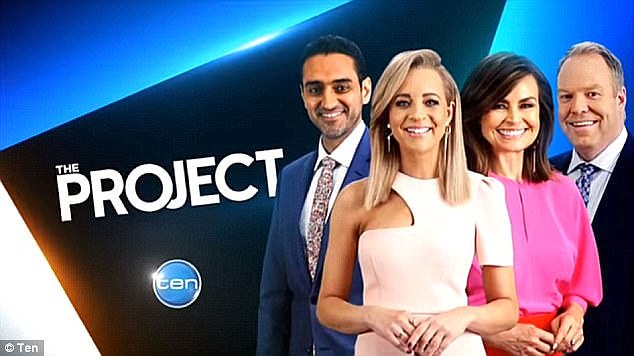 Watch out Carrie! With the lead anchor known to cover the headlines, without hesitation, Lisa claimed the top spot

Stunning in red, they were quick to comment about her stunning look for her debut episode.

Donning a modest blouse, it sported a tiny key-hole cut out at her chest. 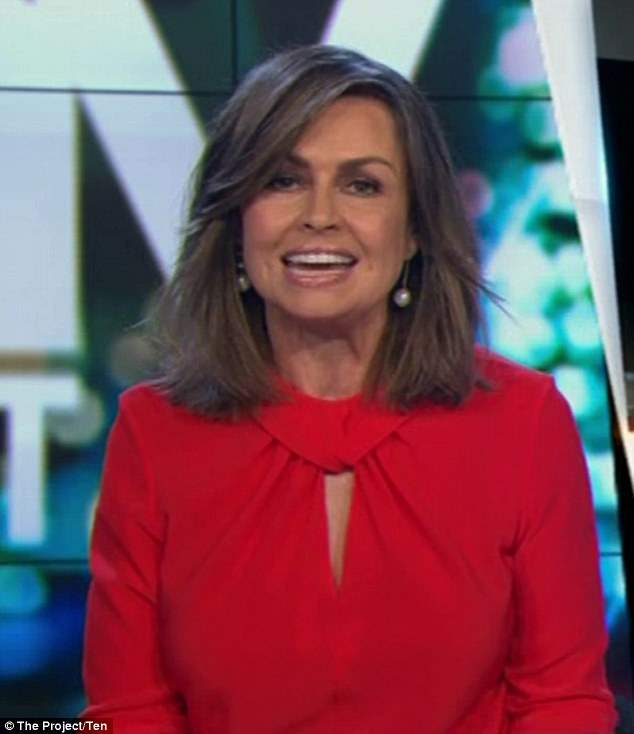 lady in red! Donning a modest blouse, it sported a tiny key-hole cut out at her chest