‘I’m very pleased with it and they are pleased as well,’ Clyburn said, referencing his own reaction and that of his three daughters to the Harris announcement, which came Tuesday afternoon via text message. ‘And as are women all over this nation – not just African-American women, but all women I think are proud of this and are looking forward to a successful campaign.’

Clyburn spoke to reporters on a Zoom call as Democratic women, including some who were also vying for the veep spot, reacted positively to Harris as the pick.

On a Zoom call Tuesday, Congress’ top black Democrat, Rep. Jim Clyburn, heralded the pick of Kamala Harris for vice president one that would excite ‘all women’ 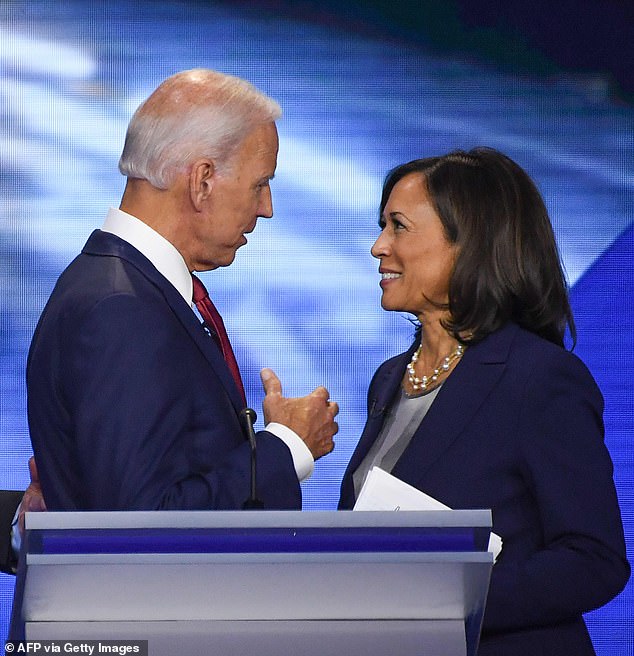 THE TICKET IS SET: Joe Biden’s (left) campaign revealed via text message Tuesday that he had chosen Sen. Kamala Harris (right) as his running mate

Democratic women who were also being considered, like former 2020 contender Sen. Elizabeth Warren, chimed in on Twitter on the heels of the Biden campaign’s announcement 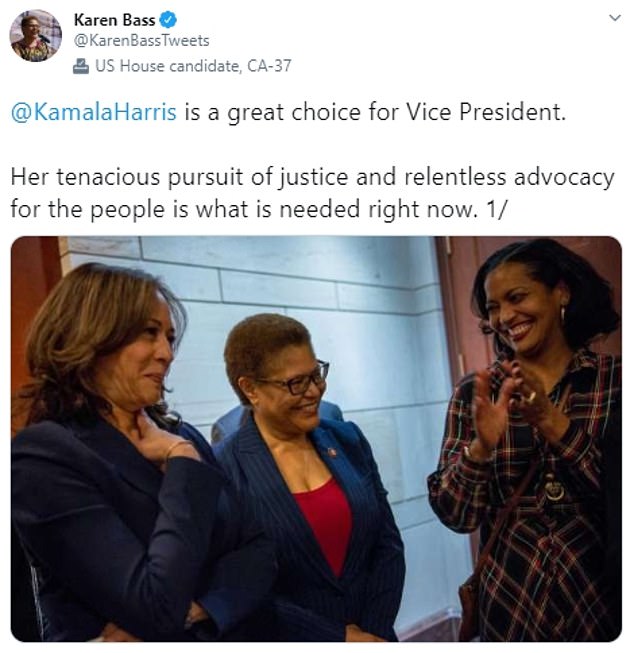 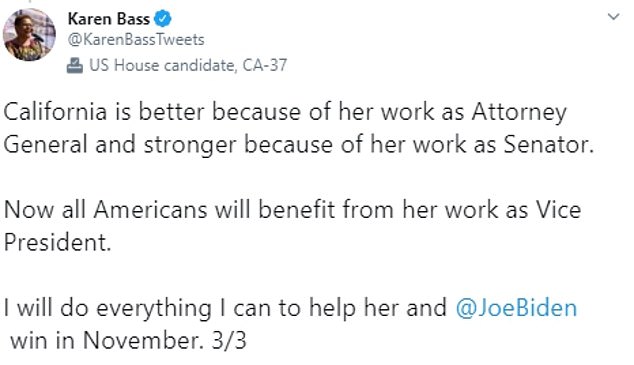 Rep. Jim Clyburn said he believed that the final three that Biden was down to earlier this week were Sen. Kamala Harris, Rep. Karen Bass, who called Harris a ‘great choice,’ and former Amb. Susan Rice

Susan Rice, the former ambassador to the United Nations and President Obama’s national security adviser, congratulated Sen. Kamala Harris on Twitter Tuesday. She was widely viewed as a finalist for the vice presidential spot 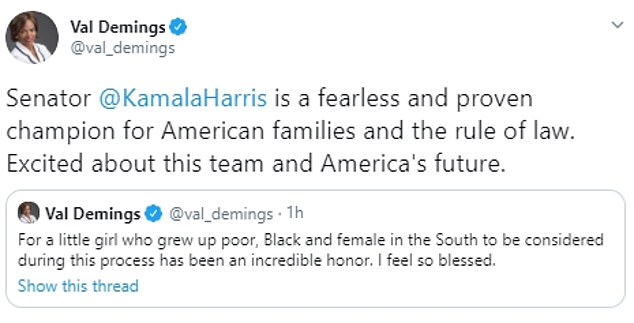 ‘Kamala Harris will be a great partner to Joe Biden in making our government a powerful force for good in the fight for social, racial, and economic justice,’ tweeted Sen. Elizabeth Warren who, like Harris, competed against Biden in the 2020 Democratic primary.

She was also considered for VP.

‘Senator Kamala Harris is a fearless and proven champion for American families and the rule of law. Excited about this team and America’s future,’ tweeted Rep. Val Demings, another woman the Biden campaign was reportedly vetting for the job.

She later added a tweet about being included in the veepstakes.

‘For a little girl who grew up poor, Black and female in the South to be considered during this process has been an incredible honor. I feel so blessed,’ Demings wrote.

Rep. Karen Bass, a California lawmaker and another woman under consideration, called Harris a ‘great choice’ for vice president.

Susan Rice, another top contender, shared her ‘warmest congratulations’ to Harris on Twitter and described her as a ‘tenacious and trail-blazing leader.’

‘I am confident Biden-Harris will prove to be a winning ticket,’ Rice said. ‘I will do my utmost to help them win and govern.’

Clyburn shared with reporters that he had a hunch that Biden had winnowed the pool down to Harris, Bass and Rice, while he said he previously believed Demings, the former Orlando police chief, ‘had the inside track.’

All the top candidates are black, though Harris respresents Asian-Americans as well, as her late mother was an Indian immigrant.

‘But in the last two or three days I had come to the conclusion that it was Harris, Bass and Rice. No one told me that, this is what I felt,’ Clyburn said.

And then, several hours before the pick was made public, Biden gave Clyburn a call and shared that the decision had been made and he was choosing Harris, a California senator who sits on the powerful Senate Judiciary Committee.

Clyburn said he had been a ‘little bit concerned’ that he might spill Biden’s secret to his three daughters.

‘And hopefully they’ll forgive me for not letting the cat out of the bag because he called me this morning and I did not share the news with any of them,’ Clyburn said.

Clyburn said he didn’t put his thumb on the scale once a shortlist developed.

‘I did not recommend any one to him. I told him what I felt about each one that he asked me about,’ the South Carolina congressman said, complimenting some of the other picks on Biden’s list who were Asian, LatinX, African-American and white.

He did reveal, however, that he talked to Biden a lot about the selection.

Clyburn’s endorsement before the February 29 South Carolina primary changed Biden’s fortunes after he performed badly in the Iowa caucuses and the New Hampshire primary.

Things had started turning around for the former vice president a week before when he came in a distant second to Bernie Sanders in the Nevada caucuses.

With his overwhelming comeback in the southern state, which is the first test of a candidate’s strength among black Democratic voters, Biden went on to best Sanders on Super Tuesday.

He also attracted the support of most moderates in the party including Sen. Amy Klobuchar, former South Bend Mayor Pete Buttigieg and ex-Texas Rep. Beto O’Rourke.

Some Democrats have feared that her record as a prosecutor would come back to haunt her, particularly as Biden potentially looked for a woman of color to be his running mate in the aftermath of George Floyd’s Memorial Day death that inspired the global Black Lives Matter protests.

Clyburn said Tuesday that he didn’t think that was fair.

‘How can we ask to have police chiefs of color, prosecutors of color and then hold it against them once they get into the position?’ Clyburn asked. ‘That is foolhardy. We want people in every profession.’

‘Val was a good police chief and I believe Kamala was a good prosecutor,’ he added, referencing Demings as well as Harris.

Demings’ police chief past was also worrisome to some in the party, as Democrats strive to grab onto the momentum of those Black Lives Matter protests.

Harris was also portrayed as being too ambitious to put on the ticket.

Clyburn knocked down this sentiment as well.

He called questions about Harris’ loyalty to Biden ‘problematic’ and suggested they were sexist.

‘And I seem to remember that Biden said some things in the campaign that the media ran with and thought was problematic. Obama got beyond that,’ Clyburn continued. ‘And Biden demonstrated he can get beyond that as well.’