Chief Constable of Thames Valley Police Sara Thornton poses with her CBE, which she received from Queen Elizabeth II for her services to the police force, in 2011

Police chiefs are being forced to make ‘difficult and unpalatable’ decisions over how to best protect the public as budgets shrink, a top officer warned last night.

Every force must ‘make choices about what we prioritise’ in the face of soaring demand, Sara Thornton said.

The former Thames Valley chief, who now represents all chief officers, called for everyday policing not to be forgotten as cash is ploughed into counter-terrorism. She warned that police risk losing touch with the public because there are fewer officers on neighbourhood beats.

In an open rebuke to Government claims that policing remains well resourced, Mrs Thornton said the extra pressure is ‘not sustainable’ and called for an ‘open-minded dialogue’.

‘Withdrawal from communities risks undermining their trust in us, at a time when we need people to have the confidence to share information with us,’ she said.

‘Police chiefs will do all they can to protect the public from terrorism. We will make choices about what we prioritise and where we invest.

‘Some of these choices may be difficult and unpalatable to the public but we can make them if necessary.’

Her comments, as chairman of the National Police Chiefs’ Council, are part of increasing warnings that police risk withdrawing from the streets.

Chief officers say they must prioritise urgent threats above ‘nice to do’ activities such as patrolling the streets and visiting victims of crime. They warn that victims may not see an officer – unless they are in danger or vulnerable – if there are no clues to follow up.

The Home Office remains unhappy that forces are sitting on £1.8billion of reserves and suspects further efficiency savings could still be made.

Home Secretary Amber Rudd has ordered a nationwide review of demands on police to see where forces are most under pressure.

Earlier this week Avon and Somerset Chief Constable Andy Marsh warned some crime victims will see a ‘lighter approach’ and it is inevitable that many ‘high-volume crimes’ will be barely investigated as police focus on those in danger. Northumbria’s chief has said the force is ‘very close’ to no longer being able to provide a ‘professional service’. 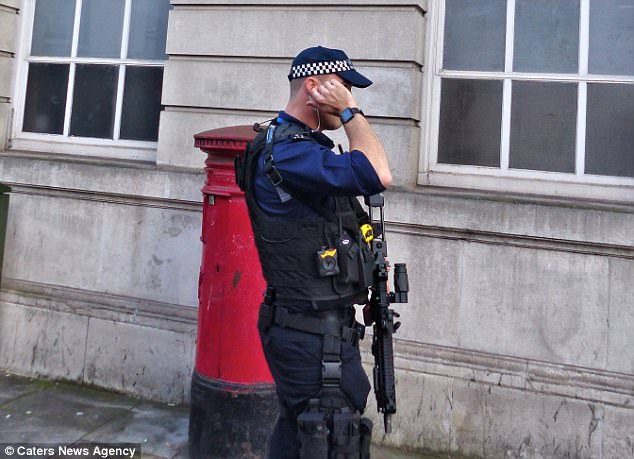 More and more cash is being ploughed into counter-terrorism (pictured: CT officer search a disused building opposite Fulham Broadway station not far from Parsons Green after receiving a tip-off about last week’s attack)

And the Police Superintendents’ Association warned of a ‘perfect storm’ of surging crime, staff shortages and dwindling budgets.

In her open letter, Chief Constable Thornton said although there is a large counter-terrorism budget, this work does not take place ‘in isolation’.

She said many of the resources responding to attacks this year came from the ranks of ordinary officers. ‘With officer numbers at 1985 levels, crime up 10 per cent in the last year and police work becoming ever more complex, this additional pressure is not sustainable,’ she said.

‘An effective response to an attack is just one part of our counter-terrorism effort. And it will never be as good as preventing them in the first place.

‘We’re particularly concerned about the resilience of local neighbourhood policing. Fewer officers will cut off the intelligence that is so crucial to preventing attacks.’

A Home Office spokesman said it is ‘sensitive’ to the pressures facing forces and will do ‘whatever it takes to keep communities and our country safe’.