The top civil servant in Brussels and formerly Jean-Claude Juncker’s right-hand man Martin Selmayr will step down from the role next week, a European Commission spokeswoman announced today.

The sudden promotion of Mr Selmayr to the role of Secretary-General last year angered many in the EU and earned a rebuke from the European Ombudsman.

The frank-speaking German lawyer had been Mr Juncker, the president of the European Commission’s, chief aide before he was promoted in an abrupt two-step process.

His departure from the European Commission will be viewed as a win by Brexiteers because of his oversight of the EU’s No Deal planning efforts and accusations that he wanted to ‘punish’ Britain for leaving the bloc.

European Commission’s top civil servant Martin Selmayr, whose sudden promotion to that post last year angered EU lawmakers and earned a rebuke from the European Ombudsman, will step down next week, a Commission spokeswoman said on Tuesday

Mr Selmayr’s compatriot Ursula von der Leyen is bidding today to secure the backing of MPs to replace Mr Juncker as the boss of the EU.

But according to an unwritten EU convention, the bloc’s top civil servant, who runs a 30,000-strong administration in Brussels, should not be of the same nationality as the president of the European Commission.

Asked if Mr Selmayr, 48, was quitting his post, Commission spokeswoman Mina Andreeva said ‘yes’ in a text message but she did not elaborate.

It is thought Mr Selmayr could leave his position as soon as next week.

The decision made by the Commission last year to first appoint Mr Selmayr as deputy secretary-general and then promote him minutes later when the serving secretary-general suddenly retired was criticised as ‘coup-like’ by European Parliament deputies.

Who is Martin Selmayr and why is he called ‘the Monster’?

Martin Selmayr developed a fearsome reputation in Brussels when he served as Jean-Claude Juncker’s chief of staff despite remaining relatively unknown to the public.

But his brutal style of ruling – demanding that access to Mr Juncker for even the most senior EU officials was first channeled through him – has also led to a queue of enemies.

His promotion to the top civil servant job in the EU also sparked outcry amid suggestions the process was not transparent.

His style led to a variety of nicknames from colleagues, including ‘Darth Vader’ and ‘Rasputin’.

But it was the moniker of ‘the Monster’ which stuck in reference to his formidable work ethic.

British officials accused Mr Selmayr, who has privately expressed his dislike of Brexit, of ‘hating’ the UK while also describing him as a ‘psychopath’.

Mr Selmayr, whose combative style as Mr Juncker’s chief of staff divided opinion, did not immediately respond to a request for comment.

The European Commission was savaged in September 2018 for apparently breaking rules in allowing the appointment of Mr Selmayr to the civil service post.

Mr Selmayr, who has the nickname ‘the Monster’, was suddenly elevated to the senior role in February last year in a move which immediately sparked a flurry of criticism.

The EU watchdog criticised the way in which the promotion was handled, with critics of Mr Selmayr and Mr Juncker even demanding the latter resign over the matter.

Tory MP Michael Fabricant told MailOnline at the time: ‘The selection of Herr Selmayr was always going to be controversial and Juncker decided to ride roughshod over his own EU rules.

‘He should resign, but he won’t. Perhaps now it is time for the EU Council to say ‘Enough’s enough’.’

Ms O’ Reilly said in her report that the Commission had committed four counts of maladministration.

She said: ‘The maladministration arose due to the Commission not following the relevant rules correctly either in letter or in spirit.

‘The Commission created an artificial sense of urgency to fill the post of Secretary-General in order to justify not publishing a vacancy notice.

Mr Juncker and a number of key EU member states stood by Mr Selmayr who was able to survive the row. 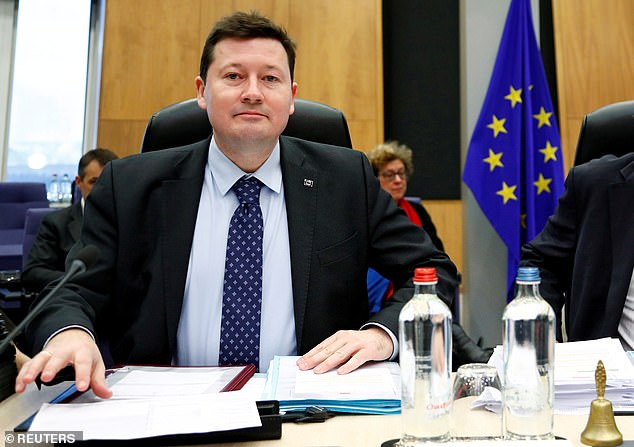 Mr Selmayr, dubbed ‘the Monster’ because of his formidable work ethic, is expected to leave his role in the coming weeks

He won his nickname as ‘the Monster’ because of his reputation as being one of the hardest working people in Brussels.

He was never far from Mr Juncker at official events and was seemingly always on hand to offer advice, prompting some critics to suggest that he was the true power behind the president.

Mr Selmayr has been something of a villain for Tory Eurosceptics during the Brexit process as they questioned how much influence he had over negotiations.

British officials had previously accused him of wanting to ‘punish’ Britain for voting to leave the EU in 2016.

But Mr Selmayr has always rejected such accusations, describing them as ‘false’ and a ‘story that some want to hear, but it is still false’.