The mother of a six-year-old boy left with brain damage after a treatable eye cancer spread to his brain is suing a Miami hospital, accusing a top doctor of failing to act sooner.

It is the third lawsuit brought against the esteemed eye cancer specialist Dr Timothy Murray of Nicklaus Children’s, after the deaths of two other Miami children who contracted retinoblastoma and died in his care.

Jayden Alvarenga was diagnosed in 2015 with the rare but treatable disease, which has a 1 percent risk of spreading and a 95 percent survival rate.

However, despite undergoing grueling chemotherapy, radiation therapy, and removal of his right eye, Jayden was diagnosed a year later with cancer in his brain and bone marrow.

While he is expected to survive, doctors say he will likely have permanent brain damage and limited growth.

In a lawsuit filed against Nicklaus Children’s, his 23-year-old mother Yesenia Alvarenga accuses Dr Murray of negligence for recommending chemotherapy before removal of the eye, which she believes allowed the cancer to spread. 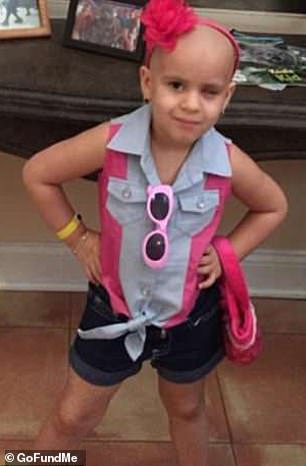 Damian Creed (left) and Salette Ruiz (right) died the same week in November 2016, aged four and five, after their retinoblastoma, a rare but treatable eye cancer, spread to their brains. Their families are suing Dr Timothy Murray, their doctor, accusing him of negligence for electing to wait instead of removing the affected eye immediately

‘We put our trust in these doctors and they used our kids like guinea pigs,’ Alvarenga told the Miami Herald.

Dr Murray, who has been treating retinoblastoma for nearly 30 years, maintains that it is now an outdated practice to remove a child’s eye before any other treatment.

The eye cancer, which affects 200 to 300 a year, is aggressive, but rarely ends in metastasis or death.

Alvarenga was inclined to take his view when she turned to him for a second opinion.

When Jayden was first diagnosed, a doctor at the University of Miami’s Bascom Palmer Eye Institute said his eye would have to be removed.

It was a relief for Alvarenga when she turned to Dr Murray, a leading figure in retinoblastoma care, and he said they could avoid such a drastic measure.

They would start with chemotherapy and radiation therapy, and if necessary they would then remove the eye.

He endured 10 months of chemotherapy and radiation therapy before his eye was finally removed in late 2016. At that point, Dr Murray said they should be in the clear.

Months later, tests revealed the cancer had spread to his brain and his bone marrow.

He was immediately admitted for brain surgery, which took 12 hours.

When he came out, Alvarenga says, Jayden wept: ‘I don’t want to die, mom.’

‘I can’t get it out of my head,’ Alvarenga told the Herald.

‘He won’t grow much because of how much radiation he got, and he’ll probably develop late,’ Alvarenga told the Herald. ‘I am almost sure he is going to fail first grade. He’s always super tired. It’s all just draining him.’

Alvarenga says she may have chosen a different doctor had she known that, while Jayden was receiving chemotherapy with his eye still intact, two other children in Dr Murray’s care were succumbing to the same disease.

In November 2016, around the time Jayden’s eye was removed, four-year-old Damian Creed and five-year-old Salette Ruiz both died of complications from their eye cancer spreading.

Damian was diagnosed in 2014, and, according to his family’s lawsuit, Dr Murray said: ‘We open up a whole other can of worms when we remove a child’s eye so young.’

After six months of chemotherapy, he was given the all-clear. But in June 2015, his eye sweeled painfully, pushing itself out of its socket, and in July Dr Murray removed the eye.

After the surgery, Dr Murray declared Damian in remission once more.

But an MRI scan in September 2015 revealed the worst: the cancer had spread to his optic nerve, meaning it had infected his brain.

Eventually, in May 2016, the family tried their final option: a stem cell transplant, transplanting bone marrow from a donor into his immune system. The highly risky operation is hit-and-miss. It had worked wonders in some, rejuvenating their body to attack the virus. In others, the very operation has proved fatal, as the recipient’s immune system attacks the new cells. In others, it is simply futile.

Damian saw no change in his condition and began rapidly worsening. He died in November 2016, at the age of four, at Nicklaus.

Salette was referred to Dr Murray at the age of two in November 2013, and the doctor told her family it was the worst case of retinoblastoma he’d ever seen after treating 370 children.

However, Dr Murray advised against removing the eye.

Instead, he prescribed five rounds of intra-retinal chemotherapy, insisting after each one he saw promise; that the eye was ‘dead’ but stable.

eventually her eyes and arteries could not handle any more of it, so she was put on a general course of chemotherapy for most of 2014.

In early 2015, her eye swelled up. Dr Murray, Mr Ruiz said, concluded that the eye was ‘dead’ and needed to be removed.

Ruiz said he was baffled by the diagnosis, and why it hadn’t happened after her first visit.

‘If he sees her Friday [for the first time] and Monday we’re removing her eye, Salette would not be dead and we wouldn’t be here,’ Mr Ruiz told the Herald.

‘But he started to invent things, doing chemotherapy, radiation, and that opens a path for the cancerous cells to spread. If it’s the most aggressive you’ve ever seen, then remove the eye.’

After the operation, in May 2015, Dr Murray came into the waiting room to Salette’s parents, informing them that the cancer had spread into the optic nerve.

It meant the disease would be incredibly difficult to contain, treat and even cure.

In the first week of November 2016, scans revealed the cancer had spread to her right optic nerve and spine.

Her condition rapidly deteriorated, and she was put on life support. Days later, she was declared brain dead.

Both families are demanding unspecified damages for the deaths of their children, which they claim could have been prevented.

Supporting their case, they have an independent review conducted by an anonymous peer doctor at Nicklaus.

According to the Herald, the review found Dr Murray made clinical errors in both cases.

They found Damian’s case was ‘risky’ because the scans Dr Murray took did not clearly capture everything, meaning he ventured into guess work.

‘Allowing a child to progress from treated intraocular retinoblastoma to ocular tumor recurrence and then subsequently optic nerve extension and even central nervous system extension (while under observation) is not considered to be within the standard of care at a modern medical center,’ the report states, according to the Herald.