A senior official at the State Department has resigned in protest at President Donald Trump’s handling of the protests that sprung up after George Floyd was killed by a white cop.

Mary Elizabeth Taylor, 30, the assistant secretary of state for legislative affairs, submitted her resignation on Thursday.

Taylor, the youngest assistant secretary of state for legislative affairs in history and the first black woman to serve in that post, said that the president’s actions ‘cut sharply against my core values and convictions.’

Taylor, a registered Republican who formerly worked for Mitch McConnell, the Senate majority leader, said she felt she had no choice but to resign.

‘Moments of upheaval can change you, shift the trajectory of your life, and mold your character,’ she wrote in her resignation letter, obtained by The Washington Post.

‘The President’s comments and actions surrounding racial injustice and Black Americans cut sharply against my core values and convictions.

‘I must follow the dictates of my conscience and resign as Assistant Secretary of State for Legislative Affairs.’

Her departure is the first high-profile resignation made in protest at the president’s actions since Floyd’s killing that has been made public.

One member of the Defense Science Board, James Miller, resigned shortly after Trump’s controversial photo op in Lafayette Square – but he was a former Obama administration official who had served on the committee that advises the Pentagon on science issues since 2014.

Taylor began working at the State Department in October 2018. 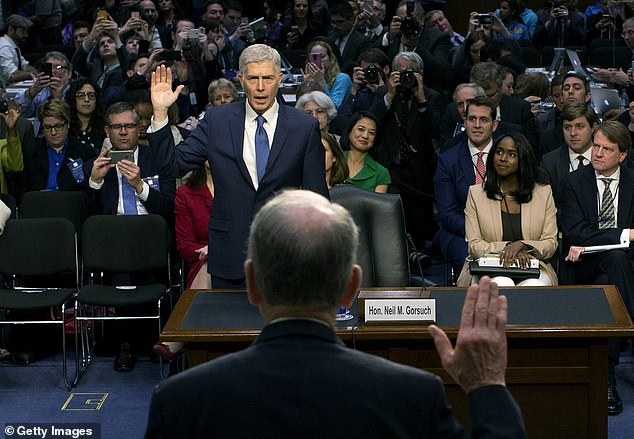 She served as the White House’s deputy director for nominations before joining the State Department.

In her White House role, she helped secure more than 400 presidential appointments through the Senate, including those of Neil Gorsuch, now a Supreme Court Justice; CIA director Gina Haspel; Federal Reserve Chair Jerome Powell and her former boss, Mike Pompeo.

Taylor comes from a family with a history of public service.

Her mother, Kristin Clark Taylor, served as the White House’s director of media relations under President George H.W. Bush and was the first black woman to hold that job.

The White House and State Department are yet to comment on her departure, but McConnell thanked her for her service.

‘Leader McConnell appreciates Mary Elizabeth’s service to the Republican Conference and our nation,’ said David Popp, a spokesman for McConnell. 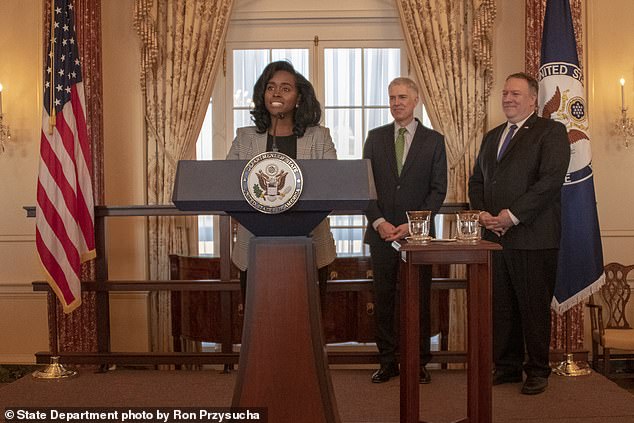 Taylor speaks at her swearing-in ceremony in October 2018, watched by Pompeo and Gorsuch 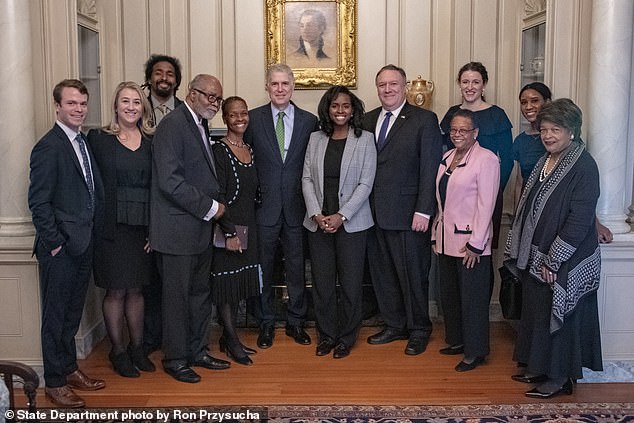 Trump’s handling of the protests that surged across the U.S. in the aftermath of George Floyd’s May 25 killing have been strongly criticized by his opponents.

He positioned himself as a ‘law and order’ president, and urged the sending in of troops to quell protests, tweeting: ‘When the shooting starts, the looting starts’ – a highly controversial phrase from the 1960s.

On June 1, peaceful protesters were driven from Lafayette Square, in front of the White House, with riot police, flash bangs and tear gas to clear the way for Trump to pose with a Bible at a nearby church.

‘Get tough police!” Trump tweeted on June 3, and then two days later took to the Rose Garden to trumpet positive job numbers and claim that Floyd was looking down approvingly on the nation.

Trump threatened to use the military across the country to achieve ‘total domination,’ branding protesters as ‘thugs,’ even ‘terrorists.’

Trump’s former defense secretary, James Mattis, slammed the threat in scathing remarks, saying: ‘We must reject any thinking of our cities as a “battlespace” that our uniformed military is called upon to “dominate.”

‘Militarizing our response, as we witnessed in Washington, D.C., sets up a conflict – a false conflict – between the military and civilian society.’

An ABC/Ipsos poll on June 5 found that 66 per cent of Americans disapproved of Trump’s handling of the protests.

He has also been roundly condemned for organizing a rally in Tulsa, Oklahoma – site of the worst massacre in U.S. history of African Americans – on Juneteenth, the June 19 day commemorated as the true end of slavery.