Topless Irish Taoiseach Leo Varadkar is caught having a picnic

The shirtless Taoiseach was filmed outdoors with his partner Matt Barrett and two others near Steward’s Lodge where he has been staying during the pandemic.

Some viewers suggested that the two-metre (6ft) safety distance was not being observed, but Mr Varadkar’s office insists he followed lockdown rules.

The footage of the Irish premier has emerged just as his UK counterpart Boris Johnson is engulfed in a row over his adviser Dominic Cummings and his alleged breaches of lockdown rules.

Irish lockdown rules also ban trips more than 5km from home, and Mr Vradakar was accused of traveling from his personal Dublin flat which was 7km from the park.

But the premier is staying in the official residence of the Taoiseach which is within 5km of the park. Ireland’s current rules were eased in 18 May and also allow gathering in groups of four as long as they stay 2m apart.

A total of 1,608 people have died from coronavirus in Ireland and 24,639 cases have been recorded.

The footage shared on social media shows Mr Varadkar holding a cup and standing close to his partner Mr Barrett, who lives with the Taoiseach.

One of Mr Varadkar’s friends is standing opposite him, while another is crouching on the grass.

From the pictures it is impossible to tell whether or not Mr Varadkar’s friends are more than two metres (6ft) away.

Mr Varadkar has said that social distancing rules remain in force even as Ireland begins to ease the lockdown.

Senior government official Liz Canavan last week urged people not to have picnics or stay outdoors longer than necessary if they are exercising.

‘If you’re visiting a public amenity, try not to stay too long at the site or have picnics. Please do your exercise and then go home,’ she said.

Mr Varadkar’s office told Irish media that he had been in the park with Mr Barrett and two friends ‘in line with public health guidance’.

The Taoiseach was within the legal limit of five kilometres (three miles) from his residence, his office said.

Mr Varadkar ‘has been in Stewards Lodge during the last few weeks as it has secure office and video conferencing facilities’ allowing him to work there, a statement said.

Like his predecessors, Mr Varadkar pays a nightly fee to use the facility, his office added. MailOnline has contacted his office for comment.

On Sunday, the coronavirus death toll in Ireland increased to 1,608 after a further four deaths were announced by the National Public Health Emergency Team. 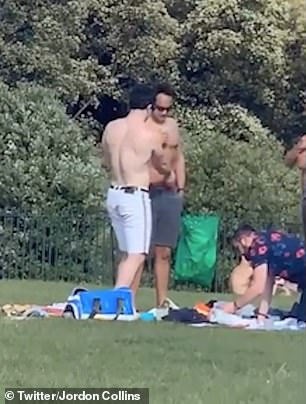 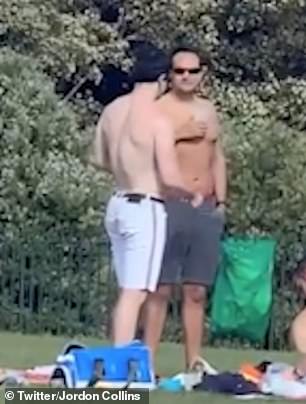 The pictures of Mr Varadkar emerged in the midst of a huge controversy in London where Boris Johnson is fighting to save his top aide Dominic Cummings.

Mr Cummings and his family drove more than 250 miles to stay in a different home in Durham after his wife developed coronavirus symptoms.

The PM has insisted that Mr Cummings did not break lockdown rules, but some Tory MPs have broken ranks and called for his resignation.

Mr Cummings is giving a press conference this afternoon with the story still raging in Westminster.

In Ireland, Ms Canavan said current advice from the Irish officials and the European Centre for Disease Prevention and Control is that people should observe a 6ft safety distance.

‘That remains the public health advice from the Government and similar is in place in countries around the world,’ Ms Canavan added.

‘Any changes to the current restrictive social distancing measure must be slow and incremental. This approach is essential, as going too far too fast could result in a sudden surge in infections.

‘We need to know how we are getting on phase by phase. That’s why they are separated by three weeks so we can assess the impact of the virus on each set of measures.

‘The approach to reducing measures will evolve as more information becomes available and in line with international learning and experience, in particular from countries ahead of Ireland in terms of their outbreak.’ 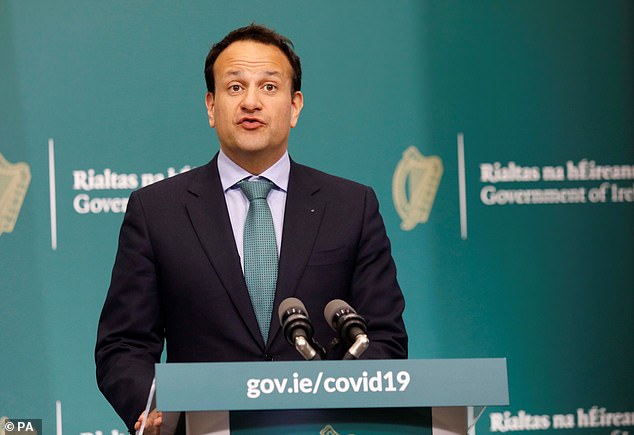 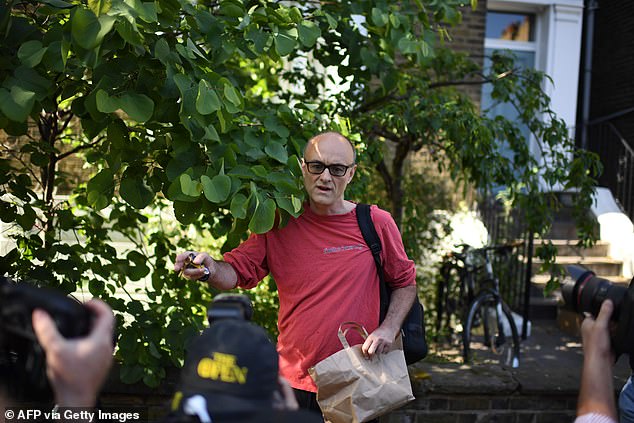 Health minister Simon Harris said today that the public should not ‘get sloppy’ and must continue to follow public health advice.

Ireland is entering the second week in easing its lockdown laws which saw the reopening of a number of retail stores and some sporting activities.

He also told RTE 2FM breakfast show that the 6ft safety distance is being kept under review.

The head of the Health Service Executive said that reducing the distance to one metre (3ft) would give health officials ‘significant extra capacity’ to manage patients.

Paul Reid said the current expert advice of maintaining a 6ft distance has created ‘significant implications’ for capacity across the country’s health facilities.

Mr Reid said: ‘Obviously the NHPET guidance and government guidance is two metres and that’s what we are planning in terms of framework for new services to work through.

‘That does have significant implications for us in terms of emergency departments, patients’ waiting rooms, so two metres will reduce the volume that we could have attending at a particular time.

‘But we have to work off what the current guidance is – there is no doubt one metre would give us significant extra capacity in terms of managing our ill patients.’

HSE chef clinical officer Dr Colm Henry said that some advice has changed as experts gain a better understanding of how the virus works.

He added: ‘It was only through the measures that were brought in on March 27, which were quite stringent but included social distancing of two metres, that we were able to not just bend the curve but but really reduce it down to where it is now.

‘We see many countries including the United States and the UK including a distance of two metres bearing in mind that it’s a droplet-spread illness.

‘It’s based on the projected length a droplet can spread. Initially we thought this was through coughing and sneezing, but as we get a greater understanding of this virus we are more aware of how it can spread in less obvious situations and indeed and how it can spread from people who are asymptotic or pre-symptomatic.’