Asos is poised to relaunch Topshop on its website tomorrow after rescuing the brand just three weeks ago.

The online giant swooped on the fashion business in a £295million deal earlier this month. Administrators to its collapsed parent group Arcadia have since closed down the Topshop website and its shops.

The relaunch will be exclusive to the Asos website and the company hopes continued demand for the brand will attract large numbers of shoppers.

Last night, the website was running a banner on its home page that read: ‘Topshop is now a part of Asos. Stay tuned, the full collection is coming soon.’

It urged shoppers ahead of the big relaunch to ‘discover the iconic British brand’s clothes, shoes and accessories collections (and yes, that does include the much-loved denim range).

‘Topshop’s Jamie, Joni and Leigh skinny jeans are an absolute staple, while straight-leg cuts and mom jeans will take your denim collection to the next level.

‘Elsewhere, expect layered necklaces, retro sunglasses and cross-body bags to give your wardrobe that extra something-something.’

Topshop was a £1billion brand at its peak and Asos chief executive Nick Beighton is banking on the label’s resilience and continued loyalty from its army of shoppers.

Hundreds of Topshop products had already flooded on to the website last night in preparation for the relaunch.

The company is also preparing to relaunch Topshop sister brand Miss Selfridge. The timing of the Topman relaunch – another brand acquired by Asos in the deal – is not yet clear.

Asos paid £265million for the brands and £30million for stock. It also put aside an additional £30 million to account for any outstanding liabilities and creditor orders. 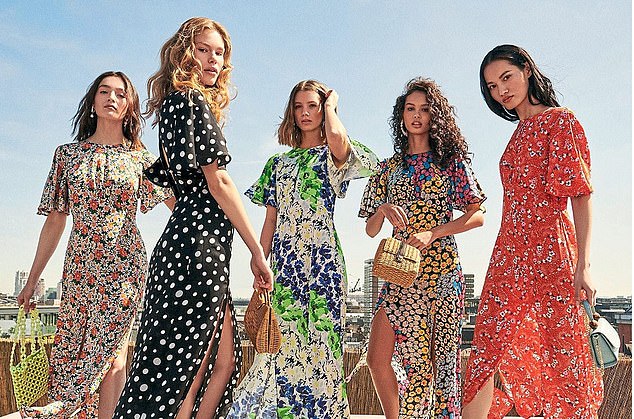 The company is understood to be keen to do a deal within the next week to ensure that jobs at the warehouse are secured.

Retail sources told The Mail on Sunday that Boohoo could create another 1,000 jobs as part of the agreement to acquire the Northamptonshire site.

Boohoo, which already operates three warehouses, has been on an acquisition spree after acquiring the rights to high street names including Coast, Karen Millen, Oasis and Warehouse.

In January it bought the Debenhams brand and website for £55million and two weeks later bought former Arcadia Group brands Dorothy Perkins, Wallis and Burton. It declined to comment when contacted.

Arcadia administrators at Deloitte also declined to comment. Asos plans to operate its new brands from its existing warehouses and has already said it is not interested in the Daventry site.