Sir Philip Green routinely bullied a personal assistant during foul-mouthed tirades in which he called her a ‘fat c***’, she claimed yesterday.

The Arcadia’s boss’s alleged outbursts left Samantha Watson on the verge of tears as he viciously insulted her over trivial issues.

Revealing the scale of his alleged abuse, she said: ‘He is probably the worst person I have ever met, and was just so rude and obnoxious.’

The bullying is said to have occurred when Miss Watson, 42, worked as a PA for media magnate Richard Desmond.

She spoke to the Topshop boss on an almost daily basis during his frequent phone calls to his ‘best friend’, as well as on his twice-weekly visits to Mr Desmond’s office.

Miss Watson said: ‘He would phone in and if I was even a millisecond late in transferring the call he would call me every name under the sun.’

She was left horrified when on one occasion she said the businessman became agitated and called her a ‘fat, Geordie c***’.

She has previously described the irony in Sir Philip’s vile comments by pointing to his rotund physique in comparison to her own slender frame.

‘He was a greasy little squirt with his big belly sticking through his shirt buttons,’ she said. 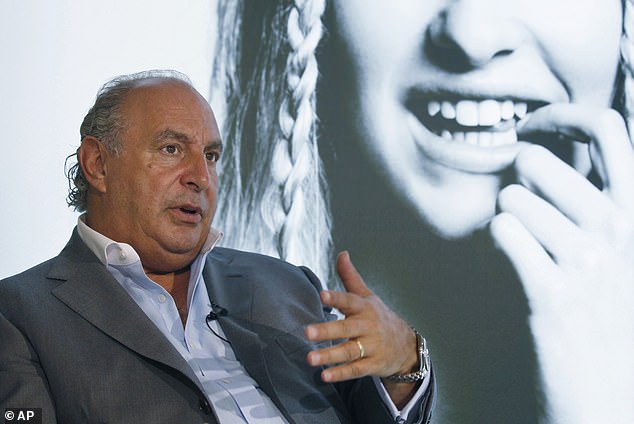 ‘To call a woman ‘fat’ he must have known was designed to intimidate and hurt, something most girls are sensitive about.’ After 16 years working for media organisations in London, she returned to Northumberland and is currently working for her father’s car dealership company.

Recalling her dealings with Sir Philip during her six-month stint working for Mr Desmond a decade ago, she said: ‘I felt he wanted to leave me in tears. He would have loved that. I wish I’d stood up to him.

‘Every time I came into contact with him he was a totally horrible bully who loved to make you feel small.

‘If I kept him waiting when he visited Richard’s office and I had to travel down to get him on the elevator, even if just for a couple of minutes, he would say, ‘Where the f*** have you been?’

‘He just loved saying the C-word and bullying women. He was so short-tempered. He was just a pig. Philip Green knew that nobody would answer back and I wish I had at the time.’

Last night, Sir Philip’s parent company, Arcadia, did not respond to requests for comment over the allegations.

The businessman has previously objected to the claims made by Miss Watson and denied that he was a ‘bully’. His friends have pointed to the fact that his two long-standing PAs have been with him for 18 years and 24 years respectively as proof that he treats his staff well.