And now Tori Spelling is hoping to graduate to The Real Housewives Of Beverly Hills, she shared on Bethenny Frankel’s iHeartRadio podcast ReWives.

This comes after the 49-year-old blonde beauty shared in 2019 that she had never been asked to be on the show and felt she was not a fit because she was ‘too nice.’

Hire me: She already stared on the hit series Beverly Hills, 980210 in the 1990s. And now Tori Spelling is hoping to graduate to The Real Housewives Of Beverly Hills, she shared on Bethenny Frankel’s iHeartRadio Podcast ReWives; seen on December 9

Bethenny welcomed Spelling as she asked her about wanting to be a Housewife.

Spelling began by saying that she is a big fan of Housewives. ‘I am an OG fan,’ she said.

As far as her working on RHOBH Spelling said: ‘I have never gotten to talk to someone about this with someone who knows the show well.’

Tori said they have never asked her to be on RHOBH and that hurts.

‘They never called my agent,’ said the star. ‘And I went ballistic when my friend Jennie Garth was asked to do the show. But they never asked me. I am on Watch What Happens Live and I ask Andy about it and he said, “It doesn’t make sense, I don’t see you for the show, I don’t make the connection.”‘

Cohen then said Spelling was not friends with anyone on the show so it would not be a fit, but she told him she was friends with ‘every single person on the show.’ And he said he still didn’t see it, she shared. 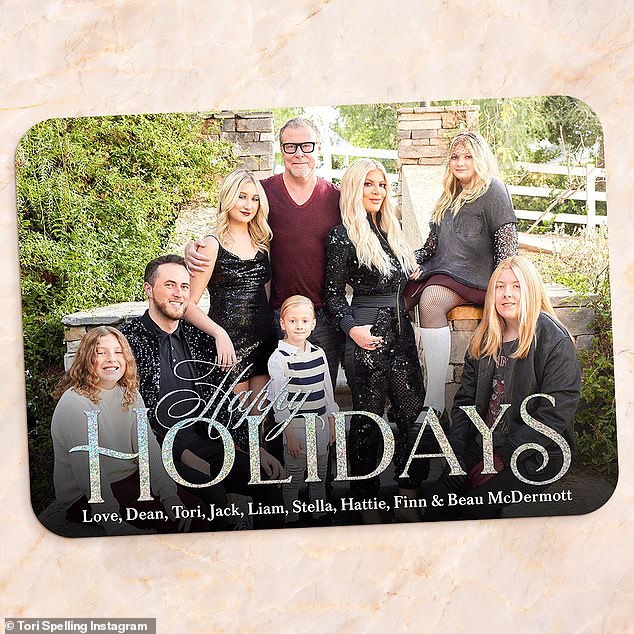 She has the brood: Spelling is married to Dean McDermott and has five kids and a stepson

‘I could never do that,’ she told People before adding the disclaimer, ‘I love to watch it and I’m friends with them, I’m just like nope, I just wanna watch it on TV.’

You could argue that Spelling’s very public fandom of the hit reality show over the years has helped fuel the rumors of her joining the cast.

‘It’s one of my favorite shows, but not to be on, just to watch,’ she explained in the interview.

‘As a viewer like everyone else,’ the mother of five added before admitting that she ‘would get eaten alive’ on RHOBH.

‘I am too nice and a people pleaser to get in those fights they get into.’ 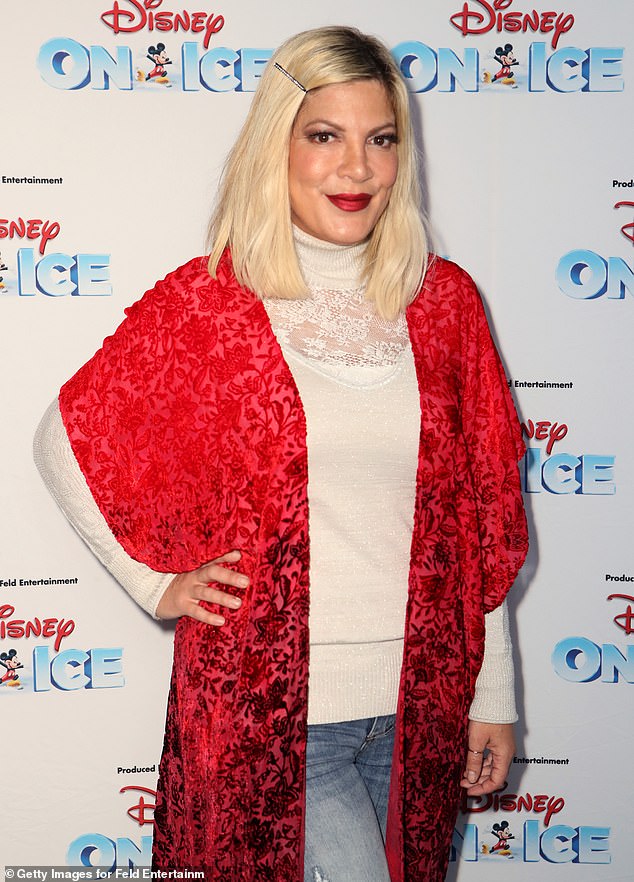 Her take: . This comes after Tori shared in 2019 that she had never been asked to be on the show and was not into it. Seen in 2019 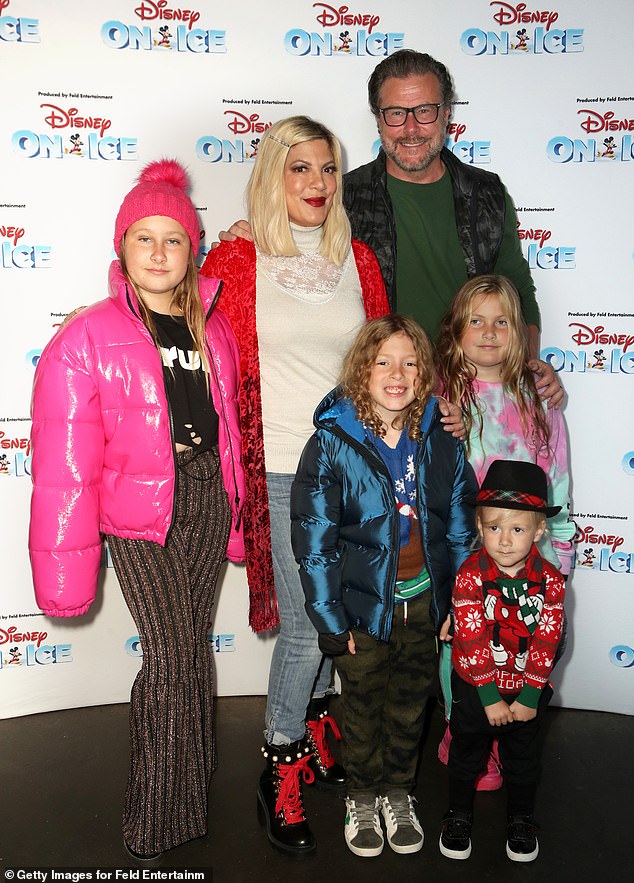 No way! Spelling revealed she could never join the cast of RHOBH, and that she would ‘get eaten alive’; she is pictured with husband Dean and four of their five children

In August 2019, during an interview with Jenny McCarthy, Spelling admitted she was a huge fan of RHOBH and that she had never been approached to do the show.

‘I was born in Beverly Hills, so I have one thing going for me,’ the actress and author explained.

‘I’m married with a lot of kids; drama follows me everywhere; they’ve never asked me.’

McCarthy quickly shot back. ‘I have a feeling you might get the shout-out now.’ 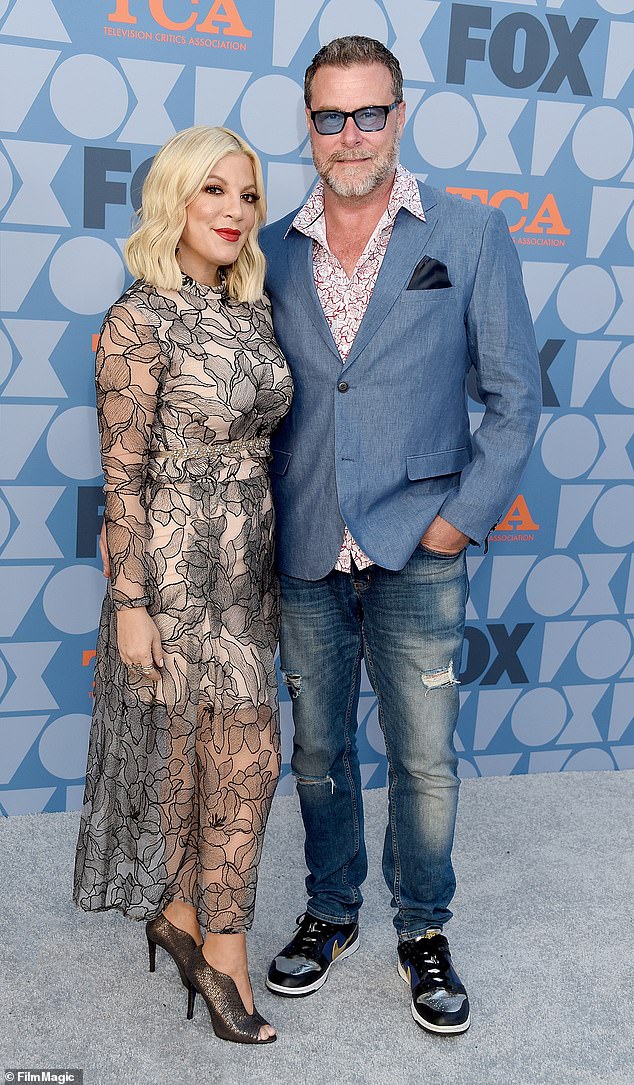 Going strong: Spelling and McDermott have been married for over 16 years; seen in 2019

Spelling and McDermott have been married for over 16 years.

They share five children together: sons Liam, Finn, and Beau, and daughters Stella, and Hattie.

The daughter of famed film and television Producer Aaron Spelling currently stars in BH 90210, a reboot of sorts of the hit 1990s series Beverly Hills, 90210. 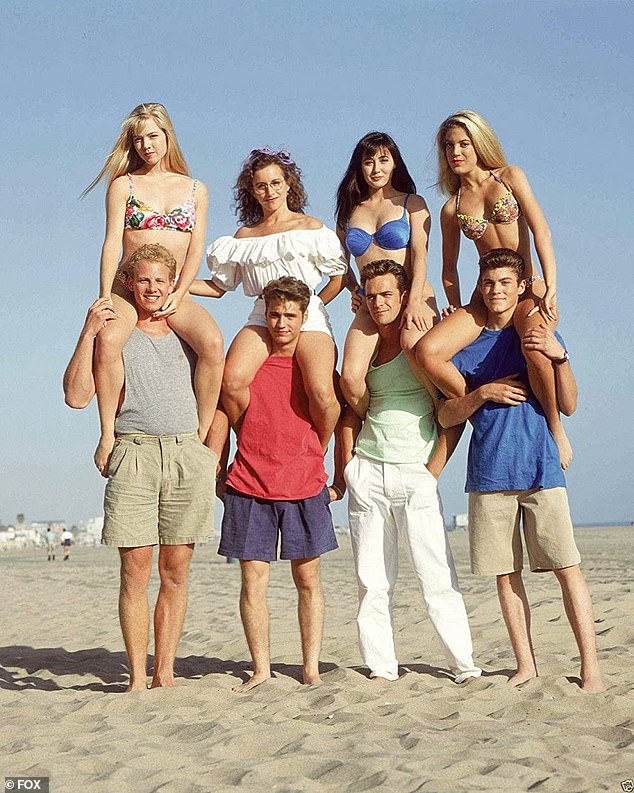 Her hit show: She is seen far right on Beverly Hills, 90210 with Jennie Garth, Shannen Doherty, Like Perry, Jason Priestly and others