Tories are the party of racism, a Windrush descendent told the Labour conference today as delegates in Liverpool heard a motion to scrap Theresa May’s hostile environment policy.

Cecile Wright, a delegate from Derby North, called the Windrush scandal a ‘crime against humanity’, as she backed the motion proposed by shadow home secretary Diane Abbott.

Ms Abbott said ‘false and toxic’ rhetoric about immigrants led directly to the scandal, which saw more than 60 British citizens wrongly deported decades after they arrived from the Caribbean on board the Empire Windrush in 1948.

She urged the conference to vote in favour of repealing the Immigration Act 2014, which aimed to make it as difficult as possible for unregistered migrants to stay in the UK, including by forcing landlords and charities to carry out ID checks.

The bill was put forward when Mrs May was home secretary and backed by Labour.

‘Can you imagine living in a country which indefinitely detains its own citizens? Which deports them?’ Ms Abbott asked.

‘Which refuses them cancer treatment even when they’ve lived in the country all of their adult lives? Well, under this government we saw this happen to the Windrush generation.’

Speaking in favour, Ms Wright described herself as a daughter of Windrush and claimed the scandal was emblematic of racist attitudes within the Tory party. 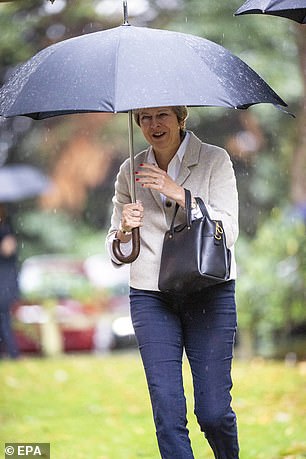 Ms Abbott spoke out against the 2014 Immigration Act, which was passed by Parliament when Theresa May was home secretary. She is seen attending church in Maidenhead on Sunday

She said: ‘Prominent Tories have for decades sought to remove, stigmatise or use racist name-calling ever since the Windrush generation arrived in this country in 1948.

‘Indeed, it was the Tory Enoch Powell who wanted us repatriated to avoid the rivers of blood.

‘It was the Tory Margaret Thatcher who told us the country was being swamped by immigrants.

‘It was the Tory Boris Johnson who has used the racist jibes of watermelon smiles and pickaninnies, and the Tory Theresa May who devised a hostile environment policy and removed as many black Caribbean people as possible to keep down the net migration figures.’

Ms Wright asked delegates to consider the common link between the figures, and told them: ‘The Tories are the party of racism.

‘Let us all in the Labour party unite against racism, for it is the Tories we need to oppose.’

John Campbell from Unison also spoke in favour, saying the Windrush generation had been ‘hounded’ by the Conservative government, which had left British citizens ‘destitute and homeless’.

He said: ‘Fascists and racists have been encouraged to commit greater acts of violence, openly embracing white supremacy.

‘We must bring the might of the Labour movement to bear against the hostile environment we face. This goes to the heart of our fight for social and economic justice.’