The outlay by the Conservatives was the highest ever – despite the campaign ending with the PM being humiliatingly stripped of her overall majority.

By contrast, Labour’s spending was just over £11million, and the Liberal Democrats spent nearly £6.8million.

The Electoral Commission watchdog has also announced that it is investigating both the Tories and Labour for submitting spending returns that were missing invoices and ‘potentially inaccurate’ statements about payments.

The Tories’ previous record spend was just below £18million in 2005, but in the campaign last year they hit £18.5million

The Conservatives and the Lib Dems are facing a separate probe for payments that were made later than the deadlines after the election.

Meanwhile, anti-Brexit campaign group Best for Britain is under investigation for submitting a return that was missing invoices and failing to hand back £25,000 received from an impermissible donor within 30 days.

The detailed spending returns show the Tories spent some £262,000 on private planes during the campaign.

Some £4million went to CTF Partners Limited, the firm of election guru Sir Lynton Crosby. More than £900 was spent by the party with Deliveroo.

The Lib Dems paid Disney Cruise Line more than £2,500 – apparently after a member of staff was forced to cancel a holiday due to the unexpected poll.

Bob Posner of the Electoral Commission said: ‘It is vital that voters are given an opportunity to see accurate and full reportable data on what parties and campaigners spent money on in order to influence them at last year’s general election.

‘This provides transparency in the political finance system and is open for anyone to scrutinise.

‘We are investigating possible breaches of the rules.

‘However, our on-going discussions with the major parties indicate to us that they may wish to consider the robustness of their internal governance and level of resourcing to ensure they can deliver what the law requires.’

What political groups are being investigated for their election spend?

The total spend of £40million by the major parties and political groups for the election last year was higher than in 2015.

The Tories’ previous record spend was just below £18million in 2005.

It shows that £13.4million – the equivalent of over a third of the total spend – was spent on unsolicited material like leaflets.

Theresa May called the snap General Election last spring while she was riding high in the polls and pundits were predicting she would win a landslide.

But her election campaign was widely seen as one of the worst ever – characterise by dull stump speeches made by Mrs May and with few other ministers allowed to actively campaign nationally.

Tory manifesto pledges to axe the triple lock on pensions, allow a free vote to bring back fox hunting, and a pledge to reintroduce grammar schools, all proved deeply unpopular with voters.

Meanwhile, Jeremy Corbyn’s manifesto – dubbed the most left-wing in a generations – promised to turn the spending taps on and pump many billions into public services. 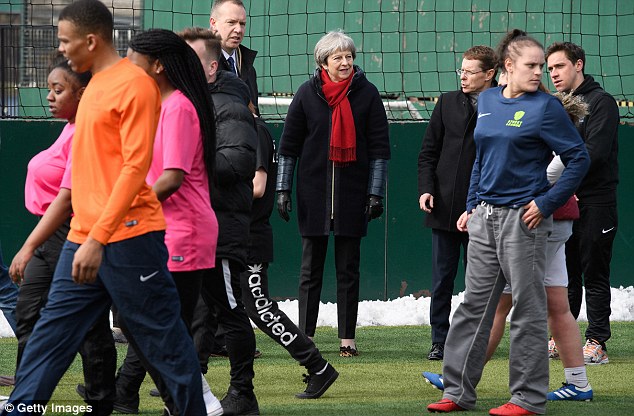 He also pledged to scrap university tuition fees in a promise which proved extremely popular with younger voters.

When Mrs May lost her majority in the shock election result, she spent several days clinging on to her leadership by a whisker – with Tory MPs openly calling for her to go.

She managed to stay on as Prime Minister only after getting rid of her two closest but highly controversial advisers – Nick Timothy and Fional Hill.

And she had to promise to pump an extra £1billion into Northern Ireland as part of a confidence and supply deal to get the DUP’s ten MPs to prop her up in Downing Street. Mrs May’s tenure of the Tory Party has been dogged by rumours she will face a leadership challenge by other Cabinet ministers.

But she has vowed to stay on as Tory leader and Prime Minister as long as the party wants her too.

And the Conservatives have struggled to find a candidate that would be able to unify Ramainers and Brexiteers.

Meanwhile, Mr Corbyn’s surprise strong performance in the election managed to silence his many critics in the Labour Party for a time.

But splits have reemerged in recent weeks as Labour moderates have torn into the left-wing leader over his lukewarm criticism of the Kremlin in the wake of the Salisbury spy poison outrage.

Former Russian spy Sergei Skripal andhis daughter Yulia are both fighting for their lives in hospital after being poisoned by the nerve agent Novichok.