Two states continue to have tornado watches in effect through the early morning hours of Sunday, out of nine that were issued such an alert on Saturday.

The latest update on the weather system that has impacted nine states bordering each other along the midwest, southwest and southeastern regions of the US has shown a tornado watch remains in effect for counties in Middle Tennessee and much of Kentucky.

‘The main threat will be damaging winds, localized flooding and the possibility of brief tornadoes,’ the weather center said of the remaining watch.

These tornado watches will persist until 3am Eastern, 2am Central, according to the National Weather Service.

Earlier in the night, in northeast Arkansas, an 83-year-old man was killed after high winds toppled a trailer home.

A tornado watch remains in effect through 3 am Eastern on Sunday for Middle Tennessee and Kentucky, down from 9 states bordering each other throughout the midwest, southwest and southeastern US regions which were under the alert at its peak on Saturday 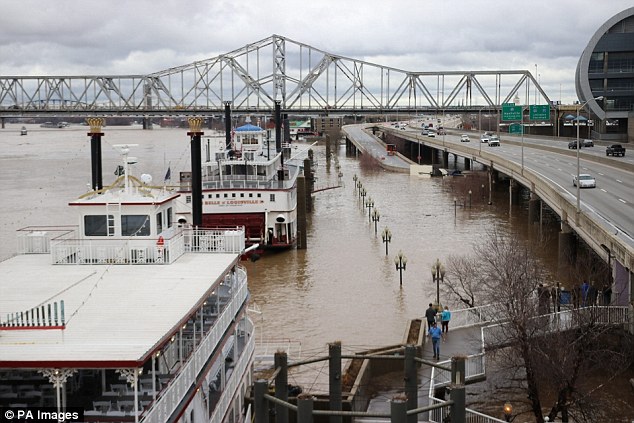 Earlier on Saturday, a watch that had already included four states was expanded to by five more.

The National Weather Service said the system was capable of producing wind gusts of up to 75 mph (120 kph) and hail up to 2 inches (5 centimeters) in diameter, or about the size of an egg. Heavy rain and flooding hit the areas listed.

About 50 miles away, the weather service said the roof was blown off a hotel in Osceola, which is located about 160 miles (257 kilometers) north of Memphis, Tennessee.

Missouri Gov. Eric Greitens signed an executive order earlier Saturday declaring a state of emergency ahead of the anticipated storms and flooding in parts of southern Missouri.

The order activated the resources of the Missouri National Guard and ensures state resources are available in the event of weather damage.

A levee breach along the Kankakee River in northwestern Indiana had local officials urging about 30 homeowners to evacuate.

Keener Township Volunteer Fire Chief Randy Woods said the breach was relatively minor when it was discovered about 3 pm Eastern on Friday near Demotte, which is about 50 miles southeast of Chicago.

Local residents tried to sandbag the breach ‘to get it under control, but it just got bigger and bigger,’ he said.

Local firefighters were called to help them, but eventually everyone had to pull out for their own safety. No injuries were reported.

The weather service said record flooding was occurring along the Kankakee following several days of heavy rains and snowmelt that sent streams out of their banks from the Ohio River to Michigan and Wisconsin.