Boris Johnson remains the overwhelming choice of Tory members to be the next party leader and prime minister despite a week of serious campaign setbacks, a new poll reveals today.

The former foreign secretary appears to have weathered the ongoing furore over what happened in a late-night altercation with his partner Carrie Symonds and an energetic campaign by rival Jeremy Hunt – who has branded him a coward.

The latest grass-roots ConservativeHome survey of members – who will decide the contest – found he was backed by 65 per cent and Mr Hunt 30 per cent – although the Foreign Secretary does seem to have gained some ground since the campaign kicked off for real.

In the equivalent poll last week, which featured the last four contenders including Sajid Javid and Michael Gove, Mr Hunt scored just 11 per cent.  But he has now risen 19 points.

Calm seas ahead? Boris Johnson appears to have weathered the furore over a row with partner Carrie Symonds 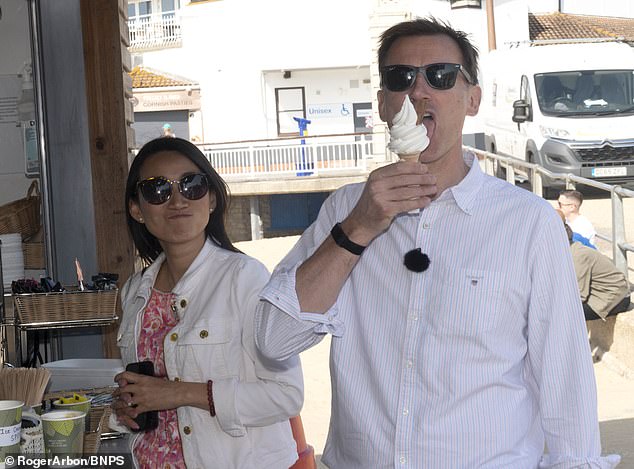 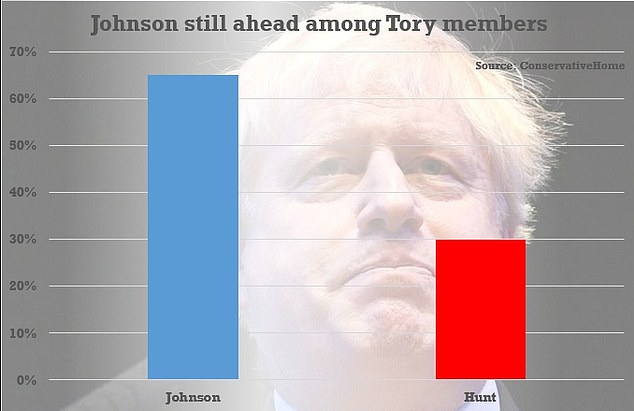 The latest grass-roots ConservativeHome survey found Mr Johnson was backed by 65 per cent, and Mr Hunt 30 per cent

An increasingly bullish Mr Hunt was joined by wife Lucia on an ice cream-fuelled day on the campaign trail today – the first time she has been seen since he launched his bid to be PM – as polls suggested he is gaining ground among voters in general.

An Ipsos Mori poll for the Standard today found Mr Hunt is regarded as having what it takes to become a good PM by 31 per cent of the public – while 42 per cent said the opposite.

Mr Johnson’s net rating was considerably worse on 34 per cent positive and 53 per cent negative.

But the bookies’ favourite has the advantage among Tory supporters, with 59 per cent thinking he has what it takes, compared to 53 per cent for Mr Hunt. 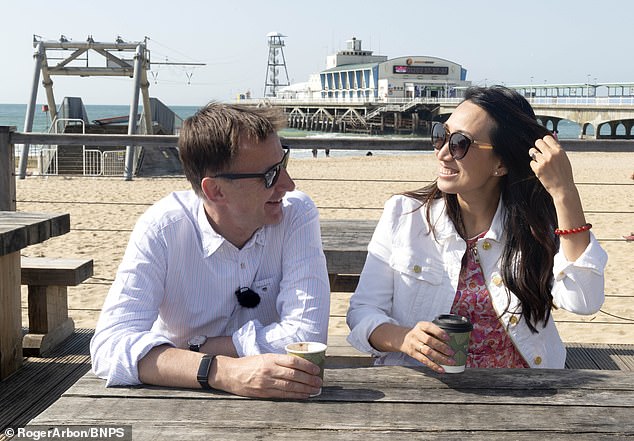 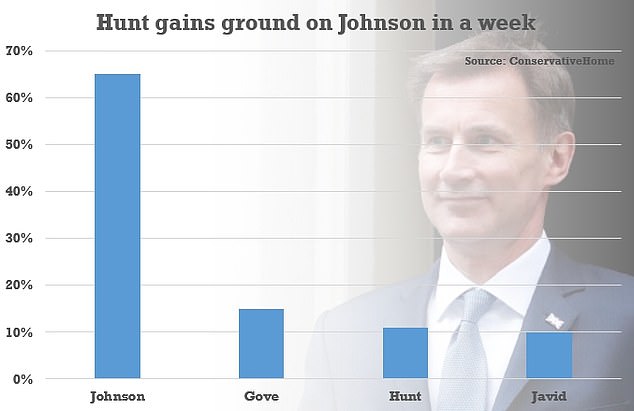 The would-be PM has been enjoying the sunshine in Bournemouth as he prepares for another hustings showdown with rival Boris Johnson.

Remainer MPs led by Tory Dominic Grieve and Labour’s Dama Margaret Beckett have launched a new bid to stop the UK from ever leaving the EU without a deal.

They have tabled an amendment, set to be voted on next week, which would stop a number of Whitehall departments from being given funding unless MPs have either agreed to a Brexit deal or agreed to the UK leaving the bloc without a deal.

Effectively, it would give MPs a veto over No Deal and the final say on how the UK leaves the bloc.

However, using departmental funding as leverage is likely to make some potential backers of the amendment queasy and may stop them from backing it.

MPs have already demonstrated that there is an anti-No Deal majority in the House of Commons, having previously won votes attempting to rule out such a split from the EU.

But the latest move is more aggressive than previous attempts and opinion is divided over whether enough Tory MPs will be willing to rebel to get it over the line.

If they do then it could represent a major headache for Boris Johnson if he is the next PM.

He has not ruled out suspending Parliament to stop MPs thwarting No Deal.

But if he tried to ignore the latest amendment, should it pass, it would likely spark a constitutional crisis.

The frantic pace the self-confessed ‘underdog’ has set in the battle for the keys to Downing Street seems to be delivering results. Polls today found he had improved his standing among voters and Tory supporters – although he is still lagging with party members.

Despite the positive signs, Mr Hunt’s other half looked less than impressed with his technique as he risked guzzling down his cone in front of photographers.

Mr Hunt has been running a high-energy campaign as he tries to overhaul Mr Johnson’s advantage in the contest.

He has travelled around 2,000 miles in the past week and made a slew of TV appearances, while relentlessly trolling his competitor about his unwillingness to face scrutiny.

Mr Johnson today tried to get his faltering campaign back on track by insisting anyone who serves in his Cabinet must vow to force Brexit through by Halloween.

The Tory front runner has said cutting ties with the EU by October 31 will be ‘do or die’, and made clear every minister must be ‘reconciled’ to leaving without an agreement if necessary.

The stark warning came amid confusion over whether Mr Johnson would be willing to suspend Parliament in order to stop MPs blocking No Deal.

Mr Johnson dodged when asked whether he would use the explosive tactic last night, but his close ally Liz Truss then insisted he had ruled it out.

The huge obstacles Mr Johnson faces have also been underlined by the emergence of another attempt by Remainers to take control of the process.

Today Mr Hunt vowed to protect free TV licences for the over-75s as it was revealed almost all those to be stripped of the perk would refuse to pay. 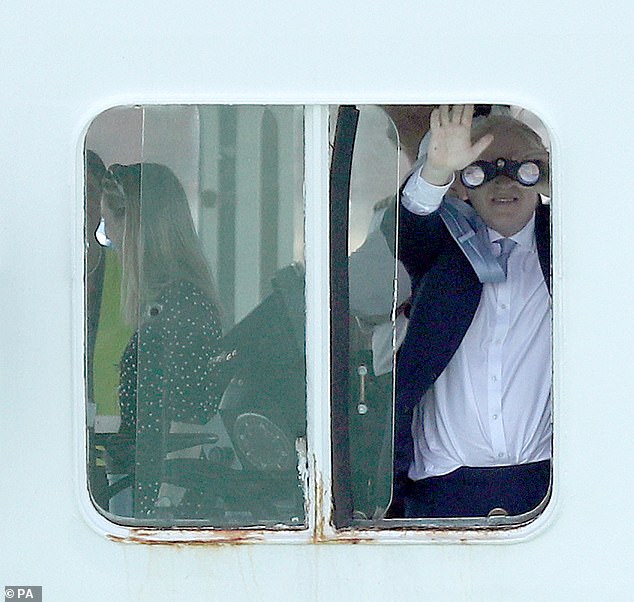 Riding a wave: Mr Johnson is the choice for party leader and prime minister of 65 per cent of Tory members 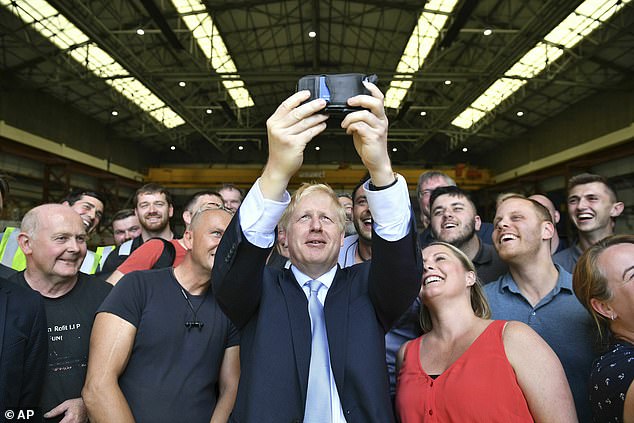 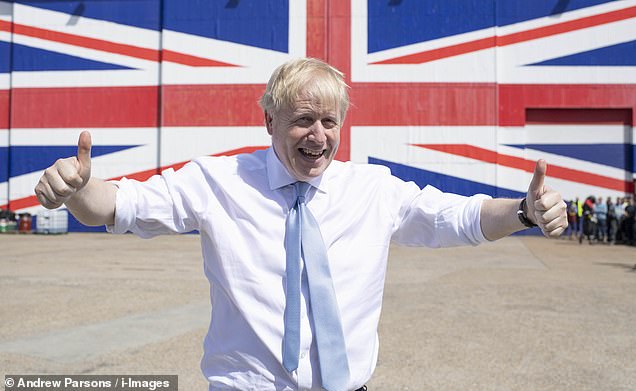 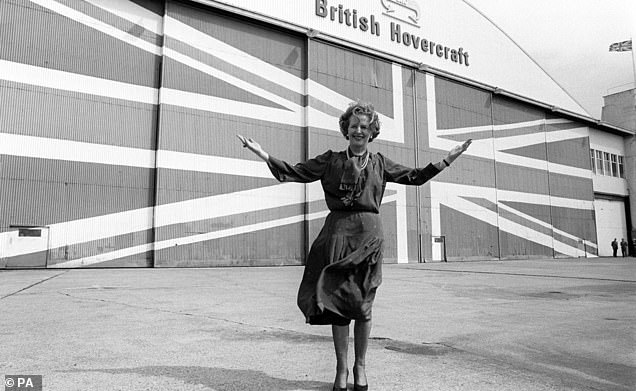 Anything Maggie can do…: Boris Johnson was on the Isle of Wight today where he posed in East Cowes, where Mrs Thatcher also posed for photos in 1983 (slide across to see the old photo) 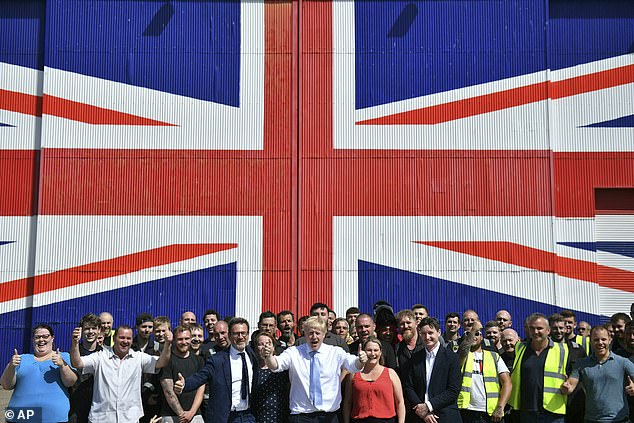 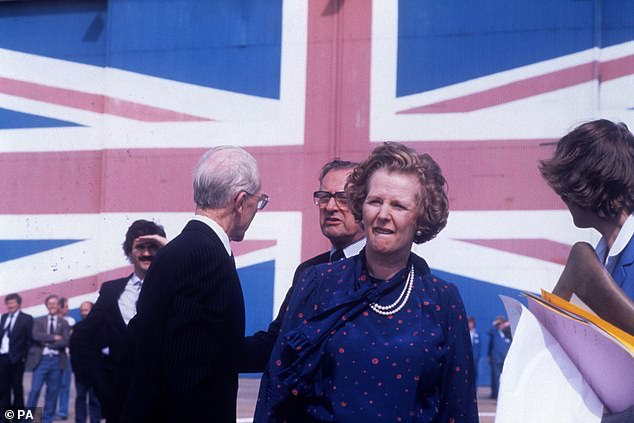 Amid growing fury about the scandal, the Foreign Secretary says he will ensure elderly people don’t have to pay the £154.50 if he wins  the race to be PM.

A new poll released today says that 85 per cent of over-75s would rather go to court than pay it.

And more than one million people have signed two online petitions opposing the move with pensioners holding protests outside BBC buildings around the UK.

Mr Hunt last night pledged to ‘honour’ his commitment for the over-75s if he comes out on top of the Tory leadership contest. 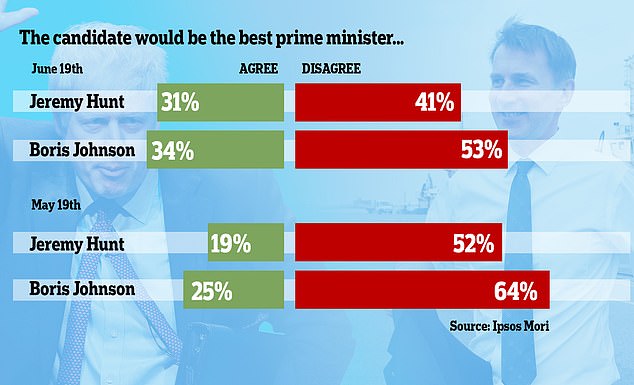 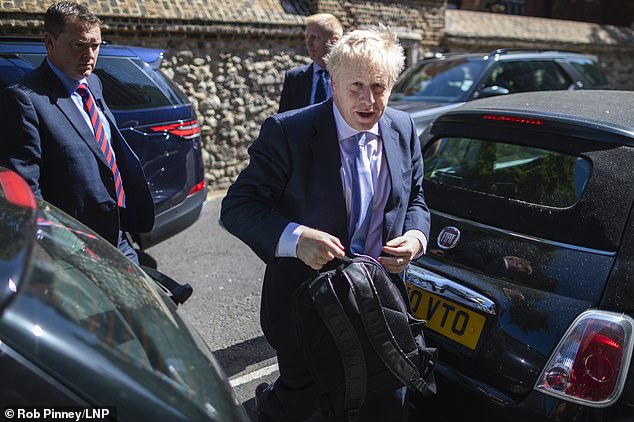 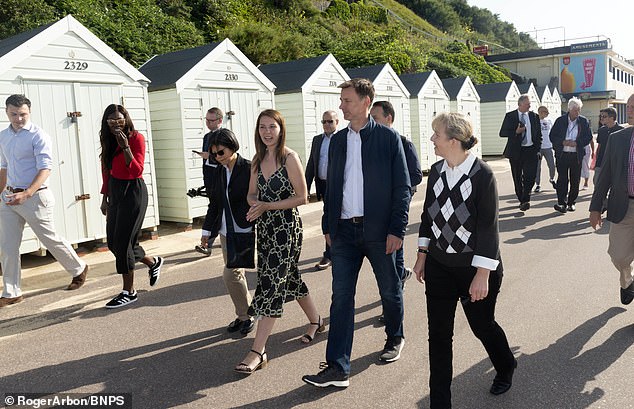 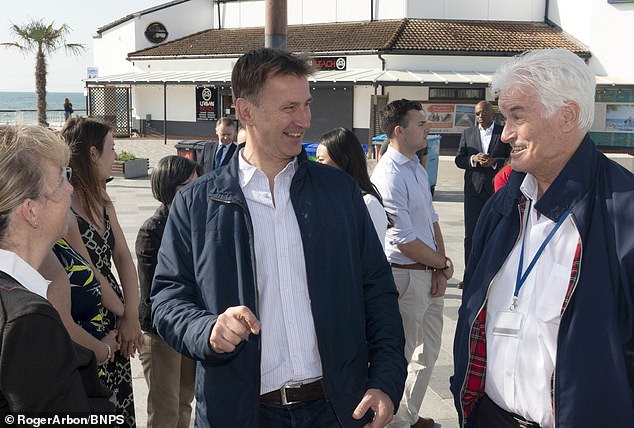 Japan’s Foreign Minister has warned that Britain leaving the EU without a trade deal could threaten the UK’s automotive industry.

Tarō Kōno today said that a No Deal exitwould have ‘very negative’ consequences for more than 1,000 Japanese firms operating in the UK.

He told the BBC’s Today show on Radio 4 that he was concerned that a lack of trading agreement would mean longer inspections for car parts and other goods coming to the UK from other European countries.

‘Right now they have a very smooth operation,’ he said. ‘They are stuck, for each part, only for a few hours.

‘But, if there’s a No Deal Brexit and if they have to go through actual customs inspections physically, those operations that may not continue.’

‘Many companies are worried about implication because they don’t know what’s going to happen,’ he added.

‘Whenever we had a meeting, that was one of the major issues – please… no no-deal Brexit,’ he said.

It came as Tory leadership favourite Boris Johnson today insisted anyone who serves in his Cabinet must vow to force Brexit through by Halloween.

Boris Johnson today insisted anyone who serves in his Cabinet must vow to force Brexit through by Halloween – as Remainers plot a new bid to block No Deal.

The Tory front runner has said cutting ties with the EU by October 31 will be ‘do or die’, and made clear every minister must be ‘reconciled’ to leaving without an agreement if necessary.

The stark warning came amid confusion over whether Mr Johnson would be willing to suspend Parliament in order to stop MPs blocking No Deal. Mr Johnson dodged when asked whether he would use the explosive tactic last night, but his close ally Liz Truss then insisted he had ruled it out. 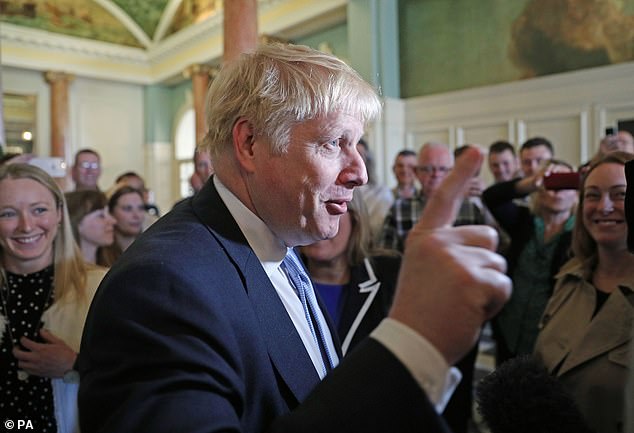 The huge obstacles Mr Johnson faces have also been underlined by the emergence of another attempt by Remainers to take control of the process.

A group led by Tory former Cabinet minister Dominic Grieve is set to force a crunch vote next week on an amendment that would effectively bar the government from taking the UK out of the bloc without consent from the Commons.

Downing Street said the move would be ‘grossly irresponsible’.

‘Any attempt to deny vital funding to Whitehall departments would be grossly irresponsible,’ a spokesman said.

‘This is government spending for this financial year and funds crucial areas like schools, housing and welfare.’

May warns Boris over forcing No Deal through Parliament

Theresa May today urged her successor as Tory leader to pursue a negotiated Brexit deal – and not suspend Parliament to force through No Deal.

In a significant intervention, Mrs May said she ‘hopes and expects’ that her successor will put a new proposal to MPs for them to vote on. She said it will be up to them to ‘find the majority in Parliament that I was not able to find’.

Her comments came in response to a question about Boris Johnson’s refusal to rule out using executive powers to ‘prorogue’ Parliament.

Brexiteers say this nuclear option could stop MPs from blocking a government intent on pursuing No Deal. Although Mrs May was careful not to take sides in the leadership contest, her remarks will be seen as a tacit rejection of the idea Parliament might be suspended.

Mr Johnson again refused to rule it out in a Conservative hustings on Wednesday evening but his supporter Liz Truss insisted the former foreign secretary would not pursue such a plan.

Mr Hunt has explicitly said he would not go down that route.