Bob Seely warned there could be an ‘exodus’ from the former British colony amid fears the legislation will be used against pro-democracy activists.

China insists the legislation, set to be passed on Thursday, is necessary to protect national security.

Hundreds of protesters with banners march along a downtown street during a pro-democracy protest against Beijing’s national security legislation in Hong Kong, Sunday, May 24, 2020

Mr Seely, Tory MP for the Isle of Wight, said Hong Kong faces a crisis and Britain should offer sanctuary to those fleeing.

He wrote on the Conservative Home website that British National Overseas (BNO) passport holders and democracy activists who do not have BNO status should be fast-tracked for UK citizenship.

Mr Seely wrote: ‘The possibility of a mass flight from Hong Kong may become one of those rare occasions where mass asylum in the UK is morally right, as it was with ethnic Indians in Uganda expelled by that country’s insane dictator, Idi Amin, and accepted by the UK and others in 1972.’

Britain should work with the US, Australia and Canada to provide ‘long-lasting places of sanctuary’, he said.

He added: ‘It would be a stain on our country’s reputation if other nations were to open their arms, metaphorically speaking, to Hong Kong BNO folk in their hour of need before the UK did so.’

Mr Seely and other Tory MPs have asked for a Government statement over the rights of BNO passport holders, who do not have an automatic right to live or work in this country.

Pro-democracy activists in Hong Kong have also called on Britain to take a tougher stance against Beijing, and have warned they could face charges of subversion or terrorism under the new security law.

Chris Patten, now Lord Patten, the final Governor of Hong Kong before the handover, said Britain needed to be ‘more generous’ towards BNO passport holders and to allow those facing the greatest threat to come here. 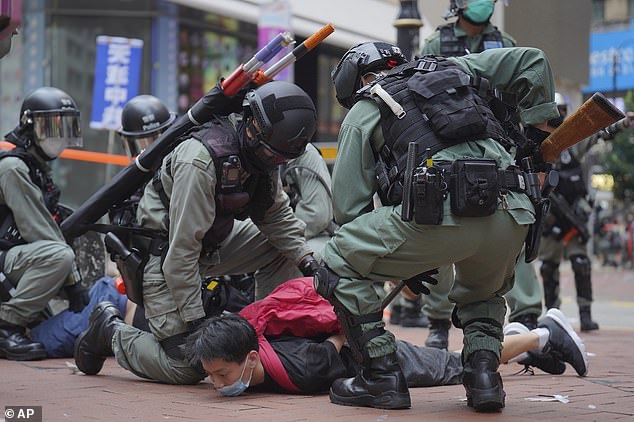 Riot police detain a protester during a demonstration against Beijing’s national security legislation in Causeway Bay in Hong Kong, Sunday, May 24, 2020

Tom Tugendhat, who chairs the Foreign Affairs Committee, said Britain must support its nationals in Hong Kong, adding: ‘We must stand up for their rights and offer them sanctuary if they need it.’

China defended the new security law. Its Foreign Commissioner in Hong Kong, Xie Feng, said it would only target those who posed an ‘imminent danger’ to national security.

He said: ‘The legislation will alleviate the grave concerns among local and foreign business communities about the violent and terrorist forces.’ The US has threatened to withdraw Hong Kong’s preferential business trading status if the new law is implemented.

China’s foreign ministry spokesman Zhao Lijian said: ‘If the US insists on hurting China’s interests, China will have to take every necessary measure to counter and oppose this.’