Conservative MPs have been placed on a war footing for the first week of the new prime minister’s term in office amid fears that opposition parties and and rebel Tories will immediately try to topple their government.

Chief Whip Julian Smith has told MPs they are on a three line whip – meaning they must attend and ready to vote with the Government – in the week beginning July 22.

The new prime minister – either Boris Johnson or Jeremy Hunt – is expected to be unveiled on July 23 and enter Downing Street the following day.

In an email to Tory MPs, seen by Sky News, Mr Smith said: ‘As reported over the weekend, there is a possibility that the official opposition will table a confidence motion that week.

‘It is vital that we make sure that this is defeated.’

It comes after a minister warned that around a dozen hardcore Remainer Tories could rebel and vote against the confidence motion.

They want to block any attempt by the new prime minister to lead the UK down the path to a No Deal Brexit.

The Government does not have an overall majority and 12 could be enough to swing the result against it.

Chief whip Julian Smith told MPs that a confidence vote was possible, saying: ‘It is vital that we make sure that this is defeated’ 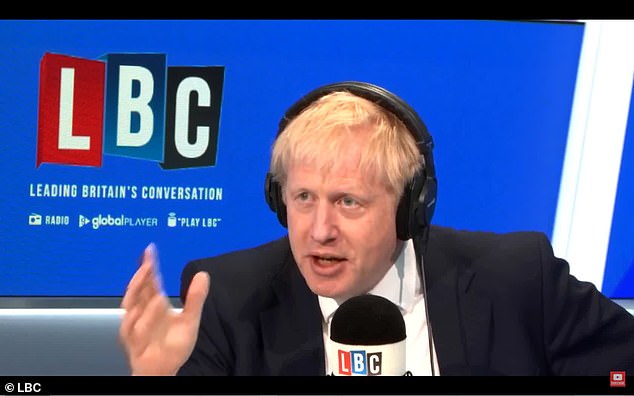 Boris Johnson, pictured speaking on LBC this morning, looks likely to be the winner of the Tory leadership race and the new prime minister

If the Government loses the vote it has two weeks to try to form a new administration or a General Election is called.

The Conservatives are concerned that there is a chance the door has been left ajar for Jeremy Corbyn to enter power in the chaos.

One Tory MP told MailOnline: ‘It’s terrible. It’s like being on the Titanic after you have already hit the iceberg and arguing over how many lifeboats you should lower down and which side you are going to lower them on.’

The former chancellor said he would not back any administration which tries to  ‘pursue policies which are totally incompatible with everything the Conservative Party has stood for’ since he became an MP in 1970.

Mr Clarke told the BBC that the vote might ‘trigger a change of government’, with or without an election.

Mr Johnson – the favourite to become PM – today vowed not to ‘bottle’ leaving the EU in October – despite warnings that least a dozen Tories are willing to torpedo his government if he tried to force No Deal.

Asked by the BBC what he would do if Labour put forward a confidence motion, Mr Clarke said: ‘It depends on the circumstances at the time and what whoever is prime minister is putting forward as the policy he is going to pursue.

‘But I am not going to vote in favour of a government that says it is going to pursue policies which are totally incompatible with everything the Conservative Party has stood for under all those prime ministers for the decades that I have been in Parliament.’ 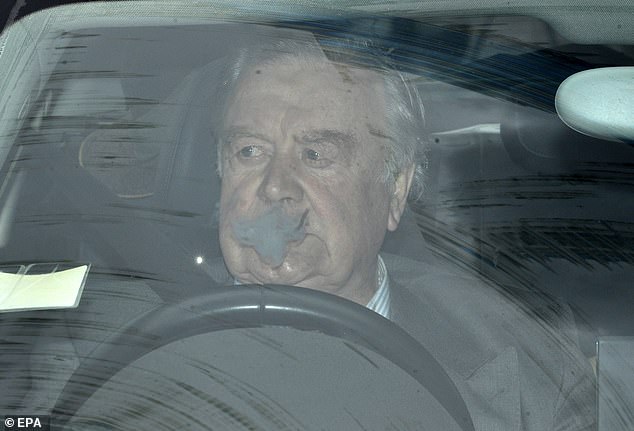 Smoking gun: Mr Clarke threatened to vote with Labour to bring down the Government and block a No Deal Brexit

Would-be PM Mr Johnson has said the UK had to be out by Halloween ‘come what may’, urging his colleagues to keep their ‘eyes on the prize’.

In an interview for the BBC’s Panorama, broadcast last night, Mr Ellwood said: ‘I think a dozen or so members of Parliament would be on our side, would be voting against supporting a no deal, and that would include ministers as well as backbenchers.’

Former Cabinet minister John Nott suggested that Mr Johnson was only pretending to want an agreement with the EU, and would prefer to leave without. 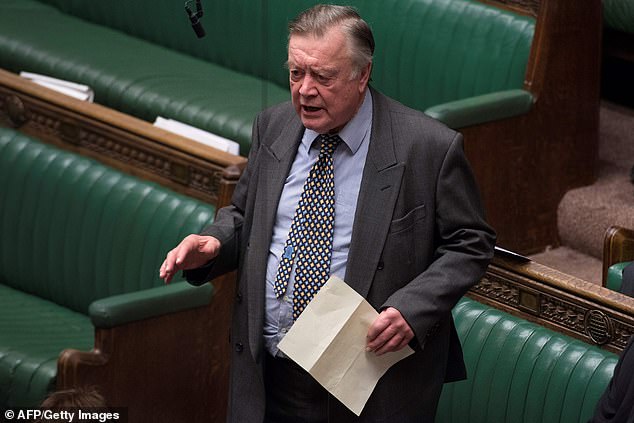 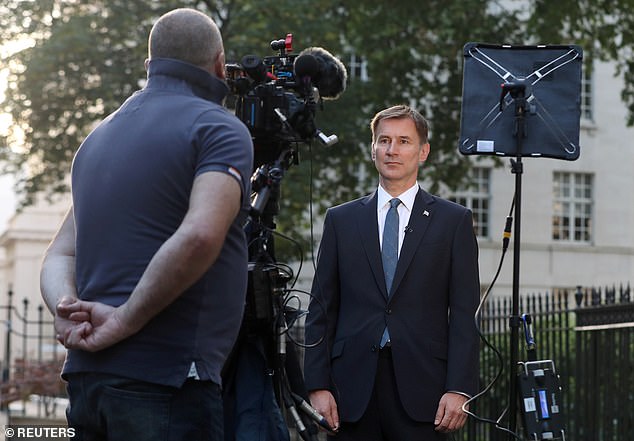 Jeremy Hunt (pictured giving an interview in London today) accused Mr Johnson of trying to ‘slink through the back door’ of No10, saying he was a ‘coward’ to avoid a live TV debate with him this week 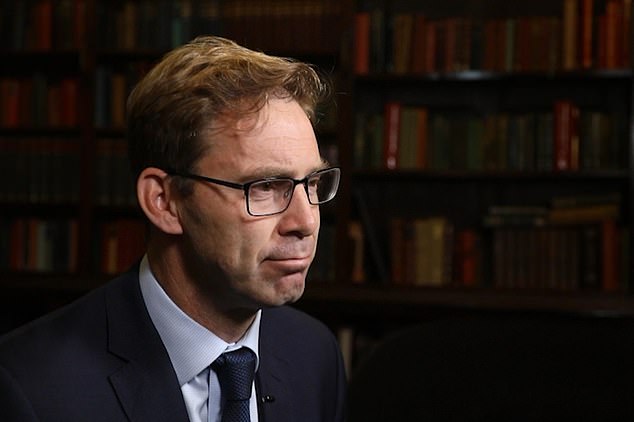 In a BBC Panorama special, defence minister Tobias Ellwood said he believed ‘a dozen or so’ Tories are ready to take the ‘nuclear option’ – more than enough to collapse the government