‘The board needs to consider its own role in this… is the manager solely accountable?’: Tottenham Hotspur Supporters’ Trust questions Daniel Levy after shock sacking of popular manager Mauricio Pochettino

Tottenham Hotspur Supporters’ Trust have questioned the club’s role in Mauricio Pochettino’s downfall and urged them to go public with their plans.

Spurs fans were left stunned by the dismissal of popular manager Pochettino on Tuesday night after five-and-a-half years at the helm.

The Argentinian transformed Spurs from a Europa League side to title challengers and Champions League regulars during his reign, leading them on an unforgettable journey to last year’s final in Madrid, the first in the club’s history.

A THST statement read: ‘We’re shocked and saddened to hear our club has sacked Mauricio Pochettino and his coaching staff.

‘During his time at Spurs, Poch gave us many of our best moments as supporters, made Tottenham Hotspur a force to be reckoned with again, and forged a strong link with the fans. We will never forget the joy he brought us.

‘Of course, results in the league have been disappointing for some time. But many fans thought Poch had earned the right to turn it around in the first sustained period of poor form we’ve had during his time at the club. We now have to look forward and take stock. But there are questions that must be asked of the board of THFC.

‘The club’s statement makes it clear the board has decided to sack the manager and coaching staff. It is their decision. We question why this decision was taken at the end, rather than the beginning, of the international break. We question whether the timing of the decision leaves the club with much choice in who takes over. 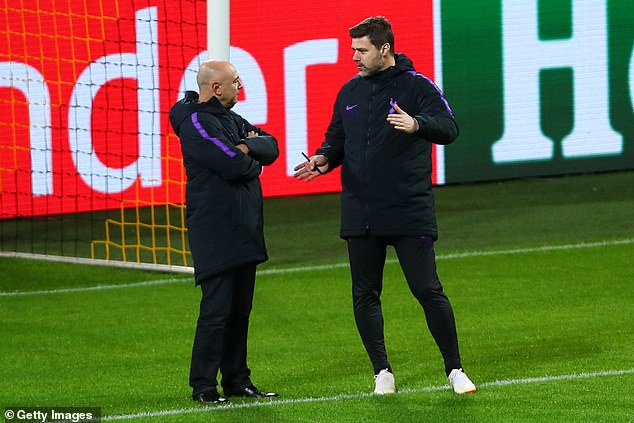 ‘To take the decision it has, the board must have a clear plan for what and who comes next. It needs to tell this club’s supporters what that plan is. And the board also needs to consider its own role in this.

‘Is the manager solely accountable? How much has the board’s line on wages and transfers contributed to player unrest and disaffection? How much did it contribute to the situation we now find ourselves in? And will it change to help support a new manager?

‘We’d like to put on record our thanks to Mauricio Pochettino, Jesus Perez, Toni Jiminez and Miguel D’Agostino for the fantastic football and magical moments they have brought us over the last five years.’